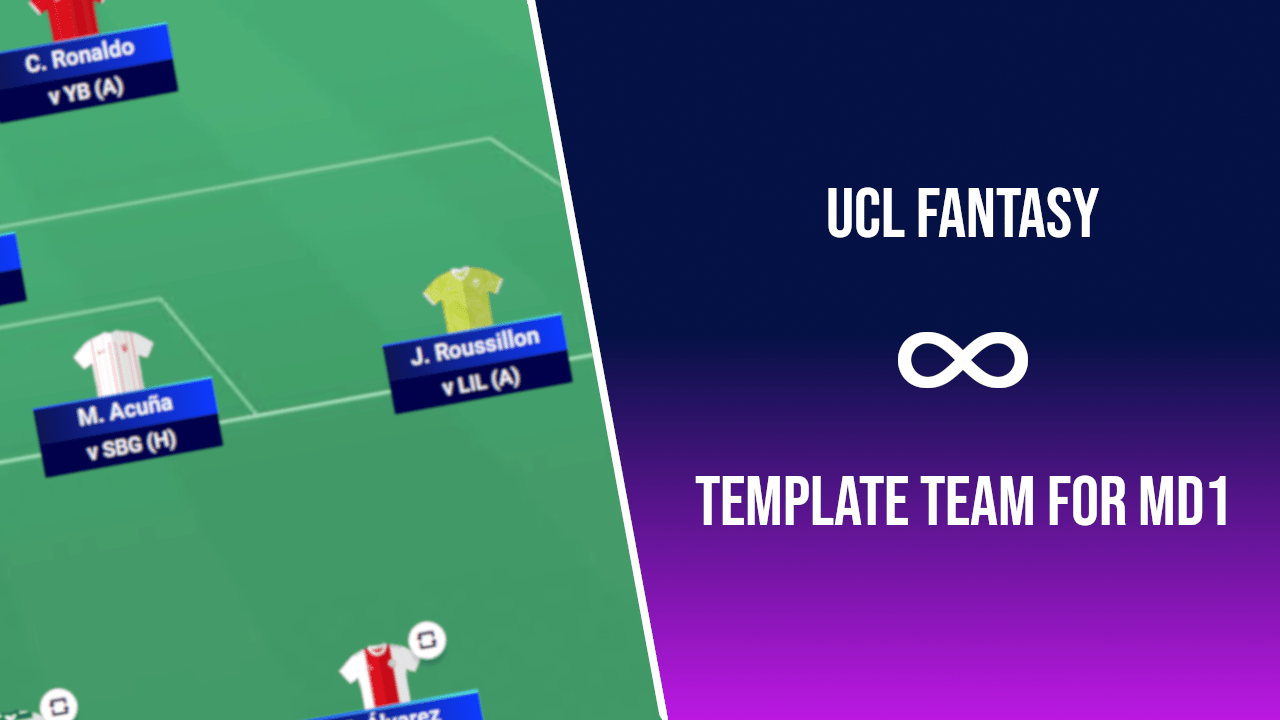 Just four days remain for UCL Fantasy and in our latest article, we look at the must-have players from goal-scoring machine Erling Haaland to budget-buster Jérôme Roussillon and the template team for matchday 1.

The 21-year-old Norwegian wunderkind is a force to be reckoned with as he scores goals for fun but his record in the Champions League is even more impressive as he has more goals than games played with 20 goals in 16 games. Despite the absence of Jadon Sancho with whom he created a formidable duo, Haaland has had a stellar start to the season with three goals and three assists in the same number of Bundesliga games so far. He took the golden boot honours for last season’s tournament scoring 10 goals and was the highest-scoring forward in fantasy with 62 points and with a group consisting of the likes of Beşiktaş, Ajax and Sporting CP, you can expect the Borussia Dortmund starlet to top the goal-scoring charts again.

This man needs no introduction. The leading goal-scorer in UCL history with 134 goals is back at “The Theater of Dreams” where he first built a name for himself as “CR7” in what seems like a fairytale move. Although he did not have the best tournament last time out by his standards with four goals in six games, he will be highly motivated to make a big statement in his homecoming for Manchester United. Ronaldo now has a star-studded cast consisting of Fernandes, Pogba and Shaw to name a few that will help him add more goals and records to his name. The 36-year-old might not have age on his side but he is still one of the best players in the world currently and doubt him at your own risk with games against Young Boys and Villareal to start the European campaign.

Another big name that has returned to his old club for a second stint, Lukaku is back with European champions Chelsea and is fresh off his best season ever where he scored 24 goals and assisted 11 in just 36 games for Inter Milan in the Serie A to win the best overall MVP award. He did score four goals in just five UCL games last season but Inter were unfortunately knocked out in the group stages after some final day drama when they were held 0-0 at home by Shakhtar Donetsk finishing fourth behind them. A prolific striker was the only concern that the team had and with the reintroduction of Lukaku, Chelsea now have the perfect squad to help them defend their title this year.

Liverpool might not have the best of groups with Serie A runners up AC Milan, Primeira Liga runners up FC Porto and La Liga champions Atlético Madrid but Salah remains one of the most explosive players in fantasy and was third for points scored in 20/21 with 63 points for his six goals and one assist despite being knocked out in the quarter-finals. He is the pick of the premium midfielders again as most of the players in the same range are either injured or out of form and you can always count on him to score goals as he is one of the most fixture proof players there is.

Reus might’ve flown under the radar so far but the Dortmund captain has seemed to buck his downward trajectory over the past few seasons and looks a lot more like the dangerous player that he was back in 18/19 when he had 17 goals and 8 assists in 27 games under new coach Marco Rose. The reward for his improved performances has been his return to the German national team and he could be a great bargain at €8M especially if Reyna is out.

Few defenders in UCL Fantasy are as consistent as Hummels when it comes to generating bonus points. The BVB stalwart was second in ball recoveries (79) only to Van Djik in 19/20 (81) and to Romero in 20/21 (85+ compared to Hummels’ 75 recoveries). His high floor combined with his goal threat from corners and clean sheet potential in a group that could be a jackpot for points in fantasy makes him a fantastic option at €5M.

The competition for defenders within €4.5M isn’t fierce but Sevilla’s defensive duo of Marcos Acuña and Diego Carlos are two standout names in that range with the former having more attacking potential and the latter being better at ball recoveries. PSG’s latest signing Nuno Mendes was listed in the game at €4.5M when he was still with Sporting CP and could be an even better option for that price if he does start for “The Parisians.”

Wolfsburg are back in the UCL after a five-year hiatus and have made a strong start to the new season after winning each of their three games and having conceded just one goal so far which was a penalty and are currently top of the table in the Bundesliga. The team possess one of the best defences in the league and were second only to Leipzig for goals conceded in 20/21 so a defender from the club for €4M is a potential gem in a group that consists of RB Salzburg, LOSC Lille and Sevilla.

Rousillon has better odds to keep a clean sheet than other enablers but Maximilian Wöber and Oumar Solet are also worth a shout because of their bonus point potential from ball recoveries.

The arrival of Thomas Tuchel has turned Chelsea into a resolute defensive unit with the team keeping the most clean sheets in the tournament last year with 9 and conceding just 2 goals in 13 games. There is great value to be found in one of the best backlines in the world and even though players like Reece James, Ben Chilwell and Marco Alonso have more attacking flair, they are uncertain to start and Azpilicueta although not immune from rotation himself, should play most of the games and is the cheapest defender expected to start from the club at €5M and should get plenty of points if he does start in a lopsided group that consists of Juventus, FC Zenit and Malmö FF.

Managers who played Euro Fantasy this year will be familiar with how good Joakim Mæhle is. The Danish full-back was one of his country’s standout players in their run to the semi-finals with two goals and an assist in six games. On a club level, he plays for one of the most dangerous attacking teams in Atalanta and is one of the most attacking full-backs one can buy in UCL Fantasy for €5M. Counterpart Robin Gosens is also worth a mention as he had 11 goals and 6 assists for the teams despite being a defender and should be worth the extra €0.5M for him. Atalanta play Villareal and Young Boys in their first two games so a defender could certainly be worth the punt.

The are plenty of keepers to choose from within €4.5M and although Dortmund keeper Gregor Kobel might be a better pick, that third BVB spot is better spent elsewhere. Atalanta keeper Musso offers a solid alternative to Kobel for the same price and is expected to be the most popular choice among “sharks” along with Beşiktaş J.K. keeper Ersin Destanoğlu who costs just €4M. 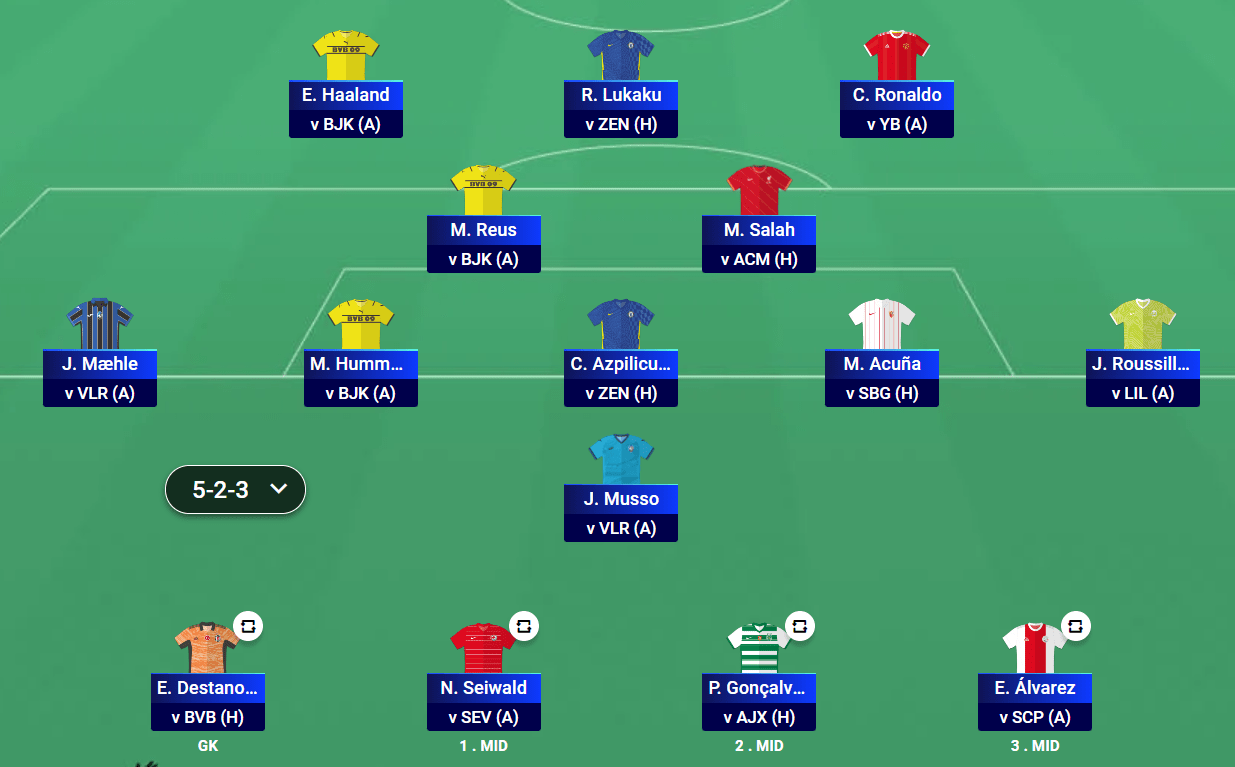 Bench and other alternatives:

You can find UCL Fantasy resources for the 21/22 season here.