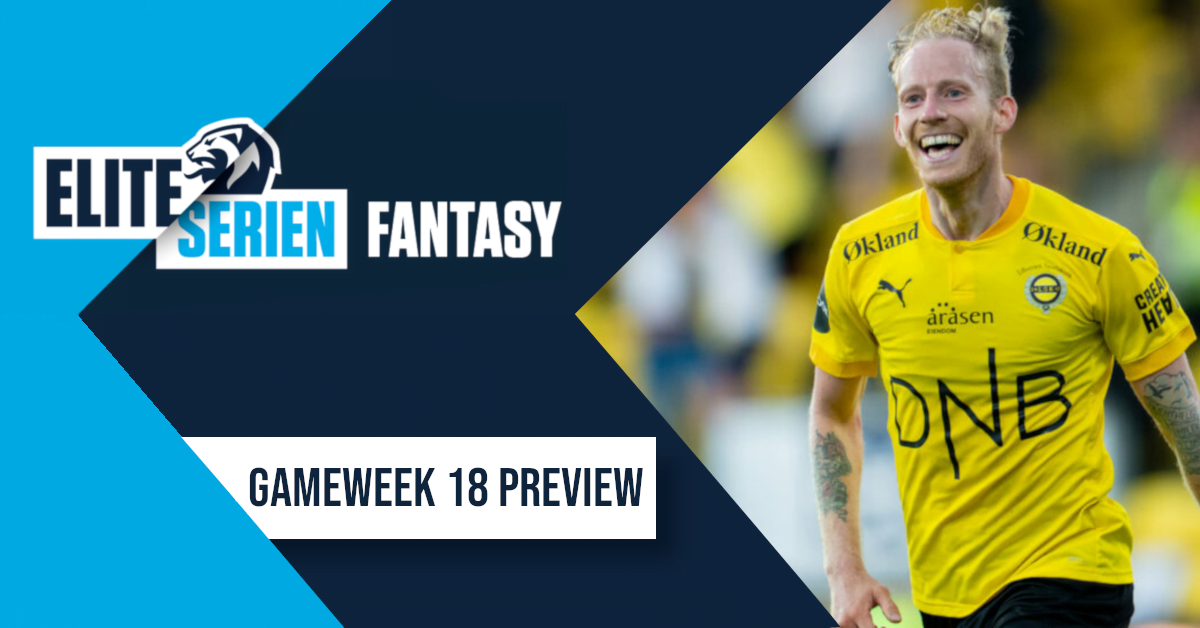 With the transfer window now closed, Tipster Jacob Silkstone analyzes the best new signings to consider and shares his player picks for gameweek 18 in Fantasy Eliteserien.

After a couple of below-par weeks (blame laid squarely at the feet of Fred Friday), we finally managed to nail the captaincy call: Amahl Pellegrino chipped in with a goal, an assist and a bonus point (and a yellow card) in the North Norwegian derby, for a total of 20 captain points. Budget forward Aune Heggebø and mid-price midfielder Kristoffer Velde both provided attacking returns; we correctly backed Sarpsborg to keep a clean sheet at home to Sandefjord, but unfortunately, our pick (Joachim Thomassen) missed out with a late injury. One result we really didn’t see coming was Molde’s 2-0 defeat away to Kristiansund, which throws the title race wide open. Defending champions Bodø/Glimt have retaken the lead, with newly-promoted Lillestrøm now just one win off top spot.

Transfer deadline day fell just after the end of GW17: while the eyes of the world were on Ronaldo’s move to Manchester, Fantasy Eliteserien players will be more concerned about whether Zdeněk Ondrášek (7.5M) can rediscover anything resembling his previous form as he begins a second spell at Tromsø. Ondrášek is a club legend, and a potential fantasy bargain. With an away game against Rosenborg first up, we can probably afford to wait a week before bringing him into our squads. In the meantime, here are five summer transfer window arrivals you should be considering right away:

Amahl Pellegrino (still available for 12.0M, but surely not for much longer) is the obvious first pick, if you don’t have him in your squad already. He was close to winning the Eliteserien golden boot at unfashionable Kristiansund, and he’s now the spearhead of Norway’s most potent attack. Even though he’s one of the most expensive players in the game, it would be dangerous to bet against him.

Martin Linnes (6.0M) is classified as a defender in the game, but can also play on the wing. In his last spell at Molde, he contributed 14 goals and 26 assists in 153 games. Similar numbers this time around would make his price look like a bargain.

Mikkel Maigaard (7.9M) finds himself in the midst of a relegation battle at Sarpsborg. His new team are beginning to show some signs of hitting top form, at last, putting five goals past Sandefjord in GW17, and Maigaard is likely to play a key role in their attack. He was second in the division for key passes last season, finishing with nine assists.

Moses Mawa (7.3M) has scored ten goals across the last two Eliteserien seasons, but only one this time out. That goal game on his home debut for new club Kristiansund, illustrating his role as the focal point of their attack. If you’re looking for a mid-priced striker with low ownership and high potential, he could be the one…

Finally, ex-Brann and Sogndal midfielder Gilbert Koomson could make his 9.5M price tag look cheap if he can secure a regular starting spot for Bodø/Glimt. Even with limited minutes in his last Eliteserien season, he provided eight goals in a struggling Brann side.

After regular custodian Mads Hedenstad Christiansen broke his wrist while training with the under-21 national team, Knut-André Skjærstein (4.5M) is ready for his Lillestrøm debut at home to relegation candidates Brann. Having conceded just three in their last five home games, Lillestrøm provide keeper clean sheet potential at a bargain price this week.

Molde are out of Europe and able to focus solely on regaining the lead in the title race, so we’re backing them to emerge victorious against a Mjøndalen side that haven’t won away since GW3. Martin Linnes (6.0M) is the most attack-minded route into their defence.

We’re bringing Rosenborg’s Adam Andersson (5.9M) back into our selection ahead of a home game with relegation-threatened Tromsø. Rosenborg are also free to focus solely on the league now, and Andersson returned two assists and maximum bonus points in the reverse fixture.

First-choice centre-back Brede Moe (4.9M) offers a cut-price route into the league’s strongest defence as Bodø/Glimt prepare to host Odd. The visitors have failed to score in either of their last two games, and it’s also worth noting that Moe has never gone through an Eliteserien season without providing at least one attacking return… We’re still waiting this year. Unfortunately, the depth of Glimt’s defensive options means he isn’t a nailed-on starter every week. His centre-back partner Marius Lode is available at exactly the same price, with pretty much exactly the same rotation risk.

Just the 29 fantasy points for Amahl Pellegrino (12.0M) from his first one and a half appearances in a Bodø/Glimt shirt… At the moment, he’s averaging a shade over 21 points per 90 minutes. While no one’s suggesting he can maintain that implausible ratio, he’s close to an automatic choice against a defence that shipped five goals in their last away game.

Gjermund Åsen (8.1M) is the second of our three Lillestrøm picks as the surprise title challengers prepare for a very winnable game against scandal-hit Brann. The ex-Rosenborg midfielder has ticked along with one goal and three assists from his last five home games, and has more bonus points this season than the rest of Lillestrøm’s midfielders (all twelve of them) put together.

We’re keeping our faith in Ole Brynhildsen (7.9M) as a mid-priced route into the Molde midfield. Opponents Mjøndalen have now gone seven games without a win, and Brynhildsen remains Molde’s highest-scoring midfielder so far this season.

Rosenborg’s summer signing Olaus Skarsem (5.9M) may be an unfashionable budget midfield pick, owned by just over 1%, but he already has a goal and an assist for his new side and could add to his total in what should be a relatively straightforward home game against Tromsø. At his price, he’s worth a punt.

We start our three-man strikeforce with a classic piece of points chasing. We’re probably recommending Sarpsborg’s Ibrahima Koné (7.6M) a week too late: his four-goal haul against Sandefjord last time out will almost definitely remain the highest fantasy points score of his entire career. But… it seems unwise to ignore the league’s most in-form striker against a Haugesund defence that have conceded an eye-watering 13 goals in their last 4 games.

In stark contrast to Koné, Ohi Omoijuanfo (12.2M) blanked last gameweek. That was a rare off-day for the league’s top scorer: he has a frankly intimidating total of ten goals in his last five home games, and it’s unlikely that the Mjøndalen defence will be able to keep him out. He takes the captain’s armband for us this week.

Finally, Thomas Lehne Olsen (9.6M) completes our trio of Lillestrøm players. With five goals and two assists in his last six games, he remains one of the most in-form players in the league. Meanwhile, Brann have kept just one away clean sheet all season.

Fantasy Eliteserien Team of the Week for Gameweek 18 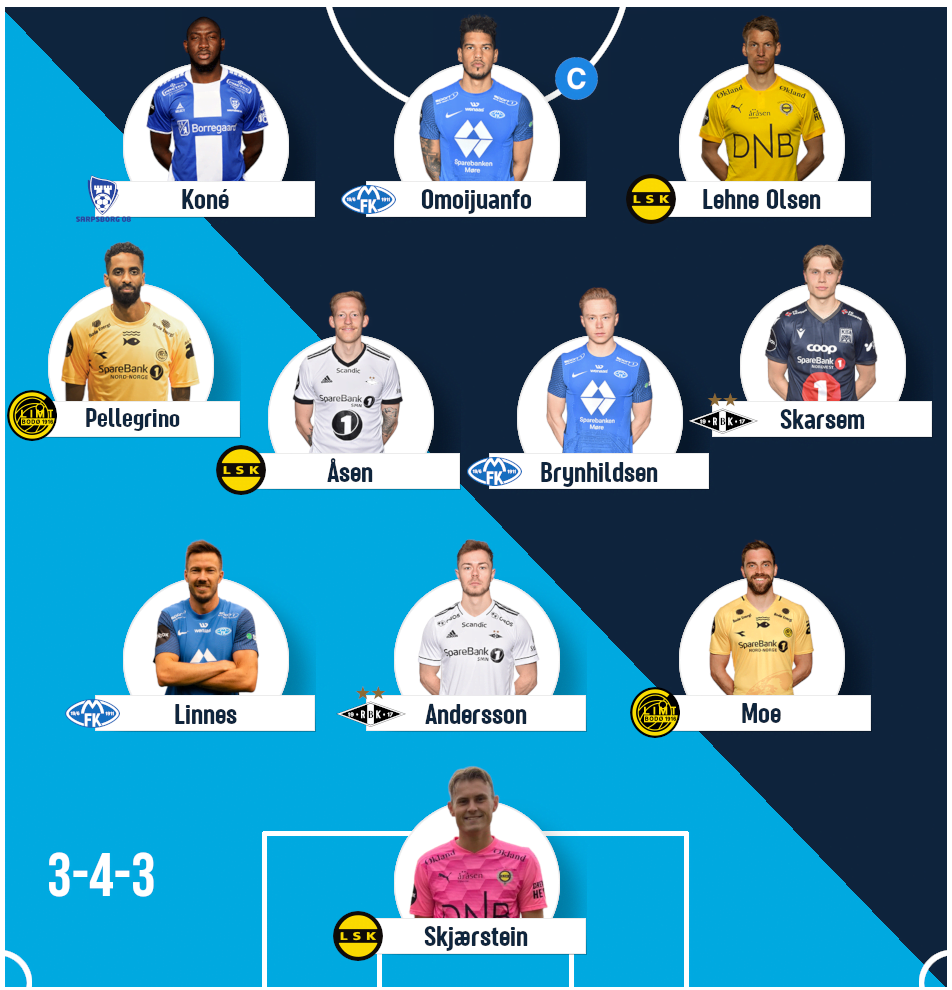