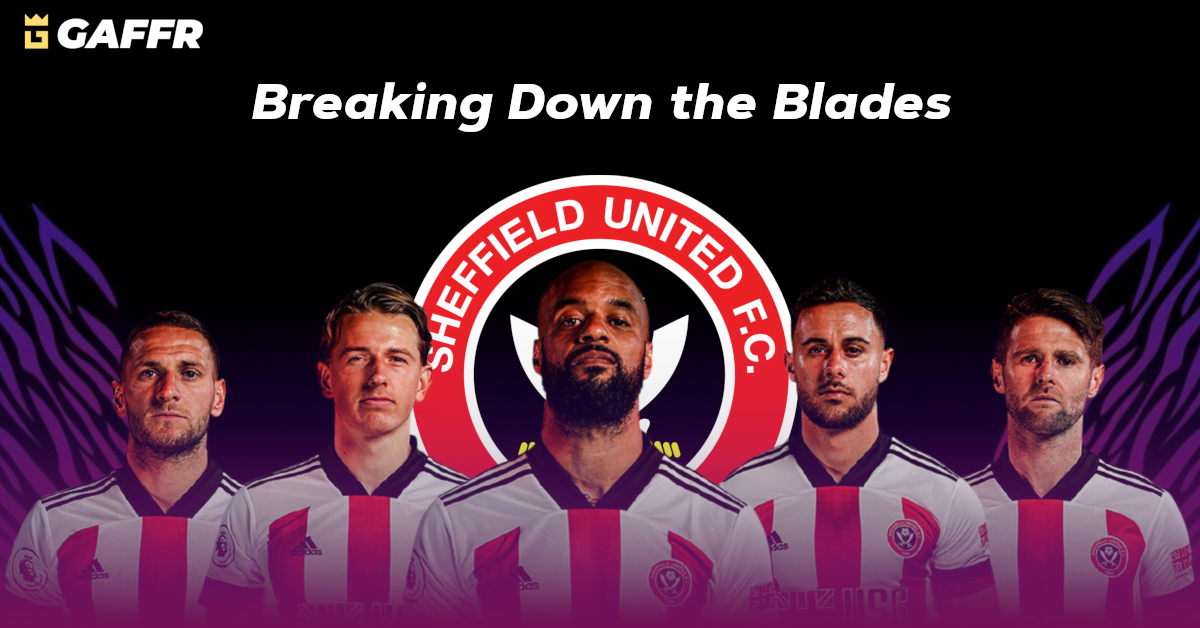 With the beginning of the new Championship season right around the corner now seems like the perfect time to go into an in-depth breakdown of one of the new teams to GAFFR this season. That side being recently relegated outfit Sheffield United aka “The Blades.”

Sheffield United had a tough start to the 2010s in which the club was relegated to League One, English Football’s third-tier for the first time since 1989 but after Chris Wilder took over in 2016, The Blades had a rapid turn in fortunes achieving two promotions to reach the Premier League in just three years. United’s first season in the top flight was one that Blades fans couldn’t have dreamed of, seeing the club battle it out for European places before suffering a poor end to the season after the restart. However, in the 2020/21 season, Sheffield United never found form and were relegated comfortably.

This campaign, under new blood for the first time in five years the Blades will look to push for promotion back to England’s most prestigious league.

The goalkeeping department could be either the easiest or the hardest position when it comes to selecting a Sheffield United player, if Aaron Ramsdale was to leave the club the position would be a toss-up between both £5.5M GKs, however, it seems increasingly likely that the Blades will be able to keep a hold of Ramsdale which would make him the club’s clear #1 goalkeeper.

In the 2018/19 Championship season when United were promoted they were renowned for their strong defence, keeping 21 clean sheets and also managing another 13 shutouts in the 2019/20 Premier League season. Without the disruption of injuries and covid, the Blades look like a great bet to pick up a high number of clean sheets this time around, making Ramsdale a great choice for your GAFFR team.

In defence is where things start to get complicated as far as Sheffield United options go. For starters, it is unknown how the Blades will even line up. When Slaviša Jokanović first took over as manager it seemed like the 5-3-2 left behind by Chris Wilder would stay in use, however, in a recent pre-season friendly Jokanovic experimented with a 4-3-3/4-3-1-2 to great effect. The fullback positions remain up in the air with both Jayden Bogle and George Baldock battling for the RB slot while Ben Osborn who is listed as a midfielder in GAFFR is likely to start the campaign at left-back ahead of Enda Stevens who is suffering from a fitness issue.

Out of all the options, John Egan is the only one I’d say is nailed with Jack Robinson also having a good chance to start alongside Egan at CB. If the Blades do play with a 5-3-2 both Chris Basham and Robinson would be nailed however there is too much uncertainty at the moment. Jayden Bogle is likely the most attacking option, having collected more xG per 90 than any other Blades defender last season (0.16).

While there is a decent quantity of options in midfield, some of them are lacking the potential to score points in GAFFR and we should rule these out. The first player I’d ignore is Ben Osborn, despite being a quality player, Osborn is likely to start the season playing as an LWB or LB and as he is listed as a midfielder he doesn’t receive as many points for a clean sheet which makes other defenders more viable options at this price point.

Luke Freeman is another I’d like to rule out as Freeman has suffered from his lack of fitness in the past year and is probably going to be nothing more than a backup option this season, the same reasoning can be applied to both Illiman N’diaye and Femi Seriki who will most likely not get many minutes this season.

This leaves us with just four players, John Fleck at £8.0M is the most expensive and I think others less going forward than cheaper options, not just at Sheffield United. Oliver Norwood while Sheffield United’s primary set-piece taker, is generally not very good at them picking up just 2 goal contributions in the past 2 seasons, Norwood could be on penalties this season however I think someone like Jeremie Bela who is penalty-taker for Birmingham City is a much better pick at £2M cheaper. Ultimately the only two that interest me are Burke and Berge. Oliver Burke is interesting because he has primarily played as a striker for Sheffield United and recorded the most xA (Expected Assists) per 90 of any Sheffield United player last season (0.19).

Sander Berge, however, is very exciting at just £5.5M, I speak with great confidence when I say that he is far too good for the Championship. Berge is the type of player that could cause major problems for sides this season when given the freedom to do so.

Out of all the Sheffield United forwards I’d honestly only recommend even thinking about 2 of them, these being David McGoldrick and Lys Mousset. David McGoldrick has been ever-present since signing for the Blades in 2018, finishing as the club’s top scorer last season and scoring 15 the last time Sheffield United were in the Championship. McGoldrick also has extreme creativity which could lead to a few assists here and there throughout the season.

Mousset, nonetheless, is a really exciting pick. He was Sheffield United’s joint-top scorer in 2019/20 and is an electric player on his day. However, his time with Sheffield United so far has been hampered by injuries but under new manager Slaviša Jokanović, “Moose” has had a good pre-season, scoring three goals in two games while looking like the Blades’ most dangerous attacking threat.

In conclusion, I think the most consistent Blades assets are Egan (£6.0M, DEF) and McGoldrick (£9.0M, FWD). These two are mainstays in the Sheffield United side and will guarantee 90 minutes almost every week while picking up a good number of returns.

In my opinion, the options with the most potential upside are Bogle (£6.0M, DEF), Berge (£5.5M, MID) and Mousset (£8.0M). These three all have the ability to gain a high number of points depending on what role they play and/or whether they can nail down a starting berth at Sheffield United this season.