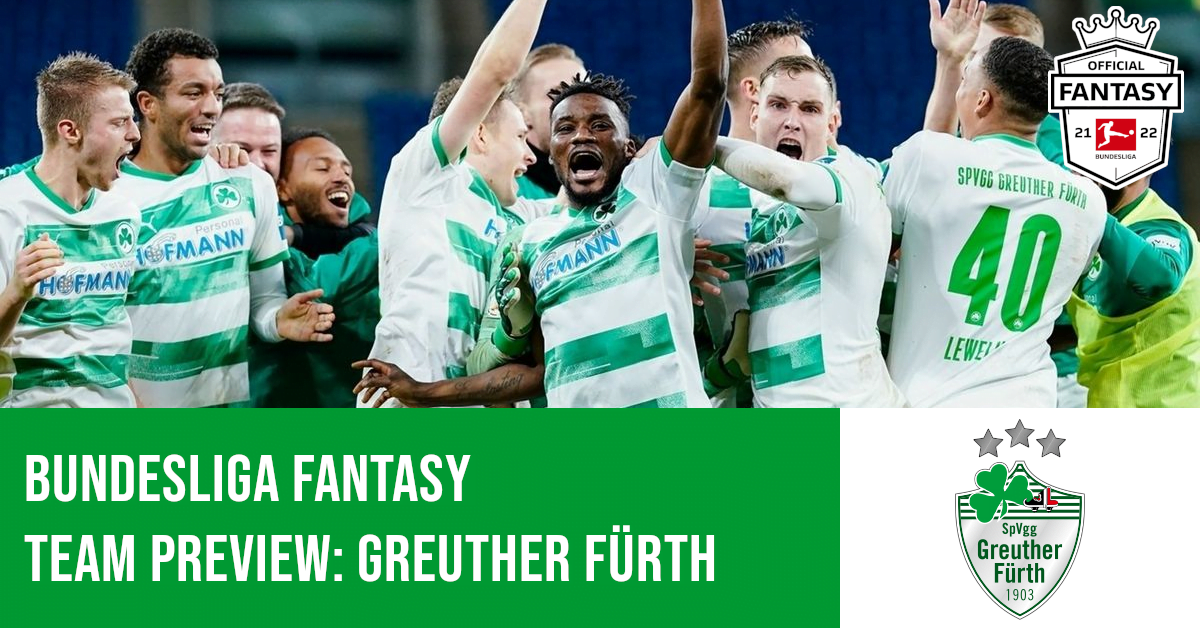 Bundesliga Fantasy now has two newly promoted teams for managers to select from and 2. Bundesliga runners up SpVgg Greuther Fürth from Franconia are one of them.

The “Cloverleaves” as they were nicknamed for adopting a cloverleaf as a nod to Fürth’s coat of arms, this will be the club’s second stint in the Bundesliga after being promoted for the first time in 2012. That season was one to forget for Greuther Fürth as they won just four games in the entire campaign and were relegated immediately down to the second division.

Fun Fact: Greuther Fürth’s stadium the Sportpark Ronhof has a capacity of just 16,626 seats and will be the smallest stadium in the Bundesliga this season but when it was founded back in 1910 it was the largest stadium in Germany. The capacity of the stadium was a massive complication when the team was promoted for the first time and they only finished upgrading the stands and adding more seats to meet Bundesliga’s requirements the night before their season opener at home to Bayern Munich in 2012.

Down to the Wire

The Bundesliga dream seemed a bit far fetched at first for Stefan Leitl’s men given their start to the season as the team recorded three draws and a defeat in their opening four league fixtures. However, a subsequent five-game winning streak in which they scored 15 goals was an indication of the change in fortune and Fürth were at the top of the table after Matchday 9. The team was unsuccessful in replicating the same form again and had trouble keeping up with leaders Hamburg and eventual winners Bochum for the rest of the season, although they did go unbeaten for eight league matches between Matchdays 16 and 23.

The final matchday of a season is always a thrilling affair and it was no different for title contenders SpVgg Greuther Fürth. Three different results were on the cards heading into the final day for the Cloverleaves:

What happened was certainly extraordinary and will go down as one of the great comebacks in Footballing history. In a must-win game against Fortuna Düsseldorf on matchday 34, Fürth were trailing 0-1 at home courtesy of a superb curling effort by Peterson in the 26th minute and Stach’s sending off in the added minutes at the end of half-time just added to their misery. The team had to respond quickly in the second half and respond they did through a Hrgota penalty kick to equalize the game. Fürth’s joy was short-lived however as Düsseldorf took the lead again through a fantastic team effort goal finished by Appelkamp just three minutes later. Despite going behind twice in the game and having just ten men on the pitch, the Cloverleaves did not accept what seemingly felt like fate by adding two goals of their own through Green and substitute Abiama in just 14 minutes to take a 3-2 lead and seal their promotion to the Bundesliga.

It wasn’t as simple as winning the game that would guarantee Fürth a spot in the first division but Bochum secured a comfortable victory against Sandhausen to win the title and Kiel were on the receiving end of a comeback as they lost 2-3 at home to Darmstadt to settle for third. The results were all in the favour of the Cloverleaves and they earned their spot in the top flight with a two-point lead over Holstein Kiel.

Greuther Fürth had the best away record in the 2. Bundesliga last season winning 9 of their 17 games away from home, drawing six matches and losing just two times. Their record at the Sportpark Ronhof wasn’t as impressive and they were the sixth-best team in the league at home.

“Attack is the Best Form of Defence”

This proverbial phrase certainly holds true for Fürth as it was mainly their attack that helped them win promotion to the Bundesliga and the team has built a reputation as a highly attacking team that is known for their comebacks to win games. Head coach Stefan Leitl was a defensive midfielder in his bygone days as a player but prefers an attacking approach: “As a team, it’s in our nature to go on the front foot from the very first minute” and that exemplifies the team’s attacking mentality.

The top 8 players in attacking involvement for the team

*David Raum has been listed as a midfielder in the game.

Even though it was their attack that stole the show, the Fürth defence wasn’t bad by any means. They conceded just 44 goals in the entire season which was the third-lowest (tied with Hamburg and Karlsruher) and just behind Kiel’s 35 and Bochum’s 39 goals conceded. The team also conceded the fewest penalties with two, the second-lowest shots on target and the lowest expected goals against per game with 1.23 xGA.

Full-back duo David Raum and Marco Meyerhöfer were key players for the Cloverleaves in defence helping the team keep 8 clean sheets as well as in attack registering 13 and 9 assists respectively. Raum was the assists leader in the 2. Bundesliga last season along with Bochum player Robert Žulj.

Up and coming centre-back Paul Jaeckel (23) who has more than tripled his market value in a year was the best defender for Fürth and forged a formidable centre-back partnership with another young talented defender – Maximilian Bauer (21).

Marco Meyerhöfer is the standout pick from the team’s defence in the absence of Raum in Bundesliga Fantasy and is more than capable of getting attacking returns and bonus points.

It was never going to be an easy summer transfer window for the promoted sides with a lot of big clubs hoping to lure the best players from their teams with promises of better wages and the security of playing for a more stable team in the first division. Bochum losing Robert Žulj for close to nothing seems like the biggest loss heading into next season until you look at Greuther Fürth’s dismal business in this transfer window.

The team has lost their best creator David Raum, best defender Paul Jaeckel and midfielder Sebastian Ernst who contributed with 11 G+A in the last campaign just before the start of the Bundesliga season. What’s worse is that they have lost all of those players for nothing as their contract ran out. The timing couldn’t have been any worse.

Fürth’s approach for this transfer window has been similar to counterparts Bochum – to sign players for free or on loan and spend as little as possible. Their most exciting signings so far have been highly-rated talents Jessic Ngankam (20) and Adrian Fein (22) both on loan from Hertha Berlin and Bayern Munich respectively. Ngankam in particular is one to watch as there are high expectations from the youngster and we are yet to see what he can do with regular minutes for the first team in Bundesliga Fantasy.

Players with attacking returns for Greuther Fürth in pre-season

Greuther Fürth Players to Watch Out for in Bundesliga Fantasy

The Bosnia-born Sweden international knows a thing or two about scoring goals in the Bundesliga. He has 104 top-flight appearances following spells at Borussia Mönchengladbach and Eintracht Frankfurt netting 12 goals and assisting 7 times. Hrgota enjoyed a much more prolific form with the Cloverleaves scoring 16 goals, assisting 7 in 31 games and finishing as their top-scorer last season. He was also second for shots per game in the league with 3.1 SpG and coupled with Fürth’s attack-minded tactics he is a good bet for attacking bonus and could be an absolute bargain in Bundesliga Fantasy for just 6M.

The former Bayern Munich attacker who came up through the academy of the reds had his best season in front of goal last season scoring nine goals and assisting two. This season the expectations are even higher as the loss of Ernst to the second division side Hannover means that Green will be promoted from central midfield to the #10 role and he will also be the first choice for free kicks and corner kicks for the team.

Green could be a possible early gem with games against Stuttgart (A), Arminia (H) and Mainz (H) to start the season before the first wildcard for the International Break.

The contribution of Raum to help the team achieve promotion cannot be undermined. He was to Fürth what Sosa, Guerreiro and Angeliño are for Stuttgart, Borussia Dortmund and RB Leipzig – an attacking left-back that is actively involved in goals for the team. Raum will be sorely missed by the Cloverleaves as he joined Hoffenheim but the next best thing for the team is right-back Marco Meyerhöfer. He was fourth for assists in the league with nine and will be an important player for Fürth going forward as they try to fill the void left by Raum. If you are looking for an attacking defender on a budget then Meyerhöfer is the best bet at just 5M.

It is no secret that the Greuther Fürth defence is even worse off than rivals Bochum. While Bochum have been able to retain their entire defence for the next season, Fürth have lost important players such as Raum and Jaeckel to other Bundesliga teams. Their high-press high-defensive line play might lead to many opportunities for opposition teams to score and while that might seem bad for Burchert and his clean sheet potential, it could lead to a lot of saves for him. You can think of him as Kobel from last season even though his performances are yet to be seen. Burchert is still the cheapest keeper expected to start in the game for the first matchday at 5M but could lose his spot to Marius Funk (2M).

Their pre-season results have been far from impressive as they haven’t won a single game and a lot of key players have left the club especially in attack but the Cloverleaves still possess enough firepower to challenge other teams and fight to avoid relegation in the Bundesliga.

The club holds a lot of promise and their prospects in fantasy are fantastic. Greuther Fürth are full of potential bargains for Bundesliga Fantasy managers and attackers Branimir Hrgota and Julian Green have the capability to be more than just budget enablers and draw similarities to the duo of Saša Kalajdžić and Borna Sosa from last season.

In defence, Marco Meyerhöfer is potentially the best sub 6M defender in the game, whereas keeper Sascha Burchert who has gone under the radar could be a bonus points machine for saves in the upcoming season.

Their fixtures are favourable even for a side that has just been promoted so it is certainly not a bad option to select players from the team at the start. Fürth is one of the most thrilling sides to join the Bundesliga in recent years and the expectation is that there will be goals (and lots of them!) from “The Cloverleaves” in the upcoming season. 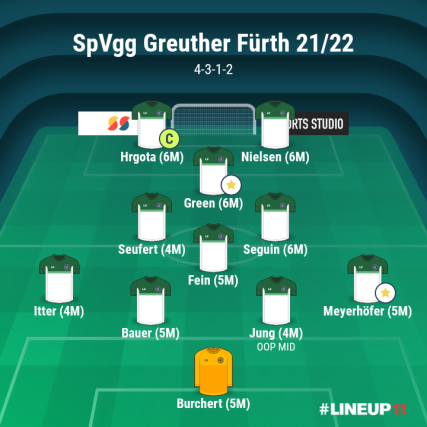