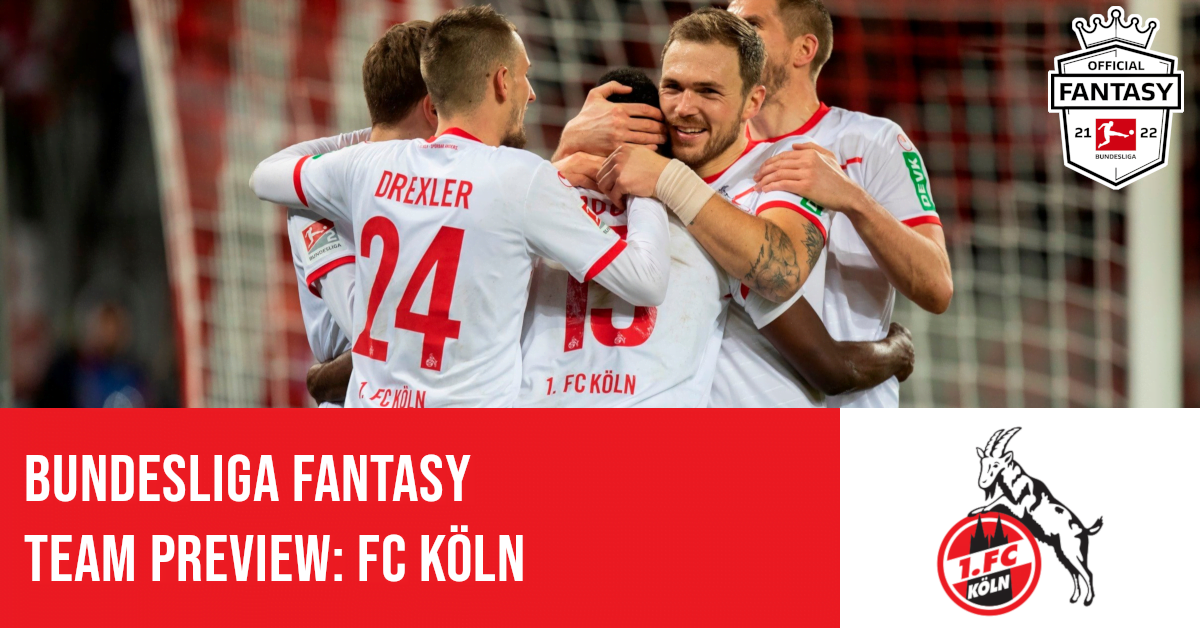 Our Bundesliga Fantasy team preview series continues with an in-depth preview of FC Köln who finished 16th in the league last season.

FC Köln – also known as FC Cologne in English – is the fourth largest club in Germany after Bayern Munich, Schalke and Borussia Dortmund. The club’s nickname Die Geißböcke (the Billy Goats) refers to the club’s mascot, a male goat named Hennes after former player Hennes Weißweiler, and dates back to 1950 when a circus presented them with a goat as a carnival joke. Köln’s main rivals are Borussia Mönchengladbach, Bayer Leverkusen, and Fortuna Düsseldorf – all clubs from the same Rhine-Ruhr region, near the river Rhine.

Fun Fact: Köln were the very first winners of the Bundesliga in 1963/64.

FC Köln went into the 20/21 season intending to avoid relegation and for most of the season, it seemed like the Billy Goats would be relegated along with Schalke who were going through one of the worst seasons in Bundesliga history. It was nine games before they got their first win but things were looking especially grim in the Rückrunde when Köln went through a nine-game winless streak from Matchday 21 to 29 and were lagging four points behind Arminia Bielefeld for the relegation playoff spot.

A managerial change and a couple of impressive wins against second-placed RB Leipzig and FC Augsburg in the next two games helped close the gap a bit but the team wasn’t out of trouble yet. Köln were still 17th with three games to go but just one point behind Arminia and Werder Bremen. There were still five teams trying to avoid the relegation zone but what happened next was less about Köln’s ability and mental fortitude than about Werder Bremen’s collapse.

The Green-whites were sitting comfortably at 11th place heading into Matchday 21 and were 12 points clear of 17th placed FSV Mainz then but an end of season breakdown saw Bremen win just one game and pick up just six points from their next 12 games. It was a big opportunity for Köln to make amends and move up the table and it went down to the final matchday when the Billy Goats scraped a 1-0 win against already relegated Schalke thanks to centre back Bornauw’s 86th-minute goal to leapfrog Werder Bremen in the table and clinch a spot in the relegation playoffs by two points. Heartbreak for Bremen who were condemned to their second-ever relegation, and their first for 41 years but ecstasy for Köln as they were ensured top-flight football for another year or were they?

Finishing 16th meant that Köln had to battle it out with Holstein Kiel who finished third in the 2. Bundesliga in a playoff game over two legs to determine who deserved a place in the Bundesliga. The first leg of the playoffs had the worst outcome possible for Köln as Kiel managed to beat Ezzeh 0-1 at their own home turf and get the all-important away goal. With their backs to the wall for the second leg, Köln came up with their best performance of the season as they comfortably thrashed Kiel 1-5 away to win the relegation playoffs and secure their spot in the Bundesliga.

FC Köln had the second-worst home record in the league last season gaining just 14 points from their 17 games at the RheinEnergieSTADION and won just three games at home – the same amount as Schalke and Werder Bremen.

The team was far from impressive in the goal-scoring department last season and only Schalke (25) and Arminia Bielefeld (26) scored fewer than Köln’s 34 goals. It is worth mentioning that key players in attack such as Kainz, Hector, Andersson and Modeste were injured for extended periods throughout the season and did not get much game time.

Attacking midfielder Ondrej Duda (7 goals, 4 assists) was the sole bright spot with total attacking returns in the double digits and no other attacker failed to score more than three goals for the team which summarizes their struggle to score goals. However, this might change next season with a healthy squad and star player Mark Uth returning to the club.

Far from the Best in Offense or Defense

To say that the Köln defence was bad last season would be an understatement. In a year when most of the Bundesliga fantasy players seem to be overpriced, the defenders from Köln have been priced around 4M, which sounds relatively cheap and there is a reason why.

Defender Ismail Jakobs who would sometimes play OOP on the left-wing was the only defender worth considering from the team but he was sold to Ligue 1 side AS Monaco this season. The rest of the defenders aren’t worth punting on even at their low price.

The Return of Mark Uth

Mark Uth’s heroics in the 19/20 season for Köln when he scored five goals and assisted six times in just 15 games for the team means that his arrival was awaited by both Köln fans and Bundesliga Fantasy Managers alike. The club made efforts to sign him permanently but could not match Schalke’s asking price of 10M until the blues were relegated and Köln were able to sign Uth on a free transfer.

Uth’s return to the squad will immediately bolster the attack that struggled to create chances and his presence should improve the prospects of other attackers on the team so the expectation from Köln is that they score a lot more goals this season.

Players with multiple attacking returns for FC Köln in pre-season

FC Köln Players to Watch Out for in Bundesliga Fantasy

Mark Uth was a revelation back in the 19/20 season when head coach Markus Gisdol decided to play him as a #10 rather than his usual role as a striker and he became an instant fan favourite with his consistent performances. He was yet to be involved in a single goal involvement for Schalke before joining Köln but he was a must-have in fantasy soon after he began his free-scoring form with the Billy Goats.

Two years later the coach is different and so is the supporting cast but Uth is still expected to play as an attacking midfielder and if he can replicate his form from his previous stint with Köln then he will be a gem in Bundesliga Fantasy again.

Duda did a bit of everything for Köln last season and seemed like the only player with a spark that could get them a goal at times and will be the standout option from the team’s midfield again this season. His best attribute, however, is that he is the first choice for every set-piece there is, although he faces tough competition from Hector and Kainz who are breathing down his neck waiting for an opportunity.

There is special emphasis on budget players at the start of the season as managers try to fit in as many of their favourite players as they can within the budget constraints. This is where enablers such as Thielmann come in. The 19-year-old is one of the most highly-rated prospects in Germany and is expected to play OOP as a striker in the upcoming season. He has had a great start to the pre-season with two goals and two assists and there is no better player expected to start at 4M.

Köln will be resting their hopes on star player Mark Uth this season and he has already made an impressive start to the pre-season scoring three goals and registering one assist. This is one of the most talented Köln squads in terms of attack that we have seen in recent years so there is optimism that the team will not struggle to score goals at the very least and midfielders Ondrej Duda and Jan Thielmann will be the perfect differentials when they have favourable fixtures.

In terms of defence, the club is looking at another season where they will leak plenty of goals at the back unless there are new signings to replace the outgoing Jakobs and Bornauw in the squad and their defenders are best avoided until they do so.

The writing is on the wall for FC Köln. New head coach Steffen Baumgart only knows one way how to win games and that is to attack and score goals. He was known for his attacking mindset with SC Paderborn that would compromise the defence and it looks like he will try to do the recreate the same strategy again with all the attacking talent at his disposal. Köln attackers certainly hold a lot of potential and will be tempting plays at their price point with games against Hertha and Bochum in the first three matchdays.

Note: Duda might not be in the expected lineup for Matchday 1 but he will still get plenty of game-time and start in most of the matches.