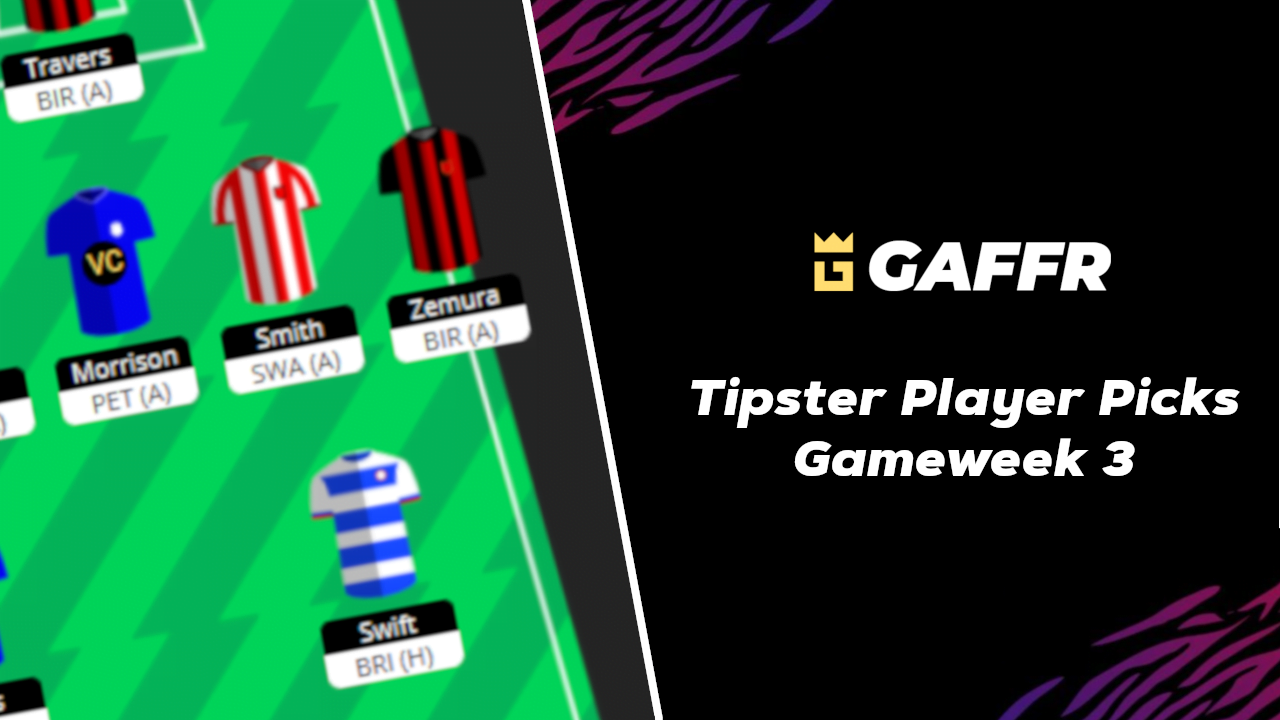 After a successful rendition of this post in gameweek 2, where the side picked managed to accumulate a whopping 90 points, even with our captain sent off, I am back to announce my picks for gameweek 3 of the GAFFR season.

In goal I have opted for Bournemouth shot-stopper Mark Travers, Travers faces a side whoever achieved more than one xG in a game once in their last four Championship matches. Birmingham have struggled to break down high-level defences in the past and I see it as not being any different here.

No changes from last week here, Moore kept a clean sheet in one half against Barnsley and Coventry still look pretty solid at the back. Still, the only nailed £4.0M keeper in GAFFR.

Once again, no changes in this spot. Despite his blank last week, I’m still a believer in Antonee Robinson coming up good. Fulham have a really strong defence and Robinson plays the highest upfield, giving him opportunities for attacking returns.

Yes, I’m being serious, Tete captain. Even though he played further back than Robinson in GW2, Kenny Tete seemed like the player with more attacking prowess. His late runs seem like they could cause problems for the opposition defences this season. I realise this is quite a left-field captain pick and you may feel free to disagree. Can’t be worse than last week’s captain eh?

I correctly predicted that Morrison could get a chance for an attacking return in GW2, but by no stretch of the imagination did I think it would be an assist. The 31-year-old was absolutely immense in his first league game back from injury and has definitely locked down his place back in the Cardiff line-up. Cardiff have the T-2nd best xGA in the league so far (1.01) so should be favourites for a clean sheet.

You may be starting to notice a pattern emerging with this defence. Jordan Zemura, while not getting an attacking return or even a clean sheet impressed Bournemouth fans with a mature performance against Nottingham Forest. Unfortunately, I have to report that he suffered from the same problems as against West Brom by no fault of his own. After Bournemouth’s David Brooks was sent off Zemura had to set a lot of further back limiting his potential. I think it is unlikely Bournemouth see another red here and it could be Zemura’s breakout game.

I’m sure by now you knew this was coming, Tommy Smith completes the exact same back 5 as last gameweek. Stoke face a Swansea side who haven’t looked impressive in either of their games under Russell Martin so far and looked bereft of any attacking ideas against Sheffield United in gameweek 2. Smith always carries a chance of getting an attacking return and seems like a player who really suits the bonus point system in GAFFR.

John Swift has had what can only be described as a sensational start to the season at Reading and I expect that to carry on against Bristol City. The club had troubles defensively last season and they don’t seem to have improved too much. Swift also benefits from having a home advantage with a full crowd behind Reading.

Ryan Giles is yet another player who has had a spectacular start to this campaign. Giles has featured predominately as a winger in a 3-4-3 formation so far, a similar role to someone like Rhian Brewster, who costs £8.5M and is listed as a Forward.

Callum O’Hare once again proved to be a bonus point magnet for Coventry as they took on Barnsley in GW2. He was unfortunately booked though which lost the Coventry man a point. I back O’Hare to work his magic against a poor Blackpool side in GW3.

Phillip Billing once again showed his class for Bournemouth in GW2. I’d be cautious of starting Billing in your team as Birmingham are yet to concede a goal in the Championship this season and it could be risky expecting them to do so now.

Sander Berge is still a player I see a lot of potential in when it comes to GAFFR this season, even if this Sheffield United side are the only team yet to score in the competition. Berge plays against West Brom in this matchday and so is firmly on the bench.

Even though Millwall are known for their impressive defence I think Fulham should have what it takes to overpower them and with Mitrovic as the focal point. Fulham managed to bag 5 against an admittedly inferior Huddersfield Town side despite a red card to key man Harry Wilson. Mitrovic opened his account for the season in the said fixture and will have a good chance of repeating that in this one.

Kieffer Moore impressively scored his first of the season against Blackpool last time out despite coming on as a substitute and will hope that after getting those minutes under his belt he is ready to start Cardiff’s showdown with Peterborough. Moore’s influence on this Cardiff side cannot be underestimated. He is an integral part of Mick McCarthy’s system and will be looking to get another goal against a side yet to keep a clean sheet.

Alright, alright. I’m not ashamed to admit I might be jumping on the bandwagon a bit with this one. Reading youngster Azeez however had a really solid pre-season with the Royals and has carried that form into the Championship campaign, getting off the mark in his last outing. Reading have one of, if not the best-attacking fixture this week and it’d be rude not to pick up on them potential gem in Azeez.

GAFFR Team of the Week for Gameweek 3