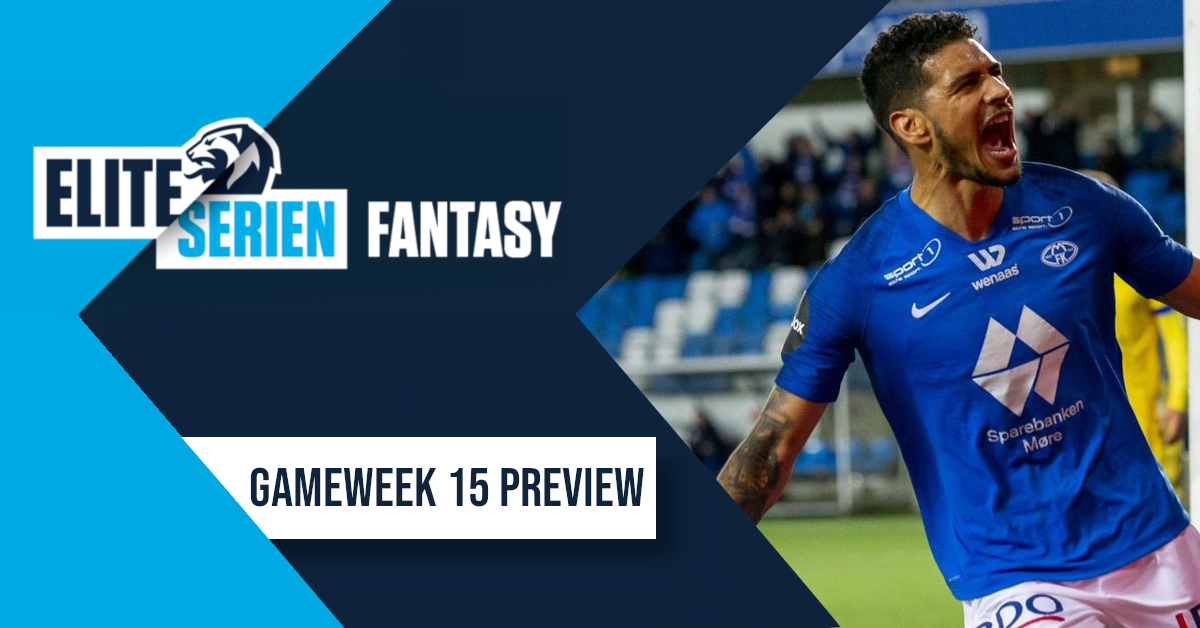 Magnus Wolf Eikrem might’ve not had the best start to the season but is starting to display some of his old form and is one of the top picks in Jacob Silkstone’s Fantasy Eliteserien preview for gameweek 15.

The previous gameweek was strung out over a fortnight, but patience was eventually rewarded with a glut of points in the final round of matches. Between them, our suggested team of the week contributed 138 points, which would have been considerably more if captain Thomas Lehne Olsen hadn’t rattled the woodwork three times. The only flop was Sarpsborg captain Joachim Thomassen, who received a yellow card and a suspension in the opening game of the double round. Thomassen also happened to be the only one of my recommendations that I transferred into my team this week, a factor that may or may not have contributed to his worst fantasy performance of the season so far.

With the transfer window wide open, the Norwegian league’s mass summer defenestration is well underway. Fredrik Aursnes was still in over 36% of teams by the end of GW14, but he’s now a Feyenoord player. Kristoffer Zachariassen and Mushaga Bakenga currently have the fourth and fifth-highest points totals in the game, but will spend the rest of the season in Hungary and Japan, respectively. Vålerenga have sold arguably their two best players in goalkeeper Kristoffer Klaesson and playmaker Aron Dønnum. Time is up for the man who celebrated his goals by brandishing a hand-drawn ‘Rolex’, even though he’s still owned by one in six Fantasy Eliteserien teams. Ohi Omoijuanfo, the most selected player in the game, is also on his way out of Molde, but the good news (for everyone apart from opposition defences) is that he’ll be staying until the end of the season.

Of course, the window’s also open for new arrivals. Stabæk handed debuts to four new signings in their GW14 game at home to Sarpsborg and already look like a much-improved side, and some huge swings in form are likely to happen over the next few weeks. We’ll assess some of the new arrivals ahead of GW16, but for now, it seems sensible to sit back and see how they settle in.

If you haven’t yet played your first wildcard, GW15 is your last chance. It also happens to be a good time for a wildcard: GW15 is cup qualification week, and the current template is full of players from midtable teams. Bodø/Glimt and Molde are the best teams in the league, with Rosenborg a fairly distant third, and you’ll have a chance to stock up on their key players while the teams around you are scrambling to cover them with free transfers.

A word of warning, though… Bodø and Rosenborg are all still involved in European football, while Molde played 120 minutes against Trabzonspor before going out on penalties. The league line-ups for all three teams could well be affected by some heavy rotation. Molde also have a blank coming up in GW16, so loading up on their players right now isn’t as obvious a strategy as it initially appears.

Sarpsborg are playing like relegation candidates at the moment. Although Strømsgodset don’t have the most inspiring away record, it’s worth a punt on their keeper Viljar Myhra for just 4.5 million. Myhra has the fifth-highest points total among the Eliteserien keepers so far this season, but at a considerably lower price than the four ahead of him.

Brann are also playing like relegation candidates, and the local papers have been full of stories about the players cavorting around the pitch in their underwear at 5 o’clock in the morning. Without going into too much detail about what else they were up to, it’s safe to say they haven’t had the smoothest preparation for a crucial relegation six-pointer against Sandefjord. Meanwhile, Sandefjord have been in decent form, and cult hero Brice Wembangomo (4.6M) offers a chance of fantasy points at both ends of the pitch.

Rosenborg played their European game a couple of days earlier than either Bodø or Molde, so in theory their players should be at less risk of rotation. Swedish full-back Adam Andersson (5.8M) is the pick of their defensive options, with two assists in his previous league game.

Following a long summer break, Vålerenga return to action against one of the league’s weakest attacks. Tromsø have barely averaged a goal a game, and are yet to win at home. With popular fantasy pick Christian Borchgrevink suspended, we turn to Jonatan Tollås Nation (5.9M) for his set-piece threat and bonus point potential.

Our first midfield pick is the most in-form player in the game. Stabæk’s season has been transformed by a managerial change and some smart acquisitions in the transfer window, and Oliver Edvardsen (7.1M) looks impossible to ignore at the moment. If you’re thinking longer term, it’s worth noting that Stabæk have a blank in GW19 followed by a double in GW20.

If Stabæk are to slip up this week, Torgil Gjertsen (7.9M) will likely be involved for hosts Kristiansund. Two goals and an assist, plus five bonus points, in his last four games are an indication of a player beginning to hit top form.

As he returns to face his previous club, Brann, Vidar Ari Jónsson (still only 5.3M) is our Sandefjord midfielder of choice. He has four goals and an assist from his last six games.

We’ve kept some money in the bank for Magnus Wolff Eikrem (12.4M) as Molde face a Viking side who are likely to be without their star player. When fit, Eikrem is arguably the best player in the league, and he could be a key differential for anyone looking to climb the ranks this week. It’s worth a reminder, though, that all of Molde’s key men are rotation risks and Eikrem probably doesn’t represent great value for money in the long run.

The same caveat applies to Ohi Omoijuanfo (now up to 12.3M), but the league’s top scorer is in red-hot form and will be a hugely popular captain choice for this gameweek. He was subbed with a few minutes left to play in the crucial European game against Trabzonspor (as was Eikrem), which looks promising for his chances of starting again on Sunday.

We’re also backing Thomas Lehne Olsen (9.4M) to continue his good form, even with a tough fixture against defending champions Bodø/Glimt. Bodø haven’t kept a clean sheet since GW7, and might be resting a few key players between European games. If Lillestrøm can score, there’s every chance Lehne Olsen will be involved again.

Strømsgodset’s Fred Friday (8.4M) completes a trio of in-form strikers, and could be a good outside bet for the captaincy if there are concerns over Ohi’s rotation risk.

Eliteserien Fantasy Team of the Week for Gameweek 15 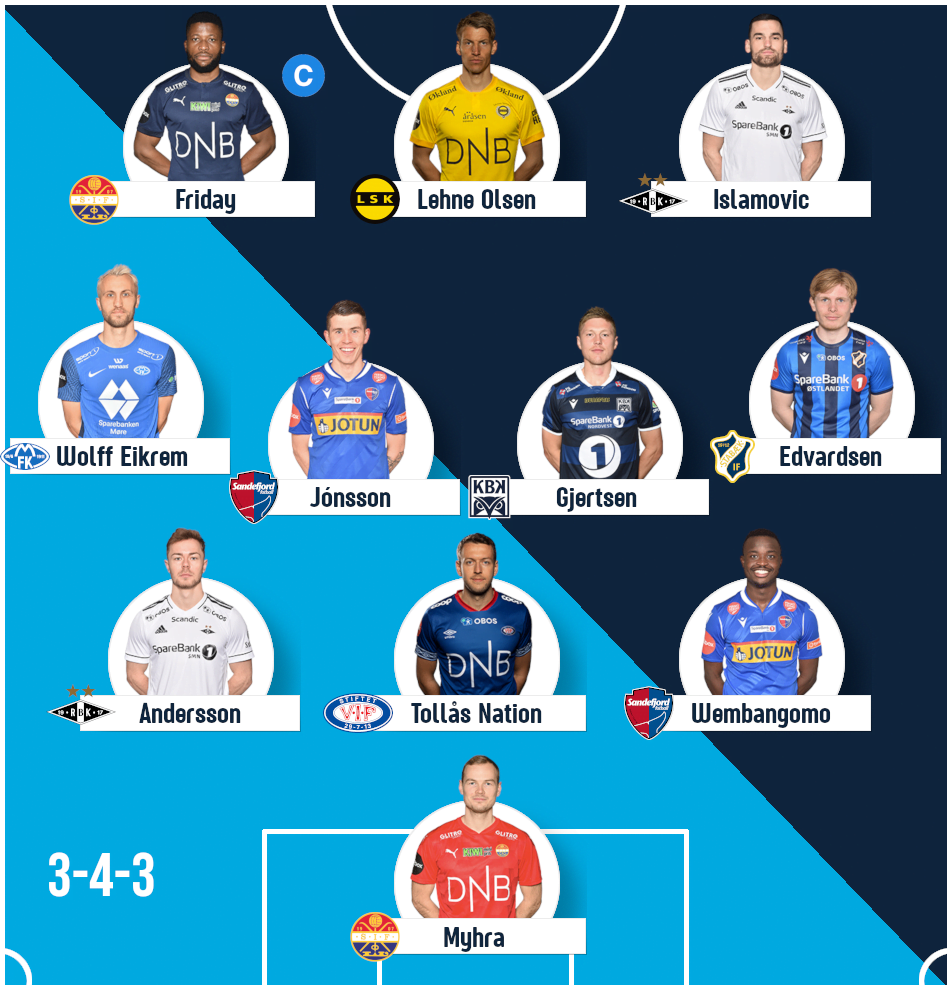