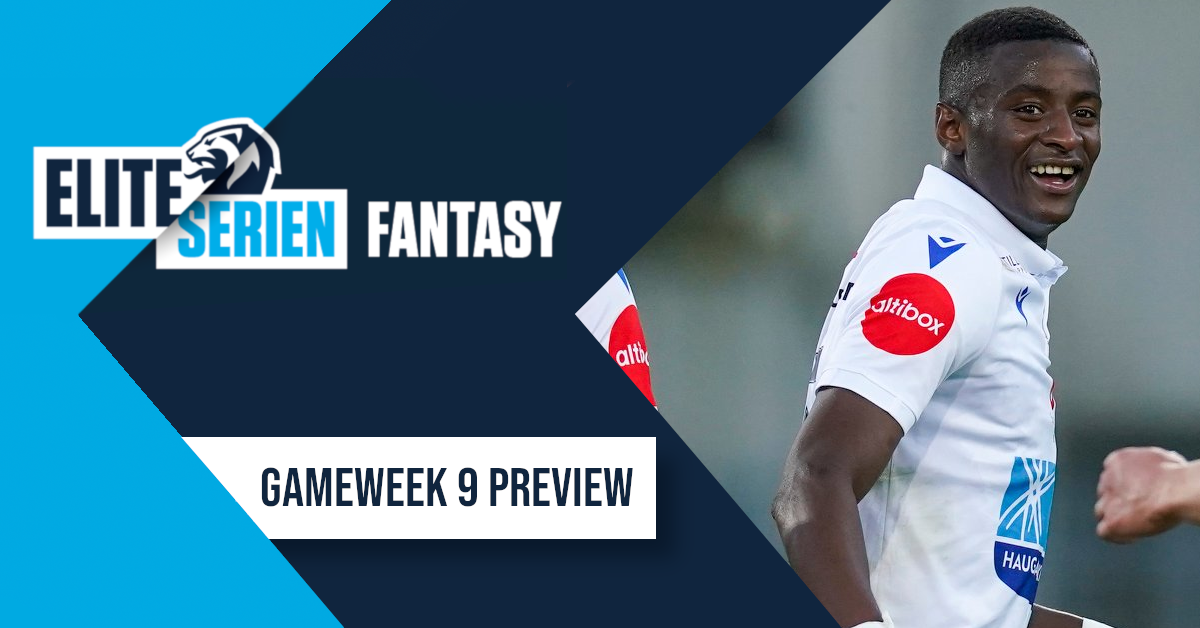 Haugesund had the worst start possible to the Eliteserien season, losing each of their first five games but are currently making a resurgence thanks to Alexander Søderlund and Alioune Ndour’s red hot form. With a fixture at home against Aalesund, tipster Jacob Silkstone is backing the attacking duo to have another great game again in gameweek 9 of Fantasy Eliteserien.

The gameweeks are coming thick and fast in Eliteserien, with three rounds jammed into the last calendar week; unfortunately, a lot of gameweeks doesn’t necessarily mean a lot of points. It was another relatively low-scoring round, with the overall average down at 39 (the second-lowest of the season). If we could pick one moment, to sum up the round, it would be Sebastian Sebulonsen playing Veton Berisha (both in our picks) through on goal and Berisha tucking the ball into the net… Naturally, Berisha was offside, and the goal was immediately ruled out.

Our only goal of the round came from Tobias Heintz against Molde, and our eleven players scored a grand total of zero bonus points between them. Our final score was 38, putting us just below the overall average for a second consecutive week. Surely things can only get better in the next set of games? Here are the players we’re backing to pull us out of a rut…

A long-term injury to first-choice keeper Anders Kristiansen has handed an opportunity to budget alternative Simen Vidtun Nilsen (4.5M) between the posts for Sarpsborg. Although he hasn’t registered a clean sheet yet in his (two-match) Eliteserien career, Vidtun Nilsen comes up against the league’s least effective attack as Sarpsborg travel to face Jerv on Sunday evening.

Aleksandar Melgalvis (5.0M) makes a first appearance in our Team of the Week as HamKam host Odd. Belying his budget price, Melgalvis ranks higher than any other defender for xA, and there’s a chance for returns at both ends of the pitch this week.

Igoh Ogbu (5.4M) has been a giant at the back for league leaders Lillestrøm all season, and we were duly punished for ignoring him in our midweek selections. Since the opening day, he’s only blanked in a single game, picking up more bonus points than anyone else in the Lillestrøm squad. Even with a relatively tough fixture away at Tromsø, he makes our first XI for this round.

With some reservations, Sebastian Sebulonsen (6.3M) is our final defensive pick. On current form, it’s unlikely that Viking keep a clean sheet away at Strømsgodset, but Sebulonsen’s attacking threat sets him apart from the other contenders for our team. He ranks higher than any other defender in Eliteserien (and higher than most strikers) for xG.

This round should be all about the mid-priced midfielders, and we have an array of strong candidates to choose from. Firstly, Haugesund’s Alioune Ndour Badou (8.3M) is one of the most in-form players in the league, with four goals and 42 fantasy points from his last five games. He has more xG than anyone else in the Haugesund squad, even if he is outperforming his stats slightly.

Niklas Sandberg (8.6M) looks like one of the best picks in the game, provided he keeps his starting spot for Viking. With Tripic out for the next month, he has assumed the role of creator-in-chief. Incredibly, he ranks in the top five for xA this season despite only playing more than 60 minutes twice. As long as Tripic is out, his place in the team looks secure.

HamKam have been quietly effective in their first season at this level since 2008, and remain undefeated at home. Meanwhile, Odd are hovering on the brink of the relegation zone after a poor run of form, and our attention turns back to Kristian Eriksen (7.0M) ahead of the meeting between the two teams. Eriksen has blanked in every away game so far, but on his home turf he has two goals and an assist from four games, plus six bonus points.

Jonathan Lindseth (8.5M) walked away from Sarpsborg’s midweek defeat against Molde with all three bonus points, despite missing a host of chances. He sits second in the league for xA, suggesting a haul might be on the way soon. On paper, Jerv are one of the weakest defences in Eliteserien, and Sarpsborg’s key midfielders (Heintz is nearly a million cheaper, if you don’t have the budget for Lindseth) are genuine contenders for the captaincy this week.

Having repeatedly failed to find a budget route into the Bodø/Glimt midfield with Hugo Vetlesen, we’re turning to an even cheaper alternative in Elias Hagen (5.0M). Hagen is Patrick Berg’s successor in the central midfield role: it’s a hard act to follow, but he provided two assists against Strømsgodset in midweek and his share of set pieces makes him a candidate for every fantasy manager’s watchlist.

One week we’ll be bold enough to overlook Veton Berisha (12.1M), but this isn’t the week… Berisha’s ownership keeps inching up, and at the time of writing he’s in close to 72% of teams. If you’re taking a safety-first approach and playing purely by the numbers, he’s virtually an automatic captain choice, leading the league for xG and also near the top for xA. Strømsgodset may be unbeaten in their last five, but they’ve conceded 10 goals in four home games this season and it would be a surprise if they kept Viking out. Berisha takes the captain’s armband for us again.

Rather unexpectedly, we’re doubling up on the Haugesund attack in anticipation of a high-scoring game with Aalesund. Alexander Søderlund (7.4M) is among the league’s most in-form strikers, with three goals and three assists in his last four games (despite reduced minutes). We’re predicting his purple patch isn’t quite over yet. 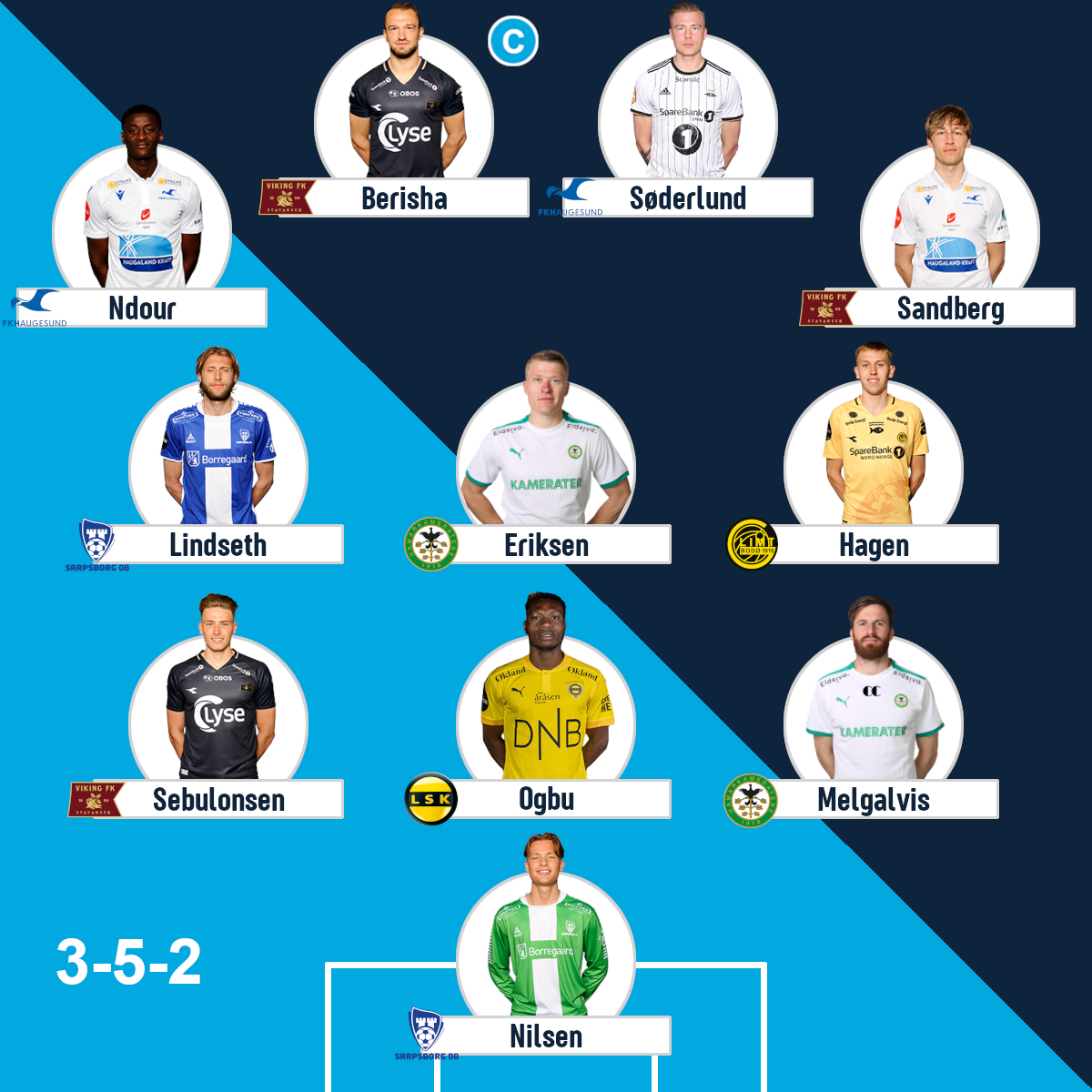