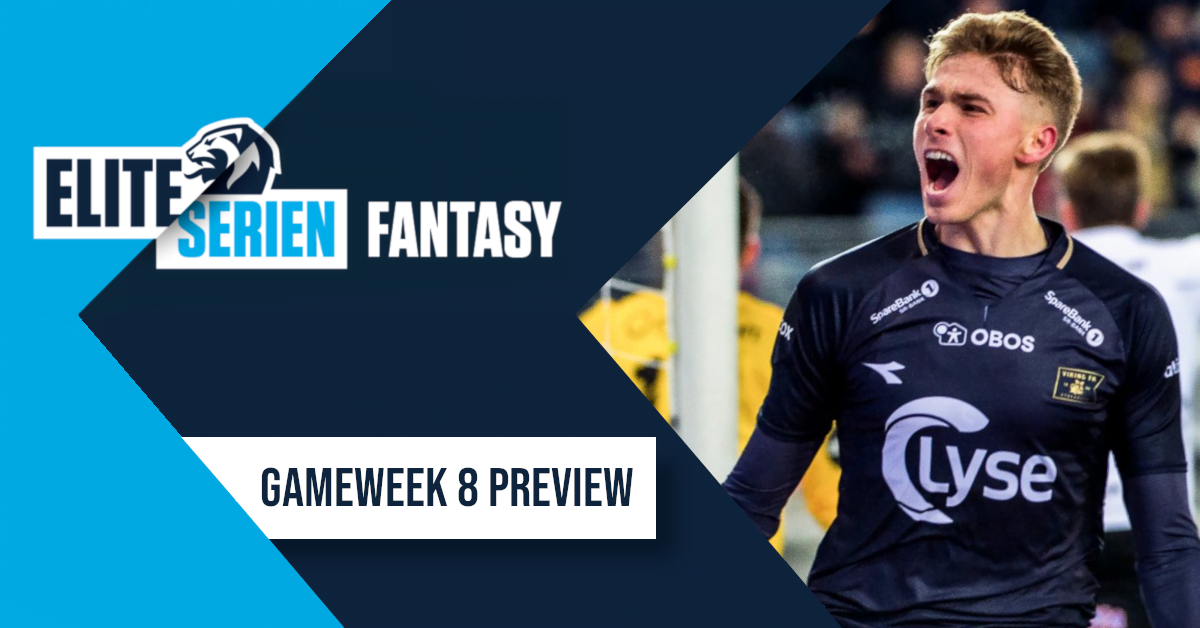 Viking’s Sebastian Sebulonsen is one of Fantasy Eliteserien’s hidden gems with the same points as talisman Veton Berisha in his last six matches, and tipster Jacob Silkstone is backing him to continue his run of six consecutive games with a return against newly-promoted Ham-Kam in gameweek 8.

It all started so well for our Team of the Week… Both of our Lillestrøm picks, Igoh Ogbu and Akor Adams, scored in the opening match of the gameweek, with Ogbu also collecting a bonus point. Sadly, that was as good as it got. In the next game, Molde lost their clean sheet deep into stoppage time, and nothing went right from that point onwards. We were correct to predict that perennial captaincy contender Veton Berisha might struggle away against Tromsø and equally correct in looking to Bodø/Glimt for alternative captain options… but horribly wrong to settle on Hugo Vetlesen. Vetlesen came away from Bodø’s game at Haugesund with the highest xGI total of anyone on the pitch, but stats don’t always convert into points: he blanked while Saltnes and Pellegrino both hauled. A bonus point from Tobias Heintz was the only positive on a chastening Sunday for us. In total, we scored just 35 points (overall average jumped to 46 after autosubs).

After our worst week of the season, we’re aiming to bounce back in the GW8 midweek matches. Kristiansund’s game against Tromsø has been postponed, but the other fourteen Eliteserien teams will all be in action. Crucially (although it’s not helpful for this preview), we’ll have early line-ups for the likes of Bodø/Glimt, Viking, and Odd.

The stats suggest that Jerv have the least potent attack in the league, by a fairly considerable margin. That’s largely backed up on the pitch, where they’ve failed to score in any of their three away games so far. They travel to Aalesund in GW8, so Sten Grytebust (5.1M) has a high chance of a clean sheet and is still priced very reasonably in comparison to the top keepers.

While most teams were looking to Pattynama as a potentially out-of-position route into the Viking defence, Sebastian Sebulonsen (6.2M) has quietly emerged as one of the best picks in the game. Since securing his spot in the starting XI, he has managed to return fantasy points in six matches out of six. His total of 53 points during that run is exactly the same as Veton Berisha’s, but for half the price.

Seasoned FPL veterans might remember Liverpool’s start to their victorious 19/20 season. Although they were statistically one of the strongest defences in the league, they kept just 2 clean sheets in their first 15 games, developing an infuriating habit of conceding one late goal per match. What followed was a run of five consecutive shutouts, including Trent Alexander-Arnold’s season-defining haul against Leicester. Bodø/Glimt have had a similarly frustrating start to the Eliteserien campaign, but there’s every chance of things coming together just as spectacularly as they eventually did for Liverpool. We’re keeping faith in Brice Wembangomo (6.0M) ahead of a home game against Strømsgodset.

Versatile defender Sam Rogers (5.9M) looks to have secured a regular starting berth at Rosenborg under Kjetil Rekdal, also his manager at HamKam, last season. Rosenborg have three clean sheets from three home games, and will be heavy favourites to continue their recent upturn in form against Haugesund. As long as he maintains his place, Rogers offers a relatively cheap route into their defence with plenty of attacking potential.

In the expectation that he comes straight back into Odd’s first XI after a rest in GW7, we’re tempted to punt on veteran set-piece specialist Espen Ruud (6.5M) ahead of a home game against Sandefjord. Owusu offers a cheaper and more nailed alternative, but Ruud is still capable of spectacular hauls: he’s the kind of player you’d bring on a ‘rich uncle’ chip, even if he’s not necessarily the kind of player you’d bring in on a wildcard.

Lillestrøm have enjoyed a stunning start to the season and sit top of the table with a game in hand as we head into GW8. Gjermund Åsen (9.4M) has been central to their success, sitting third in the league for xA and fourth for fantasy points. Vålerenga have conceded ten in their last four away games, and we’re expecting a fairly high-scoring, open game when they meet on Wednesday evening.

Is it embarrassingly stubborn that we’re still sticking with Hugo Vetlesen (8.8M) as our Bodø/Glimt midfielder? As mentioned above, Vetlesen had a higher xGI total than any other Bodø player against Haugesund, even if that didn’t convert into fantasy points. Surely this time?

Ahead of Sarpsborg’s home game with Molde, we’re taking the slightly unusual (and possibly misguided) step of overlooking Molde options completely. Wolff Eikrem is one of the best players in the league, but his fantasy price remains slightly off-putting. Instead, we’re looking at Sarpsborg’s Tobias Heintz (7.7M). Heintz has returned a minimum of three points in each of his five starts this season, and is in the league’s top five for xA per ninety minutes.

Milan Jevtovic (6.5M) briefly lit up the league while playing for Rosenborg back in 2017, and has shown signs of coming back to something approaching his best form with four attacking returns in five starts for Odd this year. His minutes are a slight concern, but the Odd team sheet will be available ahead of the deadline, and he could well be worth a punt if he starts.

What is there to say about Veton Berisha (finally given a price rise to 12.1M) that we haven’t said already? He’s been in our selection every week of the season, and captains our team again this time around. Four of his six goals have come at home; HamKam aren’t the easiest defence to break down, and they’re sure to have a plan for dealing with Berisha, but we’re tipping him to be in the points again this week.

Sigurd Haugen (7.8M) has had an ‘all or nothing’ season so far, blanking in five games and delivering double-digit hauls in the other three. His owners will be hoping it’s time for another haul as Aalesund face Jerv: unsurprisingly, Haugen ranks far higher than any other Aalesund player for xG and big chances. He also has more fantasy points than any other forward, with the exception of Berisha. 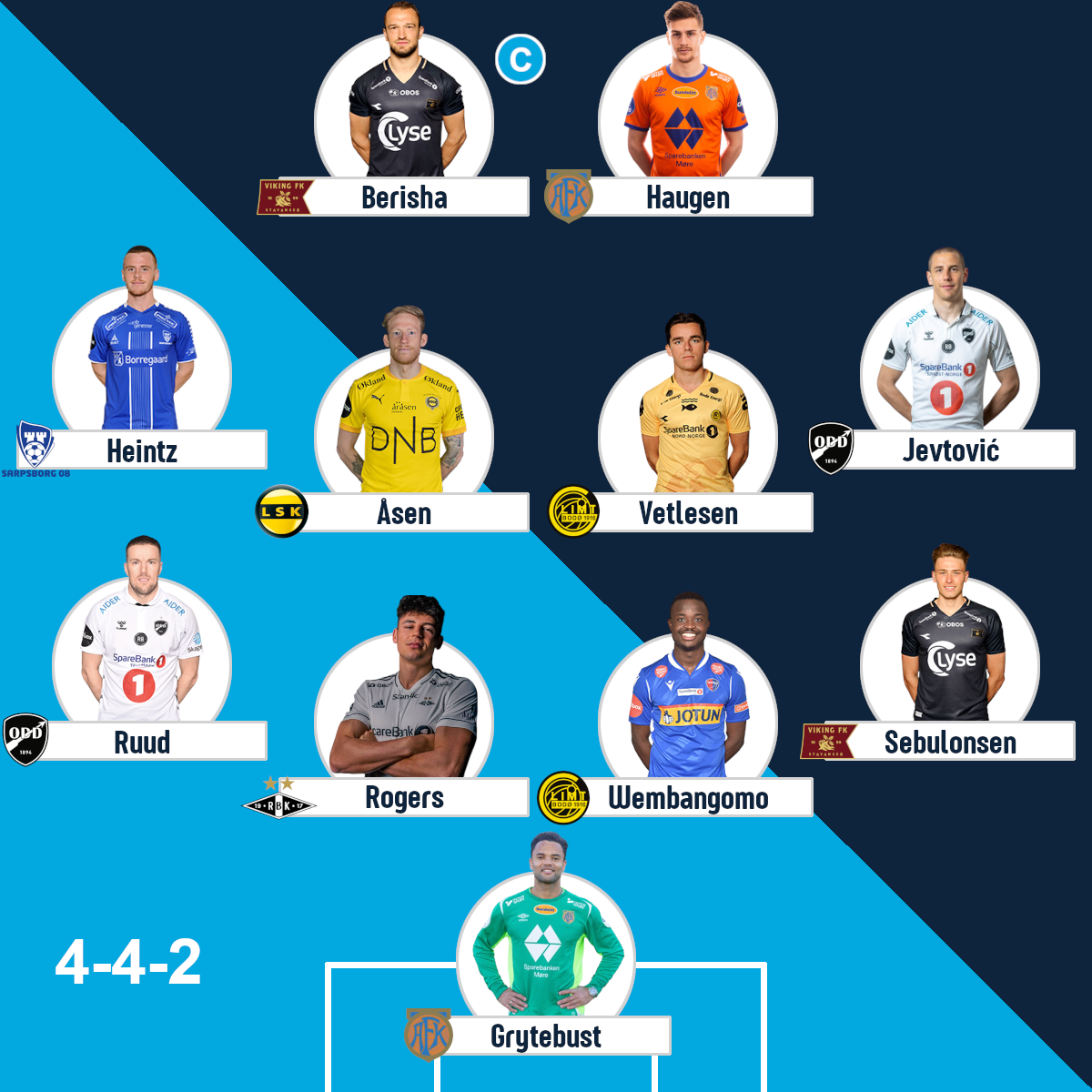