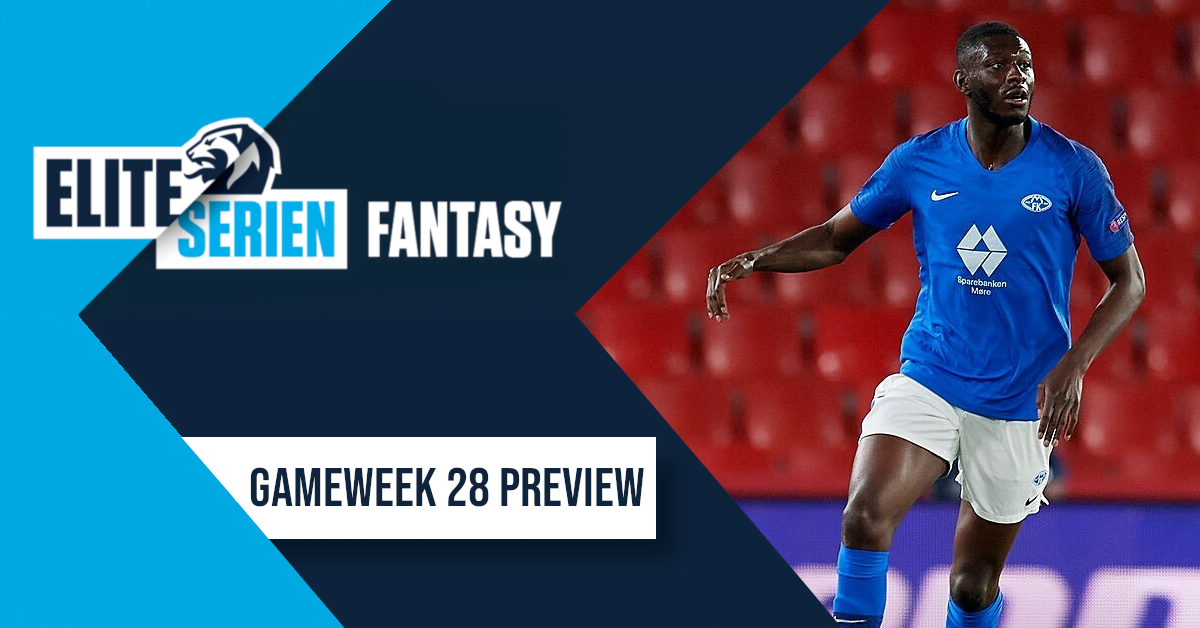 Since Oliver Edvardsen’s return from injury, relegation-threatened Stabæk have won two out of their last three games. He will be crucial if “De Blåa” or “The Blues” are to escape relegation, which is why he is one of Jacob Silkstone’s TOTW picks in Fantasy Eliteserien for gameweek 28.

The biggest punt in last week’s selection was probably doubling up on Vålerenga’s slightly shaky defence (to be fair, all Eliteserien defences are slightly shaky) for a home game against Tromsø. All was going to plan until the visitors scored with only a few minutes of the game remaining. Our next defensive pick, Lars-Christopher Vilsvik, managed to get a yellow card and then limp off injured shortly before the 60-minute mark, continuing to find new ways of dodging points in what seem to be easy fixtures.

Luckily, things went a little better for the rest of the team. Alfons Sampsted secured a clean sheet, while both our strikers scored. The standout pick, though, was Bodø/Glimt midfielder Hugo Vetlesen. Finally handed a regular first-team place, Vetlesen responded with two assists and three bonus points in the win over Lillestrøm. Our picks scored a total of 50 points, with the gameweek average down at 38.

Mjøndalen looked destined for relegation a few gameweeks ago, hammered 7-0 at midtable Haugesund and then defeated in a crucial bottom-of-the-table clash against Tromsø a week later. Since then, they’ve turned things around with seven points from four games, and their defensive record at home has been notably solid. Idar Nordby Lysgård (priced at just 4.0M) was brought into the team after the Haugesund debacle and has been the first-choice keeper ever since, averaging over four saves per game. A home match against Sarpsborg gives him a chance to add another clean sheet to his tally.

Haugesund have kept clean sheets in two of their last three home games, and Benjamin Tiedemann Hansen (5.5M) is the safest route into their defence ahead of a clash with Sandefjord. Tiedemann Hansen has played 90 minutes in every game but one this season, scoring twice. He’s also something of a favourite with the ‘man in the stands’ bonus point system, taking all three bonus points from last week’s 1-1 draw against Viking despite not registering a clean sheet or an attacking return.

Molde’s Sheriff Sinyan (also 5.5M) is another favourite with the bonus point system. He has four bonus points in his last two games, and has now played a full 90 minutes in every match since GW9. Opponents Brann are starting to be cut adrift at the foot of the table, while Molde need a win to maintain any hopes of snatching the title from Bodø/Glimt.

Lillestrøm’s Eskil Edh (4.2M) is our pick of the budget defenders this week. Lillestrøm are on a run of three consecutive clean sheets at home, and Edh has racked up a total of 24 fantasy points in those three games. In fact, he’s scored at least six points every time he starts a home game, except for matches against table-topping Bodø/Glimt and Molde.

With Bodø/Glimt just a couple of wins away from a second consecutive title, it’s time for their star players to come to the fore again. We’re tipping Ola Solbakken (10.5M) ahead of last week’s hero Hugo Vetlesen. The pacey winger has six goals, six assists from 22 starts this season, and an impressive total of 16 fantasy bonus points.

Gjermund Åsen (7.9M) has seemed to have an almost telepathic understanding with Golden Boot contender Thomas Lehne Olsen at times this season, and his return from injury is crucial as Lillestrøm try to secure European football for next season. A home game against Strømsgodset is an enticing fixture: the Drammen-based side have won just once away from home all year.

Haugesund’s Niklas Sandberg (7.4M) is another tempting mid-priced midfield pick. His chance creation stats look promising, and he now has a total of eight assists this season. Opponents Sandefjord have lost all of their last four games away from home, conceding 10 goals in the process.

Since Oliver Edvardsen (6.9M) returned from injury, Stabæk have won two of their last three games. Edvardsen has contributed attacking points in both and remains key to their hopes of climbing away from the relegation zone. A visit to Tromsø in temperatures likely to be well below freezing will be challenging, but all the evidence this season suggests Edvardsen will be up for the fight.

Staying in the relegation battle, Lars Olden Larsen (5.9M) is crucial to Mjøndalen’s fight for survival. He has four goals in his last four games, and opponents Sarpsborg haven’t kept a clean sheet away from home since way back in GW8.

Our attacking selections are shaped by the battle for this season’s Eliteserien Golden Boot. Molde’s Ohi Omoijuanfo (12.4M) currently leads the way with 25 goals in 25 starts and faces bottom-of-the-pile Brann this gameweek.

His main rival, Thomas Lehne Olsen (9.8M), has 22 goals in 26 starts but a higher fantasy points total (primarily due to bonus points rather than extra assists). Lehne Olsen’s fixture against Strømsgodset might seem less favourable on paper, but his opponents have little to play for, whereas Molde face a Brann side fighting for their Eliteserien lives. For that reason, Lehne Olsen is our captain pick this gameweek. 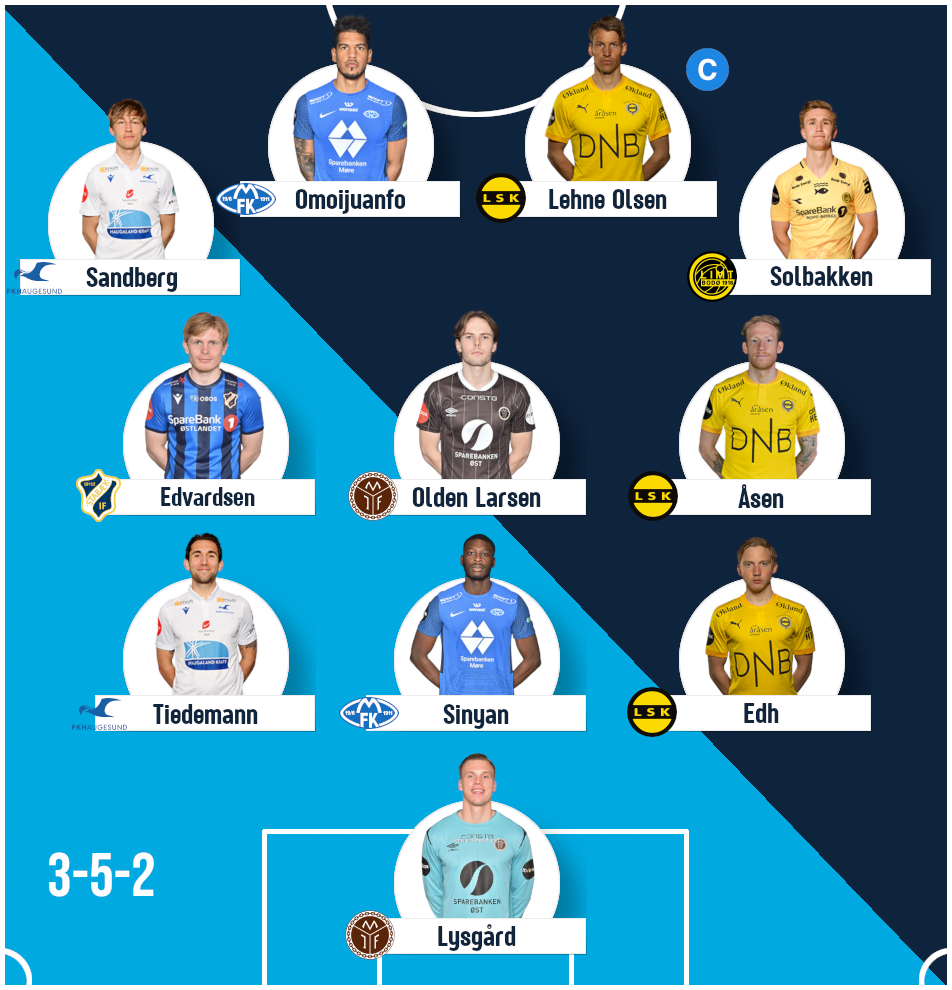