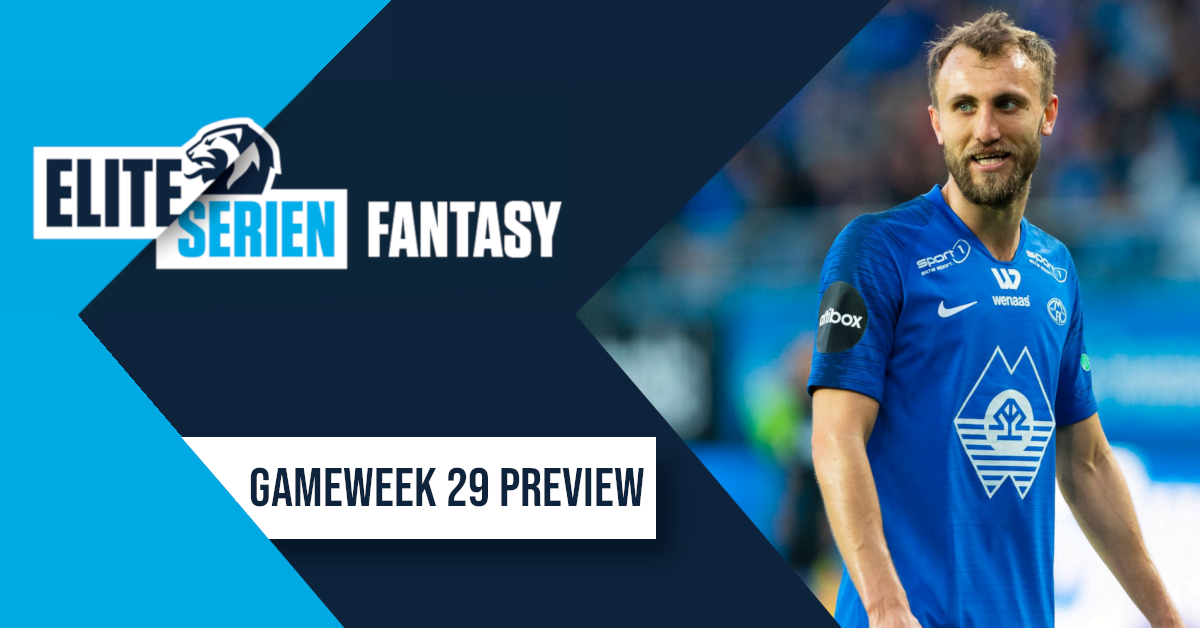 Yesteryear’s fantasy favourite Magnus Wolf Eikrem had an incredibly slow start to the season, with his first goal only coming on matchday 14. Still, at the end of the season, he has come to life with three goals in the same number of games along with an assist and four bonus points, making him a strong consideration with a game against Lillestrøm SK at home in Jacob Silkstone’s Fantasy Eliteserien preview for gameweek 29.

As anyone who dared to go against Salah in FPL this week will be painfully aware, the cornerstone of any strong fantasy football score is a solid contribution from the captain. Our selection last week picked up 34 points from backing Thomas Lehne Olsen at home to Strømsgodset. Ohi Omoijuanfo was an equally legitimate contender for the captaincy, with higher overall ownership, but he blanked against a Brann side scrapping (almost certainly unsuccessfully) for Eliteserien survival. Another example of a 50/50 call that ultimately has a huge implication on overall rank…

Midfield punts Gjermund Åsen and Lars Olden Larsen both chipped in with attacking returns, but Molde defender Sheriff Sinyan limped off early and then watched from the sidelines as his teammates picked up clean sheet points.

Norway in December doesn’t have the kind of weather needed to make a beach trip enticing, so perhaps we need another phrase for the Eliteserien teams with nothing to play for. Metaphorically, everyone from Lillestrøm in fourth down to Odd in fourteenth will be preparing to head to the hytte and warm their feet in front of a winter fire… Bodø/Glimt remain strong favourites to wrap up the title ahead of Molde, while Stabæk are now in pole position to avoid automatic relegation. Mjøndalen and Brann have to win this gameweek and hope that other results go their way if they’re to have any hope of staying up.

Taking all that into account, Molde’s home game against Lillestrøm might be the one to target this week. Lillestrøm have no realistic chance of overtaking Viking for a European place, while Molde absolutely have to win to keep the pressure on Bodø/Glimt.

With regular custodian Viljar Myhra still out injured, Morten Sætra (4.0M) is likely to start again for Strømsgodset in a midtable clash against Haugesund. Strømsgodset have kept clean sheets in two of their last five home games while limiting the top three sides in the league (Glimt, Molde and Viking) to just two goals between them.

Bodø/Glimt could seal the title this week against bottom-of-the-table Brann, although they’ll also need Molde to slip up. This season, Fredrik André Bjørkan (6.6M) has been the best defender in the fantasy Eliteserien game and is back in full training ahead of a crucial game.

The fact that Martin Linnes (5.9M) hasn’t picked up an assist yet this season is more a statistical quirk than a reflection of any lack of attacking threat, and he’s our preferred route into the Molde backline again ahead of a must-win match against Lillestrøm. Linnes often pushes forward into a wing-back role and is on his fair share of set pieces.

Viking’s defensive record is unimpressive so far this season, but Gianni Stensness (5.1M) makes our selection for his aerial threat as much as his chances of picking up a clean sheet against Odd. Stensness already has a goal and an assist from his last three home matches but has been unlucky not to pick up a much larger points haul.

A sublime winner against Brann last gameweek was Magnus Wolff Eikrem (12.4M)’s third goal in his last three games. With Molde fighting for the title, their star player has stepped up and started delivering when it matters most. Wolff Eikrem also has an assist and four bonus points from that recent run of form: when he’s fully fit, he remains one of the best players in the league.

The decision to back Wolff Eikrem forces us to back a cheaper option from Bodø/Glimt. Ola Solbakken remains the obvious route into their midfield if you can afford him, but Hugo Vetlesen (7.2M) should be fit to start again and has four goals and two assists from his last five games.

Jonathan Lindseth (6.9M) has had a fantastic second half of the season for Sarpsborg, with hauls in three of his last four home games. Tromsø will be the visitors this week, and they haven’t kept a clean sheet away from home since Gameweek 7.

Joe Bell (5.2M) has a total of 22 bonus points so far this season, more than any of his Viking teammates (even the free-scoring Veton Berisha). The New Zealand international has also contributed eight assists and takes most of the set pieces.

With funds limited, Tobias Fjeld Gulliksen (4.7M) is an interesting budget option. He’s been quiet since amassing 19 fantasy points in the 6-0 hammering of Molde, but all five of his goals this season have come at home, and opponents Haugesund have one of the most porous defences in the league: of the clubs currently in the top ten, only Viking have conceded more.

Aside from trying to keep Molde’s title hopes alive, Ohi Omoijuanfo (12.3M) also has a personal incentive to rack up the goals against Lillestrøm. Lehne Olsen’s hat-trick last gameweek, means the two strikers are now level on 25 goals each, and Ohi will be eager to secure the Golden Boot in his final season in Norway. He captains our selection again this week.

Lehne Olsen is a solid pick again, for similar reasons to Ohi, but Viking’s Veton Berisha (11.2M) takes the final spot in our selection. Berisha has scored in three consecutive games, and Viking know that one more win will be enough to secure their place in Europe next season.