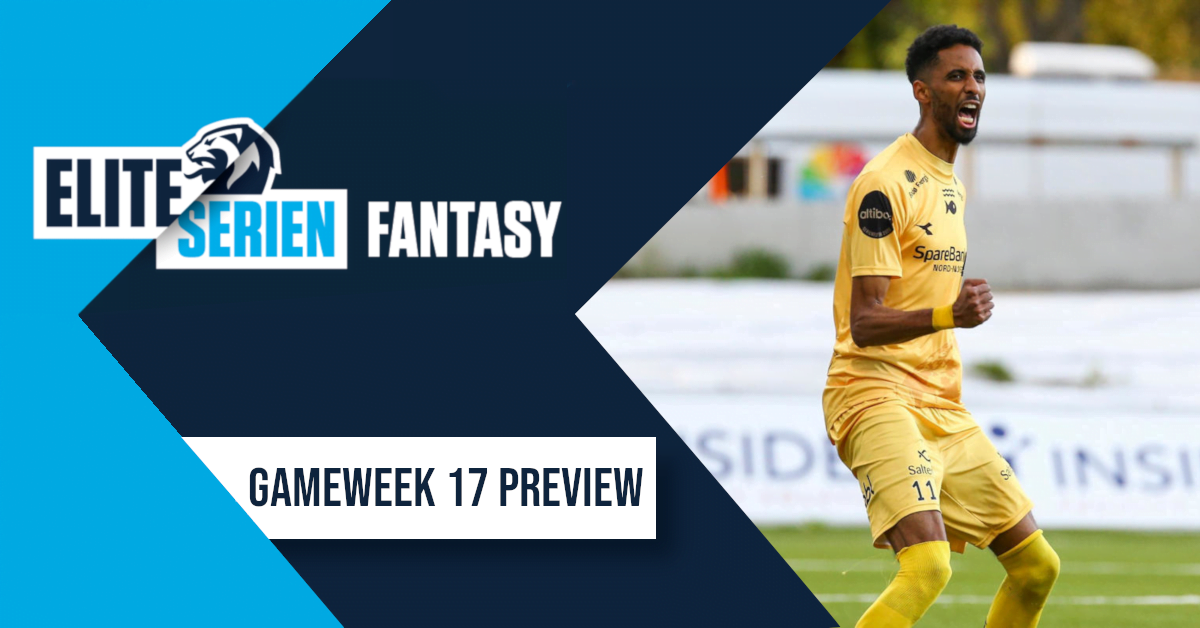 Amahl Pellegrino announced his return with a 17-minute hattrick off the bench last week and is one of the best captaincy options for gameweek 17 in Fantasy Eliteserien according to tipster Jacob Silkstone.

As is now traditional, we’ll begin with a quick glance back at the previous gameweek. For the second consecutive round, our picks didn’t quite live up to expectations. Again, the overall average was atypically low (just 35 points) and again nobody from our team of the week managed to get on the scoresheet. Hove and Normann Hansen both provided assists, while Andersson registered a clean sheet in a dominant Rosenborg performance.

We did highlight Amahl Pellegrino as a player to watch, but added that “there’s a risk he makes his home debut from the bench.” He did make his home debut from the bench, getting just half an hour on the pitch against former club Kristiansund, but that didn’t really matter: in that half an hour, he scored two tap-ins and a slightly dubious penalty (if you detect a note of bitterness, you’re not wrong…) to finish as the gameweek’s highest-scoring player.

Molde have been the league leaders since GW8, but Bodø/Glimt have closed the gap to just two points and we can expect an exciting title race. With Molde out of Europe, they can afford to focus fully on the league, whereas Bodø/Glimt also have the group stages of the new Europa Conference League to negotiate. Rosenborg have had a quietly impressive summer transfer window and could still be dark horses for the title — after all, they’ve won Eliteserien in four of the past six seasons.

If you’re setting up your Fantasy Eliteserien team for the long run (on the second wildcard, for example) it’s worth remembering that Stabæk and Strømsgodset have a blank in GW19 followed by a double in GW20. Although no further doubles are scheduled at the moment, don’t rule out some additional changes to the fixture list between now and the end of the season.

After Kristoffer Klaesson left for Leeds in the summer transfer window, Christian Kjetil Haug (4.9M) has been the preferred alternative between the posts for Vålerenga. He’s already picked up a couple of save points from his previous home game, while opponents Stabæk drew a blank last time they faced Vålerenga in the league. It’s far from a guaranteed clean sheet, but probably worth a punt.

Sarpsborg return to action after a blank gameweek, and we’re backing captain Joachim Thomassen (5.6M) as a possible source of points at both ends of the pitch. Sarspborg have four clean sheets in eight home games so far this season, and Thomassen has chipped in with a couple of goals from left-back. Opponents Sandefjord have failed to score in two of their last five away games.

Fredrik Bjørkan (6.1M) is now fully fit again, and is our way into the Bodø/Glimt defence as they travel to relegation-battling Tromsø. Bjørkan offers a consistent attacking threat and has been slightly unlucky to register only four assists so far this season (still an impressive haul for a defender); Tromsø haven’t won at home all season, scoring just three times in their last five games in front of their own fans.

We’re ready for another punt on Alexander Stølås (6.3M) as Haugesund travel to face a Brann side still firmly rooted to the bottom of the table. Stølås has yet to recapture his best form since returning from a long-term injury, but a screamer against Molde a couple of gameweeks ago was a reminder of what he’s capable of. In his last injury-free season, he contributed four goals and eight assists.

After hesitating over whether to back Amahl Pellegrino (12.0M) in last week’s picks, there’ll be no hesitation this time. Pellegrino came off the bench again in Glimt’s Conference League play-off victory on Thursday evening, but he should be ready for his first start in the North Norwegian derby against Tromsø. Even if he doesn’t get the full game, he’s one of the most lethal finishers in the league and represents a genuine captain option in Fantasy Eliteserien.

Great things were expected of Stefano Vecchia (9.2M) when he arrived at Rosenborg, only for his season to be disrupted by injury. He’s now back to top form, adding a European goal to the two he scored against Odd in the last Eliteserien gameweek. If he can stay fit, expect his fantasy ownership (currently just 2.9%) to rocket upwards.

League leaders Molde are back in action against Kristiansund, and Ola Brynhildsen (7.9M) has been their most consistent midfield option so far this season. After scoring twice in the opening two gameweeks, he’s ticked over with seven assists since, and his rotation risk has been diminished by Molde’s exit from Europe.

Kristoffer Velde (8.8M) is our Haugesund attacker of choice ahead of the game with Brann. His last six games have yielded two goals and four assists, and Brann have only managed a single clean sheet at home all season.

Lastly, we’ll keep our faith in Vidar Ari Jónsson (5.5M) as a budget midfield option. He was unlucky to register only a single attacking return last gameweek, and if Sandefjord are to score away at Sarpsborg then there’s a strong chance he’ll be involved.

Ohi Omoijuanfo (12.2M) has towered head and shoulders over the other forwards in Eliteserien this season, with 18 goals so far. Kristiansund away isn’t the easiest fixture, but it would take a brave fantasy manager to bet against him adding to his points total (the highest in the game by a considerable margin).

With budget constraints steering us away from the more obvious options (Thomas Lehne Olsen and Erik Botheim), Brann’s Aune Heggebø represents good value at just 6.0M. Heggebø had an impressive record at the youth level, and has stepped up ever since Daouda Bamba left the club during the summer transfer window. With two goals in his last two games, he’ll be key to any hopes Brann have of climbing out of the relegation zone.

Fantasy Eliteserien Team of the Week for Gameweek 17