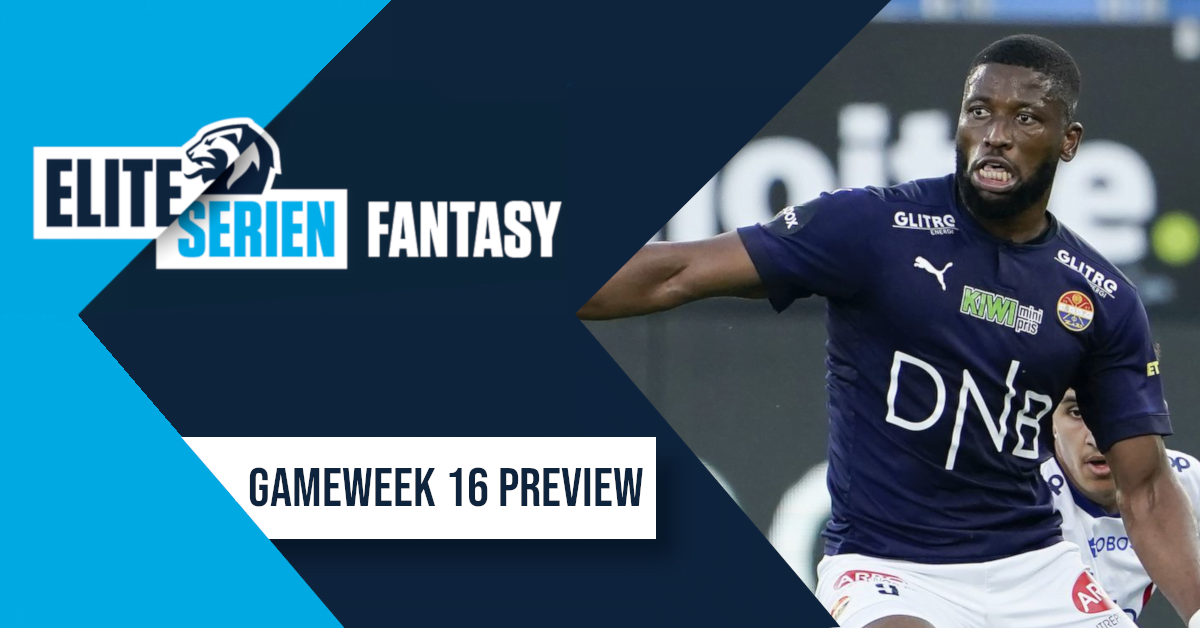 Fred Friday might’ve not had his best performance last time out but he boasts an impressive home record and is still the best captaincy choice for the week in Fantasy Eliteserien according to Fantasy Tipsters’ Jacob Silkstone.

After the 138-point high of GW14, our Tipsters Team of the Week came crashing down to earth last time around. It was a tough gameweek for just about everybody: the average score was only 39, and the five highest-owned players in the game scored just six points between them (not helped by Patrick Berg missing a penalty and Ohi Omoijuanfo missing out for baby-related reasons; congratulations to Ohi and commiserations to Berg).

Of our eleven picks, only Jónsson and Gjertsen contributed any attacking returns, with a meagre assist each. Rosenborg’s Adam Andersson was unlucky not to have a fantasy assist awarded, but did come away with a couple of bonus points in recognition of an outstanding performance.

With a blank from captain Fred Friday, our picks scored a disappointing 31 points. The pressure is on to bounce back in GW16, the first round of the fantasy cup.

The Fantasy Eliteserien landscape has altered significantly in the space of a single week. With Molde’s defeat to Viking throwing the title race wide open, both of the two teams in serious contention have used the transfer window to strengthen their squads.

Reigning champions Bodø/Glimt’s key signing is Amahl Pellegrino. Pellegrino was a fantasy phenomenon during his time at Kristiansund, with hat-tricks in both of the last two seasons and a total of 25 goals last time out. After a short stint in Saudi Arabia, he’s back in Eliteserien and priced as a 12.0M midfielder in the fantasy game.

Current league leaders Molde have made two formidable signings, attack-minded right-back Martin Linnes (6.0M) from Galatasaray and winger Rafik Zekhnini (8.0M) from Fiorentina. Both are intriguing fantasy options, and Molde’s exit from the Europa Conference League lessens the rotation risk previously attached to their key assets. (Bodø/Glimt and Rosenborg, on the other hand, have crucial play-off matches in Europe coming up either side of their GW16 fixtures.) Don’t rush to buy them just yet, though: Molde have a blank gameweek coming up (their fixture with Sarpsborg was pushed forward to GW7 because of their European commitments, so Sarpsborg will also be blanking this week).

Sandefjord’s Jacob Storevik (5.0M) is between the posts for us ahead of a home game against struggling Tromsø. Sandefjord have conceded just twice in their last five home games, and Tromsø have gone goalless in two of their previous four away games. The signs point to a Sandefjord win… but this is Eliteserien and form can be misleading, so don’t be too surprised if Tromsø suddenly transforms into prime Barcelona.

Stabæk’s defence have been hugely disappointing this season, with just two clean sheets so far. Having said that, their form has picked up after a managerial change and Sturla Ottesen (4.6M) offers a budget-friendly alternative at the back as they prepare to face relegation-threatened Mjøndalen.

Although Brann bounced back from a scandal-hit week to scrape a win against Sandefjord last time out, they remain rooted to the bottom of the table. Facing a side that hasn’t won away from home all season, we’ll be backing Strømsgodset’s Lars-Christopher Vilsvik (4.6M) to return points. He’s a regular set-piece taker too, and already has three assists this season.

Christian Borchgrevink (6.1M) returns from suspension needing five points to reclaim his spot as the highest-scoring defender in Fantasy Eliteserien this season. With three goals and four assists so far, he offers plenty of attacking potential even if Vålerenga fail to keep a clean sheet at home to midtable Viking.

Having been unlucky not to get any attacking returns from him last week, we’ll stick with Adam Andersson (still 5.9M) for Rosenborg’s home game against Odd. Rosenborg have kept clean sheets in both of their last two home games, while Odd failed to score in both of their previous two away games and lost their star striker in the transfer window.

In midfield, it’s tempting to recommend Amahl Pellegrino right away. There’s a risk that he makes his home debut from the bench, though, so our Bodø/Glimt midfield pick is Ulrik Saltnes (10.7M). Saltnes has more fantasy points than any other Glimt player this season, and scored twice in their European game on Thursday evening.

Oliver Edvardsen (7.2M) blanked last week after four consecutive scores of 8 points or over, but he’ll be expecting to get back on the scoresheet in Stabæk’s home game against Mjøndalen. In his previous two home games, Edvardsen has returned a total of 27 fantasy points.

Sandefjord’s midfielders have been the surprise heroes of the current fantasy season, with both Vidar Ari Jónsson and Kristoffer Normann Hansen in the top three points scorers overall. It’s hard to choose between them, but we’re backing the in-form Normann Hansen (6.1M) to pick up where he left off last week.

Johan Hove (8.1M) is the second of our Strømsgodset trio ahead of the home game with Brann. xG fans will be pleased to hear that only title favourites Molde have a higher xG than Strømsgodset in home matches this season, and Hove is a key member of an attack that will expect to feast on one of the worst Eliteserien defences.

For similar reasons, Fred Friday (8.5M) lines up as the first of our two strikers. With four goals and two assists in his last four home games, he possesses an enviable record in front of his own fans.

There are a few question marks over Rosenborg’s willingness to put out a full-strength team between two crucial European games, but we’re willing to take a calculated risk on striker Dino Islamovic (10.5M), who’s finally hitting form after a slow start to the season. He has three goals in his last four games, together with five bonus points.

Eliteserien Fantasy Team of the Week for Gameweek 16 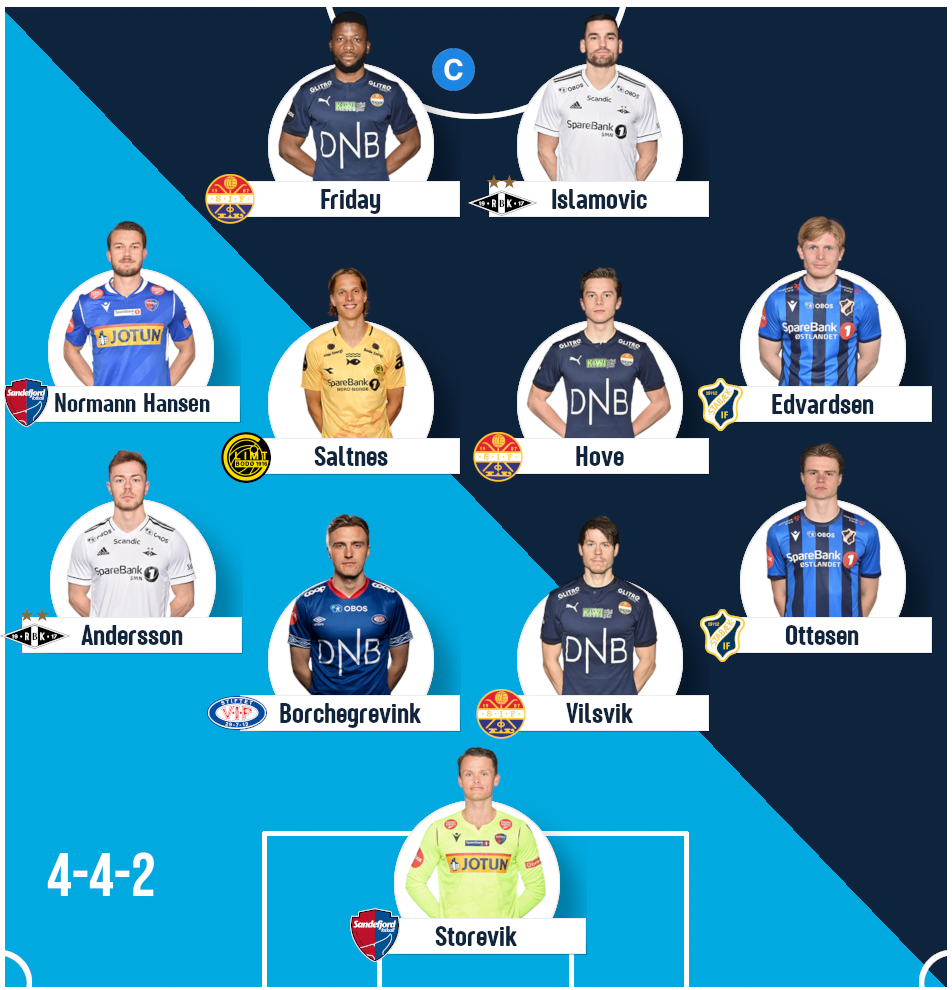