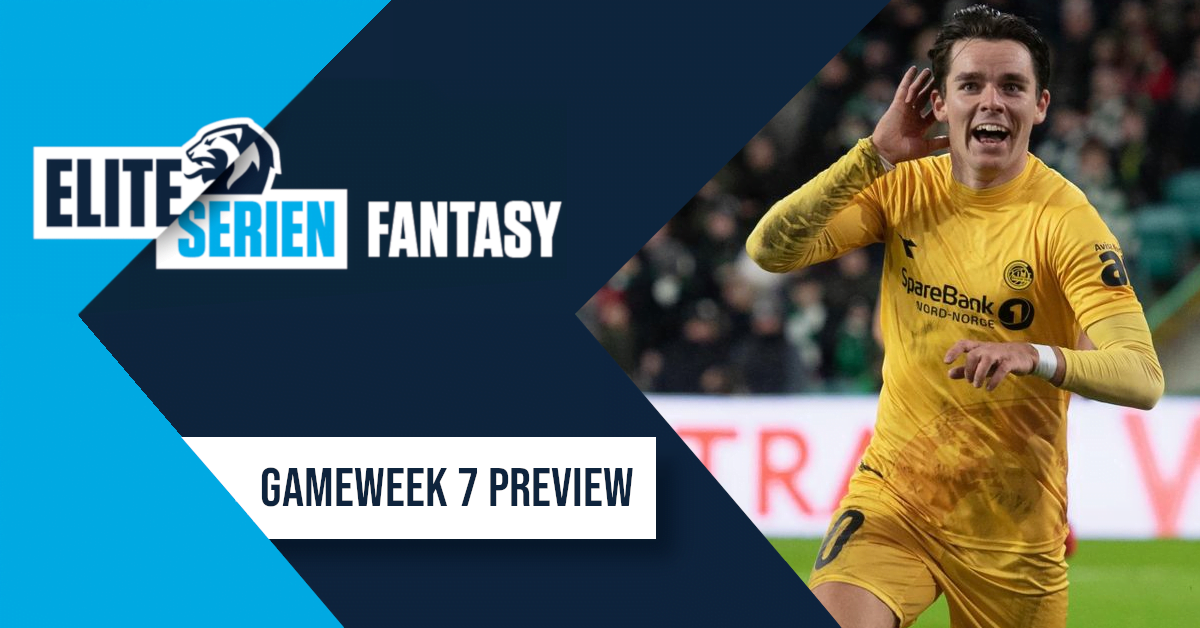 Champions FK Bodø/Glimt have had a slow start to the season, but tipster Jacob Silkstone believes that it is too early to write them off, especially with an away trip to FK Haugesund—one of the worst defences in the league—in gameweek 7 of Fantasy Eliteserien.

In Norway, the 16th May football games are traditionally an occasion for the home team to put on a masterclass in front of a packed stadium before being cheered in the National Day parade the following morning — at least, that’s how it’s supposed to work in theory. In practice, some May 17th champagne breakfasts must have tasted sweeter than others. Bodø/Glimt’s underwhelming start to the domestic season continued, needing a stoppage-time equaliser to salvage a draw against rivals Tromsø, and Odd were thumped 4-0 against struggling Haugesund. Even league leaders Viking didn’t have it all their own way, with Jerv holding out well until Erlend Hustad’s moment(s) of madness reduced them to ten men.

Our Team of the Week relied mainly on clean sheets from Patrick Gunnarsson, Markus Henriksen and Igoh Ogbu to beat the gameweek average. A Hugo Vetlesen goal disallowed for the most marginal of possible offsides and an early substitution for Zlatko Tripic were particularly hard to watch, even if another haul for captain Veton Berisha eased the pain. Our final score of 52 was nine ahead of the overall average in a week where the template struggled slightly.

Sarpsborg’s Anders Kristiansen (5.0M) ranks fourth in the league for saves, but his team’s defensive stats are noticeably better at home. Despite a tough fixture programme, they’ve conceded just two in three games in front of their own fans, while opponents Aalesund have failed to find the net in three out of four away fixtures. A reasonably-priced keeper with potential for both saves and a clean sheet.

Molde representation seems like a must ahead of a home game against bottom-of-the-league Kristiansund. Martin Linnes (7.3M) has been Eliteserien’s most dependable defender so far, starting all seven of his side’s games and blanking just twice.

Lillestrøm’s defence has been even more dependable than Molde, although it’s perhaps worth pointing out that they’ve yet to keep a clean sheet on their travels. Igoh Ogbu (5.3M) has plenty of set-piece threat and more bonus points than any other defender in the game except Linnes and Kurucay, so he can be included even if you don’t back Lillestrøm to shut out Sandefjord.

Bodø/Glimt have the second-lowest xG conceded total in the league: on paper, they’re among the strongest defences, but they’ve yet to keep a single clean sheet this season. One upside of that statistic is that their defenders remain at (or slightly below) their starting prices, and both Sampsted and Wembangomo are excellent picks. We’re going with Brice Wembangomo (6.0M) this week, given his marginally superior attacking numbers. Expect that first clean sheet of the season to arrive very soon.

Rosenborg have stuggled early on, but they showed signs of turning a corner in a classy 3-0 win over Sandefjord last gameweek. The key to their revival is Stefano Vecchia (10.3M), who scored twice and took maximum bonus points. Vecchia’s injury record remains a concern, but this should be the right time to invest in him ahead of two favourable fixtures.

Incredibly, Hugo Vetlesen (8.8M) has now returned in just one of his six games this season. Still, his price continues to climb — perhaps a reflection of the fact that he passes ‘the eye test’ in virtually every match. He was unlucky not to be given a goal against Tromsø, and we’re happy to not only keep him in our team for this gameweek but also hand him the captain’s armband.

Tobias Heintz (7.6M) is back from injury for Sarpsborg. He’s returned two goals and two assists from his four starts so far this season, and also has a total of seven bonus points. Provided he stays fit, we’re tipping him as the best route into the Sarpsborg attack this season.

Former Fiorentina player Rafik Zekhnini (7.4M) was given his first start of the season in GW6, scoring a goal against Aalesund and receiving two bonus points. He was subbed early in that game and rested completely for the cup match in midweek (with Kaasa starting), indicating that he should be in line for another start at home to Kristiansund. Magnus Wolff Eikrem remains the standout Molde midfield option, but Zekhnini’s significantly cheaper price allows plenty of upgrades in the rest of the team without losing out on too much attacking threat.

Budget-friendly Emil Breivik (5.5M) completes our Molde triple-up. He continues to lead his teammates for big chances created. For the moment, he’s still a differential — his overall ownership is under 7% at the time of writing, but it would be a surprise if that didn’t keep rising over the next few weeks.

Lillestrøm’s Akor Adams (8.2M) put in a huge performance at home to Sarpsborg in GW6, taking all three bonus points. He would have appeared on the scoresheet if not for a very tight offside call, and he’s looking more and more like a worthy successor to Thomas Lehne Olsen. Opponents Sandefjord are ranked third in the league for xG conceded.

Eight games, six goals, four assists, thirteen bonus points, more total points than anyone else in the game. Veton Berisha (12.0M) remains close to essential status, but there are a few factors that make us reluctant to captain him this week. Opponents Tromsø have surprisingly strong defensive statistics, performing extremely well against Bodø/Glimt last time out and conceding fewer xG than any other team in the league. Berisha has scored in one out of his three away games so far: a punt against him is a huge risk with his ownership now above 70%, but this might be the week to do it… 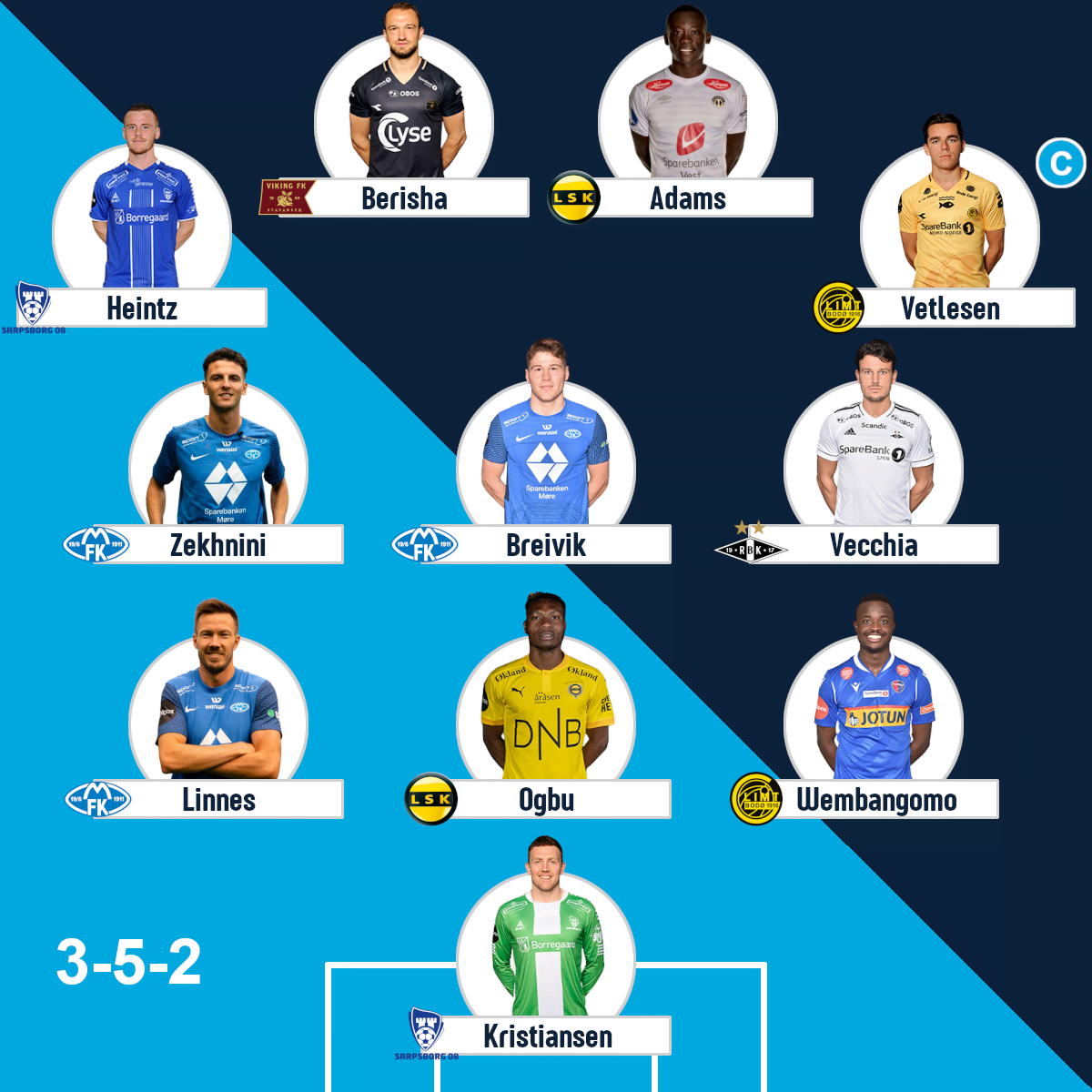