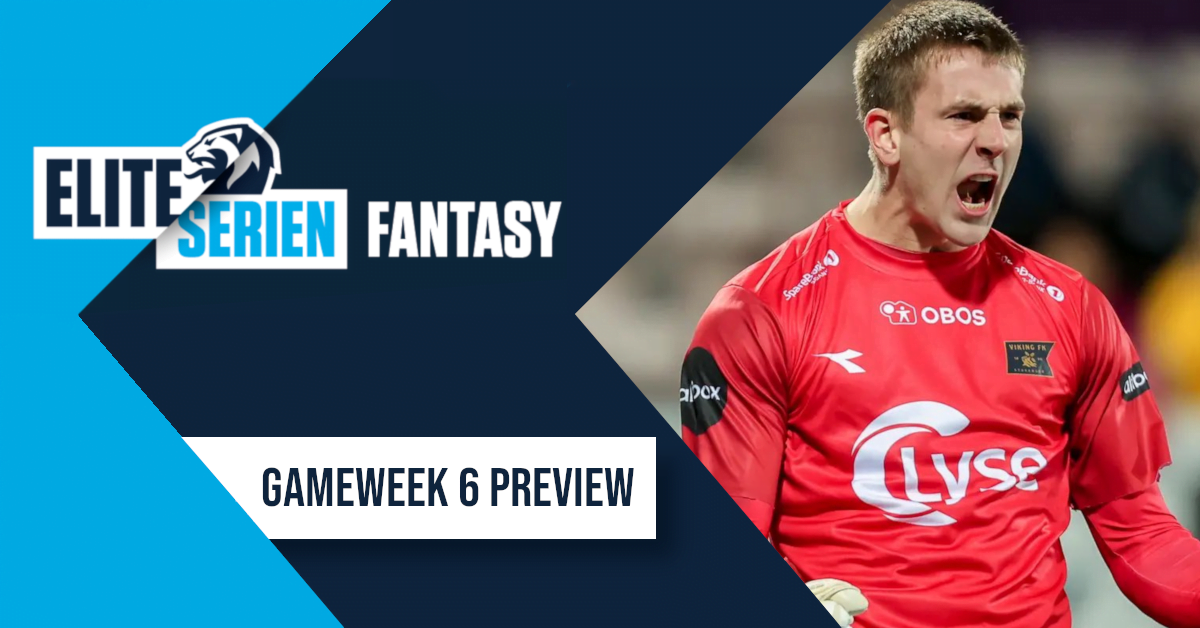 Newly promoted Jerv’s attacking woes continue as they have scored the least goals in the league so far and tipster Jacob Silkstone believes that Viking’s Patrick Gunnarson is the keeper to target in GW6 of Fantasy Eliteserien having conceded only one goal in four home games so far.

Maybe it feels slightly too early in the season to decide which chip strategy was best, but DGW5 certainly rewarded anyone who played ‘Rich Uncle’. We recommended two possible line-ups last week, one for Rich Uncle and one within the usual limited budget. While our regular team scored 111 points (the overall average was 80), the Rich Uncle team hit 134 – even assuming we wouldn’t have made a change after hearing the injury news on Zlatko Tripic closer to the deadline. Molde midfielders Magnus Wolff Eikrem and Ola Brynhildsen both hauled, as did the usual suspects from the Vålerenga attack. More surprisingly, Strømsgodset shrugged off a 5-0 home defeat against Sandefjord to deliver clean sheets against two of the strongest teams in the league (although that may be overly generous to Rosenborg?).

Coupled with the success of ‘Spissrush’ (All Out Attack) in GW4, there’s a huge advantage already for those who’ve played their chips effectively in the early weeks of the season. GW6 brings another chip into consideration: the first wildcard offers an opportunity to move out some of the DGW players in favour of better long-term picks from the likes of Bodø/Glimt and Molde. On the eve of Norway’s national day, most of the bigger clubs have tempting home fixtures and a lower risk of rest and rotation. It’s also worth noting that 14 of the 16 teamsheets (all except Vålerenga and HamKam) will be out ahead of the deadline.

For a second consecutive week, Viking’s Patrick Gunnarsson (still 5.1M) takes the goalkeeper’s spot for our team. Opponents Jerv have the second-lowest xG total in the league, the second-lowest number of big chances created, and no goals from their two away games so far. Meanwhile, Viking have conceded just once in four home games.

We might be a week too late on Bodø/Glimt’s Icelandic right-back Alfons Sampsted (5.9M). After a quiet start to the season, Sampsted smashed in an equaliser against Lillestrøm in GW5 and was also awarded two bonus points by the ‘man in the stands’. The fact that Glimt have yet to keep a clean sheet is more of a statistical quirk than a reflection of any major weakness in their defence: they’re now free to concentrate entirely on the league, and a home game against Tromsø should be eminently winnable.

Strømsgodset lost 5-0 at home to Sandefjord, then beat Rosenborg 3-0 the following week. By Eliteserien logic, Rosenborg should beat Sandefjord without too many problems this gameweek… Although they’ve been disappointing so far under Kjetil Rekdal, Rosenborg haven’t conceded a goal at home this season. Markus Henriksen (6.0M) is the cheapest reliable route into their defence, although a punt on Sam Rogers could be interesting if he starts (as predicted on the fan forums this week).

Towering centre-back Igoh Ogbu (5.2M) returns to our team ahead of Lillestrøm’s home game against Sarpsborg. His goalscoring purple patch may be over, but he has more bonus points than any of his team mates this season and should be a nailed-on starter.

Odd’s Josef Baccay (4.5M) is no longer a guaranteed starter, but this week we have the advantage of checking the team sheets before finalising our team. Having been on the bench in midweek, we’re optimistic that he regains his place for a home game against Haugesund in which Odd are expected to control possession and Baccay’s attacking contributions will be needed. When he plays, he remains the best defender at his price.

A fit-again Zlatko Tripic (9.7M) emerged from the bench for the final fifteen minutes of Viking’s game against Strømsgodset last week. Almost immediately, he set Berisha up for what would have been a match-winning goal: frustratingly from a fantasy perspective, Berisha had strayed offside. Despite starting only four of Viking’s seven games, Tripic still leads the rest of the league in just about every chance creation metric. Check the team sheets before bringing him in for GW6, but he’s a must-have if he starts.

Even after blanking in four of the five games so far, Hugo Vetlesen (8.7M) remains one of the biggest bargains of the season. His one haul came at home, with two goals and an assist against Vålerenga. With Ulrik Saltnes serving a suspension, Vetlesen’s price tag makes him the most appealing option from Bodø/Glimt midfield this gameweek.

Despite a slightly disappointing lack of returns (just one assist in six matches), we’re sticking with Osame Sahraoui (8.5M) as our route into the Vålerenga midfield ahead of a home game against newly-promoted HamKam. Interestingly, Sahraoui has been given maximum bonus in both games in front of his own supporters so far, despite failing to register an attacking return.

Unexpectedly, 21-year-old Emil Breivik (5.4M) has created more big chances (and more chances in general) than any other member of the Molde squad so far this season. That creativity has already yielded five assists, and he seems to have secured a regular starting role – playing the full 90 minutes four times in the last five games. At his price, he could end up being a season-keeper.

Viking striker Veton Berisha (12.0M) became the first player to cross 50 points in this year’s Eliteserien Fantasy game. His ownership has inched up to 68% at the time of writing, and he leads the league for both xG and actual goals. As close to essential status as any player is likely to get this season – he’s our captain again for GW6.

Odd’s Tobias Lauritsen (8.4M) is currently fifth in the league for xG, but only has attacking returns in one of six games. Several strikers have already feasted on the shaky Haugesund defence, and we’re backing Lauritsen to start converting some of his chances this week. 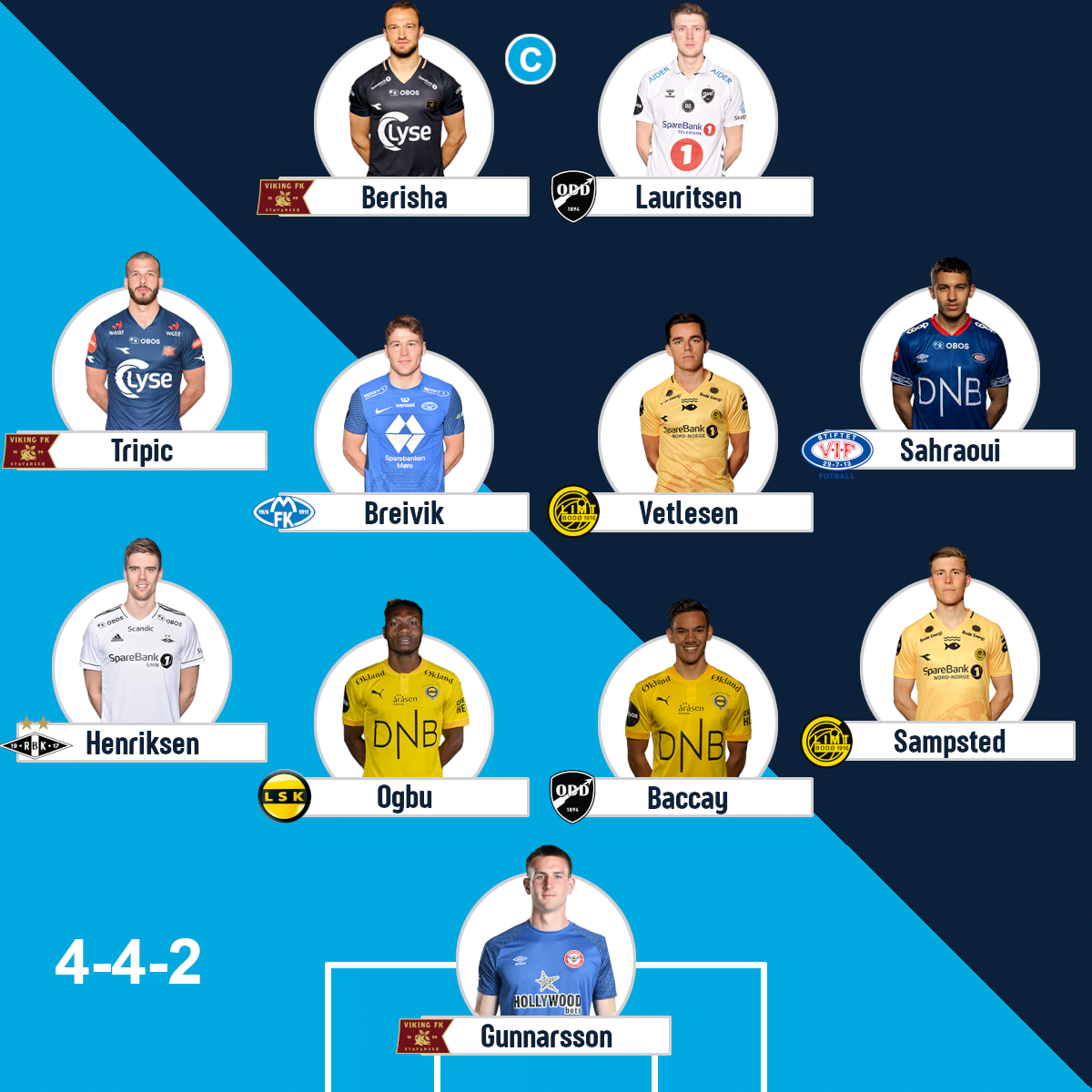