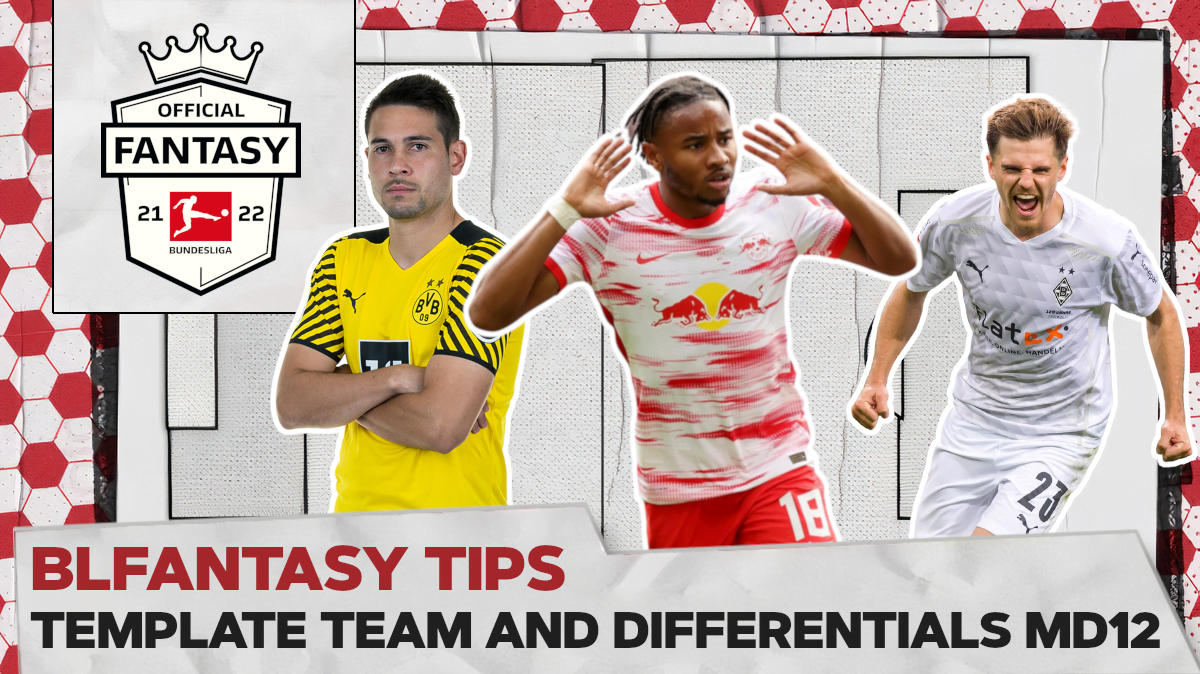 Fantasy Bundesliga Matchday 12 is on the horizon, and it is time to set our fantasy teams for upcoming matchdays with unlimited transfers. In this article, I have picked the template players who should form the base of your fantasy teams and deliver consistent points. It can happen that sometimes some of the picks can be out of your budget so that they can be replaced by players mentioned in other notable picks.

The best forward in the game by far; he can score against any opponent and is on good form, scoring in each of his last seven games. He is a must-have pick unless you want a red arrow.

The FC Köln marksman has recently been in great goal-scoring form, scoring eight goals in 11 starts, including a brace in the last game against Union Berlin. With favorable fixtures against  Mainz, Gladbach, and Bielefeld, he can continue his scoring streak.

The Mainz forward is the leading scorer in the team with five goals in his 10 starts and finishing off the chances that he gets clinically. He is a much-improved player from previous seasons, and with good fixtures against FC Köln and Stuttgart, we can expect more goals from him in the coming weeks.

Goretzka has been in good form in the recent matches and is heavily involved in the attacking play making runs from midfield and finishing chances in the box. In the last match against Freiburg, he took three shots, scoring once, striking the post twice in only 70 minutes, and returning 19 points.  With 19, 12 & 17 points in his last three starts and facing an Augsburg team who have conceded 20 goals in their 11 matches, another double-digit return is on the horizon.

Hoffman has been the talisman for this Gladbach team and is the leading scorer in the team with four goals. He is involved in most of their attacking play, creating key passes and setting up chances (xG -3.9 xA-3.0), including the freekicks and corners. Gladbach have a home game against Furth, the bottom-placed team that has conceded 29 goals, the highest in the league, and could see Hoffman getting a good return in fantasy.

Leipzig midfielder Christopher Nkunku has been in great form with five goals and three assists this season and has been the main man for Leipzig in attack.  With expected goals (xG) of 5.2 and expected assists (xA) of 3.3, a high ceiling of fantasy points can be expected in all the upcoming matches.

This Leverkusen midfield maestro is having a great season with four goals and six assists and will need to carry Leverkusen in the absence of Schick and other notable absentees in midfield. However, a match against promoted Bochum looks very promising for fantasy points on MD12.

The Serbian is picking up form after his injury, and after their brilliant performance in beating Portugal to qualify for the World Cup, he will be on a high and will be vital to turning around Frankfurt’s season. Kostić is averaging almost 10 fantasy points per match and can deliver fantasy points irrespective of opponents making him fixture proof.

Günter, who plays as a left-back and sometimes left-wing-back for Freiburg, is the highest-scoring defender in the game. He also takes corners and set pieces from the left and is an attacking threat from the crosses. With favorable fixtures against Frankfurt and Bochum, he is an excellent player to own.

Scally playing right-back for the Gladbach team is the best budget enabler who enables us to pick high-priced players in other positions. Still, he is more than just an enabler with a goal and an assist, making him a player to own irrespective of fixtures.

Playing on the left as a wing-back for Union Berlin, Niko has chipped in with three goals and two assists, making him one of the highest-scoring defenders in the season. He is only 4.7M and is performing almost as a premium defender, and with favorable fixtures in upcoming rounds, he is a lock for most teams.

One of the top defenders in the Bundesliga and playing on the left in an attack-minded Dortmund team, Guerriero contributes with goals and assists. He is on free kicks, corners, and the first-choice penalty taker in the absence of Haaland. There is a fitness concern as he is coming off an injury, but he should make a place in our squads if he is fit to play.

This Leipzig left-back has been one of the best fantasy defenders over the years, though this season has not been his best in terms of scoring mostly due to Leipzig’s unsettled formation and tactics. However, now starting regularly in the first team and fixtures against Hoffenheim, who are defensively leaky, could see Angeliño deliver a haul in Fantasy Bundesliga.

Note: I am not picking any Bayern defenders as there is uncertainty regarding a start for Davies and other defensive positions, but going for them on early kick-off game can also turn out to be good.

The highest scoring keeper in the game, averaging almost eight points per game, and playing for a good defensive side in Freiburg, who have conceded the least goals seems like a natural choice, and the fixtures are also favorable. 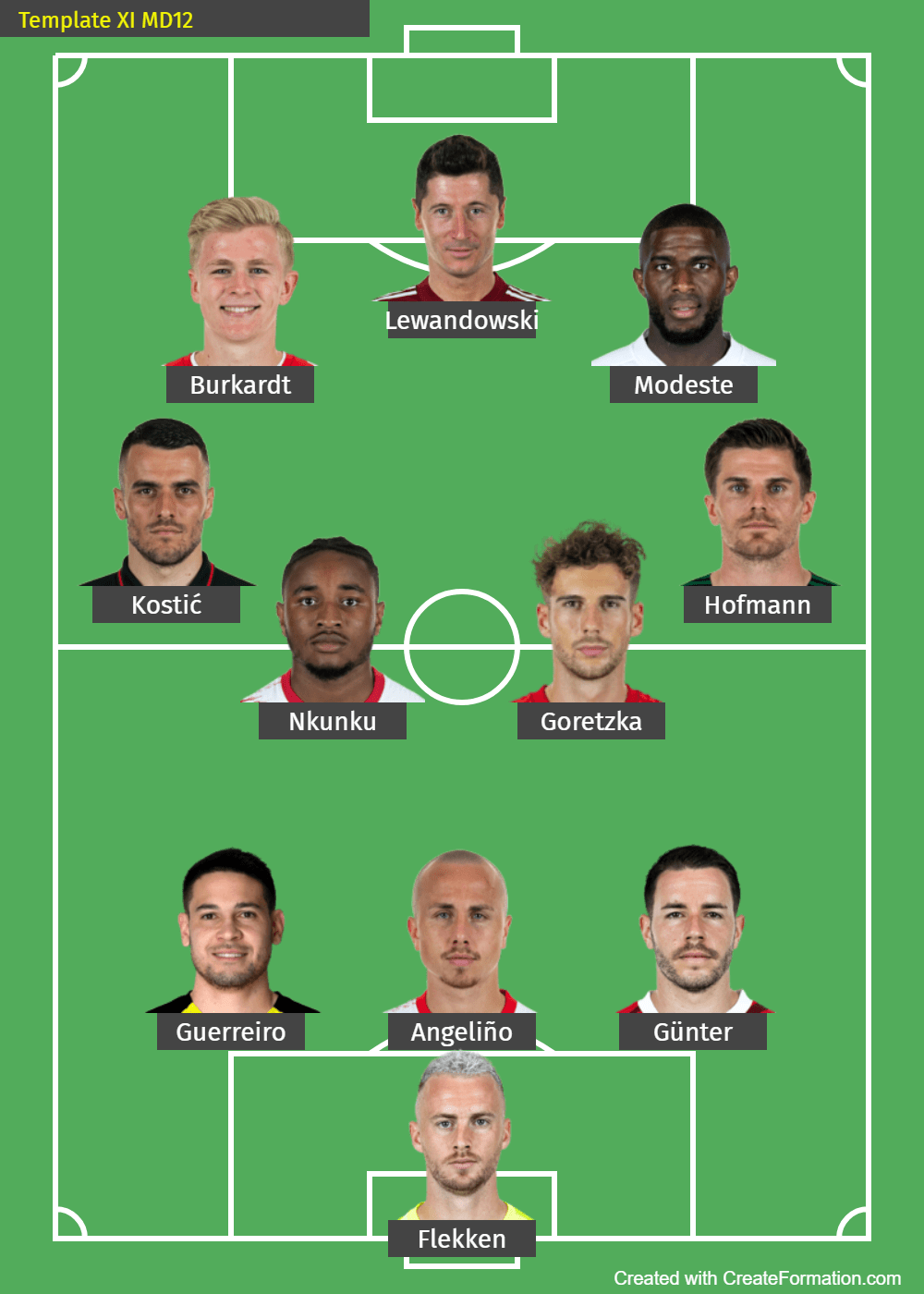