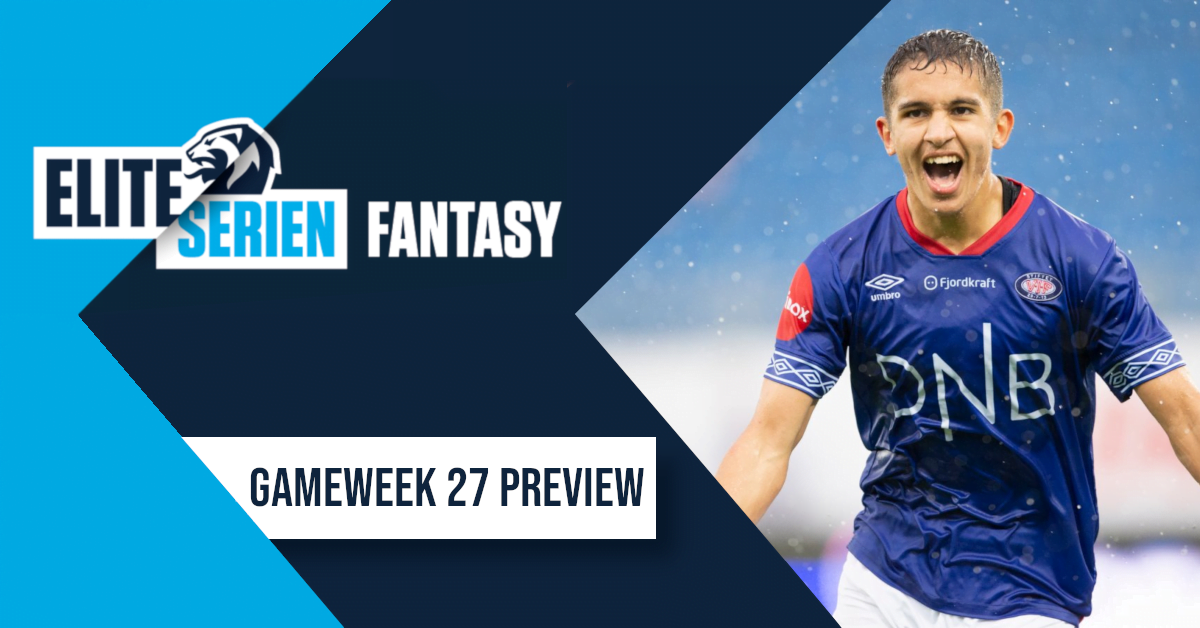 An away matchup against the world’s northernmost top-tier football team – Tromsø IL – won’t be the easiest with the harsh weather in the arctic north. Still, Tipster Jacob Silkstone thinks that Vålerenga can get the job done as they push to secure a European spot in gameweek 27 of Fantasy Eliteserien.

At the start of last week’s article, we highlighted Sarpsborg’s Jonathan Lindseth as one of the key players to bring in for GW26. Lindseth had a favourable matchup against a Stabæk side with the worst away defensive record in the league, and he duly delivered 15 fantasy points for his owners.

Unfortunately, the rest of our picks underperformed. Veton Berisha was the only other player to score, and Zlatko Tripic was the only other player to return any bonus points. Captain Ohi Omoijuanfo squandered several gilt-edged chances to get on the scoresheet against Sandefjord, while none of our defenders managed to keep a clean sheet. Our selection scored a disappointing total of 40 points, although that was still five ahead of the gameweek average.

Christian Kjetil Haug (4.9M) has been Vålerenga’s first-choice keeper ever since Klaesson left for Leeds in the summer transfer window. With two clean sheets in his last two games, he’s returned a total of 15 fantasy points, and he now faces Tromsø. Eliteserien’s northernmost team have now opened up a sizeable gap to the relegation places: on paper, this looks like a predictably one-sided clash between a team chasing a European spot and a team that should be ‘on the beach’ (not that you’d want to visit a beach anywhere in Norway this late in the year).

North Macedonian full-back Leonard Zuta (5.4M) has started every game since he signed for Vålerenga. He offers the same clean sheet potential as Haug, but with the added bonus of possible attacking points. Although he has just one goal so far for his new club, the underlying numbers suggest that there may be more to come from him before the end of the season.

In a repeat of an all-too-familiar story, Lars-Christopher Vilsvik (4.7M) was unlucky not to come away with more points last gameweek. None of the chances he created were converted, and then Strømsgodset lost their clean sheet in the game’s final minutes. With a home match against Mjøndalen ahead, could this be the week that Vilsvik finally delivers on his huge potential and emerges with a haul?

With Bjørkan still affected by a knee injury, Alfons Sampsted (5.8M) remains our Bodø/Glimt defender of choice. Glimt will be targeting two wins from their remaining two home games as they seek to wrap up the title, and we’re backing them to take all three points against Lillestrøm this gameweek.

Jonathan Lindseth (now 6.8M) keeps his place in our selection ahead of Sarpsborg’s game with Odd. Lindseth now has 49 fantasy points from his last four games (even with a blank included in that run) and has scored in five of his previous six games. Odd, meanwhile, have kept just a single clean sheet since GW9.

As Viking laboured to a 1-0 win over Mjøndalen last gameweek, Zlatko Tripic (9.7M) came away with a single bonus point and no attacking returns. The bonus point was recognition of how instrumental he is in each of his side’s attacks, and the underlying numbers suggest a haul is on the way soon.  No other player in the league has created more big chances over the last couple of gameweeks.

A minor injury crisis at leaders Bodø/Glimt has finally handed Hugo Vetlesen (7.1M) a chance to stake his claim for a regular first-team place. He’s responded in style, with four goals in his last 162 minutes on the pitch. After scoring twice off the bench to rescue a point against Haugesund, he’ll be expecting to get a chance from the start this time around.

Strømsgodset destroyed title-chasing Molde 6-0 in their last home game, so Mjøndalen will be approaching their trip to Marienlyst with some trepidation… Johan Hove (7.9M) is the man pulling the strings in midfield, and he’s scored in both of Strømsgodset’s last two games.

For the first (and almost certainly last) time this season, we’re going for a Vålerenga triple-up in our selection. Osame Sahraoui (8.0M) takes the midfield slot. Still only 20, he’s regarded as one of the most promising young players in the league, and he’s showing signs of a breakthrough. His last three home games have provided a total of 30 fantasy points: even when he finished without attacking points against Brann, he was awarded all three bonus points.

Viking’s talismanic Veton Berisha (11.2M) is flagged as injured at the moment, but the latest reports suggest he’s back in training and likely to start against Haugesund. With Viking playing on Saturday evening, any managers wondering whether or not to captain him have the luxury of waiting for the teamsheets before making a final call. We don’t have the same luxury in this preview, but we’re happy to take the risk of putting Berisha in our starting eleven.

Ohi Omoijuanfo (12.4M) is still Eliteserien’s top scorer, but he’s gone off the boil lately. Three consecutive blanks led to a fairly significant decrease in his fantasy ownership, and Rosenborg will be tough opponents this gameweek. Still, we have a feeling that Ohi might turn it on in the penultimate game in front of his own fans. We’re ready to back him with the captain’s armband one last time… 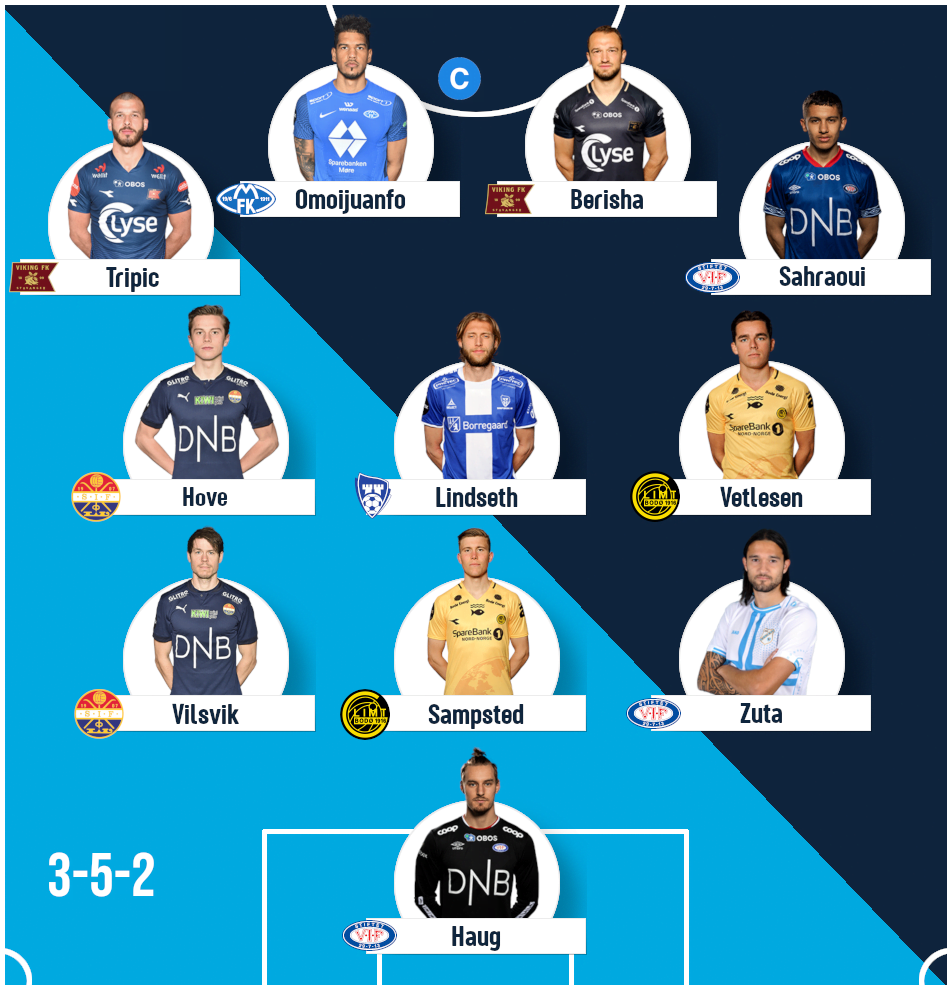