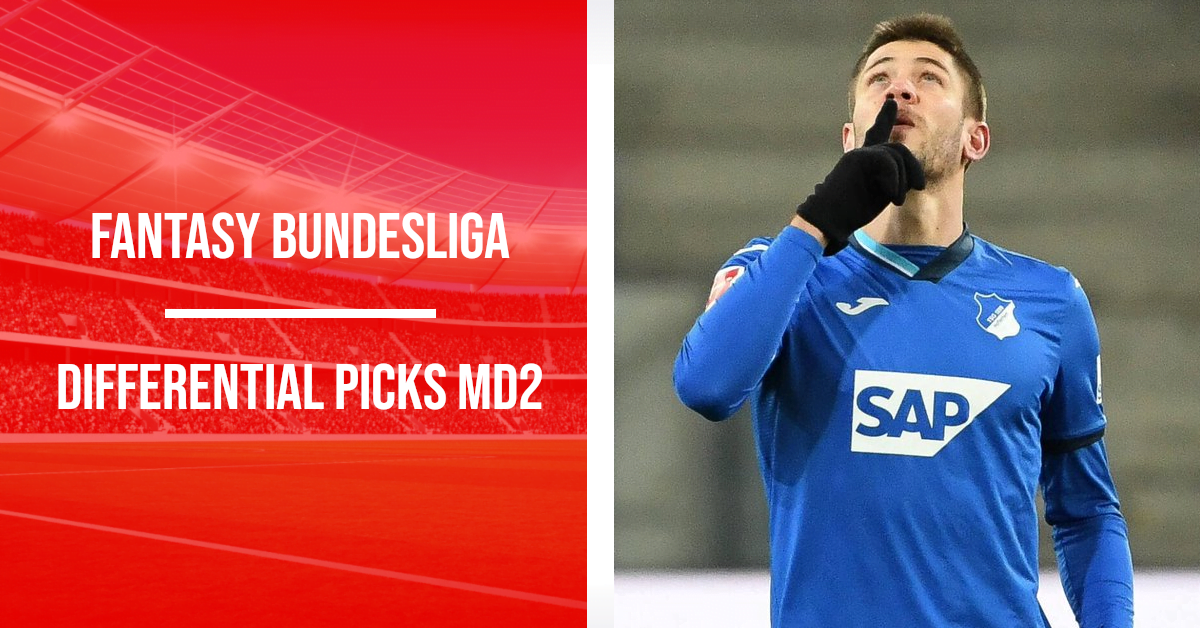 After a high scoring Matchday 1 of Fantasy Bundesliga, in this week’s article, we look at the differential picks that you should consider for your squad in Matchday 2 which can help you gain ranks on the leaders.

The main man for Hoffenheim with an ownership of 4% in the game is one forward worth considering a very sharp performance in MD1 with 3 assists and was involved in all of Hoffenheim’s attacking play.

So the stats also indicate very good returns for the player and considering standalone fixtures against Union Berlin this matchday and Dortmund on matchday 3 he is a player who can take your team up fantasy ranks.

This Bayern Winger is an interesting option to consider ahead of their fixture with Koln at home with him linking up with Lewandowski will be a good threat against the weak defence of FC Köln. Though he did not have any goals or assists in the first game the team was taking up positions centrally and shooting finishing the week on 21 shots which was second only to Stuttgart’s 32 shots against Greuther Fürth.

The stats highlight Gnabry’s potential and a double up with Lewandowski could gain you an advantage over many Fantasy Managers playing the game.

Jonathan Burkardt vs Bochum (A)

The young Mainz striker has been very much involved in pre-season as a centrepiece in their plans playing off the main striker – Adam Szalai. He has already scored two goals in the DFB Pokal and had a great game against Leipzig holding the ball and creating chances.

Though his stats are very limited due to less number of starts with an ownership of 1% in the game and with upcoming fixtures against Bochum and Greuther Fürth make him a very promising choice to deliver a good return in fantasy.

Jean-Paul Boëtius vs Bochum (A)

The Mainz midfielder was one of their best creative players last season with two goals and four assists and was linking up with the strikers from midfield.

He missed the first match due to quarantine and might possibly miss the second as well, but upcoming matches against promoted sides Bochum and Greuther Fürth make him a good fantasy asset if he does start. In case he doesn’t, midfielders Lee Jae-sung (OOP striker, 6M) and Paul Nebel (OOP winger, 1.1M) are also worth considering.

Masaya Okugawa vs Greuther Fürth (A)

The Japanese midfielder from Arminia was one of the brightest players in their dull 0-0 draw on matchday 1. He had two shots on target and was the main attacking threat for his side.

His stats do not reflect his potential as he only joined the club in the latter part of the season and played second fiddle to Doan. But this season he is in the starting 11 and with an upcoming fixture against Greuther Fürth makes him an interesting fantasy asset and Okugawa is selected by only 1% of managers.

Daichi Kamada vs FC Augsburg (A)

The Frankfurt attacking midfielder had a disappointing outing against Dortmund in the defeat as most Frankfurt players were hardly able to make an impact. He was in good form at home matches last season and his stats for the 2020-2021 season are below.

He was involved in teams attacking play and along with Kostic created the most chances. With ownership of just 4% and a favourable home fixture against Augsburg, he can reward the fantasy managers who own him.

Moussa Niakhaté vs Bochum (A)

The Mainz centre-back was the hero in their amazing win against Leipzig scoring the winning goal and putting on an impressive defensive display and keeping André Silva in his pocket.

He is a constant threat from free-kicks, corners and even taking the occasional penalty kick and with favourable fixtures against Bochum and Greuther Fürth he looks a solid pick with an attacking threat and at ownership of only 4%, he could be the best pick from the 05ers defence.

Stefan Lainer vs Leverkusen (A)

The attacking Austrian right-back had a decent performance against Bayern Munich and manage to set up chances for the forwards. He plays in a good Gladbach team who are known to attack via the wing and can deliver an attacking return in addition to keeping a clean sheet.

With ownership of 4% and a stand-alone fixture at Leverkusen who only accumulated an xG of 0.79 last week, Lainer can offer both points as well as star flexibility to your Fantasy Bundesliga team.

The Brazilian left-back for Bochum caught the eye in their match against Wolfsburg consistently making runs down the wing and crossing balls into the box, although they were playing with just 10 men.

In the game against Wolfsburg, he won 14 duels and took advanced positions on the left and along with a defensive-minded setup, he could be a shrewd pick.

Cedric Brunner vs Greuther Fürth (A)

The right-back for Arminia can be a source of good points against a shot-shy Furth team, who were poor in the first match against Stuttgart conceding five goals and 32 shots in total.

In the game against Freiburg, Arminia looked like a solid defensive unit and Brunner put in two crosses into the box. With very low ownership and a favourable fixture, he can be a decent budget pick. 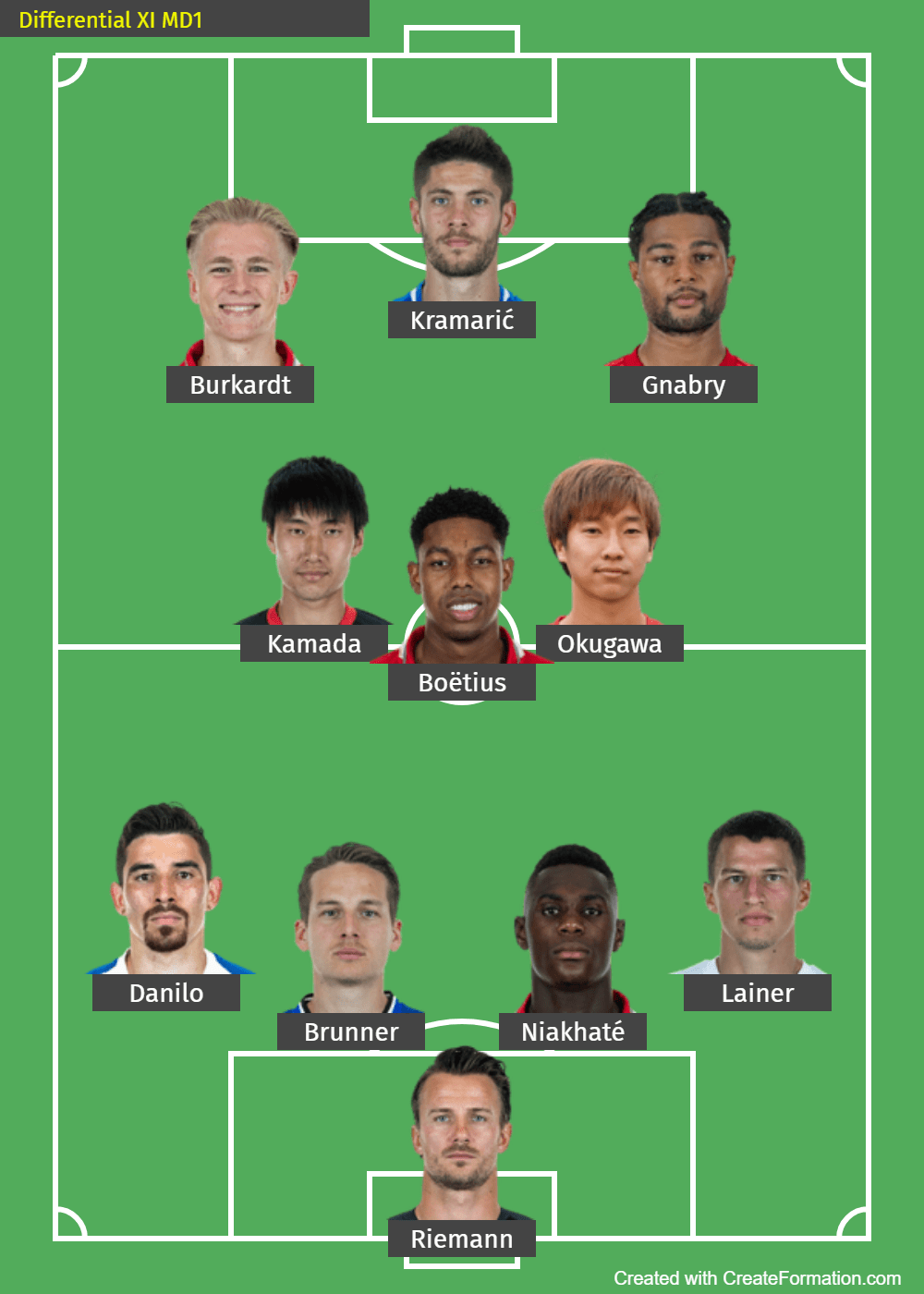