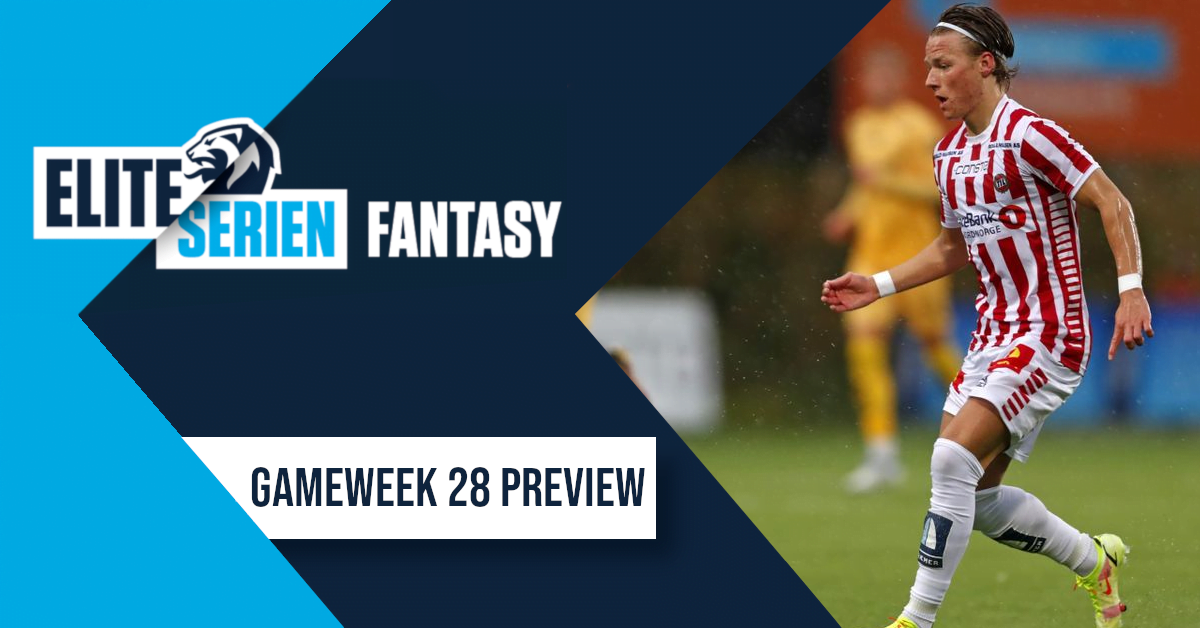 Tromsø IL’s young talent August Mikkelsen keeps growing better and better as the years go by and has already matched his tally of goal involvements last year with still a few games to go. With a game against bottom-of-the-table Jerv, Tipster Jacob Silkstone is trusting him with the armband in his Eliteserien Fantasy preview for gameweek 28.

98 of the top 100 teams in Eliteserien Fantasy captained the same player last gameweek, as did close to 90% of the top 1000 overall. Amahl Pellegrino also took the armband for our Tipsters selection, and Bodø/Glimt duly thumped Kristiansund 5-0. The league’s top scorer started, as expected, and was only subbed once the win had been wrapped up. Unfortunately, though, he was involved in precisely zero of his side’s five goals, squandering a string of golden opportunities and coming away with just a clean sheet point. Anyone daring to back a differential was heavily rewarded; seasoned Eliteserien Fantasy players were offered yet another sobering reminder that Norway is the spiritual home of the troll.

Despite our captaincy frustrations, the Tipsters selection had another solid week. Hugo Vetlesen did manage to make a meaningful contribution to that 5-0 win, scoring twice, while Thomas Lehne Olsen scored and picked up maximum bonus points as Lillestrøm won away at Haugesund. Clean sheets for Vetle Winger Dragsnes and Alfons Sampsted boosted our total to a very respectable 60 points, with the gameweek average down at 45.

With just three gameweeks remaining and the title battle already over, now is the time to look at some possible differentials for the final run-in.

Having been dropped midway through the season, Jacob Storevik (4.8M) has now regained his place between the posts for a Sandefjord side desperately battling to avoid landing in the relegation spots. With six consecutive defeats on the road, it’s clear that their home form will be crucial if they are to stay up. This week, they face a HamKam side that have failed to score in any of their last three away games. Storevik has eight saves across his last two home matches, so he should be good for at least a save point here.

We promised differentials, but we’re starting our defence with the most selected player (in any position) in the entire game: Vetle Winger Dragsnes (6.2M). It’s worth noting that Dragsnes was pushed into the left centre-back role last week, but even as part of a back five he has plenty of touches in the opposition half. With Lillestrøm still fighting for a medal place, we’re backing them to get past Odd in what could be a tighter game than expected. A thrashing at the hands (or feet?) of Bodø/Glimt aside, Lillestrøm haven’t conceded more than once in a home game all season.

Warren Kamanzi (5.1M) is on a run of four consecutive blanks, but his attacking potential makes him our top pick from the Tromsø defence ahead of a home game with Jerv. Despite not securing a regular starting role until Gameweek 20, Kamanzi has three goals and two assists this season, ranking equal first among Tromsø defenders for total fantasy points.

With neither Linnes nor Haugen in the squad for the Thursday night European game, you’d expect Mathias Løvik (just 4.9M) to be a secure starter at wing-back for Molde for at least one more gameweek. Løvik has attacking returns in two of his last four starts, and represents incredible value as long as he keeps getting the minutes.

A goal and an assist against Rosenborg continued a hot streak for Ola Brynhildsen (10.4M) since returning from injury, and he was also on target in the midweek European game. There’s some risk of reduced minutes against Viking, but one of the most in-form players in the league against one of the shakiest defences seems like a pick that’s too good to ignore.

Johan Hove (8.5M) has now equaled his best-ever Eliteserien season in terms of attacking returns, with 11 goals and two assists. Unsurprisingly, he is underperforming his expected assist stats, and another haul should be well within his reach against Haugesund on Saturday. Haugesund’s form has been unpredictable of late, with a narrow win against Kristiansund preceded by a 4-0 thumping away at Sarpsborg.

Osame Sahraoui (8.4M) remains head and shoulders above the rest of the league for expected assists, although his last attacking return came way back in Gameweek 21. Three of his four double-digit hauls this season have come at home, and a defensively suspect Sarpsborg side look like a favourable match-up for Vålerenga this week.

August Mikkelsen (7.9M) is our second Tromsø pick this week. His form has picked up in the second half of the season: having registered just two assists before Gameweek 16, he now has a total of eleven attacking returns and outranks all of his teammates except Eric Kitolano (an injury doubt at the time of writing) for expected goals per 90 minutes.

Bendik Bye (6.5M), somewhat surprisingly, ranks third in the league for expected goals this season, behind only Pellegrino and Fofana. Kristiansund face a must-win game at home to Aalesund, and we’re backing them to keep their survival hopes alive for at least one more week. Kristiansund have won three of their last five at home, whereas Aalesund have just two away wins all season.

Casper Tengstedt (10.3M) retains his place in our selection despite a tricky fixture against Bodø/Glimt. The defending champions suffered a demoralising late defeat against Zurich on Thursday, and Rosenborg’s home form is notably strong. The Trondheim side have won every match in front of their own fans since Tengstedt signed, and Tengstedt is yet to blank at home. We’re happy to pick him over any of the Bodø/Glimt attackers this week.

Faris Moumbagna (6.4M) is currently owned by just 1.5% of teams, but has a vital role to play as Kristiansund’s hopes of survival hang by the thinnest of threads. Before a minor injury in Gameweek 24, Faris was on a run of five goals in four games. An encounter with Jerv offers a golden opportunity to rediscover that form. We’re backing Kristiansund to win this weekend’s relegation six-pointer, and Faris looks like the best budget striker in the game right now.

Team of the Week Gameweek 28 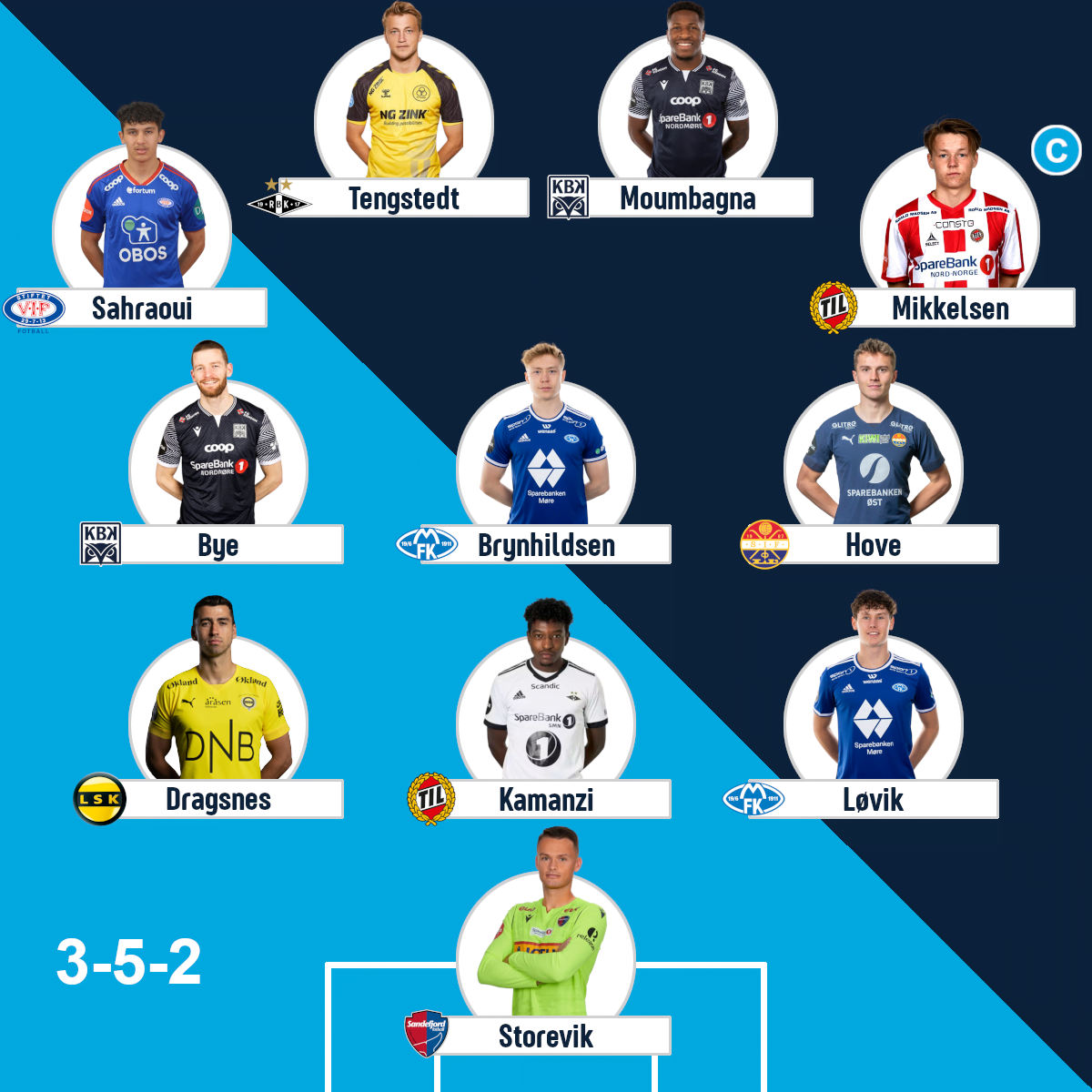