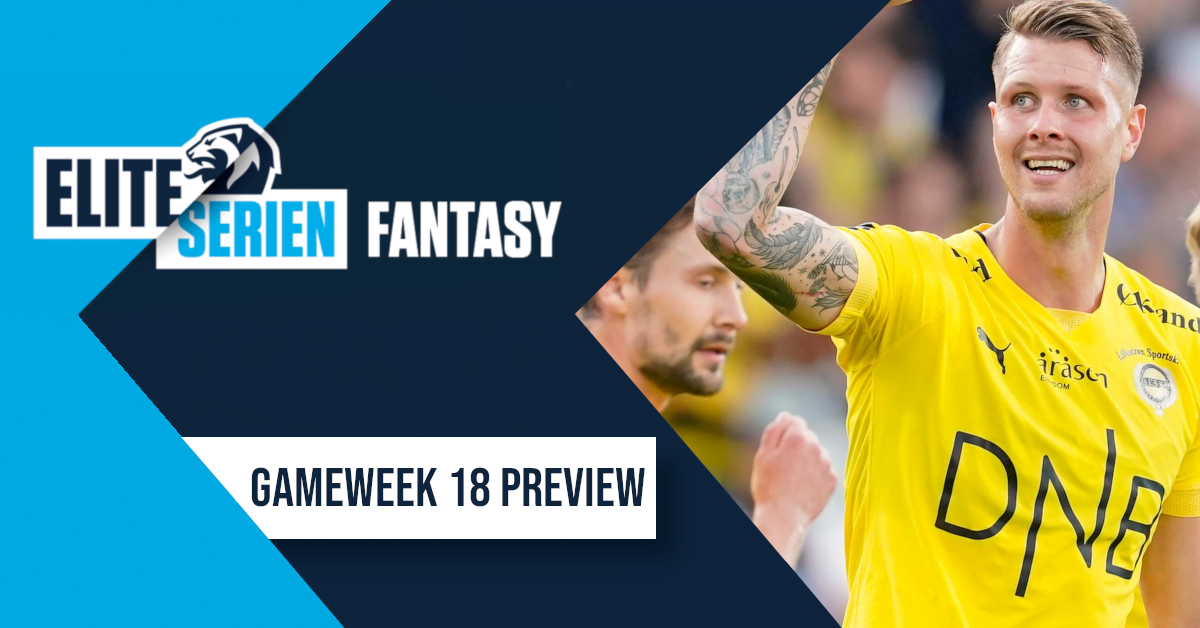 With a massive Champions League qualification match for FK Bodø/Glimt in the upcoming week, the player picks in Eliteserien Fantasy don’t seem so straightforward. Still, Tipster Jacob Silkstone is backing his differentials to come up big in gameweek 18, especially Hólmbert Friðjónsson, who is being trusted with the captain’s armband.

After an uneven start to the season, it looks like we’re back to status quo: Bodø/Glimt are dominating the league, looking a level ahead of everybody else, and able to put a hatful of goals past virtually anyone. The 7-0 win over Odd last week brought some real ‘rough with the smooth’ fantasy stories, as popular picks Lars-Jørgen Salvesen and Joel Mvuka (both in our recommended Team of the Week) blanked while Amahl Pellegrino (our recommended captain) and Hugo Vetlesen recorded a staggering 42 points between them. In defence, Brice Wembangomo was hauled off at half-time for the second time in the last three weeks.

Aside from the Pellegrino haul, our picks had a slightly disappointing week. Ole Christian Sæter cemented his status as the best budget forward in the game with another goal, but our three defenders contributed just four points between them. Overall, our score of 61 was enough to beat the gameweek average (55) but far from being one of our more memorable performances of the season.

Gameweek 18 might be another tricky one to navigate. Bodø/Glimt will be looking ahead to the Champions League play-off round and managing the minutes of their key assets, while current league leaders Molde are one of four clubs with a blank gameweek. Odd, Viking, and Strømsgodset are also without a fixture, so a number of Eliteserien managers might be considering whether to play a chip or take a hit. Whatever your strategy, here are eleven players on our watchlist right now, with the usual mix of ‘essentials’ and differentials..

After last week, we can temporarily pretend that we’re focusing on Lillestrøm’s Mads Hedenstad Christiansen (5.7M) for his attacking threat. Christiansen’s last-gasp equaliser against Tromsø made him the first Eliteserien keeper to score a goal since Håkon Opdal in 2015, and we’re confident in predicting that he’ll be the top scorer among Eliteserien keepers this season. In the reasonably likely event that he never gets another attacking return for the rest of his career, he’s still a great pick this week as a rock-solid Lillestrøm backline come up against Jerv, still the league’s lowest scorers.

While defensive double-ups are always risky, Tom Pettersson (5.2M) carries plenty of genuine attacking threat and offers an underpriced route into one of the league’s strongest defences. We’re willing to give him another chance in our team after a blank last time out.

Double gameweek hero Lasse Nilsen (5.5M) returns from a one-match suspension to face Kristiansund in GW18. Perhaps surprisingly, Tromsø have the second best defence in the league in terms of expected goals conceded, only narrowly behind Bodø/Glimt. Nilsen ranks higher for expected assists than any of his defensive teammates, and delivered 16 fantasy points in his last two starts.

Isak Helstad Amundsen (4.3M) has been going under the radar as a budget option at Bodø/Glimt, starting each of the last four games. As mentioned above, he’s part of statistically the strongest defence in the league; whisper it quietly, but he also has a relatively impressive goalscoring record at the youth level.

Rosenborg’s Carlo Holse (9.5M) has been in coruscating form recently, with a goal, six assists, and an incredible 14 bonus points across his last seven matches. The Trondheim team are pushing for a place in the top three this year, and Holse is crucial to their hopes. He ranks higher than any other Rosenborg player for expected assists.

It would take a fool to bet against Amahl Pellegrino right now, but we’re doing exactly that. With concerns over Pellegrino’s playing time (although an early substitution last week did nothing to prevent a haul), we’re keeping the faith in teammate Joel Mvuka (6.7M). Mvuka passes the ‘eye test’ every week, although he remains a frustratingly inconsistent finisher. Looking at the stats alone, he should have come close to matching Pellegrino and Vetlesen last week.

Eric Kitolano (7.3M) has emerged as the star man for Tromsø recently, returning maximum bonus points again as they came desperately close to shocking Lillestrøm last time out. In a purple patch and about to face the side at the bottom of the table, he looks like an obvious pick.

Vålerenga have overcome a horrific start to the season and are currently playing some of the best football in the league. With Osame Sahraoui an injury doubt, we turn to Amor Layouni (8.5M) as our midfield selection for the game against HamKam. Layouni has three goals from his last five games, but remains in only 5% of fantasy teams for the moment.

Icelandic international Holmbert Fridjonsson (8.9M) continues to lead the line for Lillestrøm in the absence of Akor Adams. Opponents Jerv have (by far) the highest expected goals conceded total in the league, and we expect Fridjonsson to capitalise on the chances that are almost certain to come his way.

Added to the game only just before the last deadline, Danish striker Casper Tengstedt (9.5M) made a hugely impressive debut for Rosenborg, scoring the opening goal as they beat an obdurate HamKam side 2-1. Expectations will be high for the rest of the season…

Henrik Udahl (8.4M) ranks fourth among active players for expected goal contributions per 90 minutes,  but he’s started only a handful of games all season. It’s surely no coincidence that Vålerenga’s upturn in form has coincided with his reintroduction to the starting eleven. 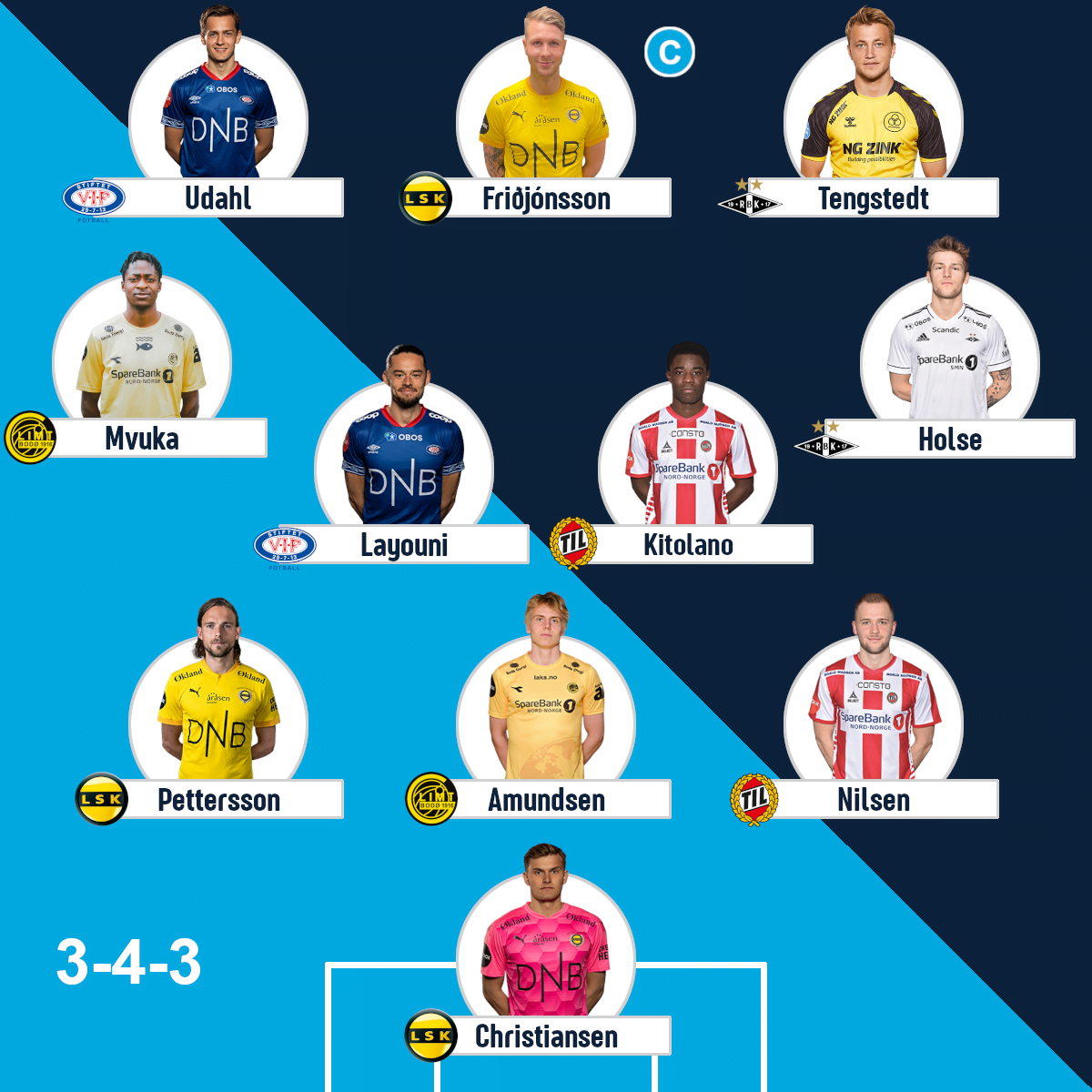