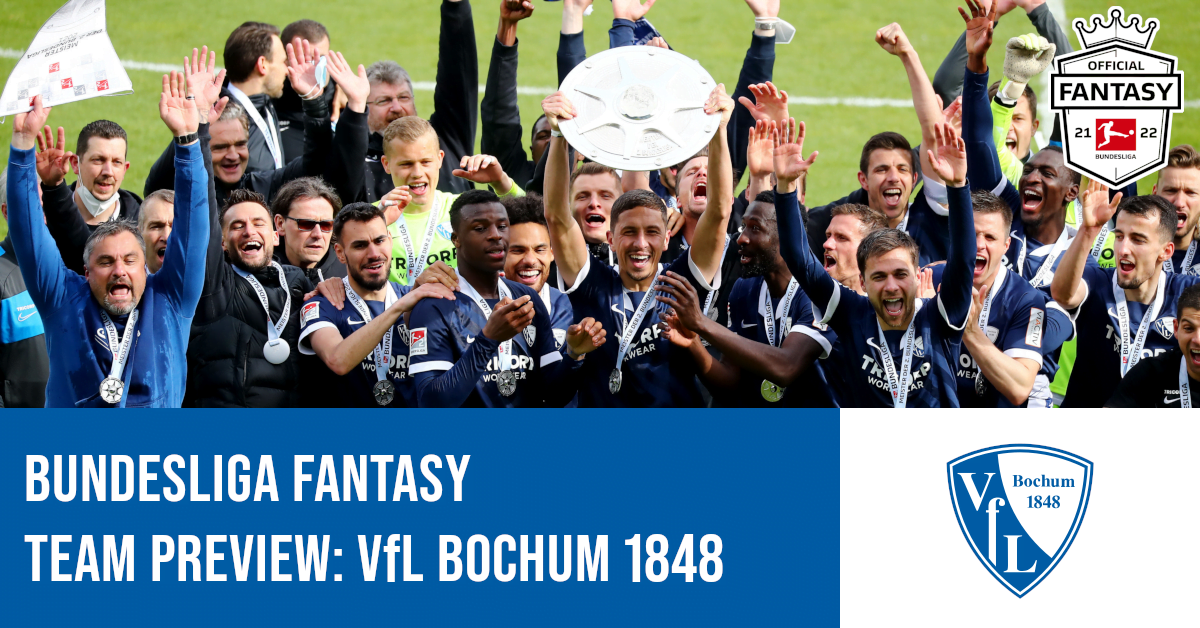 Bundesliga Fantasy is now just 12 days away and for our first article in the team preview series, we take a look at 2. Bundesliga champions VfL Bochum who are making their first appearance in the top tier of German football since the 09/10 season.

Bochum were nicknamed “Die Unabsteigbaren” or “The Unrelegatables” in the ’80s as they survived relegation from the top tier year after year. Bochum were promoted to the Bundesliga back in 1971 and they lived up to their nickname for 20 years. Since then they have been up and down the first and second division in a proper yo-yo fashion with their last stint in the Bundesliga coming 11 years ago when they finished 17th in the table and were relegated along with Hertha Berlin.

Fun Fact: The name of the club is “VfL Bochum 1848” and it is one of the oldest sports organizations in the world but the club was initially founded as a gymnastics club in that year and did not become a football club until 1938.

The 2. Bundesliga is one of the most unpredictable leagues globally, and the path to promotion certainly wasn’t easy for the club. VfL Bochum were locked in a relegation battle before the pandemic arrived and were sitting at 15th on the table before ending the season in proper 2. Bundesliga fashion by going on an unbeaten run to finish eight and secure their status as a second division club as another year.

Momentum was on their side heading into the 20/21 season and some strong signings in the oncoming window such as Gerrit Holtmann from FSV Mainz and Herbert Bochhorn from Huddersfield Town solidified their prospects as dark horses for the title. However, their season did not begin on a good note as they had a sluggish start with just one win in three games but went on to win nine games and lose just three till mid-season.

They were in second place and just three points behind leaders Hamburg SV at that juncture but they turned their performances up a notch in the Rückrunde just like they did in the previous season and won 10 out of their next 15 games without a single draw. Former Bochum player turned head coach Thomas Reis’s men secured a spot in the playoffs with a 1-1 draw on Matchday 33 at Nuremberg before putting the final touches to their coronation ceremony on the final day with a 3-1 win over SV Sandhausen. It was their first 2. Bundesliga title victory since 2005-06.

Bochum had the best home record in the league last season winning 12 of their 17 games at the Ruhrstadion and losing just thrice. They also scored the most goals at home with 40 and conceded the least goals at home as well with 16.

Bochum had a stellar attacking record to boast about last season but their defence was just as impressive. The team conceded the second-fewest goals in the league with 39 after Holstein Kiel’s 35 goals conceded.

Keeper Manuel Riemann kept the most clean sheets among shot-stoppers in the division with 11 and defender Danilo Soares was also a key member of the white-blues defence and also contributed offensively with two goals and two assists – most goal involvements among defenders for the team.

German centre-back pairing Maxim Leitsch (22) and the highly-rated Armel Bella-Kotchap (19) were also vital cogs of the defence and are set to share defensive responsibilities again for another season.

Full-backs Danilo Soares (6M) and Cristian Gamboa (4M) are the best defenders from the team in Bundesliga Fantasy even though they can’t be relied on for goal involvements and attacking bonus.

The season hasn’t even begun but the team has already received a major setback. Robert Žulj who was arguably Bochum’s best player and spearheaded their charge to the Bundesliga with 28 G+A last season has left the club for a meagre sum of €350K due to a clause in his contract to join UAE Pro League club Ittihad Kalba this transfer window. His quality is almost impossible to replace immediately without splurging a large sum and Bochum have done just the opposite by signing Takuma Asano as a free agent. Asano has just one goal in the 28 Bundesliga games in his career so he has some big boots to fill in with his new club.

Players with the most returns for VfL Bochum in pre-season

VfL Bochum Players to Watch Out for in Bundesliga Fantasy

Riemann was the main reason for Bochum’s impressive defensive record and he led the league in clean sheets (11) as well as the percentage of shots saved with 74.8%. He is currently the cheapest keeper expected to start along with Greuther Fürth’s Sascha Burchert at 5M and Riemann stands out as the best of the two as he is more involved in saves – something that is even more valuable than clean sheets in the game. It is worth mentioning that new keeper Micheal Esser (3M) is also one to keep an eye out for as he is widely regarded as the greatest keeper ever in Bundesliga Fantasy because of his heroics with Hannover in the 18/19 season where he was a good bet for 6+ points in almost every game.

Winger Holtmann’s involvement in the attack was comparable to talisman Žulj and he averaged the most shots per game (SpG) for the team with 2.3 to go along with 1 key pass per game (KeyP) last season. In the absence of Bochum’s most important player in attack, he is expected to shoulder more responsibility offensively and will also command over free-kicks and set-pieces for the team. Holtmann could be a potential steal for 5M but does not have the best fixtures to start the season with games against Wolfsburg and Mainz and FC Köln.

Zoller was the top goal-scorer for Bochum in the second division along with Žulj scoring 15 goals in total at an average of 0.51 goals scored per 90 minutes. The Ex-FC Köln striker enjoyed his best season in front of goal and has plenty of experience in the top division having represented the “Billy Goats” for 76 games in the top flight scoring 11 times and assisting 4 goals. His value at 7M might be questionable with options such as Borré, Awoniyi and Hrgota in the same price range but his lethality in front of goal isn’t and Zoller’s experience in the Bundesliga is going to certainly come in handy for the white-blues.

The loss of Žulj is going to have a big effect on the team unless he is replaced but Bochum’s recent transfer activity suggests that the club does not want to spend and someone from the current squad will have to step up to lead the team. Bochum are already one of the favourites to be relegated and it will take a massive effort to save the club from heading downwards.

That being said, “Die Unabsteigbaren” are capable of surprising everyone when it is least expected from them so any possibility shouldn’t be ruled out unless we see what this squad of experienced players and young gems can do.

It is tough to pick a player from the attack but Holtmann might be a good source of bonus points as he is expected to be the main source of creativity. Keeper Riemann stands out as Bochum are known for conceding plenty of shots and Riemann has made a name for himself by being the best at saving them.

Bundesliga Fantasy Managers can wait and watch how this newly promoted team performs as we have a wildcard after matchday three and the fixtures ease for the white-blues after that. If you look at it outside the fantasy lens, another exciting attacking-minded club has joined the Bundesliga replacing fellow Ruhr club FC Schalke 04 in the process. The derby against Borussia Dortmund is certainly going to be one to watch this season. 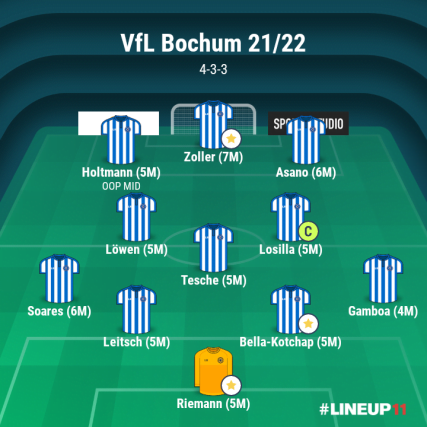