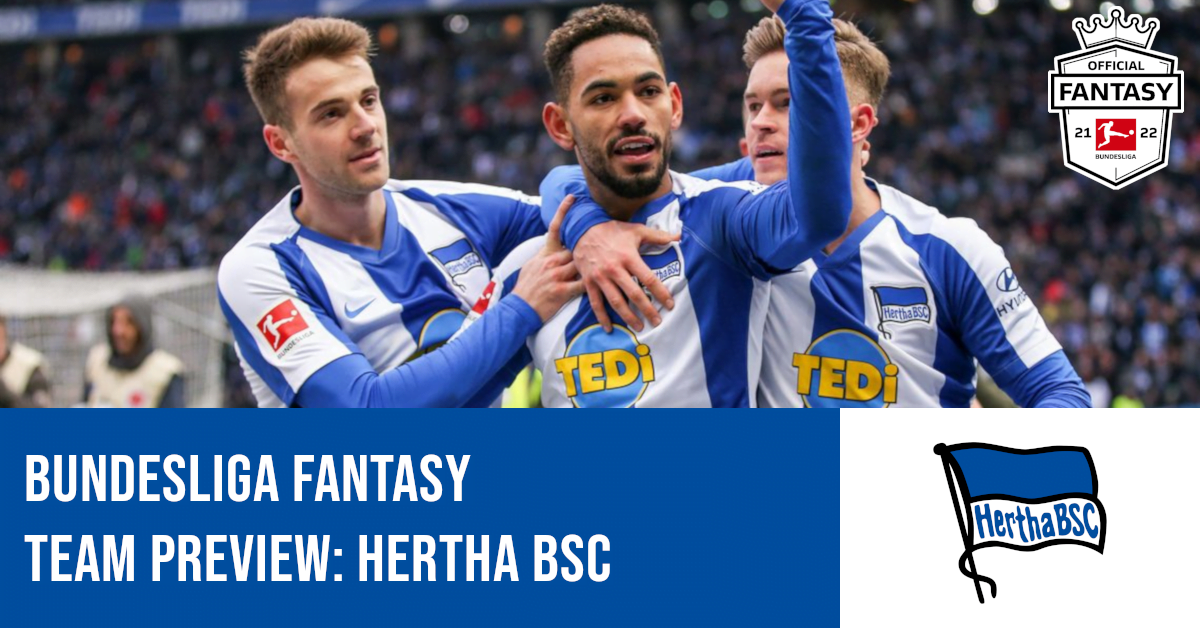 Our Bundesliga Fantasy team preview series continues with an in-depth preview of Hertha Berlin who finished 14th in the league last season.

Hertha BSC is one of the oldest clubs in Berlin and is one of the founding members of the German Football Association and won their first German championship in 1930. The club was founded back in 1892 as BFC Hertha 92 and their name and blue-white colours came from a steamship taken by one of the new club’s founding members. Hertha is often referred to as its nickname of “Die Alte Dame” which means “The Old Lady” in reference to the eponymous steamship.

The club managed to recover from both world wars and by the ’50s was one of the most dominant teams in the Berlin Oberliga. Hertha’s title win in the 62/63 season meant that they were Berlin’s representatives in the first season of the newly formed Bundesliga and that year also saw the club move to its new home at the Olympiastadion. The Old Lady’s joy was short-lived however as their involvement in a bribery scandal that shook the Bundesliga two years later led to their relegation. Since their introduction to the Bundesliga, the club has been through turbulent periods with constant spells between the first and third divisions. Hertha’s last promotion was back in 2013 when they won the 2. Bundesliga on the back of promotion hero Ronny’s 18 goals and 15 assists and they have been a top-flight club since then.

Fun Fact: Hertha’s home ground the Olympiastadion was originally a multi-purpose stadium built for the 1936 Olympic Games in Berlin.

For most of the season, the Berliners were safe from the relegation zone as the club kept wavering from the 10th-15th position on the table but a four-game winless streak from Matchday 15-18 that included losses against relegation contenders Arminia Bielefeld, Werder Bremen, mid-table side Hoffenheim and a draw against FC Köln meant that head coach Bruno Labbadia was sacked immediately with Pál Dárdai announced as his replacement.

Pál Dárdai is a former Hertha captain, holds the record for the most appearances for the team in the Bundesliga with 372 caps for the white-blues and is the third longest-serving coach in the club’s history. The club never found stability under his first stint and the Berliners were mostly in the bottom eight teams with 7th being their best finish under Dárdai in the 15/16 season. He left the job at the end of the 18/19 season and took up a role with the academy but failed stints from his successors Ante Covic, Jürgen Klinsmann, Alexander Nouri and Bruno Labbadia meant that the club approached their loyal companion to take over the reins at the Olympiastadion for the second time.

His first mission back in charge? to guide the club to safety. Dárdai did not have the welcome he would’ve wished for on his return as the club as the team started out with a five-game losing streak under him. The 2-0 loss to Borussia Dortmund on Matchday 24, in particular, was a wake-up call for the team as they had slipped into 16th place after winning just five points from their last 11 games while losing eight of the matches in that period.

What happened next was unforeseen as the white-blues had a complete turnaround, going on an unbeaten streak until the final matchday of the season when they were beaten 2-1 by Hoffenheim. The club’s end of season surge included impressive results such as the 3-0 win against Bayer Leverkusen, SC Freiburg and a comeback 2-2 draw against Borussia Mönchengladbach. The reintroduction of Dárdai as manager worked successfully as Hertha finished the season in 14th place. Albeit it wasn’t in the most convincing manner as they were just two points ahead of 16th placed FC Köln but nonetheless, another season of Bundesliga football was secured for the club.

Hertha BSC had the least wins away from home last season (3, tied with Hoffenheim and Arminia) after Schalke (0).

The club has spent an incredible amount on the team especially in an attempt to strengthen the attack but the new high-profile signings have failed to fire so far. With the exception of Matheus Cunha (7 goals, 4 assists) and Dodi Lukébakio (5 goals, 5 assists), the other attackers were inconsistent and failed to have much of an impact on the team. Vladimír Darida (1 goal, 6 assists) was the primary playmaker for the team and was responsible for most of the set-piece routines.

The team become infamous because of their inability to finish the numerous chances they get in every game and it has mostly been Cunha (2.6 SpG) who has failed to convert his chances and score. Hertha also has other big names in attack such as Jhon Córdoba (13 goals, 2 assists for FC Köln in 19/20) and Krzysztof Piątek (13 goals in 19 games for Genoa in 18/19) so the expectation from the team has always been to be much more prolific in front of goal.

The Hertha defence was far from the worst in the league and was only seventh for goals conceded but there are still some questions that have been left unanswered:

The heavy rotation has mostly kept Bundesliga Fantasy managers off Hertha defenders as no player is guaranteed to start every game. When he did start, however, Maximilian Mittelstädt was a standout option from the old lady as he was involved in set-pieces and even played as a winger at times. Right-back Peter Pekarik and keeper Rune Jarstein who deputized for out of form Schwolow – were also worthy players on a sub 5M budget last season.

The battle for who will be the first-choice left-back is so competitive that it has forced one of the most talented left-backs in the league – Luca Netz – to join Borussia. Whoever starts on the day between Mittelstädt and Plattenhardt will be the best defender from the team as he will be on set-pieces as well.

It might come as a surprise that Hertha are one of the biggest spenders in the league considering the relatively low success the club has seen in recent years. The club has Investor Lars Windhorst to thank for that. He has already injected close to €400 million into the club in an attempt to push the club to greater heights but Hertha haven’t found the same success as some of the other big spenders such as Manchester City and PSG.

Hertha spent more than any other European club during the 2020 winter window, bringing in players like Krzysztof Piątek from AC Milan and Matheus Cunha from RB Leipzig and despite the coronavirus pandemic restricting teams all over Europe, Hertha were able to sign a new starting striker Jhon Cordoba and a new goalkeeper Alexander Schwolow, while also bolstering the midfield with Matteo Guendouzi on loan from Arsenal.

All this just to underachieve while city rivals Union Berlin have made it to Europe on a fraction of what Hertha are spending. Looking at the club it is clear that throwing money at the problem won’t solve anything and the club needs consistency in its management and player selections if they want to get out of the mid-table spot and challenge for the top 10.

Hertha BSC Players to Watch Out for in Bundesliga Fantasy

Cunha has become a go-to option for Bundesliga Fantasy managers with his high floor as even though he might not score or assist very often, the number of shots that he takes in a game means that he is a good bet for 6+ points in almost every matchday. He will certainly be a popular pick once consecutive games against newly-promoted sides Greuther Fürth and VfL Bochum come around but might miss the start of the season due to the Olympics. Even though Cunha enjoyed better form under Labbadia than Dárdai, he is still the club’s talisman and might improve on his last season’s scores if he stays fit for an entire season.

Once one of the brightest strikers in the world, Stevan Jovetić has become somewhat of a journeyman over the last decade with spells in each of Europe’s top five leagues. He did not have the most prolific season last year with AS Monaco in the Ligue 1 with six goals as he was mostly being used as an option of the bench. Nonetheless, his recent performance in a 4-3 win against Liverpool in a friendly where he beat Virgil Van Djik and Andrew Robertson with incredible finesse and skill to put the ball past keeper Alisson has put the spotlight on him again. It is proof that he is still a class act and if he gets the same chances to score as Cunha does who is a much worse finisher then I am sure that he will be a fantastic option in Bundesliga Fantasy.

Mittelstädt is one of the more attacking full-backs in the league and on his day can generate enough points off bonus than some defenders do with a clean sheet but the only concern is that he is not nailed in the XI. A price tag of 7M is absolutely perfect but as long as Plattenhardt is there, his position in the starting XI will always be in doubt.

An OOP player on the wing for just 5M seems too good to be true but Dilrosun could get some game time before the first wildcard as long as Cunha is out. He is one player that could have a breakout season but is only expected to feature in limited games for the Berliners. Another honourable mention is incoming signing Marco Richter who was also popular for being a player that took lots of shots for Augsburg last season.

Hertha are certainly not relegation contenders with all the star power in the squad but the club should certainly be in the top 10 at the least with all the talent that they have. Pál Dárdai will look to steer the club into less turbulent waters in his second stint and hopefully challenge for Europe in the future just like Lars Windhorst envisioned.

As it stands, the best-attacking asset from the club will be the ever so consistent Matheus Cunha and Stevan Jovetić, Javairo Dilrosun and Marco Richter are some names that could pop up as wildcards as the fixtures ease for the team from Matchday 4 onwards.

Left-back Maximilian Mittelstädt would be a must-have if Marvin Plattenhardt didn’t compete with him but depending on how the first few matchdays go, one of them might be essential against the newly promoted teams.

Bundesliga Fantasy managers shouldn’t consider Hertha players as must-haves, to begin with as they face Wolfsburg and champions Bayern Munich within the first three matchdays but at least one player will be essential from the team after the first international break. This is Hertha’s best squad in a very long time and the expectations are very high but whether this translates to more points in fantasy is yet to be seen. 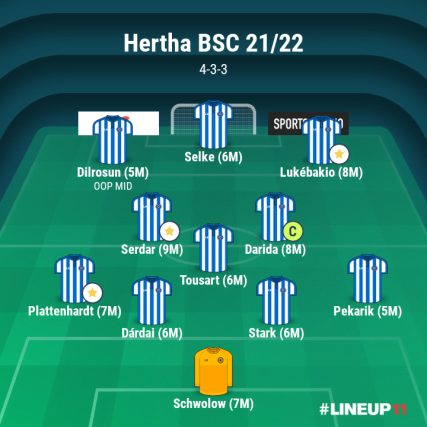