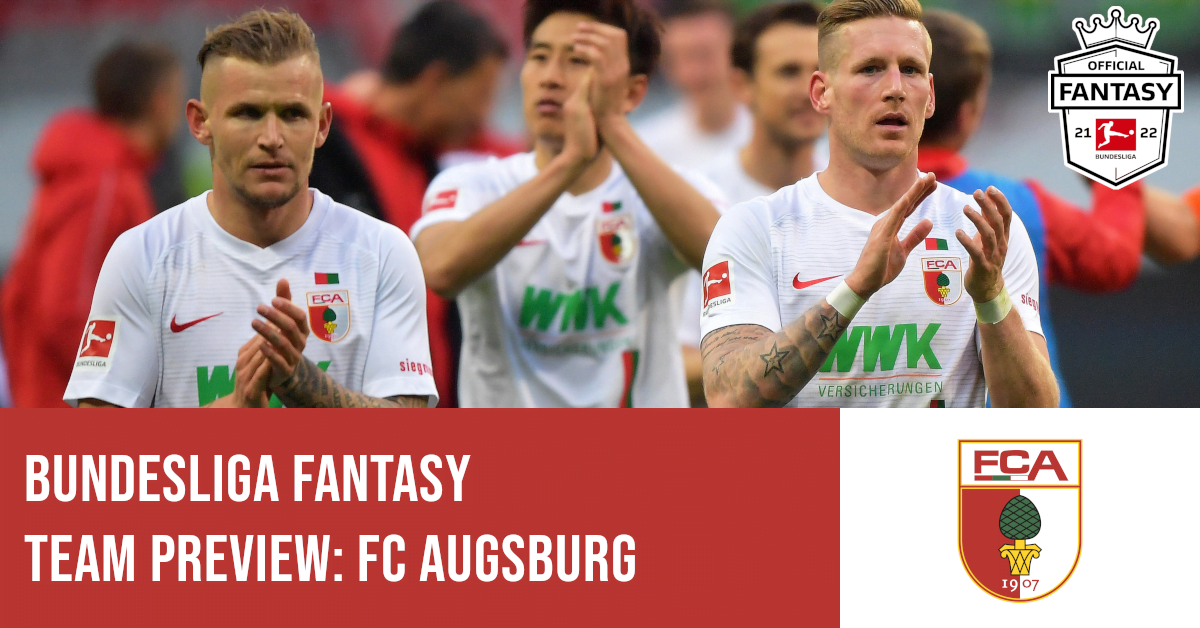 Our Bundesliga Fantasy team preview series continues with an in-depth preview of FC Augsburg who finished 13th in the league last season.

The club was initially founded on 8 August 1907 as FC Allemania and it was not until 1969 that its present name, Football Club Augsburg, came into existence after a merger with local side TSV 1847 Schwaben Augsburg. FC Augsburg spent most of the past 30 years in the lower leagues including the regional divisions and were struggling to stay afloat with the mounting debt until a group of investors decided to come on board to save the club in 2001. Their investment paid off, as the club was promoted to the 2. Bundesliga for the first time in 23 years in 2006 and to the Bundesliga for the first time just five years later in 2011. The Fuggerstädter – a nickname derived from the city’s famous Fugger family, founders of the Fuggererei – have managed to survive in the top flight in every single season since then.

FC Augsburg’s best season so far in the Bundesliga was in 2015/16 when head coach Markus Weinzierl – the club’s longest-serving coach in the Bundesliga – guided the team to the UEFA Europa League courtesy of a fifth-placed league finish. The joy of being a top-five team in the league was short-lived as Augsburg finished 13th next season and haven’t managed a top-finish again after that.

Fun Fact: The club is also popularly referred to as the other Bavarian team and Markus Weinzierl is the only coach to have beaten fierce local rivals Bayern Munich in the Bundesliga era with a 1-0 win back in April 2014.

The team had a dream start to the season, beating Union Berlin 1-3 in the season opener and Borussia Dortmund 2-0 in the next matchday but the club headed into a downward trajectory after that till the end of the season. FC Augsburg’s run from Matchday 15-26 when the team won just three games and lost nine was a warning sign for the club and despite being in a strong position to avoid relegation, the club sacked head coach Heiko Herrlich in April 2021.

The management was looking for a change as the recent finishes didn’t coincide with the club’s vision of going from a mid-table team to a top 10 one and the club could not have found anyone better for the job than someone who has done that before – Markus Weinzierl. He was in charge for only three matchdays but the team’s performances reflected his strong attacking mentality and vulnerabilities in defence. This was especially true in the final matchday of the season in the Bavarian derby against Bayern Munich that the team lost 4-2 after being 4-0 down at halftime.

In the end, FC Augsburg had to settle for a 13th place finish with a gap of just three points between the club and FC Köln in the relegation zone.

FC Augsburg had the most losses away from home (11) and were the worst away team in the league after Schalke (13 losses).

Although the club boasts of some of the brightest attacking talents in the league in Ruben Vargas (7 goals, 1 assist) and Marco Richter (3 goals, 1 assist), it was the veterans who were the most key members in attack for the Fuggerstädter. The team’s attack was far from the best and only Schalke created fewer big chances but the trio of André Hahn (8 goals, 3 assists), Daniel Caligiuri (6 goals, 4 assists) and Florian Niederlechner (5 goals, 4 assists) were responsible for over half of the team’s goals and pitched in when it mattered the most to secure wins for the team.

The team was always susceptible to conceding goals and no clean sheet was ever guaranteed but Augsburg was still only 11th for goals conceded and 9th for clean sheets despite having the worst xGA in the league after Schalke. Most of the credit for this goes to keeper Rafał Gikiewicz who single-handedly saved the club from a possible relegation even when the other players failed to deliver. He led the league in saves and his best performance came in the final game against Bayern Munich where he denied fellow Poland international Robert Lewandowski on multiple occasions before the striker finally got the better of him on the final kick of the campaign to break the record for most goals in a single season (41). It was incredible business from Augsburg to sign him on a free transfer as he has now become one of the star players at the club.

There have been no obvious picks from the Augsburg defence ever since Phillip Max left to join PSV but Iago has been the most popular option over the past couple of seasons. Right-backs Robert Gumny and Mads Pedersen are also worth a shout but are never guaranteed starts or minutes.

Investing in the Future

FC Augsburg’s transfers so far have been interesting, to say the least. The average age of their signings in this window is 20.3 years so clearly there has been an emphasis on signing young players – especially German youth internationals – in an ageing squad. The best signings so far have been German U-21 European Championship hero Niklas Dorsch from KAA Gent and the German U-21 captain Arne Maier on a swap deal for Marco Richter with Hertha Berlin.

Attackers might be the need of the hour but these signings add some much-needed reinforcement in front of the centre-backs – a key pain point for the club over the last few seasons. Dorsch-Maier is going to be one of the most exciting duos to watch in the Bundesliga this season and their presence should have an effect on defence – especially in terms of shots and goals conceded.

Players with attacking returns for Augsburg in pre-season

FC Augsburg Players to Watch Out for in Bundesliga Fantasy

Hahn was one of the best Out of Position (OOP) players in Bundesliga Fantasy last season at just 4M, playing almost half of his games (11) as a striker and scoring four goals. This season he might not start up top with Niederlechner back from the sidelines after returning from an injury but he will still be an OOP option on the right-wing where he was even more prolific, scoring once and assisting four goals in nine games on the right flank. He led the team in goals scored and now that the competition is even less considering Richter has been sold, Hahn should get more consistent minutes to improve his record from last season and is still a bargain buy at 8M.

Gikiewicz was mostly overlooked because of his 7M price tag last season and the fact that there were much cheaper options available such as Ortega and Müller but he was still one of the best keepers to own in Bundesliga Fantasy, finishing second for total points (200) among shot-stoppers after Ortega (234). Now that the budget keepers from last year have caught up in terms of price, he is one to seriously consider especially with games against trigger happy Hoffenheim, Eintracht Frank and Bayer Leverkusen to start the season. Expect him to top the charts for saves and points for fantasy keepers again this season.

More of a differential option rather than template, almost all of the playmaking responsibilities for the Fuggerstädter fall on Caligiuri, who is also on free kicks and corner kicks for the team. He might not be talked about a lot but he was one of the highest-scoring players last season with 225 points even out-scoring the likes of Marcel Sabitzer, Serge Gnabry and Borna Sosa to name a few.

New head coach Markus Weinzierl won’t accept anything less than a top 10 placed finish from his team this season and after the signings of prodigious talents such as Niklas Dorsch and Arne Maier, the club will be brimming with confidence in their ability to do so.

The attack is where the hidden gems in Bundesliga Fantasy are to be found from FC Augsburg with André Hahn and Daniel Caligiuri expected to be the best options for the second year running. Another one to watch is Swiss international Ruben Vargas who has been improving gradually over the past few seasons and could soon become the club’s next big player if he keeps making good progress.

In defence, there isn’t much to chose from except the full-backs if you really want someone from one of the worst defences in the league last season but keeper Rafał Gikiewicz deserves a mention for being one of the best shot-stoppers in the league ever since he joined FC Augsburg.

Augsburg have grown into one of the more exciting teams in the league over the past few seasons after a few close calls with relegation and the trend seems to continue this year with some really promising signings to improve the squad. Still, it is expected that the club will compete for one of the mid-table spots and Augsburg players will only be considered viable options once the fixtures ease for the team from Matchday 8 onwards. 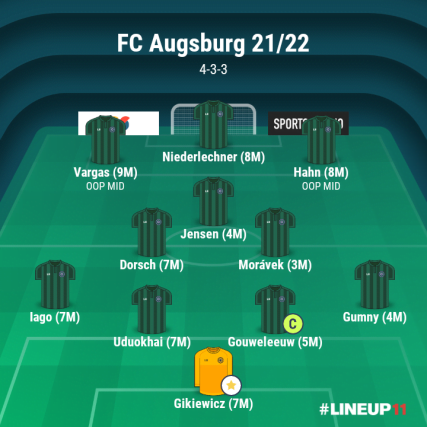