Bundesliga Fantasy: Team Of The Season So Far 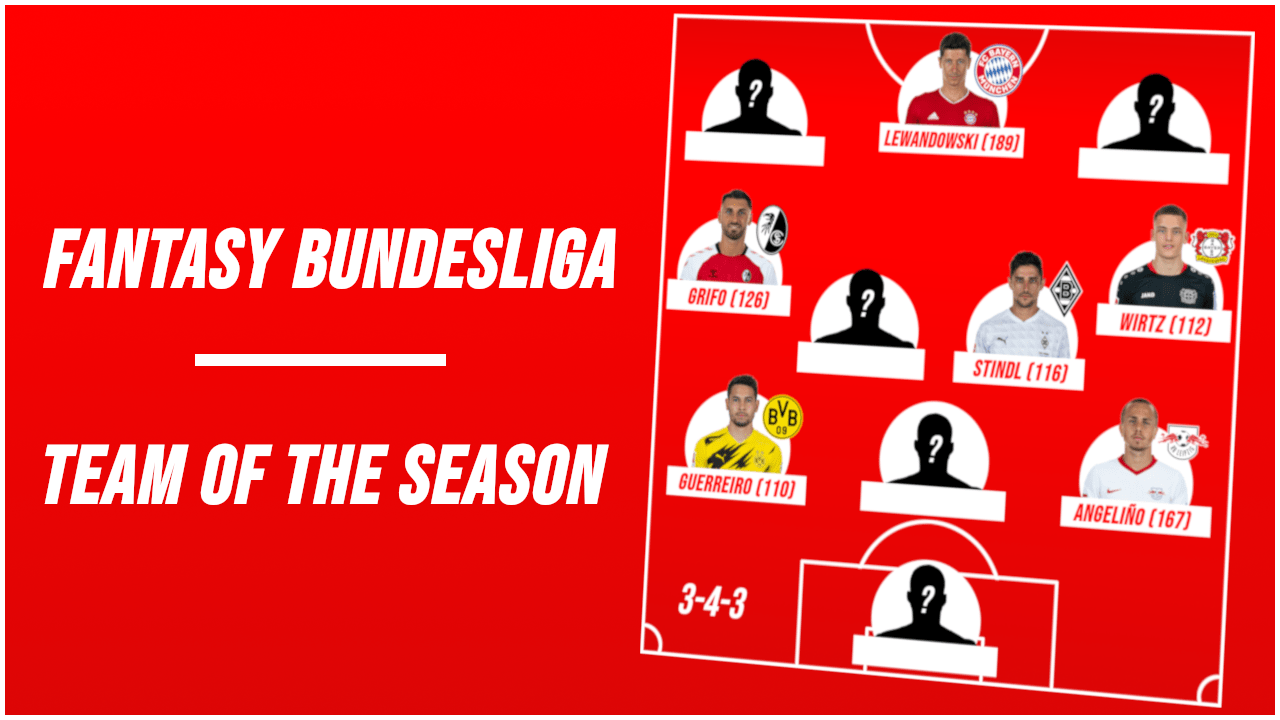 If you thought his last season tally of 34 goals in 31 games was a one-off then you are gravely mistaken. The Best FIFA Men’s Player of the year is right on track for another shot at breaking the legendary striker “Der Bomber” Gerd Müller’s all-time goal-scoring record with 17 goals in 12 matches already to go along with four assists. He is the highest scorer in fantasy this season with 189 points and is averaging higher points this season (16) than last season (14) in which he also finished as the highest scorer. Lewandowski has only failed to return in two games that he has started this season so not having him in your team isn’t an option. He is ageing like fine wine and is simply the best asset in Bundesliga Fantasy there is.

Müller is second amongst forwards for fantasy points scored this season with 155 points. He might’ve started the season on a hot note with three goals and four assists in his first four games but has cooled down since then with just two goals and assists in his last five games as teammate Kinglsey Coman’s resurgence in form meant that both are now tied for most assists this season with seven and it made him the second-best forward option from FCB in fantasy towards the end of the year. Still, his partnership with Lewandowski forms the most lethal attacking duo in the league accounting for almost 60% of Bayern Munich’s goals and he always remains a tempting option for a double up.

The dutch big man has been enjoying a purple patch as of late and has already scored over half the goals this season (9 in 13 games) compared to his highest ever tally in the Bundesliga of 17 goals in 34 games set in 18-19 for which he has been rewarded with 130 points. The schedule has mostly been on the easy side for Wolfsburg so far (which explains their fourth position) but as tougher games keep approaching, you can still rely on Wout Weghorst and his ability to use his head (to score goals of course!).

Grifo has always been a reliable option in fantasy but it was still unexpected that he would be the best midfielder in the game this season over other premium midfielders with 126 points for his six goals and four assists. He was mostly overlooked at the start of the season since he only had two goals and assists in eight games but he immediately became a must-have as he went on to return in every game since then with four goals and two assists in five games. Got a set-piece and need a lethal right-foot? Call Grifo.

After the injury to Hofmann and the form of players around him falling at an alarming rate, Stindl stepped up big time to lead Borussia with eight goals (highest amongst midfielders) and an assist in 13 games. His highlight so far, however, was his hattrick against Frankfurt on matchday 12 which included two goals in added time to draw the game 3-3. He is a contender for the most improved player award if there ever was one.

Some might even forget that Kai Havertz left Bayer Leverkusen this year but that is the kind of effect that Wirtz has brought with him. The 17-year-old attacking midfielder has filled in his boots perfectly and was also the youngest goalscorer in Bundesliga history before Moukoko broke his record. Eventually going on to score two goals and assisting four this season. Wirtz has been an absolute bargain at just 8.1M for a player that possesses the same talent and potential as Havertz which makes him the most affordable outfield player on this list.

Wirtz’s senior at 18 years, he has beaten fellow teammate Jadon Sancho to feature on the list with 111 points in fantasy to his name. Reyna also has more goals and assists than Sancho while costing just 8.7M compared to Sancho’s 18.5M and is another certain star in the making. Both Reyna and Wirtz have been an incredible value of money in fantasy and might be must-haves going ahead.

Angeliño has been a real superstar this season and should be one of the first players on your team along with Lewandowski when you wildcard. He has scored the second-highest points so far with 167 points and is tied as RB Leipzig’s top goalscorer in the Bundesliga with four goals along with two assists. Leipzig have also conceded the least goals this season with nine and have kept the most clean sheets with six. Angeliño has returned with double-digit scores in eight out of 12 games this season and has eclipsed 20+ points thrice. This man is turning into a real fan favourite now.

If we are talking about fan favourites then Guerreiro is one of them and his inclusion in the team of the season is no surprise after his position was corrected from midfielder to defender for this season. His two goals and five assists make him the defender with the most goal contributions so far with 110 points to show for it.

It is rare for a centre back to be one of the highest-scoring defenders in the game over full-backs and wing-backs but Hummels makes the list on the back of three goals and five clean sheets for a total of 109 points at an average of eight points per game. I think you should also be wary of the fact that even though Dortmund kept five clean sheets in their first six games, they’ve conceded in every game since then (16 goals in seven games).

Probably the most surprising inclusion in the team of the season, newly promoted team Arminia Bielefeld’s goalkeeper Stefan Ortega makes the list on the back of some strong keeping displays despite conceding 23 goals and keeping just two clean sheets this season. You might wonder how but Bundesliga Fantasy’s bonus points system means that Ortega is generously rewarded for saves that he makes. Which explains his average of five points for just saves per game.

Team of the season after matchday 13 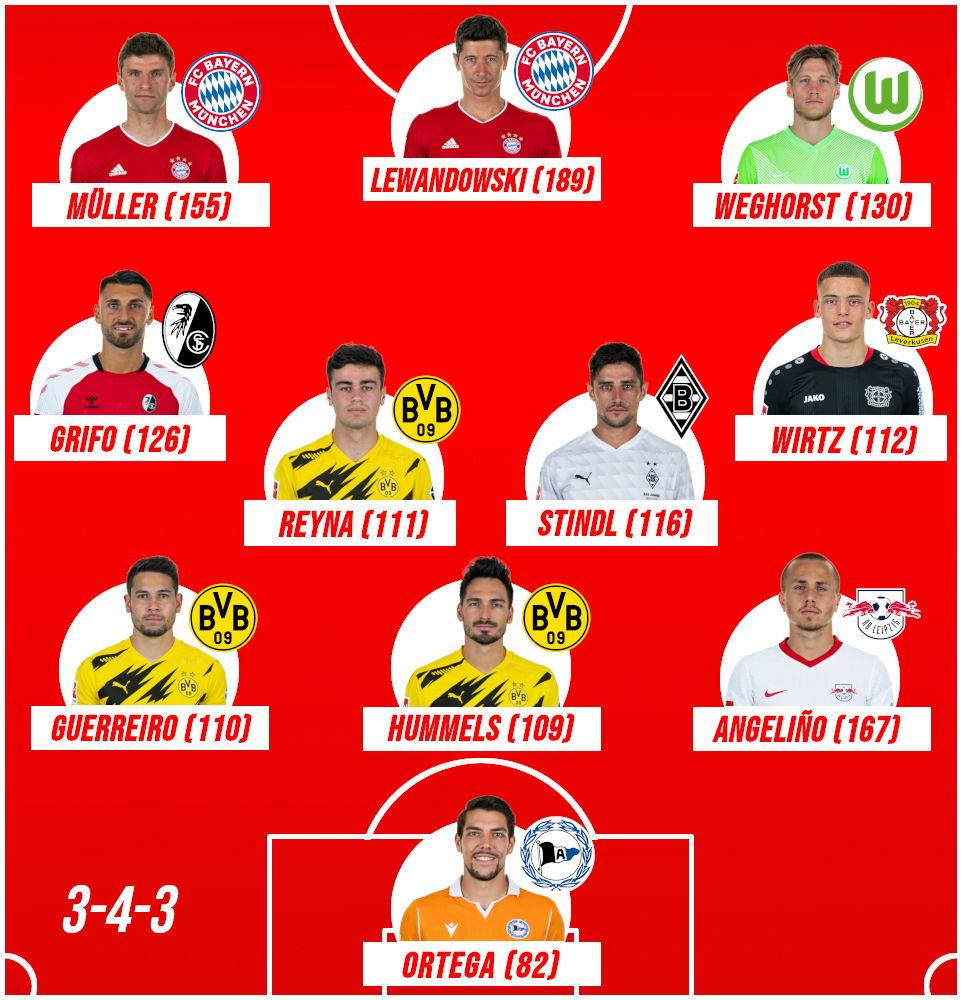