UCL Fantasy Must-Have/Template Players for Round of 16 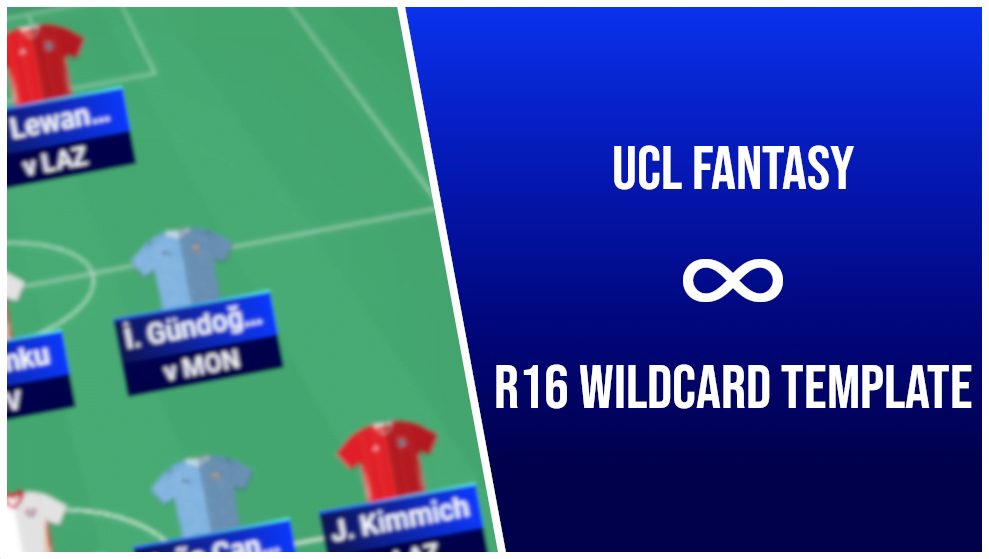 UCL Fantasy returns after a two-month break and as some thrilling European football awaits us, we look at the must-have players and the template team for the round of 16 stages.

The current holder of the Bundesliga golden boot aka the “Torjägerkanone“, Lewandowski currently has the most domestic league goals in the top five leagues with 25 goals this season. He is also one of the most in-form players in the world and had a nine consecutive games goal-scoring run in the Bundesliga snapped by Hertha Berlin last week. Lewandowski hasn’t had the best showing in the UCL so far but with such stellar form, one can expect him to possibly score in both games against Lazio as the focal point in attack for the defending champions.

The Morrocan international is in the midst of a breakout season right now, scoring 13 goals for Sevilla in the La Liga and only sits behind names such as Luis Suárez and Lionel Messi on the goal-scoring charts. En-Nesyri has every type of shot in his arsenal, is double-footed so he can score from both feet and he is equally dangerous from headers – one of Borussia Dortmund’s weaknesses that teams have been able to exploit successfully.

There couldn’t be a better time for Leipzig to play Liverpool than this week. The Reds have been in a slump for a while now and they mostly have their defensive woes which were brought on by injuries to key players such as VVD and Matip to blame for that. Last year’s semifinalists RB Leipzig will be confident of securing a home advantage and their main creative outlet Nkunku will be an indispensable member of the attack as they aim to secure a spot in the quarter-finals at the cost of yesteryear’s champions.

It might’ve taken him six games to get off the mark but Gündoğan has been in unbelievable form for Manchester City since then with 11 goals and two assists in his last 11 Premier League games. He has helped the Citizens solidify their position at the top of the table and will look to replicate the same performances against Borussia in the Champions League, a game where they are heavy favourites. and he costs just €6.7M. If there was an award for the most improved player or fantasy asset, then no one would deserve it more than him.

He is on the sidelines currently due to Covid-19 but is expected to return for the game against Lazio and provide a big boost to the Bayern Munich attack. The current Bundesliga assist leader’s form is might not be as impressive as that of Lewandowski with four goals and five assists in his last eight games but he is as important to the team as him. If you don’t want to test your luck and want a safer option then his challenger for the title of Bundesliga assist king and teammate Kingsley Coman is another option.

Even though he is a defender, he has a goal threat that rivals other midfielders and forwards. Angeliño already has three goals and three assists in the Champions League this season and considering how much Liverpool have struggled recently to score as well as stop conceding, there is potential for him to be involved in goals as well as keep a clean sheet against them.

Romero might’ve played just five games but he was the highest-scoring player in the group stages with 50 points at an average of 10 points per game most of which were 22 points just for ball recoveries and although clean sheets aren’t to be expected against Real Madrid, he is always guaranteed bonus and boasts of the highest floor in the game. If you prefer ceiling over floor and goals over bonus then-teammate Robin Gosens is another alternative with six goals and four assists and he has the most goal involvements for a defender in the top five European leagues this season.

The absence of Kevin De Bruyne was a big blow to City but Cancelo has stepped up in his place as the primary playmaker despite being just a defender. Cancelo might not have many goals or assist yet but has strong underlying stats and is the most attacking defender from the best defence in the Premier League.

Koundé shot into the limelight for his goal against Barcelona last week where he dribbled past multiple defenders before beating Ter Stegen to score and give Sevilla the lead in a Copa Del Rey semi-final match which they eventually went on to win. Sevilla are the most in-form team in Spain currently and have conceded just 16 goals in 22 games. Their next opponents Borussia Dortmund are in contrasting form with just one win in their last six games so Koundé could be a great bargain at just €3.9M.

No other defender could justify the price tag of €6.6M but Kimmich plays Out Of Position (OOP) in midfield, is on set-pieces and is also tied with Müller for the most assists in Bundesliga this season with 10. His two goals and five clean sheets are also worth mentioning.

Manchester City are used to dominating every game so you might not get a lot of saves from Ederson but he is a part of the defence that has kept a clean sheet in seven of their last eight Premier League games. He also chipped in with an assist in his last game and might possibly take a penalty soon if his teammates permit. 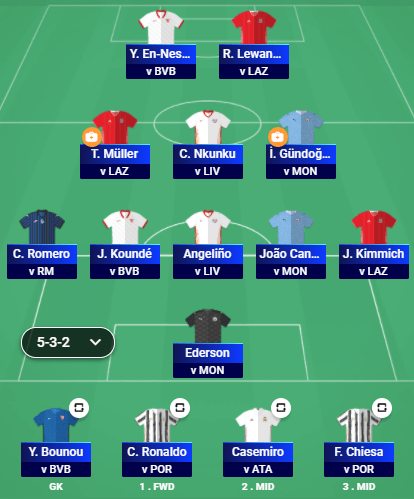