Sorare: Tipster Team for the Bundesliga Draft and Budget Gems 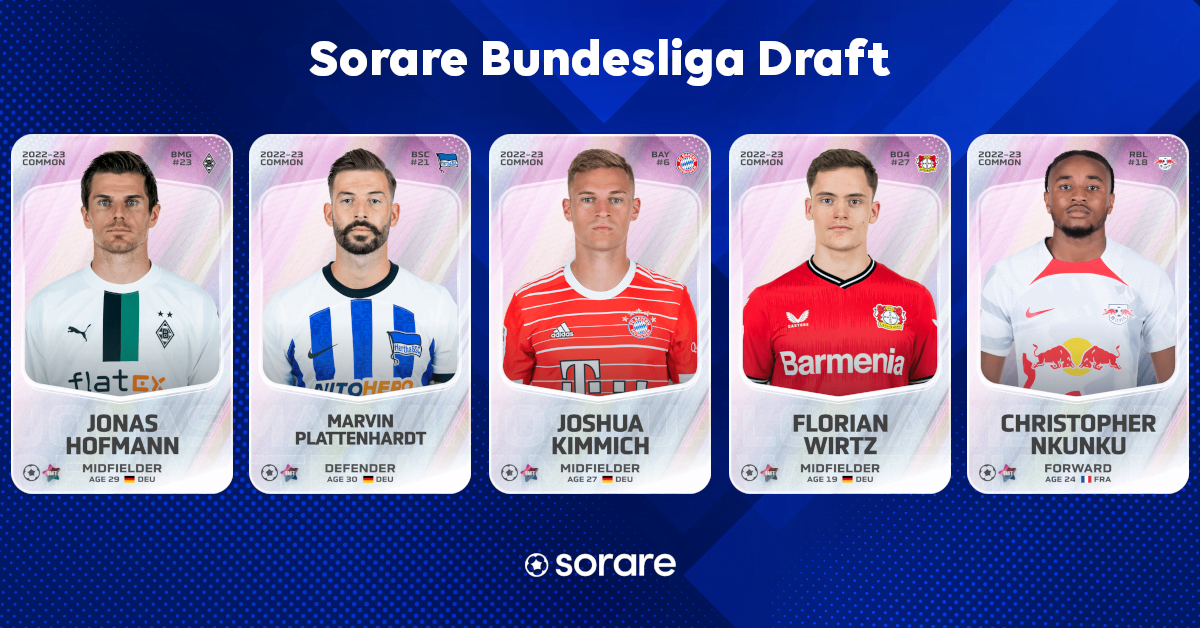 Sorare Bundesliga Draft Beta is a new game mode, but how does it work, and what are the best picks for gameweek 339? Read on to find out more.

How does it work?

You have a 400-point budget to select a squad of eight players based on their L15 average or the average score based on their last 15 games, which determines their price (you can learn more about the game in our beginner’s guide here). From your squad, you will select five players every week consisting of one player in each position and one extra outfield player of your choice. You can only choose two players from each club and swap a maximum of two players weekly for their original value to bring in fresh faces. The top 200 managers with the highest points will win tradeable limited cards every week.

Note: This is a Beta test for a few weeks, and you will lose all your drafted cards once the testing ends. Whether or not Sorare decides to keep this format permanently is yet to be seen.

If you haven’t signed up yet on Sorare, you can do so using our link and you will get a free limited card when you buy five cards from the auction – https://sorare.pxf.io/BundesligaFantasy.

Ideally, we would’ve preferred Christopher Nkunku as he is the top-scorer and probably the most consistent forward in the Bundesliga. Still, Musiala is a rising star and a safe bet for consistent returns in the upcoming weeks. Kramarić on the other hand has been on a decline but is still a reliable backup for the price and he has a decent set of games when the fixtures turn tricky for Musiala. I still believe Adli is the best budget forward at 35 gems, but he isn’t predicted to start, and his place in the starting XI isn’t always guaranteed, with so much attacking talent at the club.

This was the easiest part to select. Kimmich is a no-brainer because he is the best player in the Bundesliga by far, with an L40 average of 74.3, and even though Bellingham has been giving him tough competition, I expect his numbers to go down a bit with the return of Reus. Talking of Reus, he has been injured for a while and it has taken a toll on his average so he is available for a bargain at just 35 gems with a game against Augsburg. Just like him, Wirtz is another bargain at 35 gems and is an easy switch after the first gameweek as he faces Bochum.

Picking defenders is tricky since the Bundesliga does not have many standout performers but we are going with Evan Ndicka for one gameweek against bottom-of-the-table Schalke, who have scored the least goals, and Jeremie Frimpong, who has a high ceiling with five goals and two assists in just 15 games as a wing-back.

Sorare is yet to change Sommer’s club after his transfer to Bayern, and we are happy to jump on the wagon with his easy set of fixtures and high cleansheet probability, and saves potential in most games. Schwolow plays for Schalke, but he is cheap and slowly gaining form with his ability to rack up saves.

The plan is to transfer out Reus for Wirtz and Ndicka for a Leipzig or Dortmund defender if possible. If you can’t get Sommer in your team after his club has been changed, you can get Kobel for your second Dortmund spot or Flekken who has the most cleansheets in the Bundesliga so far. And with the money saved, you can upgrade Ndicka to Hummels after the first gameweek.

The expected XI for MD17. You can swap Frimpong or Wirtz in the starting XI for a Leipzig player like Raum based on who you think scores more.