How to Win World Cup Fantasy: Tips from 2014 Champion SorareUSA

With the start of the World Cup now less than a day away, we ask the champion of the 2014 edition of World Cup Fantasy, SorareUSA, for his tips this year.

What are your top 5 tips for World Cup Fantasy managers?

I’m in Istanbul, just had some of the best coffee of my life, and the World Cup starts tomorrow.

In a ~better late than never~ fashion, here are a few of my thoughts on the @sorare Global Cup and #WorldCupFantasy game. pic.twitter.com/dqOc9DVgrJ

What do you think are the common mistakes that people make?

SorareUSA: A common mistake people make is assuming this will be like FPL or mistaking club form/role for NT form/role.

Which position is the best to invest players in – forward, midfield or defence? Do you think expensive goalkeepers are worth it?

SorareUSA: I’m currently on Pasveer + Rochet. There are so many players in this that you’ve gotta take the risk with Pasveer. I also have Messi + Neymar + KDB at the moment so it’s quite top-heavy for me. Plenty of solid enablers make this possible IMO.

Do you prefer players with a high ceiling (possibility of getting multiple returns) or those who can rack up bonus for key passes, tackles, shots on target or a combination of both?

SorareUSA: This year, the scoring is quite simplified compared to the past years, so I’ve shifted my focus back towards attacking returns and clean sheets. Tackles just aren’t that common (interceptions or clearances would have been a different story). Combine that with luck needed to beat so many other players -> it’s mostly ceiling here.

Do you believe in going template or having certain differentials in your team every week? If so, how many?

SorareUSA: I haven’t looked at the % picked, tbh. It’s cliché but pick your guys. Even the “template” we might know is not a true template in the grand scheme of things. Pasveer, Davies, and De Arrascaeta are my “differentials” as of now.

Which are your favourite budget picks/enablers for this year?

Two picks that are must-haves for the first MD or for the Group stage, in your opinion?

SorareUSA: Must haves for me are Neymar, and then you can argue about KDB or Messi or Mbappe.

Do you avoid picking players that are likely to score against your own team, or do you pick to win either way? And the opposite, do you try to have at least one player from the team you support?

SorareUSA: Pick either way 100%. And currently, I have 0 US / German players. Hopefully, ill get a chance to be a homer for the knockouts.

Could you share the chip strategy that you have in mind for now?

SorareUSA: Nothing MD1. MD2 gonna be the 12th man. MD3 WC (this really depends on how the rules shake out, it sounds like MD2 could be a good WC choice too). And then save the big cap chip for the finals + 3rd place match.

Underrated countries in this tournament, according to you.

SorareUSA: Underrated? Germany and Denmark, at least according to goalimpact.

The player or players that you think are being overlooked the most and why?

SorareUSA: I feel like Davies is a bit overlooked cause he plays for Canada. When I won in 2014, I had Michael Bradley in my group stage team, and he absolutely racked up the points as a differential. There’s a different scoring system this year, but Davies is absolutely Canada’s star man and a steal for $5M. Korea’s Son is another one, although more warranted due to the injury concerns. But if he starts GW1, there’s a good chance I will bring him in for the remaining two group-stage games. He’s got set pieces locked up, along with being the main guy for Korea.

SorareUSA: My team as of now. I don’t see too much changing anymore, tbh. Monitoring the injury situation of Davies. 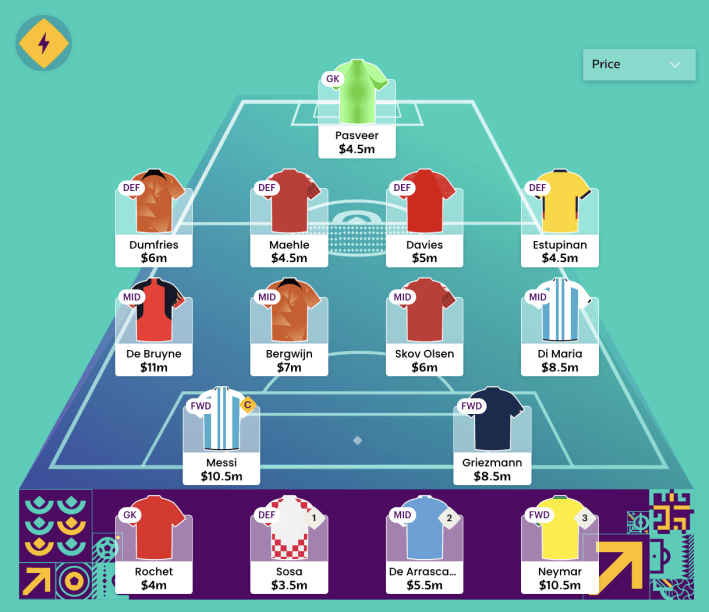 A big thank you to the former champion again for letting us interview him. You can follow him on Twitter @SorareUsa. We wish him all the best for the tournament this year!