How to Win UCL Fantasy: Tips from 21/22 Champion Daniel Turon 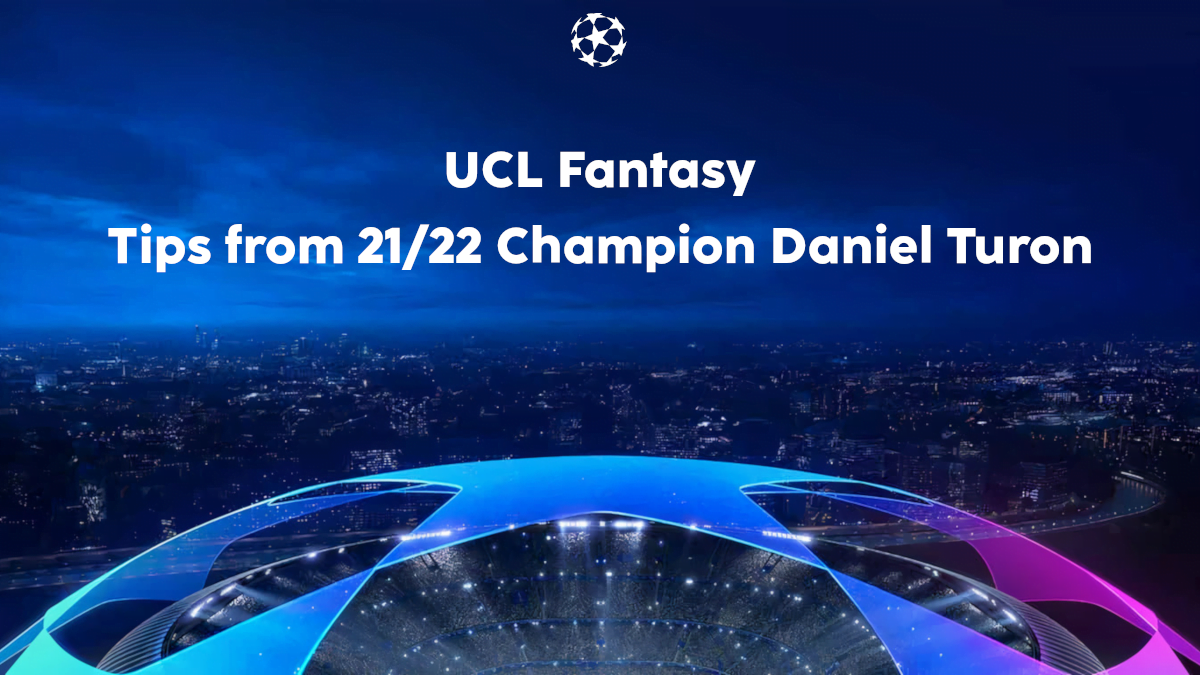 UCL Fantasy 22/23 season is just a few hours away, and we have 21/22 champion Daniel Turon to share his tips with us for the upcoming tournament.

First off, congratulations on becoming the champion! So when did you feel like you were going to win it all? Did you have any nerves?

Daniel: Thank you so much! I never really felt like I had it in the bag until the final whistle honestly. And in terms of nerves, they were actually through the roof for that reason. The worst (besides the final) would have been the second leg of the Manchester City vs. Atlético Madrid match, where it felt like City would concede every two minutes. I had three City defenders and still cannot believe they pulled through that game.

Did you have a strategy in the way you played last season? Did the teams of your close opponents have any effect?

Daniel: I did take into consideration the other teams in the final match, with each team I made, I was comparing hypothetically what the runner-ups could pick and what they’d need to catch me. This probably just resulted in me ‘overthinking and creating stupid tactics’ in the words of Pep Guardiola. But I was able to pull through in the end!

Which accounts, podcasts, websites, etc, do you follow, if any, or use for UCL Fantasy?

Daniel: I read most of the articles by ‘Never Manage Alone,’ who I’ve now had the lucky opportunity to write for. Besides that, the only fantasy content I got was just by frequenting the FantasyCL subreddit.

What are your top 5 tips for UCL Fantasy managers?

Daniel: Follow your gut and analysis over others. You’ll be way less upset if you’re wrong.

Plan your transfers for the next weeks. Like, create actual hypothetical drafts to make sure your wildcard + transfer plans will make sense.

Don’t underestimate ball recoveries. They add up and really give the edge to managers who take them seriously. Use an actual stats database such as fbref.com to compare players.

What would be your advice for new players

Daniel: Have fun, pick players you have a really good feeling about, even if others may not. My brother (new to UCL Fantasy) posted about Haaland at 4.5M a couple of years back and was told he’s not a great pick. Still, if you want to play seriously, immerse yourself in fantasy content. Visit the subreddit, read articles, watch content creators, whatever. You want to hear about all the viable picks people are taking, and then do your own analysis and make it your own squad.

Who was your MVP in UCL Fantasy last year?

Daniel: My MVP was most certainly Benzema. In the first leg of the quarter-finals, with the absence of Sane, I dropped from 7th to ~50. So, as a differential, I captained Benzema in the second leg, while nearly EVERYONE chose Lewandowski. Of course, Benzema scored a hatty that game and Lewandowski blanked. From then on, I swore to back Benzema always, and to this day, I still refuse to take him out.

Which position is the best to invest players in – forward, midfield, or defence?

Daniel: This year, I want four premium forwards. There are just so many options that it feels like it is a must to put down big money there.

Do you prefer defenders with attacking potential or those who are good at ball recoveries?

Daniel: It really depends on the price. I find some attacking defender options for the budget very tempting (Rensch, Tavares, Mendes). But I never have been too attracted to the premium dollar defenders. Really my priority is just the cheapest guys who have clean sheet odds. Then I’ll filter those by who has something extra—either ball recoveries in the top 15 percentile or some goal involvement probability.

Do you believe in going template or having certain differentials in your team every week? If so, how many?

Daniel: I have never taken much consideration of popularity in picks. Even with only template picks, there’s enough of them around that your team will end up different enough with transfers and everything. Just pick who you think will do well. Then if you end up close to the top of the leaderboard or your mini-league in the final stretch, now you can start thinking about differentials. My favorite differentials are generally captain swaps rather than new players (Benzema over Lewandowski).

Do you generally prefer a combination of big hitters + enablers or a spreading of funds? Along those lines, are there any players you think are notably undervalued? (@JP__Football)

Daniel: My strategy in the group stage last year was to first load up on as many good value low budget picks as possible, then just grab a bunch of premiums. I’ve gone even harder on that strategy this year. Maybe too far…. we will see, but I certainly do have many premiums. 4/5…. should be interesting and fun.

Two picks that are must-haves for the first MD or group stage, in your opinion (@BigBallzz_Pod)

Daniel: For the group stage in general, I’d say in his current form, I respect those who are brave enough not to pick Haaland. I am not. Lewandowski is also very enticing if you can afford to transfer him out after MD1.

Could you share the chip strategy that you have in mind for now? (@alboteanu_cata)

Daniel: I usually build my chip strategy around the fixture with the most enticing limitless. And then figure out how to use the wildcard from there. So I am planning on using limitless for GW3, and wildcard for GW4. Although I know, many won’t prefer that because then you aren’t taking advantage of the mirrored fixtures for MD3-MD4.

What matchdays should the wildcards be used?

Daniel: There are many strategies to make this work. There’s no one answer. Although all the strategies I have seen and liked used the WC at MD4 at the latest. Another very nice strategy is to make a free hit team for MD1, wildcard on MD2, and keep that team all the way to MD6, taking advantage of both mirrored fixtures. And then use the limitless MD6 and pick teams less likely to rotate. This is far better structured for transfers than mine. But doesn’t have as big mismatches in fixtures for the limitless.

Your teams to target for the start of the tournament?

Daniel: Haifa and Plzen’s opponents. Manchester City is also very strong, and with Haaland as a high-scoring threat against any team IMO.

The player that you think is being overlooked the most and why?

Daniel: Haaland. Only 47% have him…. on a real note, I don’t have any completely unheard-of picks. I’ve got a couple of 1%, though. Rensch is a 4.5M defender for Ajax with a couple of goal involvements already. Many may be scared away by Liverpool on MD2. But Liverpool’s scoring threat hasn’t looked amazing this season, besides the one obvious game.

Daniel: Unfortunately, I don’t want to share my actual draft for two reasons. First, I don’t want anyone who wants a free team that should be pretty good on paper to copy me. And for those that are serious players, I don’t want you to get too caught up in choosing a similar team to mine because there are sooo many viable teams that are just as good or maybe better that look completely different. Just enjoy making your own team, and read about tips for players to scout, but don’t start with drafting a team similar to a more experienced player.

That said, I am happy to give my thoughts on any player picks, and can be found on Reddit. Either in the FantasyCL subreddit or by PM’ing me on u/all_u_can_eat_soup.

A big thank you to the champion again for letting us interview him. We wish him all the best as he looks to defend his title next season!