FPL Tips: Planning for the Upcoming Blank and Double Gameweeks 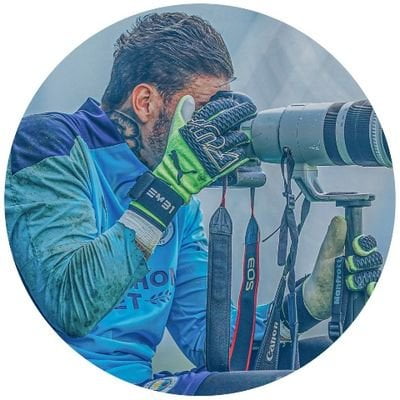 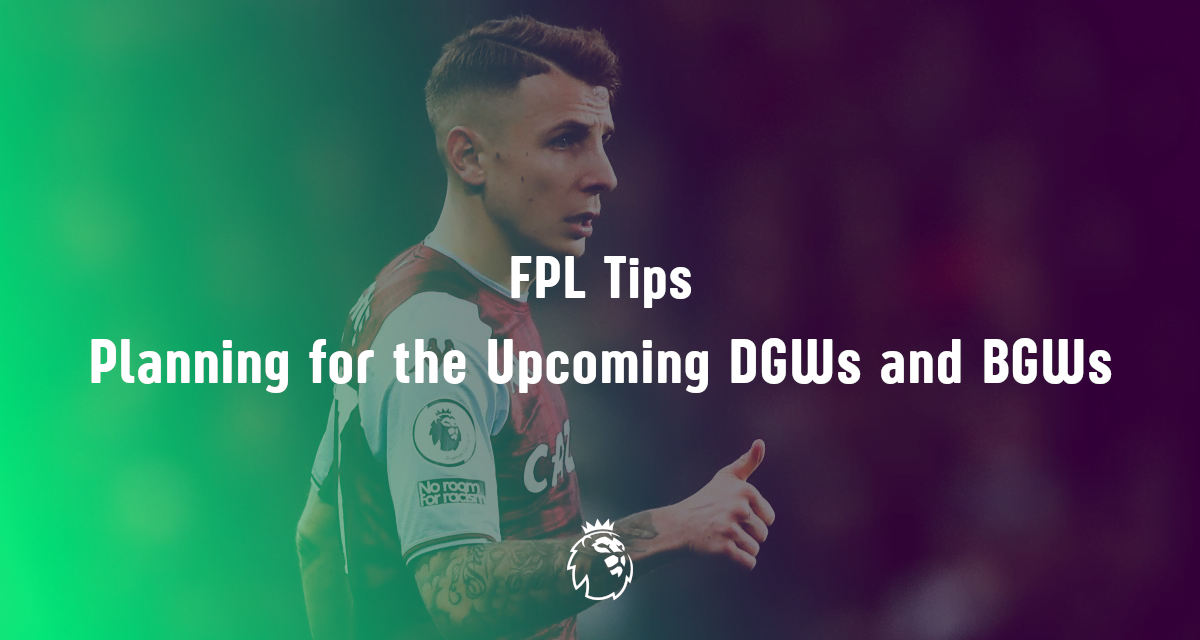 The combination of some surprising results in the FA Cup and a growing backlog of delayed games have caused a massive change in the FPL schedule, resulting in some big double gameweeks and blanks up ahead. Fantasy Tipster Rae looks at the chip strategy and players to consider for the upcoming weeks.

Teams with Double Gameweeks in FPL

The newly updated fixture list has a total of ten teams having DGWs between the period of matchday 25 and 26. Manchester United and Brighton are the only teams with a double in gameweek 25. In gameweek 26, a total of eight teams have two games and they are:

Teams With Blank Gameweeks in FPL

Chelsea, Arsenal and, Liverpool all have blank gameweeks coming up. Chelsea and Arsenal won’t feature in Gameweek 25 as Chelsea have Club World Cup duties in the UAE. Liverpool and Chelsea also won’t play in gameweek 27 as they would be playing in the carabao cup final. 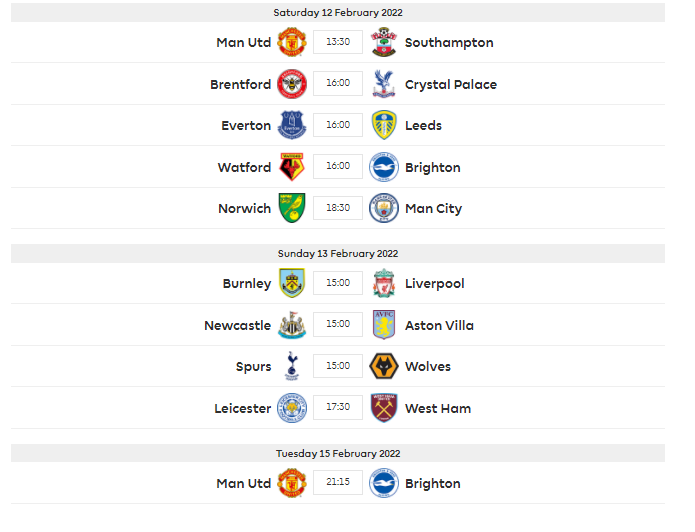 Man United and Brighton have a double in gameweek 25, while Chelsea and Arsenal blank in the same matchday. During this period, the best move for FPL managers is not to play any of their chips as there would be bigger doubles and worse blanks in the upcoming weeks.

When You Should Free Hit

Gameweek 27 is looking like the best time to play the Free hit chip with Chelsea, Arsenal, and Liverpool having blanks in the same week. It depends on the number of Arsenal and Liverpool FPL assets one has. If you have two or more Arsenal players and three Liverpool assets, you would be looking to play your free hit in GW27 as you’d be left with just six players that week.

Suppose you don’t play the Free hit chip in BGW27. The best thing to do would be to reduce the number of Arsenal FPL assets you buy in DGW26.

When You Should Use Your Triple Captain Chip

DGW26 is looking like the best time to play the triple captain chip. With Mohamed Salah returning and Liverpool having a double gameweek, there’s no better time to triple your captain points. Liverpool in DGW26 face Norwich City and Leeds United, two teams hovering dangerously close to the relegation zone. These are two fixtures with an FDR of two and opponents that Salah always seems to bag goals against. This would be the perfect time to use the triple captain chip. 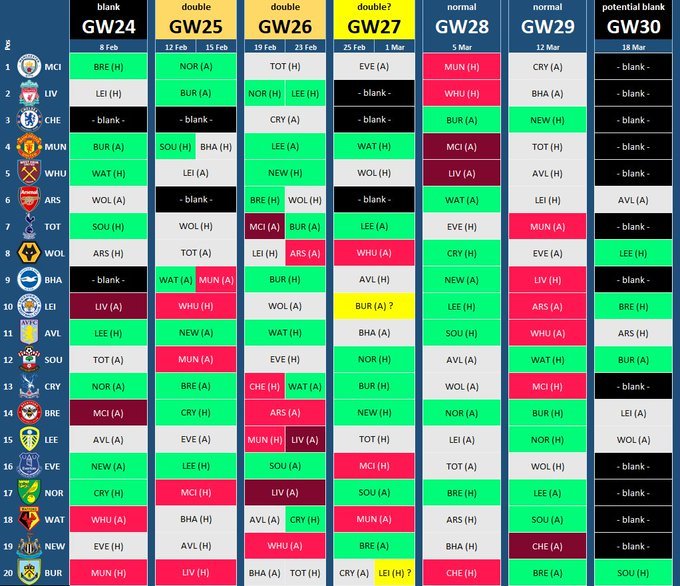 After gameweek 25, Southampton have some easy fixtures coming up with the saints facing Everton, Norwich, Villa Watford, and Burnley. These days one of the things FPL managers do before picking an asset is to check if he’s on corners, free kicks, or penalties. With James Ward-Prowse, there’s no need to worry because you’re getting a set-piece specialist.

He has now scored 12 free-kicks in the English top-flight, with only the great David Beckham ahead on 18. The Saints midfielder is valued at £6.3M and is owned by only 3.4% of FPL managers. This season, his six goals are the most for the team, and he tops the charts for the most chances created, most points per game (4.1), and total points for Southampton this season.

Selected by only 5.2% of FPL managers, Armando Broja is a great differential pick. The Southampton forward who is on loan from Chelsea has scored five goals this season and has picked up 64 FPL points in the process. Only Ward-Prowse has scored more goals for Southampton this season, and only Armstrong carries more goal-scoring threat than the 20-year-old. This season, his standout performance was the game against Crystal Palace, where he picked up 12 points after scoring, assisting, and winning three bonus points. Aston Villa, just like Southampton, have pretty good fixtures coming up with good FDR.

The only problem is that Broja could face a spell on the sidelines after being forced off the field in their win over Coventry City. Otherwise, when fully fit, he is undoubtedly one of the best budget forwards in FPL.

Lucas Digne (£5.1M) is the most bought player in gameweek 24, with 136404 FPL managers bringing in the Villa full-back. The ex-Everton man sold this January window had a truly noteworthy introduction against his previous side. Lucas Digne assisted Emi Buendia from a corner as Villa beat Everton 1-0. There’s a reason why the Villa man is highly sought after. Lucas Digne is an attacking full-back who loves to put crosses in the box, whether from set-pieces or open play. He’s also a full-back who carries a goal-scoring threat with his free-kick ability.

Mohammed Salah has been away on international duties and has been sold by most FPL managers. If you haven’t bought him back, now is the time to do so. Mohammed Salah is the FPL player with the most points, and he is also fixture proof, making him an asset that you can give the captain’s armband every matchday. With fixtures that have an FDR rating of two in DGW26, it’s really hard to look past the Egyptian. Mohammed Salah is also an asset you should be looking to triple captain in DGW26 as he faces Norwich and Leeds United.

Four of Manchester United’s next five games have FDR of two which means they have easy fixtures that they should be winning. United aren’t affected by any blank and have a double coming up, which makes David De Gea the goalkeeper to have for the upcoming gameweeks. He could be a direct replacement for Aaron Ramsdale in DGW25 when Ramsdale doesn’t play. Despite Man united keeping only five clean sheets this season, De Gea has managed to rack up 90 points while averaging 4.1 points a match, and his 84 saves this season are the most by any goalkeeper in the league.

Not only that, David De Gea has been excellent when it comes to saving penalties. This season he has saved two penalties. When it comes to keepers in FPL, they’re not much better than David De Gea, and in DGW25, he should be your first choice. Manchester United has the easiest set of fixtures on paper, with an FDR of two.