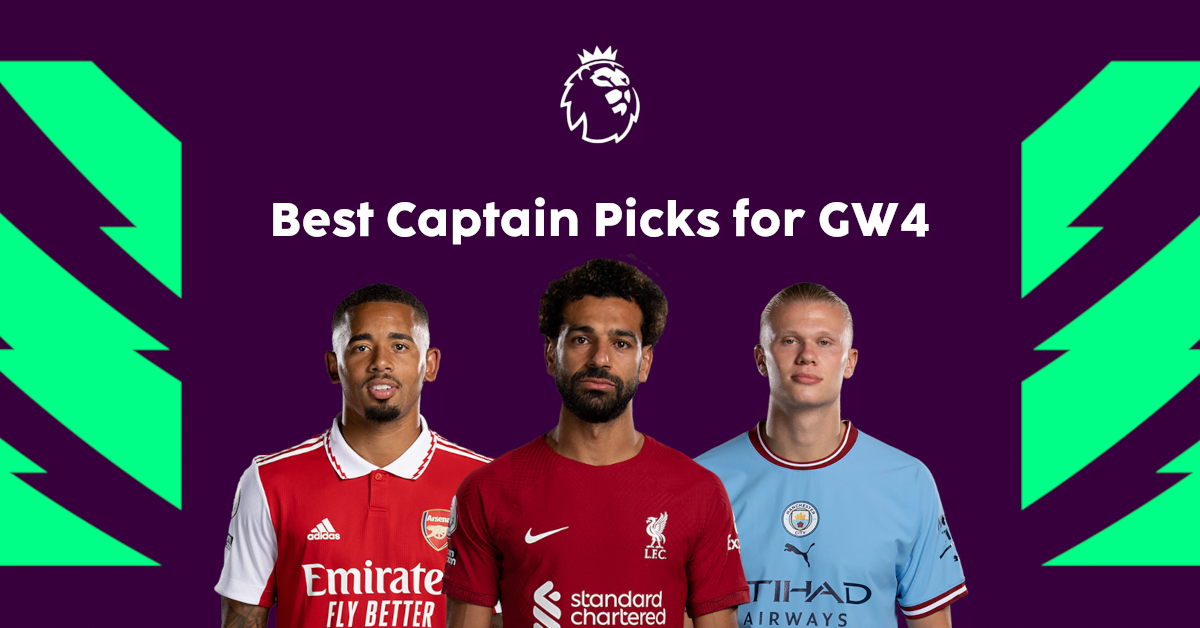 With favourable fixtures for almost every big team including Manchester City, Liverpool, Arsenal and Spurs, selecting the right captain in FPL is a bit of a dilemma for gameweek 4. But tipster FPLbanovic is here to help, sharing his thoughts on the best captain for the week in this article.

Captaincy is one of the most important decisions an FPL manager can make. It is essential for a green arrow. so, who is the best captain for gameweek 4? In this list we will take a closer look at players that we think are the best captain picks for this gameweek.

Mo Salah has scored in all six of his league matches against AFC Bournemouth and boasts an impressive record against newly-promoted sides in general with 18 goals against them. With two consecutive losses, conceding seven goals while scoring zero in their last two meetings against Arsenal and Manchester City, Bournemouth comes to the game with poor form and Liverpool’s game will not be any different. Their xGC (away) is 2.76 per match and they will probably concede. The Egyptian king is the safest bet and the standout captain. He also tops the projections for most expected points in FPL this GW.

Anyone who watched the game vs Bournemouth knows that It could’ve been much better for Jesus last week. VAR ruled out his goal with an offside of the tightest of margins and he missed a one-on-one attempt against Tavares. So despite returning only four points, he could’ve easily had another double-digit haul to his name.

Fulham have conceded four goals in three matches so far. Their xGC (away) is 2.18/match and with the Gunners’ current form, they will probably concede more than once. Jesus is expected to be a popular captain pick again even amongst the top 10K managers and has massive ownership (82%, which is an FPL record) that makes him a reasonable captain pick.

Harry Kane vs. Nottingham Forest (A)

Following his last-gasp equaliser at Chelsea last week, Kane proved to be clinical again after his header helped his team to a 1-0 win vs wolves. Kane now has two goals in three matches and his next opponent is Nottingham Forest, a team that is weak at stopping opponents from creating chances. They have an xGC of 2.45/match and Kane can exploit their weaknesses with his potential to score goals as well as assist.

Crystal Palace have failed to keep a single cleansheet so far. They have conceded four goals in three matches and they have an xGC (away) of 2.56. Opponents Man City on the other hand have an xG of 2.44. They are very strong in creating attacks and finishing and will probably win this match with multiple goals. Given how many chances City create and with Halaand obviously as their target man, there is no doubt that he is always a great captain pick. And in a week where most people will captain Salah or Jesus, he could be a decent differential if you entrust him with the captain’s armband.