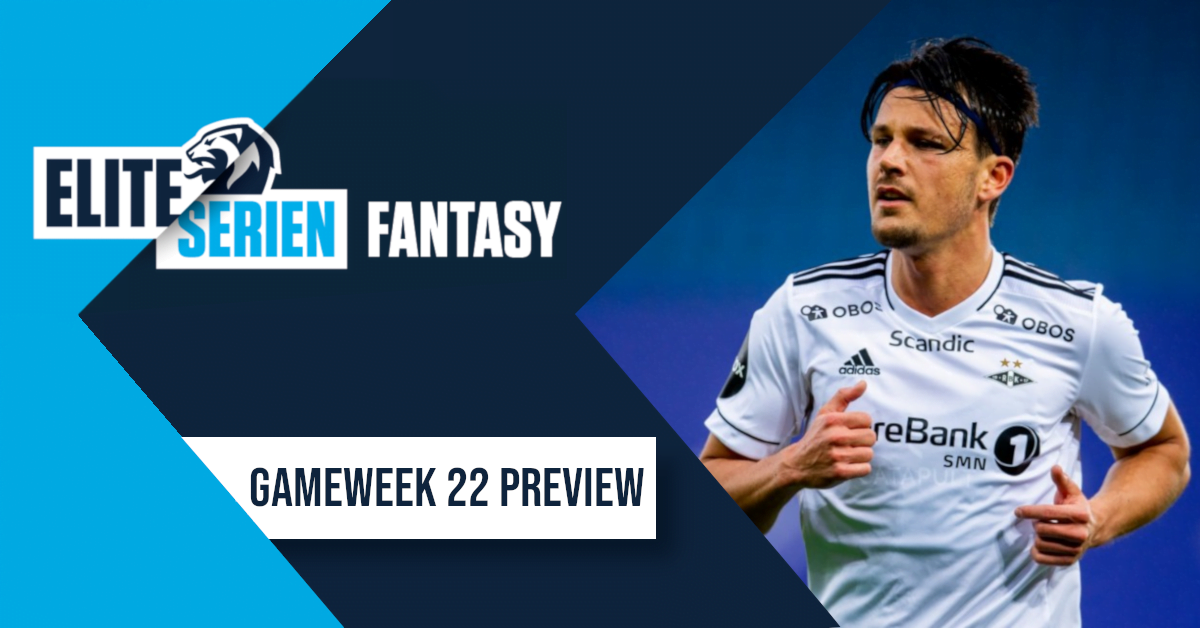 While Omoijaunfo is an easy play for this week, Fantasy Tipster Jacob Silkstone thinks that Amahl Pellegrino is also worth considering for the captain’s armband in his Fantasy Eliteserien player picks for gameweek 22.

Three players stood out as our selection scored a total of 80 points, comfortably above the overall average of 53. Despite his team being reduced to ten men early on, Veton Berisha proved to be a solid captain pick — scoring twice and earning maximum bonus points as Viking battled past Sandefjord. In defence, Fredrik Andre Bjørkan finally delivered the monster haul he’s been threatening since the beginning of the season: a goal, an assist, a clean sheet and three bonus points for a total of 18. Between the posts, we were slightly lucky to get a penalty save from Julian Faye Lund but unlucky not to receive a single bonus point: the “man in the stands” system continues to produce some mystifying outcomes.

Brann may still be strong relegation candidates, but they’re unbeaten since German goalkeeper Lennart Grill (5.0M) joined on loan from Bayer Leverkusen during the summer transfer window. With Stabæk (scoreless in their last two games) visiting this weekend, Brann find themselves in the rare position of being favourites to win. With several budget goalkeepers facing tough fixtures in Gameweek 22, Grill is our best tip for a surprise clean sheet.

Fredrik Andre Bjørkan (now 6.3M) is close to an automatic pick as Bodø/Glimt attempt to stretch their three-point lead at the top of the table. Glimt have the best defence in the league, conceding just 19 goals so far this season, and opponents Sarpsborg have just two goals in their last five away games. Bjørkan has racked up 27 fantasy points over the previous two gameweeks, making him officially the most in-form player in any position.

Centre-back Sheriff Sinyan (5.4M) remains the most budget-friendly route into Molde’s defence as the title challengers face struggling Tromsø. Molde manager Erling Moe might not be compared to Pep Guardiola all that often, but one thing they have in common is a punishingly unpredictable rotation policy: Sinyan, though, is as close to “nailed on” status as it gets. He has now played the full 90 minutes in each of Molde’s last 11 league games, notching a goal and two assists along the way.

This week’s relegation six-pointer in Bergen is expected to be a tight game with goalscoring opportunities at a premium. Stabæk’s defensive form has picked up recently, and double gameweek hero Simen Wangberg (4.4M) will be key to their hopes of coming away with a crucial point. He also poses a significant threat at set-pieces, with three goals already this season.

Sarpsborg were hammered 5-0 by midtable Strømsgodset in their last away game, so it’s fair to say they’re unlikely to be relishing a trip to face league leaders Bodø/Glimt. Amahl Pellegrino (12.1M) retains his place in our selection and is a strong contender for the captaincy. Although Pellegrino failed to produce any fantasy points last gameweek, he was applauded off the pitch by the Glimt fans after another scintillating performance.

Rosenborg’s Stefano Vecchia (9.6M) finally blanked last gameweek after a run of seven goals in his five games (unsurprisingly, the blank coincided with his overdue arrival in my own fantasy team). We’re backing him to bounce back in a crucial home game against Vålerenga: Vecchia’s previous three matches in front of his own fans have produced five goals and eight fantasy bonus points.

Haugesund’s Niklas Sandberg (7.5M) has had an underwhelming season so far, but a home game against bottom-of-the-table Mjøndalen provides the perfect opportunity to add to his current total of three goals and five assists. Mjøndalen have conceded seven times in their last two away games.

Kristoffer Normann Hansen (6.0M) is back from injury, and his return might be exactly what Sandefjord need. One win in their last eight games has left them looking nervously over their shoulders towards the drop zone, but Normann Hansen has produced returns in three of his last five and remains crucial to their hopes of securing safety. Odd, this week’s opponents, have shipped seven goals in their last three matches.

Ohi Omoijuanfo (12.4M) will be bidding to extend an extraordinary home goalscoring record when Molde face Tromsø. He has twelve goals in his last six home games, and the last time he started in front of his own fans and didn’t produce a fantasy return was back in Gameweek 1 (when he had a penalty saved against Kristiansund). Every run has to come to an end at some point, but we’re backing him with our captain’s armband again this gameweek.

Erik Botheim (10.2M) provides another route into the Bodø/Glimt attack for their fixture against Sarpsborg. Botheim started his Glimt career by scoring in each of his first five league games, but his form dropped off in mid-season. A quick glance at his record shows he’s the kind of player fantasy managers love to describe as ‘streaky’, and he’s currently on a run of three goals in three games. If you’re in the mood for a differential captain, Botheim could be your best bet.

Brann’s Aune Selland Heggebø (6.2M) returns to our selection as a cut-price third striker. Heggebø has attacking returns in six out of seven games since securing a regular starting spot in GW15, and he’s sure to be up for the challenge as Brann face a must-win clash in front of their own supporters. 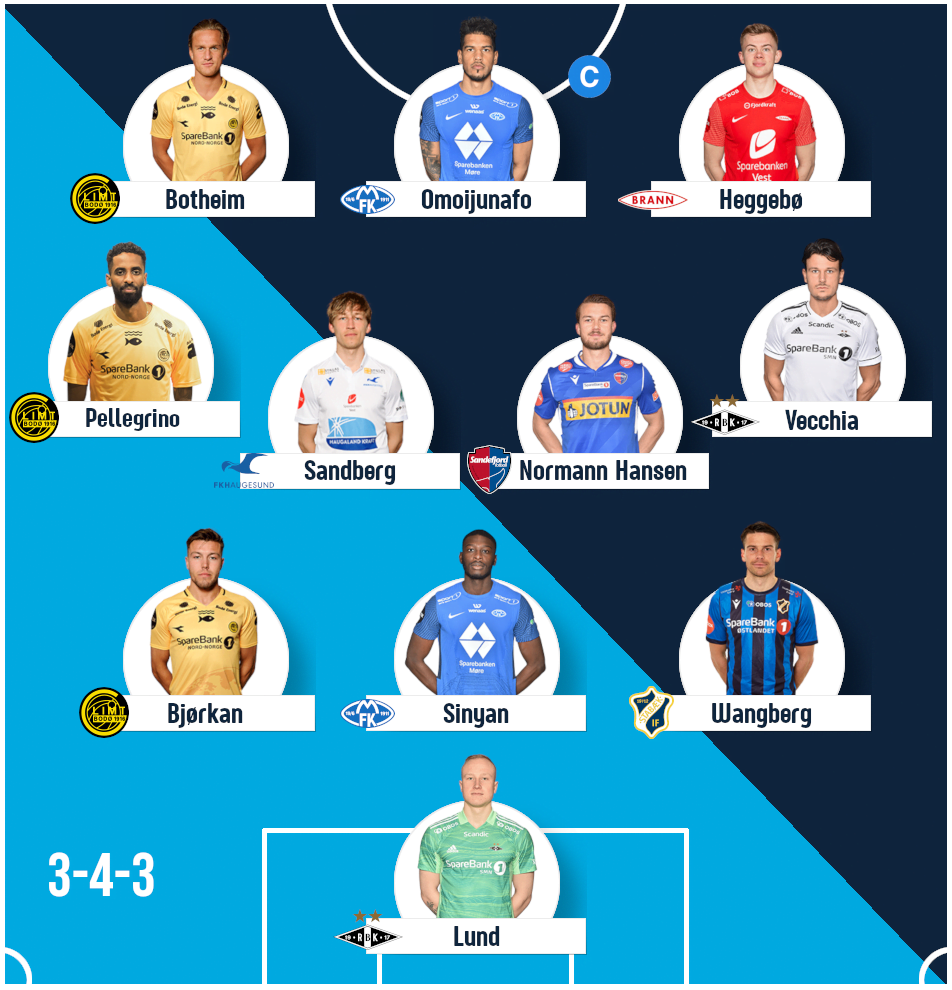