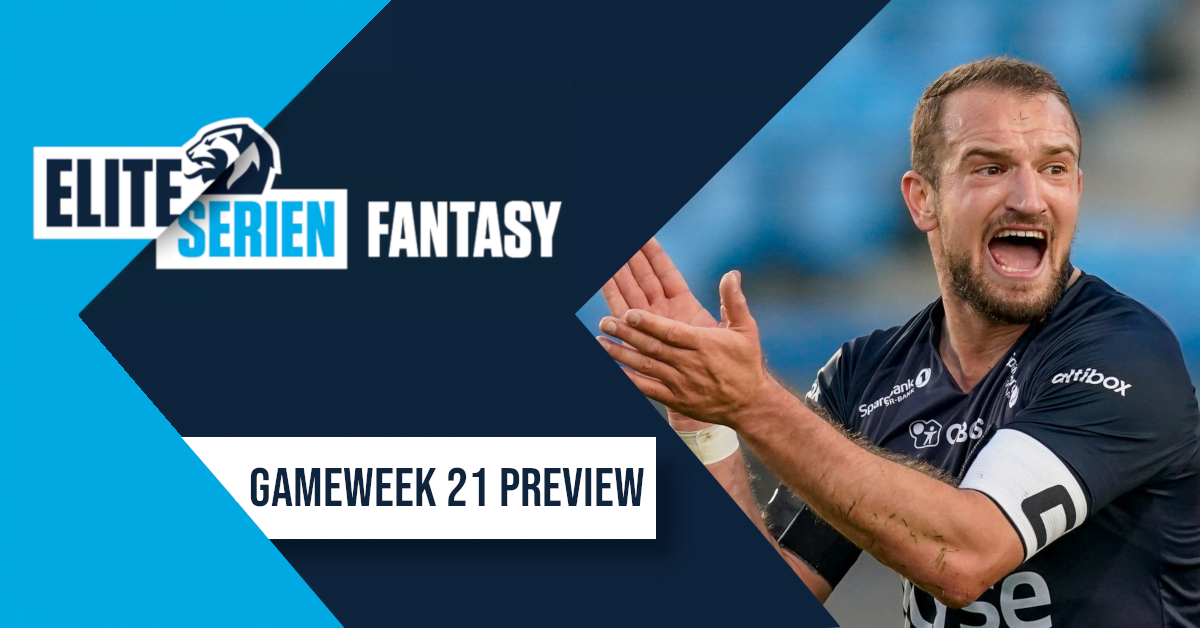 Molde’s Ohi Omoijuanfo might be the top goal-scorer in the league currently but his away form has been far from impressive, forcing Fantasy Tipster Jacob Silkstone to get creative with his Eliteserien Fantasy captain pick for gameweek 21.

Few would have predicted that Stabæk defenders would emerge as the heroes of the season’s final (probably) double gameweek. Having not kept a single clean sheet since Gameweek 5, the relegation candidates kept out both Sandefjord and Strømsgodset when it mattered most for their fantasy owners. With Strømsgodset also keeping two clean sheets, it was a profitable double gameweek for anyone who went big at the back.

In last week’s article, Simen Wangberg and Lars-Christopher Vilsvik, our two defensive picks returned a handy 27 points between them — although ignoring the underlying stats and going with Valsvik over Vilsvik would have left us nine points better off. All three of our strikers returned at least six points, while Stefano Vecchia produced a fifteen-point haul (his third in the last five matches) at home to Mjøndalen. Our team returned a total of 80 points, well ahead of the gameweek average of 45.

With all the scheduled double and blank gameweeks behind us, we’re now into the final stretch of the season. Every Eliteserien team has ten games remaining, and the title race is still too close to call. Defending champions Bodø/Glimt have opened up a narrow lead, three points ahead of pre-season title favourites Molde. Rosenborg, meanwhile, have won seven of their last eight games to put themselves firmly in contention.

At the other end of the table, Brann climbed out of the relegation places for the first time all season after an impressive win over Kristiansund. Stabæk and Mjøndalen are now the two teams anxiously contemplating a season in Division One, and Brann face them both over the next couple of gameweeks.

If you loaded your team with Stabæk and Strømsgodset assets for the double, it’s worth noting that both sides have tough fixtures this week. GW21 could provide a good opportunity to use the second wildcard —  focusing mainly on the teams involved in the title race. The best weeks to play the Rich Uncle and Two Captain chips have probably passed already: if you still have those, the ideal strategy is probably to hold until the end of the season in the hope that Norway’s notoriously inclement autumn weather leads to one or two postponements and an extra double gameweek.

An unfortunate injury to national team keeper André Hansen has opened a relatively cheap route into one of the league’s stronger defences. Understudy Julian Faye Lund (5.0M) has said he wants to be Rosenborg’s number one next season, and now he finally has a chance to show he has exactly what it takes to be Hansen’s long-term replacement. He’s currently owned by just 0.4% of Eliteserien fantasy teams. Opponents Kristiansund have failed to score in any of their last four games against Rosenborg.

Despite a hard-fought European draw on Thursday evening, Bodø/Glimt are unlikely to rest key players ahead of the international break. They’re pushing to extend their narrow lead at the top of the table, and Fredrik Andre Bjørkan (6.2M) is a key man at both ends of the pitch. His underlying stats suggest he’s been unlucky to record only four assists so far this season; even without attacking returns, he secured three bonus points last gameweek.

With Normann Hansen missing through injury, Sandefjord looked toothless in attack last week. Opponents Viking are pushing for a European place, and Viljar Vevatne (4.7M) has started every game but one this season at the heart of their defence. He scored three times last season, indicating his consistent attacking threat from set-pieces.

Mjøndalen host Brann in a relegation six-pointer this week, and a glance at their head-to-head record suggests only one result is likely. Since returning to the top tier in 2015, Mjøndalen haven’t lost a single game against Brann, winning each of their last four at home. Nikolas Walstad (4.5M) offers a cheap route into their defence, and scored in the reverse fixture.

Molde’s Ola Brynhildsen (7.8M) has now started each of the last five games, and remains their highest-scoring midfielder in Fantasy Eliteserien. A win away at Odd this week will be crucial if they’re to have any chance of narrowing the gap to Glimt at the top of the table.

Stefano Vecchia (9.4M) is the most in-form player in Eliteserien right now, and a crucial part of Rosenborg’s title challenge. In his last five games, he’s returned an astonishing 53 fantasy points (despite only starting in four of them).

The precocious Harald Nilsen Tangen (4.8M) is an exciting budget pick this week. The Norwegian under-19 international has won a regular place in the Viking first eleven on the strength of his performances this season, and faces a Sandefjord side with only one away clean sheet all season.

Only one player in the league has a higher xGI number than Viking’s Veton Berisha (10.5M). Berisha is hitting top form again after returning from injury: he has three goals and an assist from his last three games, and is our pick for the captain’s armband against Sandefjord.

That one player is, of course, top scorer Ohi. As always, he’s a strong pick this week, but after four consecutive away blanks we’re choosing to leave him out in favour of Zdeněk Ondrášek (7.3M). The Tromsø striker is back in training again after missing last week with a rib injury. He faces a Haugesund defence that have now gone eleven consecutive games without a clean sheet.

Thomas Lehne Olsen (9.7M) takes the final place in our attack. He has five goals in his last four games, and his last away blank came way back in GW6. Opponents Sarpsborg conceded five against Strømsgodset last week.

Fantasy Eliteserien Team of the Week for Gameweek 21 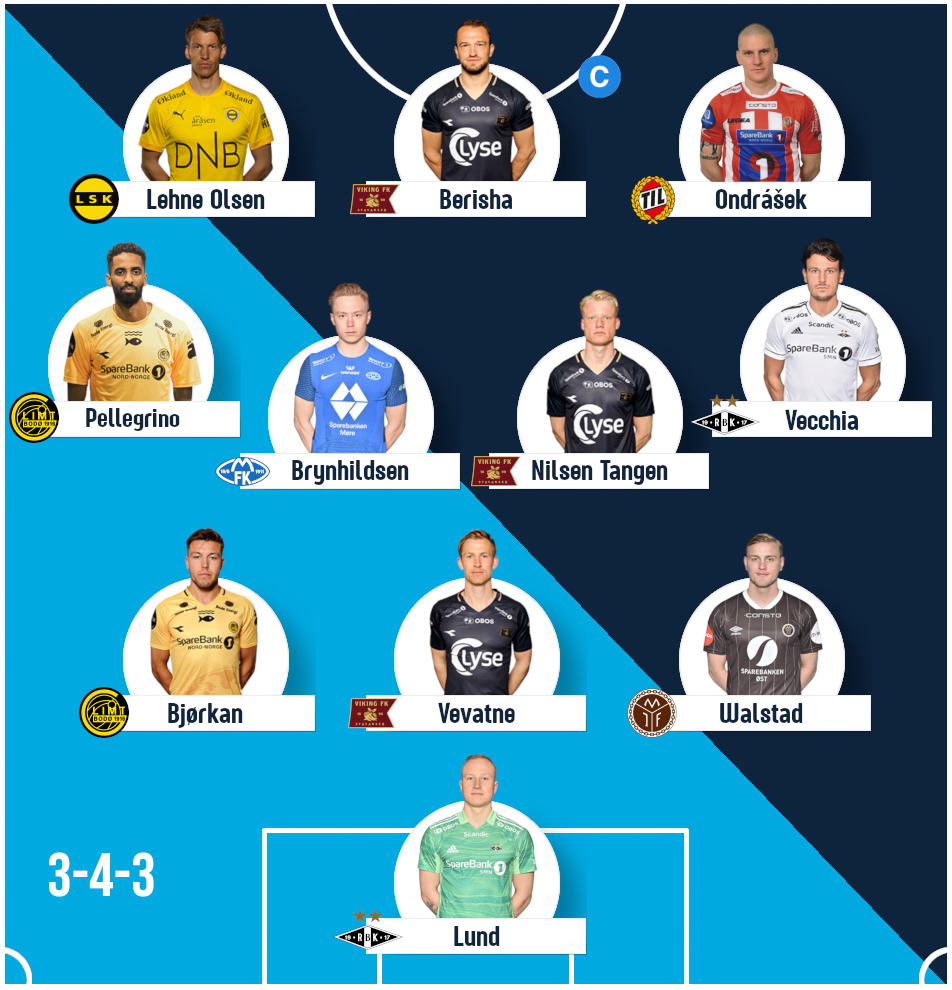