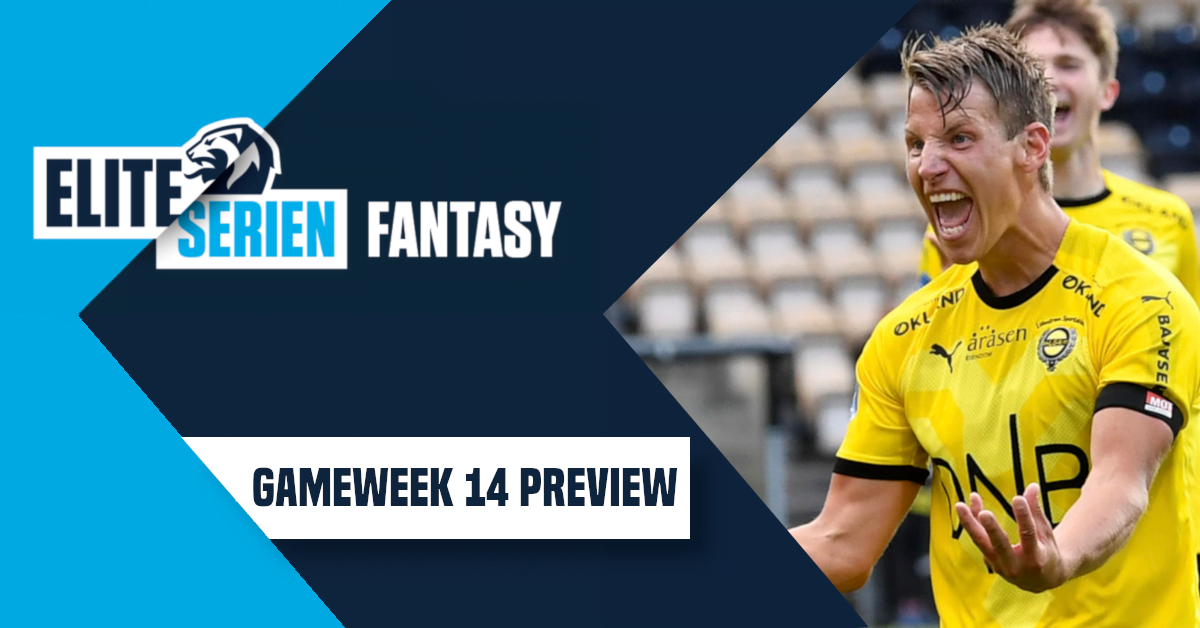 We’re not all going on a summer holiday: over the next couple of weeks in the Norwegian top division and Fantasy Eliteserien, some of the big guns (this is the Norwegian league, so “big guns” is relative) get an extended break while a group of midtable teams play twice. The result is a confusing mix of blank gameweeks, single gameweeks and double gameweeks.

The summer transfer window adds an extra layer of difficulty, as the annual ritual of Eliteserien’s star players queuing up to force a move to sunnier climes begins. Here are a few tips on navigating one of the toughest periods of the Eliteserien fantasy season.

First, it’s worth an at-a-glance guide to how many times each team will be playing:

Of the single gameweek teams, league leaders Molde (at home to Haugesund) and European challengers Odd (at home to Sandefjord) shouldn’t be ignored.

Egil Selvik (Haugesund, 5.3M) has the second-highest points total while sitting in under 10% of teams at the time of writing, and has recovered from the eye injury that saw him miss out against Vålerenga the last gameweek. Second-choice keeper Frank Stople (just 4.0M) was briefly looking like a must-own for the double gameweek, but now he’s almost certain to be back on the bench again.

Instead, the best option this week is perhaps Sosha Makani (Mjøndalen, 5.0M). Mjøndalen managed to lose a clean sheet to the final kick of the game not once but twice in the last round. Having one of the best defensive records in the league hasn’t yet translated into many fantasy points, but Makani already has a penalty save and is an excellent shot-stopper.

Sandefjord’s Jacob Storevik (4.9M, owned by 12%) is a solid option. Sandefjord’s home record is promising (three clean sheets in the last four) and a game against Lillestrøm offers some hope of another shutout.

Kristiansund’s Sean McDermott (5.5M) is probably the best keeper in Eliteserien, and by far the most popular fantasy pick, but a tricky away game against Viking is unlikely to bring many points this round.

The top two picks in the game, Borchgrevink and Bjørkan, both blank in GW14, meaning there’s a good opportunity to clamber up the overall rankings with a few DGW differentials.

Lillestrøm’s marauding Lars Ranger (4.5M) has scored in two of the last three games and picked up a couple of bonus points, although it’s worth noting that he’s just one yellow card away from suspension. Centre-back Igoh Ogbu (4.7M) is a nailed-on alternative from the same defence.

Sandefjord also have a great prospect at wing-back: Brice Wembangomo sets you back just 4.5M and is only in 4% of teams right now. Martin Kreuzriegler (4.4M) is an even cheaper option from the same team.

Haugesund’s attack-minded Mikkel Desler (6.2M) was a popular pick for the doubles, before jumping on the first available flight to Toulouse. Alexander Stølås has struggled with injury over the last couple of seasons but is one of the best defenders in Eliteserien and perhaps worth a punt at 6.3M in Desler’s absence.

Looking at the other double gameweek teams, Sarpsborg captain Joachim Thomassen (5.6M) and Mjøndalen’s Sondre Solholm Johansen (5.0M) both stand out. Stabæk have the worst defence in the league and are probably best avoided.

Let’s start with a quick raid on the bargain basement: the double gameweek teams provide some great value in midfield. Kristoffer Normann Hansen (Sandefjord, 6.0M) is the most widely-owned DGW pick and returned from a short-term injury with an assist in the last round. His teammate Vidar Ari Jónsson (5.2M) has similar stats, but much lower ownership. Don’t expect that to last too long…

Stabæk’s sixteen-year-old superstar Antonio Nusa (4.7M) is one of the most exciting players in the league at the moment, inviting comparisons to Martin Ødegaard (in the sense that he’ll tear up the Eliteserien as a teenager, rather than have an underwhelming loan spell at Arsenal). Oliver Edvardsen (7.0M) is a more experienced (and more expensive) option to cash in on two relatively good fixtures for Stabæk.

The leading mid-priced options are Haugesund’s Kristoffer Velde (8.7M) and Lillestrøm’s Gjermund Åsen (8.1M). Both are more likely to provide assists and bonus points than goals. Sarpsborg’s Nicolai Næss is in some teams as a cheap enabler (4.4M), but has a grand total of zero attacking returns so far this season.

First up, it’s worth noting that the three most popular picks in the game all have decent home fixtures. Even though none of them has a double, neglecting Ohi Omoijuanfo (Molde, 12.2M), Mushaga Bakenga (Odd, 9.9M) or Veton Berisha (Viking, 10.5M) could backfire.

Ohi seems the best pick of the three. Bakenga stretched a hamstring while scoring a penalty in GW13: he’s an injury doubt for the next round, and he’s also pushing for a move away from Odd. Berisha is up against a reasonably tight defence and Viking haven’t won any of their last four.

Of the forwards with a double gameweek, Lillestrøm’s Thomas Lehne Olsen (9.2M) stands out. He’s only blanked in four of his eleven games this season and has more bonus points than anyone in the game except Ohi and Bakenga. Expect him to be the most popular captain choice for the active teams this round.

If you’re looking for a differential, Haugesund’s Ibrahima Wadji (7.9M) seems to be hitting form and is owned by under 5%.

Eliteserien Fantasy Team of the Week for Gameweek 14 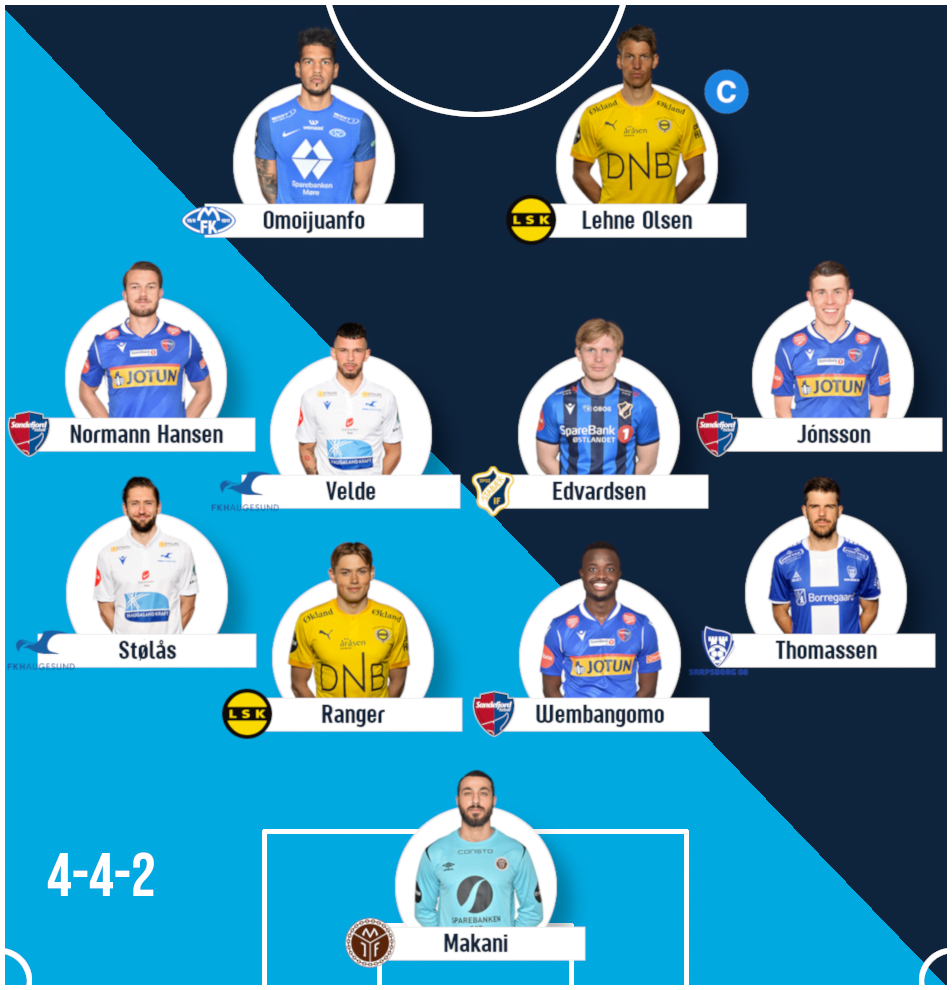