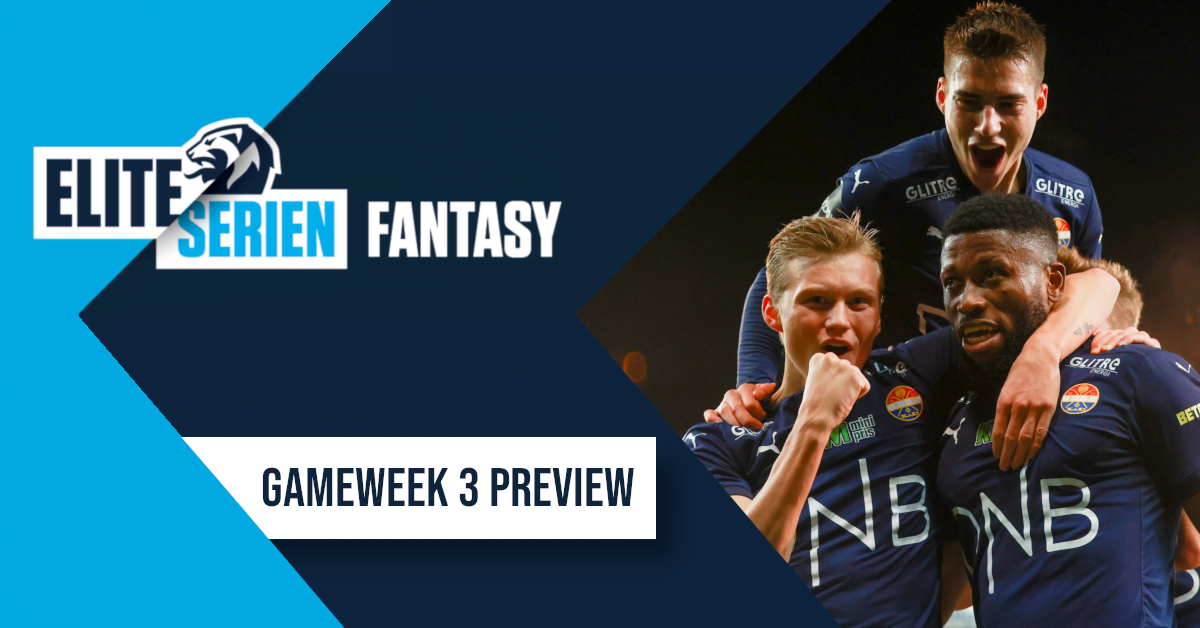 Targeting attackers playing against Haugesund has been a rewarding strategy so far in Fantasy Eliteserien, and tipster Jacob Silkstone is betting on that by trusting Strømsgodset’s Fred Friday with the captain’s armband in his team of the week for gameweek 3.

Maybe Fantasy Eliteserien managers have been spoilt by the incredibly consistent returns from the likes of Ohi, Lehne Olsen, Zinckernagel, and Juncker (together with just about every other regular starter in the Bodø/Glimt attack) over the past couple of seasons. Returns from the big-name players haven’t really been forthcoming yet this year, with only Linnes, Tripic, and Helland hauling in both gameweeks. All three started with an ownership of under 10%, although several of their teammates (Haugen, Brynhildsen, Berisha, Dragsnes) were among the most-owned players ahead of Gameweek One. For most of us so far, it’s been a case of having mostly the wrong players from mostly the right teams.

Our GW2 Team of the Week didn’t exactly cover themselves in glory, although a goal from Mucolli, maximum bonus for Sahraoui, and clean sheets for Dragsnes and Pattynama meant we at least ended with a gameweek score close to the global average.

As stubborn as this might sound, it probably isn’t time to lose faith in the popular picks just yet. I’d still expect Haugen’s attacking output to catch up with Linnes’ over the next few weeks, and Berisha to start outscoring Tripic. At the same time, it’s often hard to avoid the temptation (and the resulting price rises) of jumping on an early season bandwagon. Lillestrøm are especially interesting, with a Double Gameweek pencilled in for GW4 (home games against struggling Haugesund and Aalesund), but their next game is a trip to Molde, and it’s always worth remembering Helland’s injury record. With that in mind, I’d recommend Gjermund Åsen (slightly more expensive at 9.0M, and apparently not owned by the man in the stands giving out bonus points) as a safer pick.

Aalesund are the other team with a double coming up in GW4, and Sigurd Haugen (7.5M) remains possibly their best fantasy asset, despite not registering a goal or an assist in either of the opening two games. Experienced keeper Sten Grytebust (5.0M) picked up a clean sheet in GW1 and maximum bonus points in GW2, and the save points should keep coming even if the clean sheets don’t. Aalesund’s GW3 fixture is a favourable home tie against Tromsø.

HamKam’s Nicholas Hagen (4.5M) is, by a considerable distance, the most popular goalkeeper in the game. He’s been slightly disappointing so far, but he does have seven saves already (joint third-most in the league) and a good fixture at home to Sandefjord. HamKam’s promotion campaign was built on a strong defence, and Hagen’s owners shouldn’t give up on him just yet…

One of the picks we’re prepared to be stubborn about is Molde’s wing-back Kristoffer Haugen (still 7.5M). Haugen has been comprehensively outscored by team-mate Martin Linnes in the opening weeks, but – having been rotated last time out – he should be primed for a start and possible attacking points at home to Lillestrøm.

Kristiansund have had a poor start to the season, losing both of their opening games against opponents they’d have been expected to beat, but a game against newly-promoted Jerv offers a welcome opportunity to get back on track. Snorre Strand Nilsen (6.0M) is owned by nearly a quarter of teams overall, and deserves a last chance to bring in the points this week.

Aalesund have been unexpectedly parsimonious in defence, keeping a clean sheet against Kristiansund and conceding just once away at Viking. The quality of keeper Sten Grytebust is a key factor in their success, but Simen Rafn (4.5M) gives us a cheaper route into the starting eleven. It’s also worth noting that Rafn has scored in all of his three Eliteserien campaigns, and provided a total of eleven assists.

Having backed the wrong Viking attacker last week, we’re unashamedly jumping on the Zlatko Tripic bandwagon (priced at 9.6M, but not for much longer). Tripic has two double-figure hauls so far, and is a big favourite with the ‘man in the stands’ bonus point system (five bonus points and counting).

Despite a disappointing blank last week, Hugo Vetlesen (8.5M) remains our preferred route into the Bodø/Glimt midfield, with several injury doubts hanging over the team after a deflating 4-0 defeat in Rome on Thursday. Vetlesen averaged just over one attacking return per 90 minutes last season, and remains one of the best mid-priced midfielders in the game.

Kristian Eriksen (7.1M) (almost Christian Eriksen, but not quite…) is currently the second most popular pick in the game, and rewarded his owners with a goal, an assist, and maximum bonus points on the opening day of the season. After a blank last week, he’ll expect to thrive in front of his home crowd again this time.

Down in the bargain basement, Kristiansund’s Amidou Diop (4.5M) has taken more shots so far this season than any other player except Ola Brynhildsen (let’s temporarily ignore the fact that none of these shots has gone in). His next two games are against newly-promoted sides, Jerv and HamKam.

Targetting whichever striker is playing against Haugesund has been a hugely successful strategy so far, with Ruud Tveter and Kjartansson scoring five goals between them. Strømsgodset’s Fred Friday (8.0M) is up next. He has a goal to his name already this season, and bonus points from both of his opening two games. In the hope of another Haugesund defensive nightmare, Friday takes the captain’s armband for our team.

As mentioned above, Sigurd Haugen (7.5M) remains the best pick from Aalesund’s attack, despite opening the season with a couple of blanks. The chances have been coming, and he scored more than any other player in pre-season. Bring him in this week with a view to holding him for DGW4.

Finally, we’ve left a premium slot open for Veton Berisha (12.0M). In some ways, Berisha feels like a very conservative pick this week, there more to cover his ownership than in any expectation of a season-defining haul away against Odd. Still, he’s had plenty of big chances in his opening two games, and we’re not quite courageous enough to go without him this gameweek. 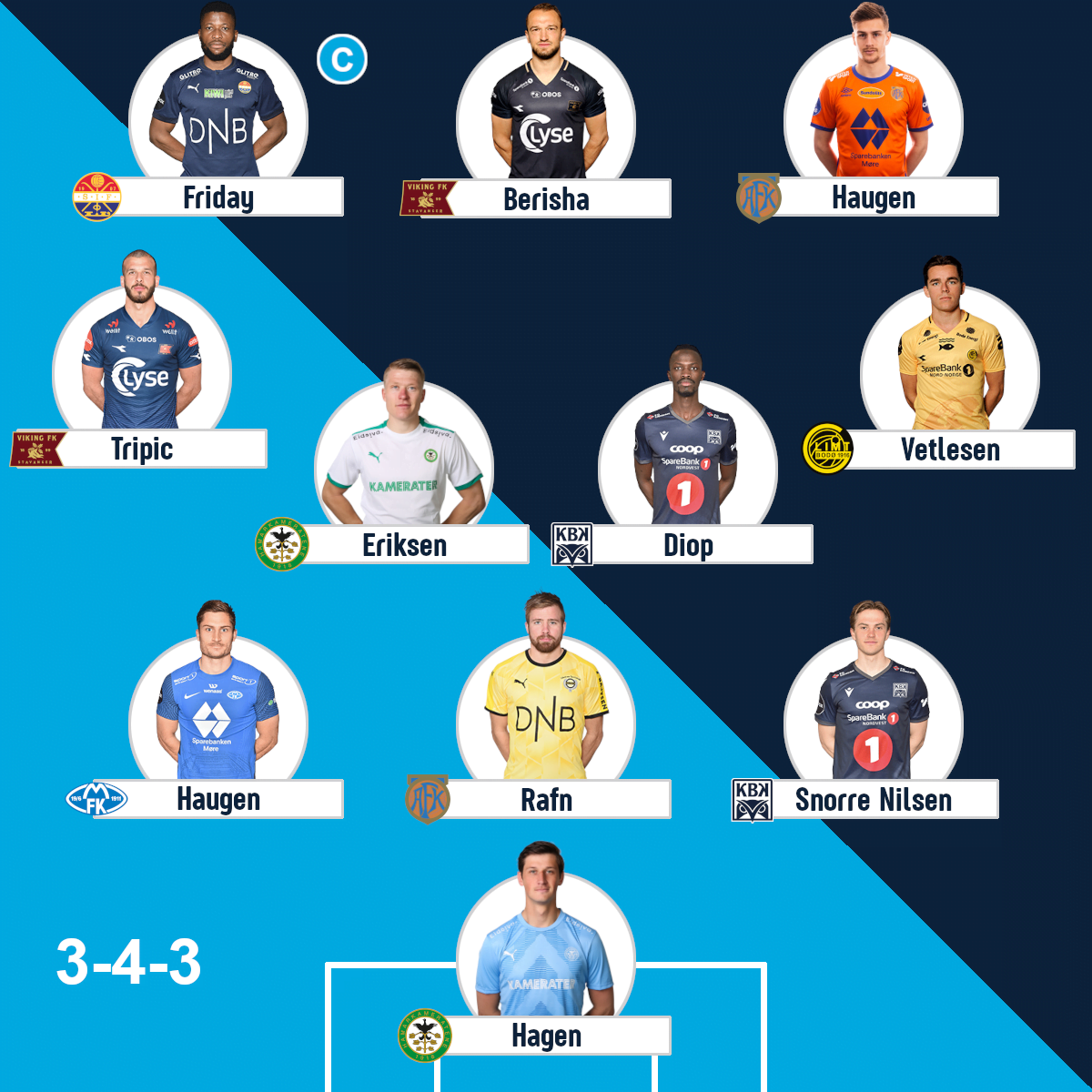