Lillestrøm SK’s Gjermund Åsen leads the race for the most goals created with five assists to his name already and with two games at home against Aalesunds FK and FK Haugesund, is tipster Jacob Silkstone’s choice for the captain’s armband in gameweek 4 of Fantasy Eliteserien.

The curse of Fred Friday struck our Team Of The Week yet again: the Strømsgodset striker has a history of blanking each and every time we trust him with the captain’s armband, and last week was no exception. Strømsgodset controlled the game against early relegation favourites Haugesund, but Friday stayed disappointingly quiet. His replacement, Lars-Jørgen Salvesen, scored the decisive goal only a few minutes after coming on. Looking ahead, we’re expecting Salvesen to pose a serious threat to Friday’s starting spot.

Thankfully, our other picks were more successful. Hugo Vetlesen and Sigurd Haugen contributed almost half of our total score, with 31 points out of 63 (comfortably above the overall average of 48). Molde wing-back Kristoffer Haugen also chipped in with a goal (justifying our prediction by finally outscoring teammate Martin Linnes), while HamKam’s Nicholas Hagen kept his first clean sheet of the season.  Viking’s Zlatko Tripic somehow managed to blank despite registering one of the most statistically dominant performances of the season, but he did get a bonus point for his efforts – meaning that he’s now registered at least one bonus in each of the three opening games.

Anyone also playing FPL will need no reminders about the soaring expectations that accompany each double gameweek, quickly followed by the steep plummet back to reality when your Watford striker (naming no names) gets sent off midway through the first match. As Salah proved in FPL this week, sometimes it’s best to stick with the single gameweek stars; as Kane proved, sometimes it’s best to sell them and get on that DGW bandwagon…

Four Eliteserien teams have a Double Gameweek in GW4: Lillestrøm play twice at home, while Aalesund play twice away. At the last minute, Viking threw a spanner in the works by confirming that their game against Haugesund has been rescheduled; that fixture has also been added to GW4, giving both teams a double as well.

Even with the new additions, Lillestrøm still have the most enticing set of fixtures. They currently sit second in the table and most fantasy managers will be tempted to captain one of their players over the likes of Berisha and Tripic.

The overall dream team currently has three representatives from Lillestrøm: defender Igoh Ogbu (5.1M, but expect another price rise soon) is the highest-scoring player in the entire game right now, despite registering 0 points from the opening gameweek. He’s the cheapest nailed-on starter in the Lillestrøm backline, and a major threat from set-pieces. A word of warning, though: he had three goals in his entire senior career before this season, so don’t expect his current run to continue…

Pål André Helland (8.2M) is probably Lillestrøm’s best player, and also their most injury-prone. Having both games at home makes it marginally more likely that he gets significant minutes: he’s a risky pick with a huge upside. The safer choice is his midfield partner Gjermund Åsen (9.1M). The former Rosenborg player has five assists in three games so far (including one extremely dubious effort against Molde) and is an integral part of the Lillestrøm attack.

Finally, Vetle Winger Dragsnes (5.5M) was by a distance the most popular Lillestrøm pick in pre-season, before being shunted to left centre-back. It’s likely that he’ll be returning to a more familiar wing-back role in at least one of the games this week, which makes him a tempting alternative to Ogbu. Eskil Edh (5.6M) and Lars Ranger (5.5M) are the other likely starters in the wing-back positions, with slightly higher rotation risk than Dragsnes but plenty of potential to haul.

Aalesund have a trickier set of fixtures, away to both Lillestrøm and Odd. Sigurd Haugen (7.5M) sparked into life with a brace against Tromsø last week and remains the safest route into the Aalesund attack, with Simen Bolkan Nordli (7.6M) probably the best alternative choice for anyone wanting a differential.

At the back, don’t expect any clean sheets but do expect a few save points for Sten Grytebust (5.0M).

Of the Viking players, Veton Berisha (12.0M) and Zlatko Tripic (9.6M) are both close to essential status at the moment. Intriguingly, they played up front together in the cup game in midweek; if Tripic continues to start further forward, he becomes by far the better pick of the two.

Shayne Pattynama (5.5M) is the most appealing route into the defence, now he has secured a regular starting berth.

As for Haugesund, few managers will be tearing up their long-term plans to accommodate any of their players. On a rich uncle chip, Christos Zafeiris (5.4M) is worth a look as his team’s main creative outlet. Goalkeeper Egil Selvik (5.5M) has the potential to rack up the save points, but looks overpriced by half a million or so. Alioune Ndour (8.0M) is also an interesting differential, but only if your rich uncle is committed to bankrolling the team this week…

As mentioned above, former national team keeper Sten Grytebust (5.0M) isn’t the most likely candidate for a clean sheet this week, but he’s still a strong differential pick. With nine saves and four bonus points from the first three gameweeks, he’s been one of the standout players for Aalesund. Facing two tough opponents who are likely to dominate possession should lead to plenty of saves.

At first glance, Leonard Zuta (5.5M) seems like an odd pick. He has just three points in total from the opening three gameweeks, and sits in 2% of teams overall. However, newcomers Jerv have overperformed in winning two games so far, and a crushing 4-0 defeat away against Lillestrøm might be closer to a true indication of what to expect when they travel to face Vålerenga this week. Zuta is possibly the most exciting route into the Vålerenga defence, with slightly more attacking potential than his teammates.

Lars-Christopher Vilsvik (5.0M) continues to be one of the more frustrating picks in Fantasy Eliteserien. Statistically, he often looks to be head and shoulders above the rest of the Strømsgodset defence, but his hauls are few and far between. A home game against Sandefjord, who were blown away by HamKam last week, seems a good chance to restore our faith in him.

Even with the late Viking announcement, expect Gjermund Åsen (9.1M) to be among the most popular captain picks among the leading fantasy managers this week. His assist potential and his centrality to Lillestrøm’s attack make him close to an automatic choice ahead of the double home fixtures. He’s the captain for our selection this week.

It’s becoming clear that Hugo Vetlesen (now 8.6M) is the most underpriced player in the game this season. He continues to average more than one attacking return per 90 minutes, and Bodø/Glimt have shown that they’re capable of a dominant performance against any domestic opponents. Viking might be a tougher test than most, but it’s overwhelmingly likely that the league leaders manage to score again this gameweek. Snap Vetlesen up and enjoy the price rises.

We were prepared to overlook Zlatko Tripic (9.6M) in favour of a Vålerenga punt until the late double gameweek announcement. With a fixture at home to Haugesund now added, Tripic becomes impossible to ignore. His key passes stats are off the charts compared to the rest of the league, and he’s also a major goal threat. The fact that he started in a front two in midweek only adds to his appeal.

Strømsgodset’s Herman Stengel (5.9M) has had a disappointing start to the season, registering just a solitary clean sheet point so far. Sandefjord struggled to defend set pieces against HamKam last week, and Stengel’s creative abilities make him a reasonable punt this time around.

Sakarias Opsahl (5.6M) is looking well set for a breakthrough season at Tromsø. He has two goals, an assist and five bonus points to his name so far, and the underlying numbers suggest his early hauls have been fully deserved.

Plans to punt on a Lillestrøm striker had to be shelved at the last minute, with Veton Berisha (12.0M) now set for a double gameweek. Bodø/Glimt’s defence should be tough to break down; Haugesund’s really shouldn’t be. This could be the right week for the two captains chip, with Åsen alongside either Berisha or Tripic.

Finally, Sigurd Haugen (7.5M) is our route into Aalesund’s attack once again. If you’re looking for an alternative to captaining a Lillestrøm player, he could well be the standout option. 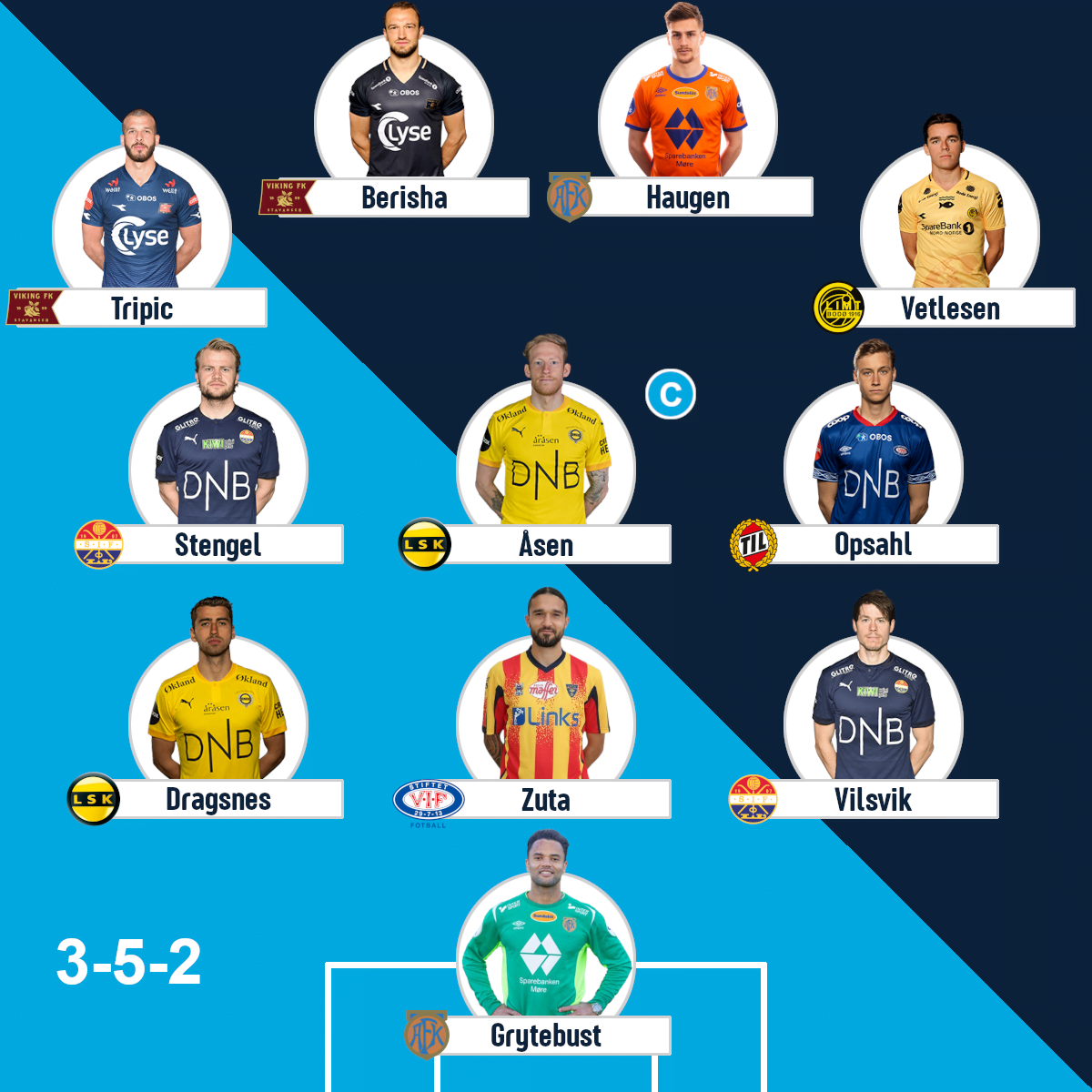