Fantasy Bundesliga: Template Team for the Start of the Season 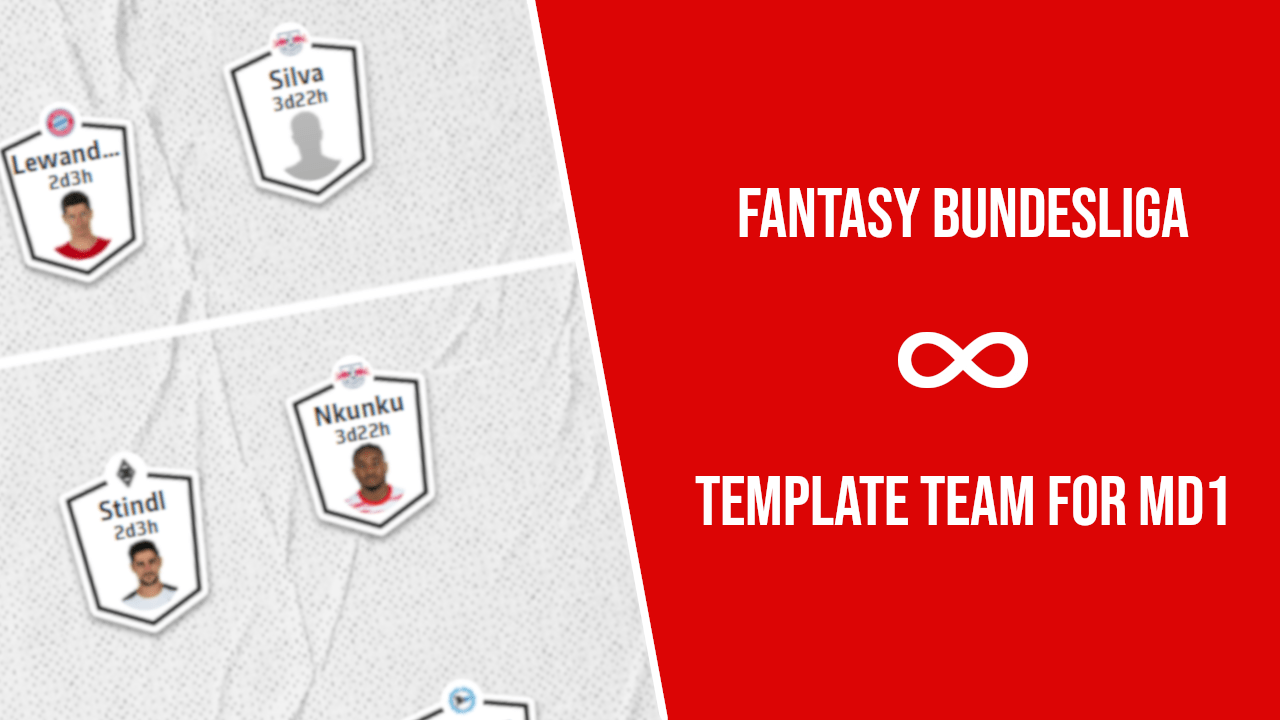 The beginning of the Fantasy Bundesliga season is getting closer by the day and Managers have already started discussions on which players are must-haves for the upcoming season and what is the template XI for the start of the season. We review the same in this article.

At the start of every season, there is a debate about whether Lewandowski is essential or not and the answer is always a yes. Lewandowski has won the “Torjägerkanone” aka the Bundesliga golden boot for the past four consecutive seasons and while he might be growing older, he is ageing like fine wine. There is no bigger testament to that than his performance last season where he broke Gerd Müller’s record of most goals scored in a single Bundesliga season on the last kick of the campaign to finish on a tally of 41 goals. Lewandowski is the only player to have crossed the milestone of 400+ points in each of the last two seasons and with an ownership percentage of 72%, the phrase “It is better to be safe than sorry” fits perfectly over here.

The player with the second-highest goals as well as points last season (374) after Lewandowski (463), Silva made the big jump from Frankfurt to runners up RB Leipzig this window for a meagre fee of 23M for someone who scored 28 goals last campaign. Those numbers would win him the golden boot in 15 out of the last 20 Bundesliga seasons and even though he will be missing Filip Kostić with whom he established a formidable duo, an even more star-studded cast awaits him in Leipzig with players such as Nkunku, Szoboszlai, Olmo and Forsberg to support him as the focal point in attack. It is undeniable that he is the most important forward in the game after Lewandowski with opening fixtures against Covid hit Mainz and Stuttgart within the first three weeks.

The 21-year-old Norwegian wonder-kid had the most productive season of his career last season with 27 goals and 6 assists in just 28 games but even the departure of Jadon Sancho to Manchester United has left the faith of Fantasy Managers unwavering with the striker still being the highest owned player in the game along with Lewandowski. If the absence of Sancho raises concerns about Haaland’s ability to score then it is worth noting that Haaland had 10 goals and 2 assists in the first 8 games in the previous campaign and only two of them were assisted by Sancho who was struggling for form at the start of the season and only had three assists in the same period. Haaland’s natural goal-scoring talent isn’t questionable and doubt him at your own risk with games against Freiburg and Hoffenheim – two teams known for conceding lots of shots – within the first three matchdays.

You can hardly go wrong with a frontline of the three top goal scorers from last season – Lewandowski, Silva and Haaland. Even though there are other options as well that might have more favourable fixtures and a better ceiling.

There is a huge shadow of doubt on whether he will stay with Frankfurt with Lazio seriously interested in the Serbian winger. However, if he does end up staying, there is no doubt that he will finish the season as one of the highest-scoring midfielders again as he is the most fixture proof player after Robert Lewandowski. Kostić had 4 goals and 14 assists in 30 games last season but his greatest quirk is that he has a large number of shots every game while also creating numerous chances which results in a generous amount of bonus points making Kostić the player with the highest floor in the game.

Borussia’s talismanic captain was a huge fan favourite among Fantasy Bundesliga Managers in 20/21 and this year there is an even bigger reason to cheer for him because he is expected to play Out of Position (OOP) as a striker under the new coach Adi Hütter for the season opener against Bayern Munich who are missing both full-backs and will be handing centre back Nianzou his first start for the club. It is yet to be seen if he will continue playing as a striker with the rest of the forwards either injured or out of form, but he still offers incredible value in fantasy as he is on all set-pieces including penalties and Stindl will still be a popular option even with games against Bayern and Leverkusen at the beginning.

Leipzig winger Christopher Nkunku is similar to Filip Kostić in more ways than one with the Frenchman also being a popular name in the Fantasy Bundesliga community as a high floor-high ceiling player that can be relied on week in, week out. He will be the go-to pick from the Bulls midfield with games against Mainz and Stuttgart to start the season but it will be interesting to see the effect Dominik Szoboszlai will have on him once he starts for RB Leipzig and also shares set-pieces with Nkunku.

With Raphaël Guerreiro a doubt due to injury, Sosa is the pick of the premium defenders along with Angeliño as he has a home game against newly-promoted side Greuther Fürth to start the season who have lost key players such as their best creator David Raum, best defender Paul Jaeckel and midfielder Sebastian Ernst for free just before the start of the season. If striker Saša Kalajdžić starts for the team on Matchday 1 then that makes Borna Sosa an even better prospect in Fantasy Bundesliga.

Even though his free-scoring form came to an end towards the later stages of the previous campaign as he had just two assists in his last 12 Bundesliga games, Angeliño is still the best defender from the Bulls especially now that Nagelsmann isn’t there to torment him. Games against Mainz who might be missing quite a few key players for the season opener and Stuttgart means that the wing-back who had four goals and four assists in 26 games in the last campaign has a great run to reignite his early season form from last year again.

Teammate Nordi Mukiele is also worth a mention as he costs 4M less and offers a similar attacking threat even though the number of right-backs in the squad means that he is prone to rotation.

If you are looking for that one budget gem to complete your team then Rousillon is the one. He might’ve lost his place to Otavio last year but has seemingly won the favour of new head coach Mark Van Bommel. Although there are some doubts about whether Wolfsburg will be as good defensively as they were last season, Rousillon is still a must-have at just 7M with Wolfsburg’s favourable run of fixtures at the start.

Fitting all the premium players in your squad might leave you strapped for cash but there is still some value to be found in defenders that are priced at 5M or below and Laursen is one of them. He might not be the most attacking defender there is but Laursen plays for the team that had the third-highest number of clean sheets in 20/21 with 11 and is the best defender you can buy at just 4M with his clean sheet potential until you build more team value.

It is no secret that the Stuttgart team is missing many key players such as Silas Katompa Mvumpa, Coulibaly, Mangala, Didavi, Führich and possibly even Kalajdžić. Many B team players are expected to fill in and with a squad that is far from full strength, it is expected that Stuttgart will concede a lot of shots even against weaker teams who will try to capitalize on the opportunity to secure three points. The club faces Greuther Fürth and RB Leipzig in their first two games, two teams that are known for taking a lot of shots and last season’s budget hero Florian Müller could be essential with two possible ceiling games at the beginning of the season.

Bench and other alternatives:

You can find Fantasy Bundesliga resources for the 21/22 season here.