Euro 2020 Fantasy Team of the Tournament 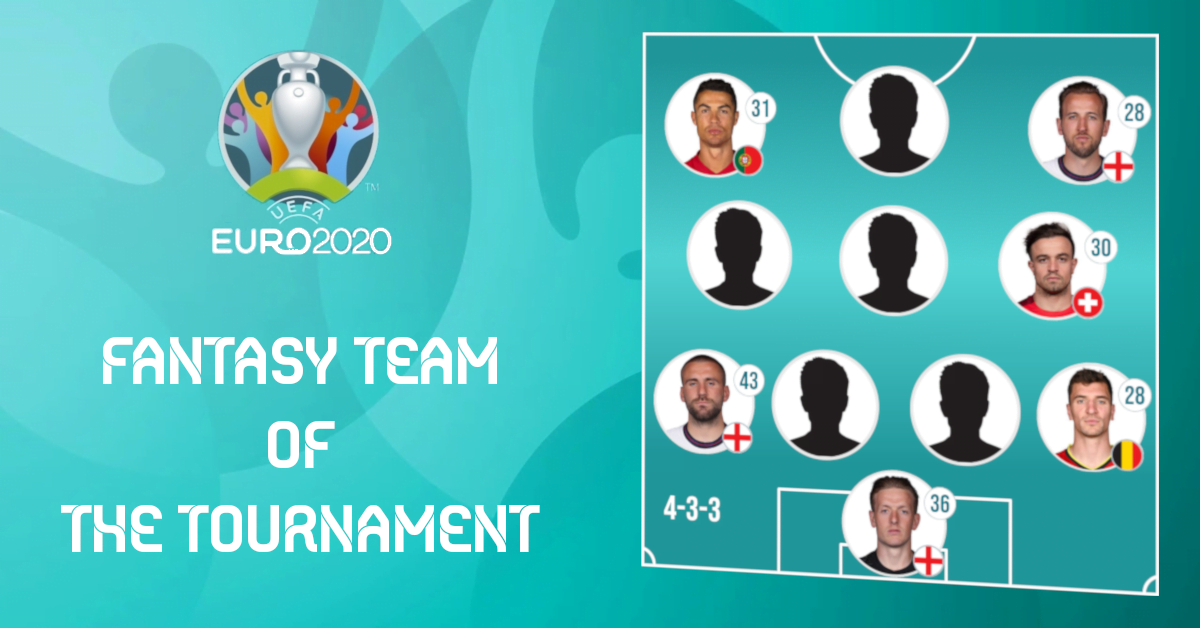 An exhilarating Euro 2020 tournament has come to an end, it was brilliant football all around with some marvellous performances such as Kevin De Bruyne’s individual heroics off the bench against Denmark and Italy’s massive team effort to snatch victory from the jaws of defeat against hosts England in the finals. The tournament had plenty of drama and many games came down to the penalty shootouts because there was nothing to separate the favourites and the underdogs who fought tooth and nail in hopes of securing footballing glory for their national sides.

Even if your team did not win the ultimate prize European football has to offer, we hope that you had a great tournament fantasy-wise and that you enjoyed our coverage for the competition. For our final article on the Euros, we will be looking at the Euro Fantasy team of the tournament. Thank you so much for the support and we will be back once the short break ends. Till then, take care and goodbye!

Schick is probably the most surprising inclusion in the team of the tournament as he came off a less than impressive season with Bayer Leverkusen in the Bundesliga but he proved his critics wrong and won the silver boot for his five goals in five games for the Czech Republic resulting in 33 points as he led his country to the quarter-finals where they lost to Denmark.

Ronaldo is another player that faced heavy criticism before the tournament began but the 36-year-old exhibited his class by scoring five goals and assisting one to win the Euro 2020 golden boot despite playing just four games against some of the toughest teams in the tournament. He even equalled Ali Daei’s record for the most international goals in men’s football with his 109th goal for Portugal but still couldn’t lead his team past the Round of 16 as the defending champions had to exit the tournament early after a 1-0 loss to the #1 ranked team in the world – Belgium.

Kane was touted as an early contender for the Euro golden boot and there was an expectation that he would add it to his already impressive resume that consists of the World Cup 2018 golden boot and three Premier League golden boots that he won with Tottenham Hotspur. He did not have the best start after failing to score in the group stages, however, but discovered some of his old form in the knockout phase, scoring four goals and finishing as the leading goal-scorer for runners-up England in the tournament.

Sterling’s inclusion to the XI against Croatia on matchday one was met by strong disapproval but he scored the winning goal in that game and was England’s standout player throughout the tournament registering three goals and an assist to his name. He filled in for Harry Kane in the group stages by scoring the only two goals England had in their first three matches and also scored the opening goal against Germany in the Round of 16. Sterling finished as the highest-scoring midfielder in fantasy with 39 points to his name.

Forsberg was Sweden’s most dangerous player throughout the tournament as they topped their group without losing a single game over favourites Spain in a bracket that also included the likes of Slovakia and Poland. He was a surprise contender for the golden boot with four goals to his name but his challenge for the top-scorer was cut short by a loss against Ukraine in the quarter-finals.

“The magic dwarf” put on a show in the Euros with his three goals and one assist in Switzerland’s journey to the quarter-finals that also included an upset win against world champions France. He was the ultimate differential midfielder in fantasy as he mostly went under the radar and put in his best performances in the tournament when it mattered the most, demonstrating his explosiveness on the big stage.

Few would’ve expected Shaw to be the highest-scoring player in fantasy for the tournament but he was absolutely brilliant and did not put a foot wrong even once. He blanked in just one of the six games that he played and was fantastic on both ends of the pitch registering a goal in the final and three assists overall to go along with his four clean sheets for 43 points. Shaw rests his case on why he is one of the best left-backs in the world and the comparisons to legendary Brazilian left-back Roberto Carlos make total sense. FPL managers will definitely be excited to own “Shawberto Carlos” in fantasy again as he is playing the best football he has played in his career so far.

John Stones was a rock at the back for England as they kept consecutive clean sheets in their first five games of the tournament, only conceding a free-kick in the semi-finals against Denmark and their first goal conceded from open play came in the finals versus Italy.

Mæhle was a real fan favourite during the Euros displaying incredible finesse and skill at times. He finished as the third highest-scoring defender in Euro Fantasy despite keeping just one clean sheet in the entire competition against Wales. Mæhle was part of a special Denmark team that despite losing their best player Eriksen, showed incredible grit and courage to make it to the semi-finals where they lost to England in AET.

Meunier was not even expected to be a mainstay in the Belgian starting XI, let alone secure a spot in the fantasy team of the tournament. Due to Castagne’s injury in the first 15 minutes on matchday one, Meunier was presented an opportunity to prove himself again after a disappointing campaign with Borussia Dortmund and he took the opportunity with both hands. He had a fantastic tournament, displaying glimpses of his old self at PSG and registered two goals and an assist to go along with two clean sheets against Russia and Portugal, finishing on 28 points along with Kyle Walker.

Pickford was part of the England team that conceded the least goals in the entire tournament with just two and was one of the best keepers throughout the tournament, making brilliant saves to go along with his clean record. There was no one else that deserved the golden glove award more than Pickford but unfortunately, the Euros does not have one.

Fantasy Euro 2020 Team of the Tournament 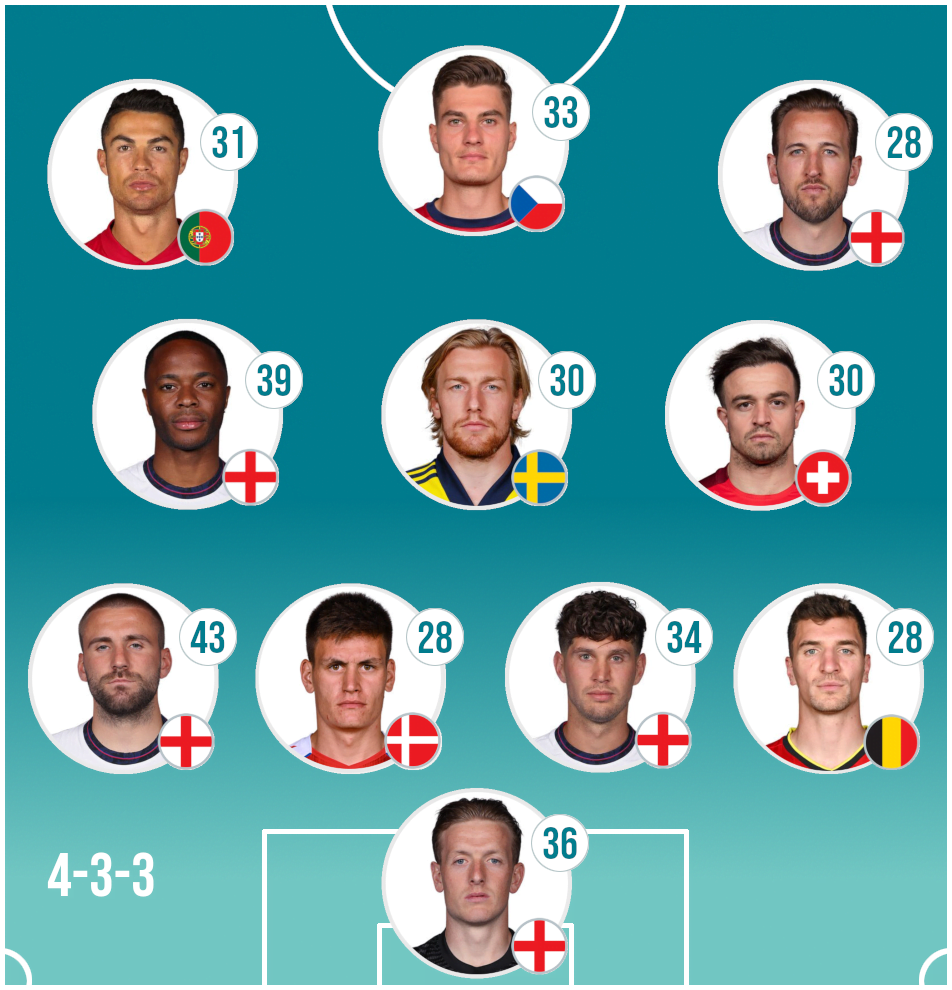