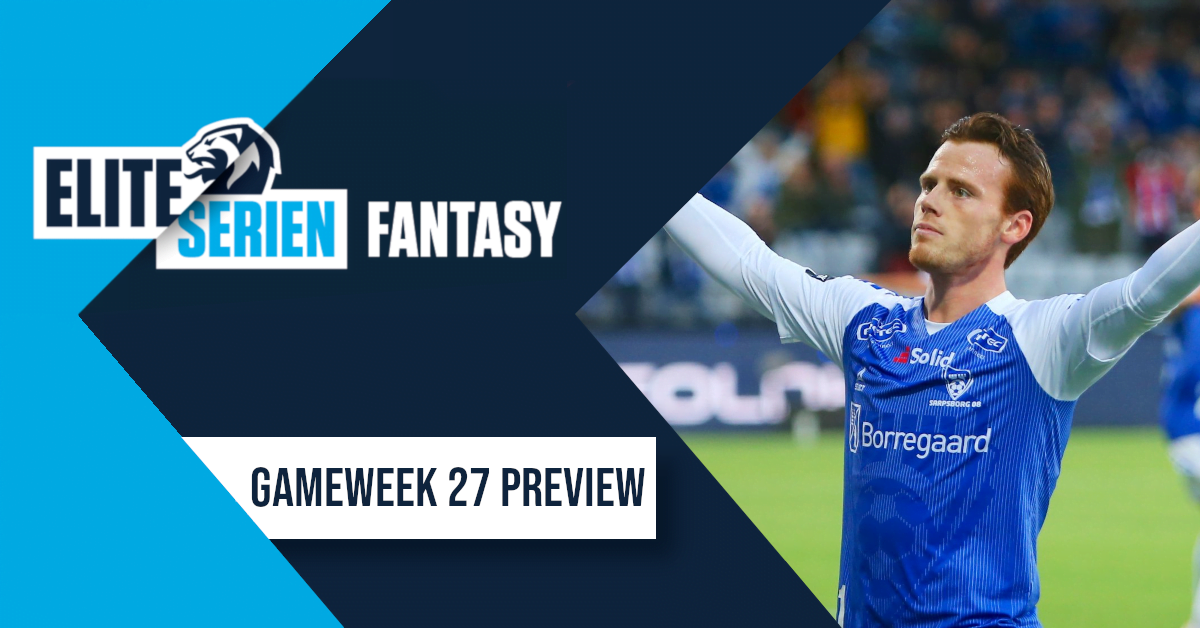 Tobias Heintz might’ve been inconsistent for Sarpsborg this season but he is turning the heat up in the last few games with nine goals and two assists in just his last 10 appearances. So it is no surprise that he is a part of Jacob Silkstone’s Eliteserien Fantasy TOTW for gameweek 27 with a match against Tromsø.

Putting our faith in a team with just two wins in their previous eleven matches, hovering just above the relegation zone. What could possibly go wrong? Perhaps surprisingly, investing in Aalesund for the double gameweek was at least a moderate success. Two of our key picks, Simen Rafn and Simen Bolkan Nordli, produced a total of 27 points between them. Rafn came away with two clean sheets and a bonus point, while Bolkan Nordli scored a superb free kick in a crucial game against Jerv. Unfortunately, double gameweek picks not named Simen performed far less impressively. Our captain pick, Moses Ebiye, missed a string of chances and then received a yellow card for kicking an opponent in the face (accidentally). With the popular single gameweek captaincy options all returning, faith in Moses proved damaging for us.

Our Tipsters Team of the Week finished on a respectable 74 points, with the overall average down at 56. We’ll be hoping to do slightly better with this week’s selection…

It was initially assumed that Lars Jendal (3.9M) came into the HamKam team only because first choice Nicholas Hagen had been away on international duty (the official fantasy game flagged Hagen with “jet lag”), but Jendal has made the spot his own with a string of competent performances between the posts. He’s the cheapest starting option in the game, and opponents Strømsgodset have drawn a blank in three of their last four away from home.

Vetle Winger Dragsnes (6.1M) is now owned by (at the time of writing) exactly 40% of teams overall, meaning 40% of managers were infuriated by Molde’s late breakaway goal in the dying seconds of last week’s game. Dragsnes came away with a solitary bonus point for his efforts, but it could have been so much more. Lillestrøm have been less impressive on the road, but he makes our selection for this week.

Statistically, Alfons Sampsted (5.9M) has been one of the unluckiest fantasy picks this season. His expected assist total is exactly on par with Martin Linnes’, but Linnes has five actual assists to Sampsted’s zero. He also outranks team-mate Hugo Vetlesen (seven actual assists). Can Sampsted finally deliver on those underlying numbers before the end of the season? Even if he can’t, he’s a reasonably-priced route into a strong Bodø/Glimt defence.

Turning our attention to the budget options, Torje Wichne (4.3M) makes his first appearance in our selection this season. Jerv have fought hard in recent weeks, and they have to get a result against Viking if they’re to have even the faintest hope of survival. Viking have lost three of their last four away games, while Wichne has two assists in his last four matches.

All hope of a title challenge has now evaporated for Bodø/Glimt, but Amahl Pellegrino (12.5M) has rediscovered his best form and will be the popular choice for the captaincy this week. Among all active players, he leads the league for expected goals and assists (and, more conveniently for fantasy points, actual goals, and assists) per 90 minutes. We’re not brave enough to ignore him for the captaincy at home to struggling Kristiansund.

We’re happy to double up on the Bodø/Glimt midfield, with Hugo Vetlesen (9.3M) joining Pellegrino. Vetlesen now has three consecutive double-digit hauls and his ownership almost exactly matches Pellegrino’s. He has slightly outperformed the underlying numbers, but looks like a key player to own again this week.

Tobias Heintz (8.1M) continued his incredible run of form with the winner against Viking last week. He now has three double-figure hauls in his last four, plus nine goals in his last nine matches. Opponents Tromsø haven’t kept a clean sheet away from home all season.

After delivering in the double gameweek, Simen Bolkan Nordli (7.4M) keeps his place in our selection as Aalesund prepare for a home game against Sandefjord. The visitors have five consecutive defeats on the road, and are sliding dangerously close to the relegation zone.

Sarpsborg’s Anton Saletros (6.6M) performs notably better at home. He has attacking returns from all of his last four home games, and eleven of his thirteen attacking contributions this season have been on his home turf. As mentioned above, the form book points to another Sarpsborg win this weekend, with Saletros likely to be involved.

Thomas Lehne Olsen (10.8M) hasn’t quite rediscovered his best form since rejoining Lillestrøm in the summer transfer window, but a brace away at Viking showed what he’s capable of. Owned by just 2.9% of teams at the moment, he can still be a key differential for Lillestrøm’s favourable final four fixtures.

Having disappointed thousands of teams in the double gameweek, it seems written in the stars that Moses Ebiye (7.4M) will finally deliver the points a week too late. Sandefjord aren’t the most defensively resolute opponents and Ebiye is certainly getting chances at the moment. The question is whether, this week, he can finish them…

Team of the Week Gameweek 27 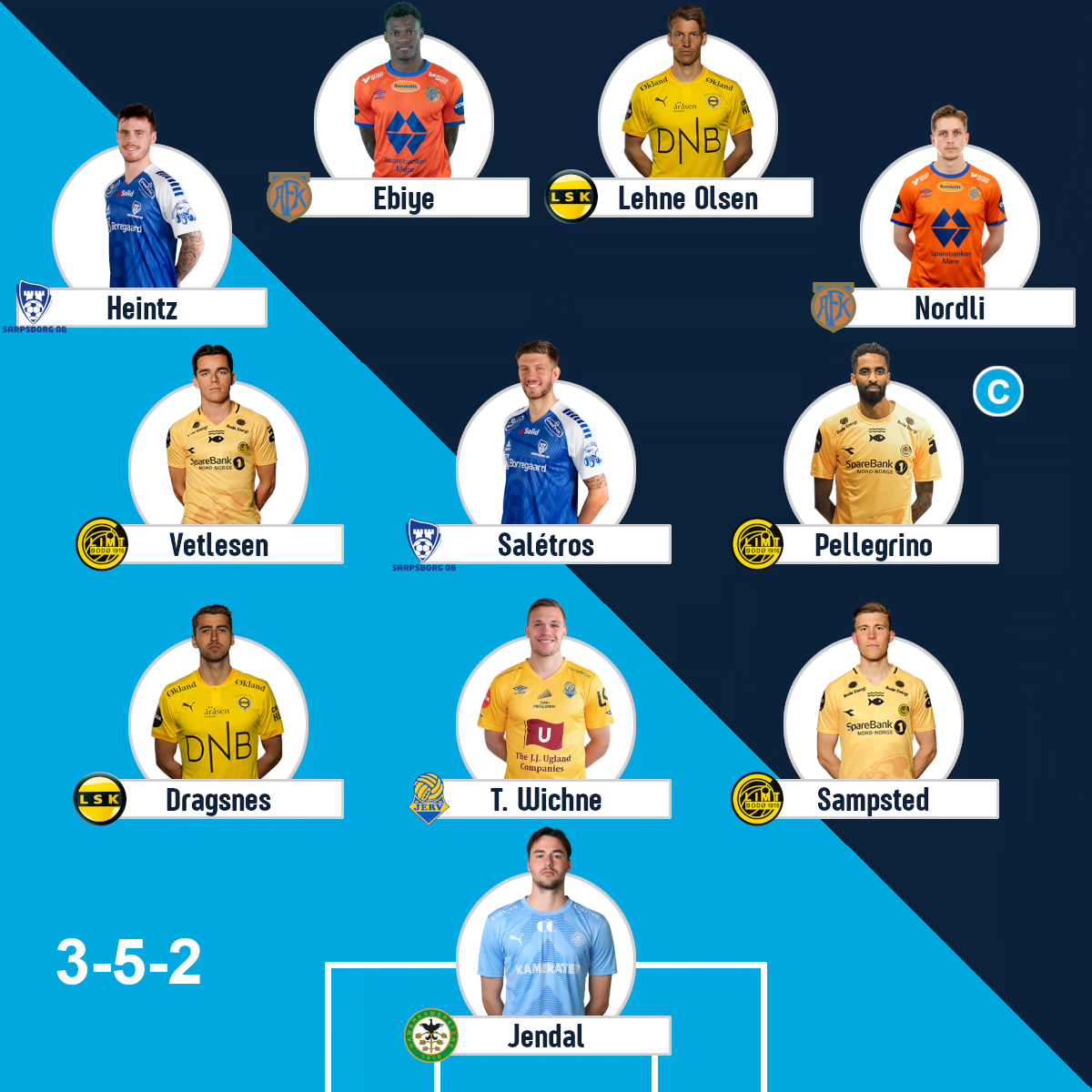