As we look forward to the final gameweek of the season, FK Bodø/Glimt’s Ole Solbakken also bids farewell to the team as he will be moving to Roma, and tipster Jacob Silkstone believes he could be a great differential in his final game in our Eliteserien Fantasy preview for gameweek 30.

Welcome to the final Eliteserien Fantasy preview of the season. Unfortunately, our Tipsters selection has been wheezing its way toward the finish line in recent weeks – the fantasy equivalent of the London marathon runner who infamously got stuck while trying to finish the race in a Big Ben costume. Captain Amahl Pellegrino delivered a double-digit haul last week, but no bonus points hurt as his teammate Hugo Vetlesen comfortably outscored him. Our punt on Ole Christian Sæter over the far more obvious Casper Tengstedt was backed up by the stats, but backfired horribly: Tengstedt was the highest-scoring forward of the week, while Sæter was yellow carded and then subbed at half-time. To make matters worse for his owners, he’s now suspended for the final gameweek.

In total, our strikeforce contributed just a single point to a weekly total of 47, only marginally higher than the overall gameweek average (44). Whether you were frustrated by following our picks last week or relieved at avoiding them, thank you for reading along this season, and good luck in the final gameweek. Let’s hope we can end on a high.

All hope of a medal place has now gone for Lillestrøm, who have (all too predictably) fallen away after a fantastic start to the season. Still, they’ve conceded fewer goals than anyone apart from champions Molde this season, and Mads Hedenstad Christiansen (5.9M) takes the first place in our team for the final gameweek. Christiansen has outscored every other keeper in the game this season (both in fantasy terms and in real life – he has one goal to everyone else’s zero) and now faces a HamKam side with three blanks in their last four away games.

Alfons Sampsted (5.9M) finally delivered on his underlying statistics to record a first assist of the season last time out. Sadly, he also conceded four goals as Bodø/Glimt played out an end-to-end thriller against Viking. We’re backing the deposed champions to finish strongly as they seek to wrap up second place, and Sampsted remains their most impressive defender in statistical terms.

We’ve spent a few weeks predicting a Kristiansund revival, and we’ve been consistently right on the team results but wrong on the individual players. Snorre Strand Nilsen (5.6M) comes into our selection as Kristiansund face an absolute must-win against already-relegated Jerv. Promisingly, Kristiansund have lost just one of their last six at home, with wing-back Nilsen the standout option from their defence.

Warren Kamanzi (5.2M) has been a favourite with Eliteserien Fantasy afficionados (quite a niche group, admittedly) ever since breaking into the Tromsø side early in the second half of the season. He hasn’t quite delivered on his initial promise, and is currently on a run of six consecutive blanks. Even so, a home game against Aalesund is a juicy fixture to end the season with, and both an attacking return and a clean sheet are possible in this one.

Mathias Løvik (5.0M) has ensured that Molde keep ticking over even while their senior wing-backs have been absent with injury, and the new Norwegian champions have now stretched their winning run to a scarcely-credible sixteen consecutive games. Løvik looks full of attacking intent, and will have a point to prove in the final game of the season as he seeks to keep himself in and around the first-team even after Haugen returns to full fitness.

Ola Solbakken (11.0M) says goodbye to Bodø/Glimt this weekend ahead of a free transfer to Roma. Solbakken was in tears as he officially announced his departure, and he’ll want to leave the club in style. We’re gambling on him outscoring Pellegrino this week: sitting in just 7.9% of teams overall, Solbakken could be a key differential for anyone wanting to shoot up the rankings this gameweek.

Eric Kitolano (7.7M) is the most widely-owned of our four midfield picks this week, in a little over 13% of teams. He has scored in each of his last five games, while opponents Aalesund were thumped 4-0 by struggling Kristiansund in their last away outing. August Mikkelsen remains a viable alternative from the Tromsø midfield, but Kitolano is very much the man in form.

Speaking of men in form, Kevin Kabran (6.6M) ended a goal-drought by scoring twice last week against Bodø/Glimt. Viking’s season has been drifting aimlessly after a strong start, but they’ll be looking for a strong finish at home to Odd, and Kabran (with 3% ownership) is another promising differential pick.

Sander Kartum (5.8M) has been at the heart of Kristiansund’s slightly miraculous return to form, and should be straight back in the starting line-up after missing last week’s game through suspension. Kartum has provided five assists in his five home games, plus a goal and seven bonus points. With an overall ownership of just 1.4%, he could be a great pick at home to Jerv.

Thomas Lehne Olsen (10.9M) has still shown only sporadic glimpses of his best form since returning from a sojourn in Dubai… It’s also worth noting that all four of his goals for Lillestrøm this season have come away from home, but we’re backing him to finally notch one in front of his own fans at the last opportunity. Opponents HamKam have kept just one clean sheet since Jendal replaced Hagen as first-choice keeper.

An apology is due to Casper Tengstedt (10.4M) for leaving him out of last week’s selection in an attempt to look for a clever differential. Tengstedt continues to look like Rosenborg’s answer to Haaland, and still hasn’t blanked at home since signing in the summer transfer window. He looks like the safest bet for the captaincy on the final day of the season.

Team of the Week Gameweek 30 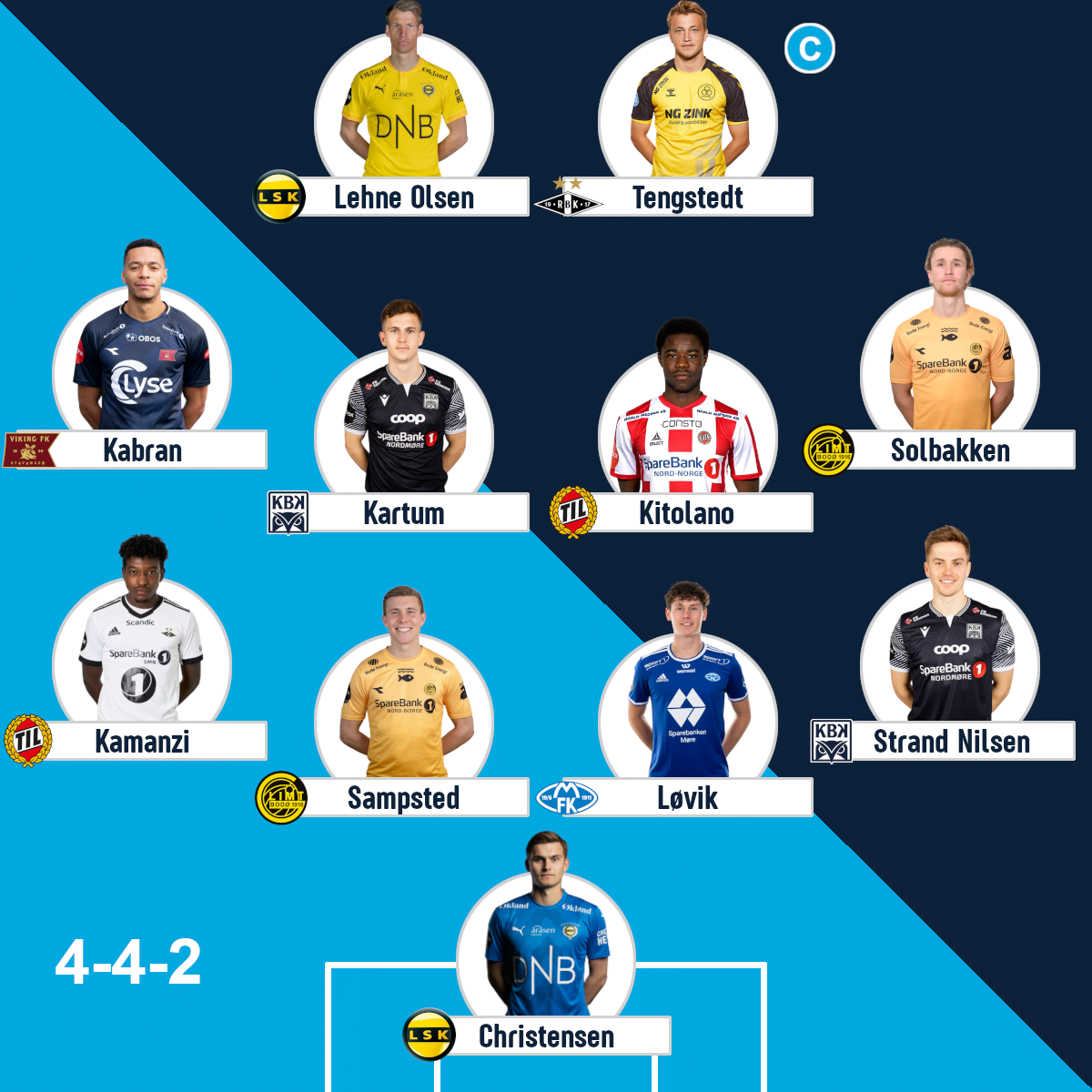