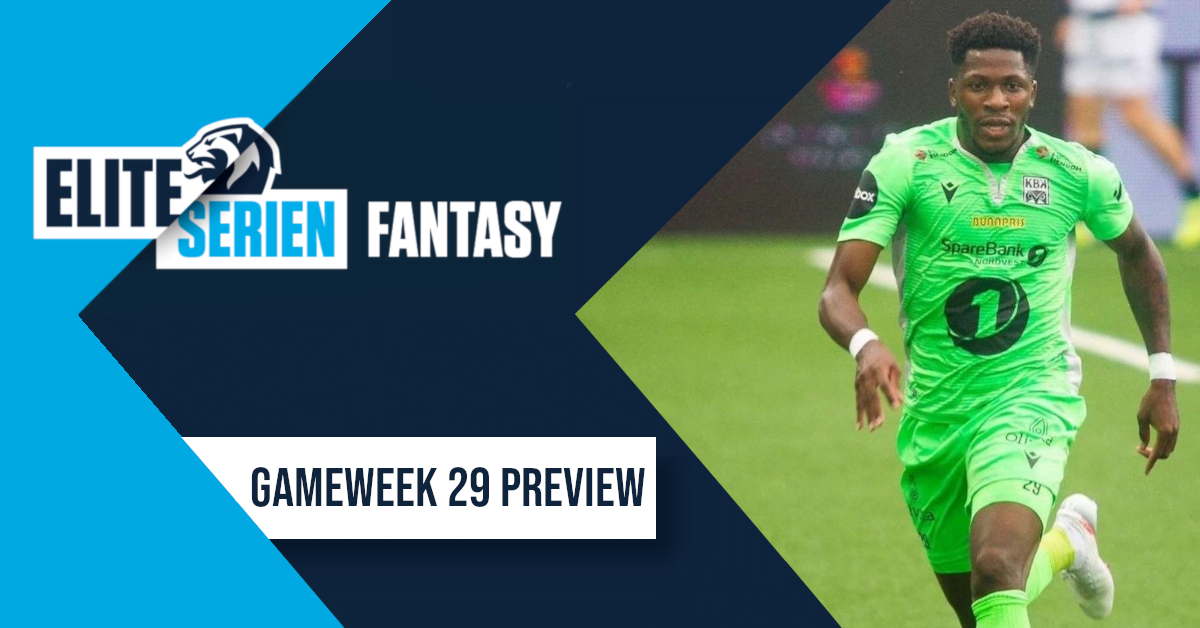 With just two gameweeks left and everything to play for, tipster Jacob Silkstone believes that Kristiansund BK’s Faris Moumbagna is worth considering in Eliteserien Fantasy this week as they look to snatch a relegation play-off spot at the death.

Two weeks out from the end of the Eliteserien season, our Tipsters selection seems to be limping towards the finish line rather than powering down the home straight. Differential captain August Mikkelsen wasn’t involved in either of Tromsø’s goals at home to Jerv; all too typically, midfield alternative Eric Kitolano (flagged as injured during the week) was the player who cashed in against the league’s weakest defence. We doubled up on the Kristiansund attack in a 4-0 win against Aalesund, but got just a single fantasy return. Of our starting eleven, only the ultra-dependable Casper Tengstedt delivered a double-figure haul.

All of which left us on a disappointing total of 31 points, a full ten below the overall average. Surely our fortunes will turn around this week? One factor that won’t be at all useful for this article, but should help any patient fantasy managers this gameweek, is that all eight games are scheduled to kick off at the same time on Sunday, meaning we should have every starting line-up ahead of the deadline. That could be especially helpful in a week where Bodø/Glimt, Molde, and Rosenborg all have enticing fixtures.

Lars Jendal (4.0M) has now started five consecutive games for a defensively solid HamKam side, and offers unbeatable value, even if his chances of a clean sheet are relatively low. Opponents Tromsø have been solid on the road, scoring in four of their last five, but have little left to play for. Jendal has a total of four save points in his five games this season.

Aalesund looked to have already packed their bags for an end-of-season holiday as they were thumped by Kristiansund last week. Lillestrøm have to win this weekend if they’re to have any hope of a top three spot, so we’re playing the numbers game and giving a spot to Vetle Winger Dragsnes (6.2M) again – still the most-selected player overall, with an ownership of just above 42%.

Rosenborg are suddenly right behind Bodø/Glimt in the battle for second place after a comeback win last weekend. Jerv will be no pushovers, based on recent form, but Leo Cornic (6.0M) has three attacking returns in his last five games and offers hope of points at both ends of the pitch.

After under-delivering all season, Alfons Sampsted (5.9M) finally got on the scoresheet in the midweek European game. Unfortunately, it was into his own net. He ranks fourth among all defenders for expected assists without having provided a single actual assist all season. We’re sticking to our earlier prediction that his bad luck won’t last all the way to the end of Gameweek 30.

Molde’s European campaign may have come crashing to a halt on a miserable Thursday night in Belgium, but they are looking untouchable domestically. They’ve now won an astonishing fifteen games on the trot, and wing-back Mathias Løvik (4.9M) has started five of the last six. With Kristoffer Haugen still not back in the matchday squad and Martin Linnes confined to the bench on Thursday, Løvik should retain his place… but keep an eye on the line-ups just in case.

With 221 fantasy points, Amahl Pellegrino (12.6M) is just six short of overhauling his own points record from two seasons ago. Having been handed a rest in Europe, he should be ready to play the full 90 minutes in a crucial game at home to Viking, who were dismantled by Molde last week. Close to an automatic captain choice if you’re seeking to maintain rank.

Although it’s tempting to double-up on the Bodø/Glimt midfield with the hugely impressive Hugo Vetlesen, we’re looking for a cheaper differential alternative in summer signing Albert Grønbæk (7.7M). Grønbæk has taken some time to really hit top form, but now has three attacking returns in his last three games after registering none in his first seven. He has previously been handed three bonus points even when blanking, so he is also a favourite of the ‘man in the stands’ system.

Having been rested last week and subbed early in Europe, we expect Ola Brynhildsen (10.4M) to be back in the Molde starting eleven for the home game against Sandefjord. If starting, he’s Molde’s most potent attacking threat and a serious consideration for a differential captain if you’re willing to take a gamble in a bid for a big green arrow.

With Osame Sahraoui delivering only a string of one-pointers since returning from injury, we’re switching to Amor Layouni (8.0M) as our route into the Vålerenga midfield. Layouni has three double-figure hauls in his last six games, making him one of the most in-form players in the league.

Miraculously unflagged for what seems like the first time in months, Ole Christian Sæter (now 7.0M) makes a welcome return to our selection. Sæter ranks fifth in the league for expected goals, and (perhaps surprisingly) outranks teammate Tengstedt for expected goals per 90 minutes too.

Faris Moumbagna (6.4M) was a hugely disappointing pick last week, contributing nothing in a 4-0 win against Aalesund, but we’re sticking with him to complete our line-up as Kristiansund scrap to finish ahead of Sandefjord and give themselves a shot at avoiding relegation. Moumbagna ranks second in his team for expected goals and is a focal point for their attack.

Team of the Week Gameweek 29 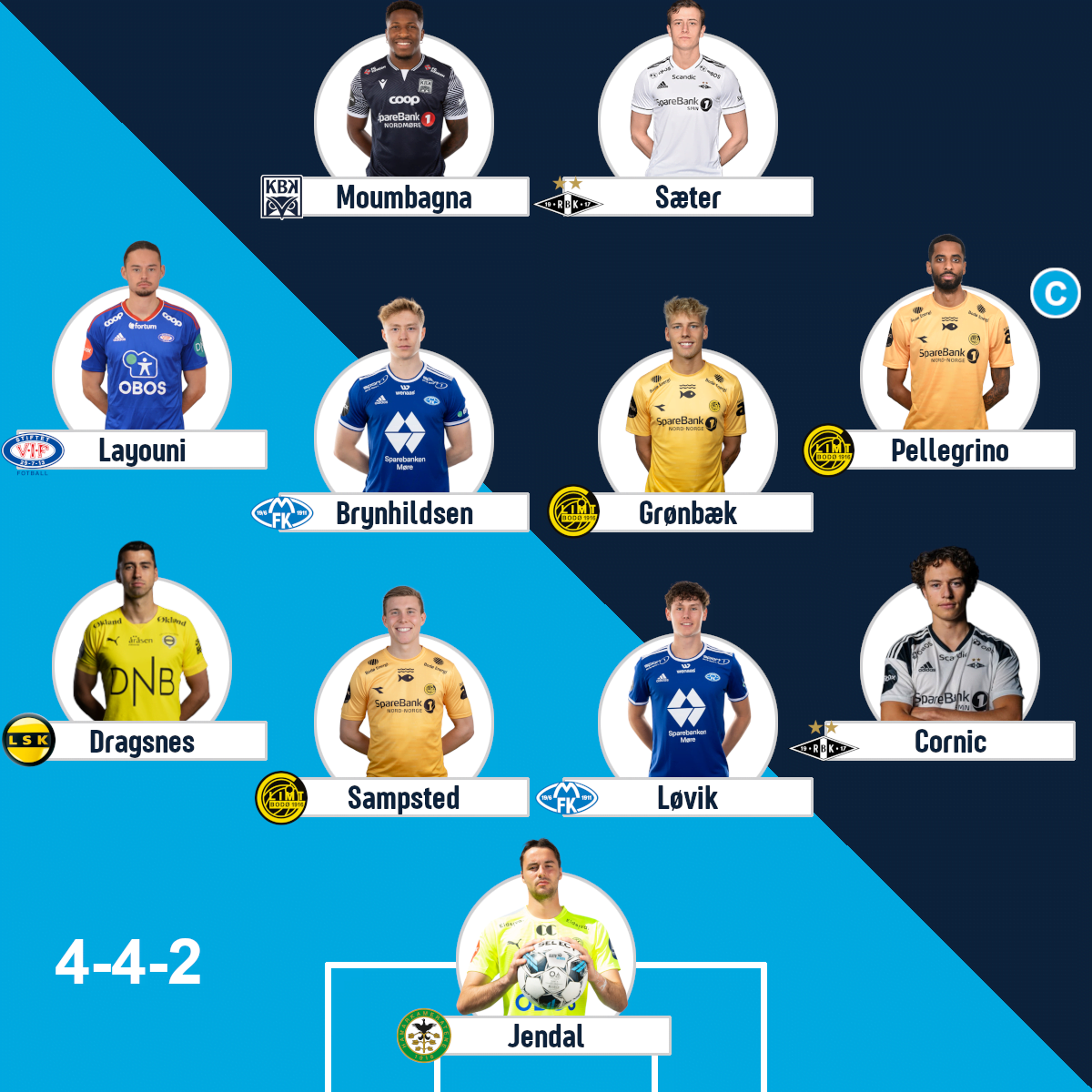