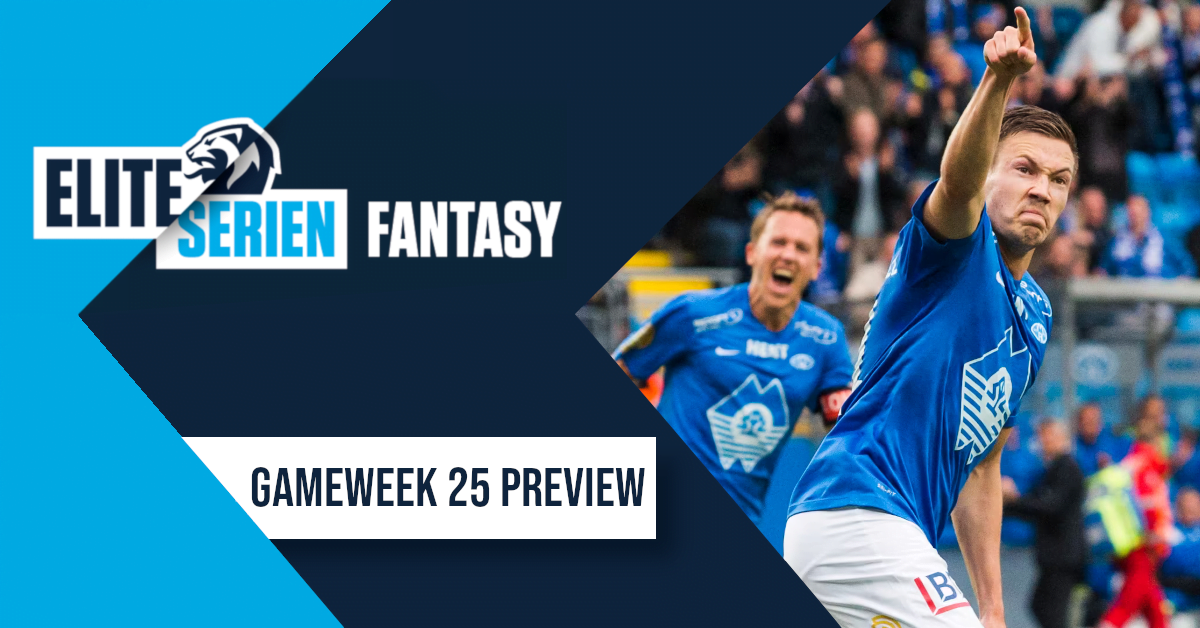 While newly-crowned Eliteserien champions Molde FK have kept a cleansheet in their last three games across all competitions, Martin Linnes offers a lot more, with four goals and four assists this season. So it is no surprise that he deserves a spot in Tipster Jacob Silkstone’s Eliteserien Fantasy TOTW for gameweek 25.

Slightly unexpectedly, Gameweek 24 turned out to be the best of the season so far for our Tipsters selection. Nine of the eleven picks returned, with double-digit hauls for Aleksander Melgalvis, Leo Cornic, Ola Brynhildsen, Amor Layouni and captain Casper Tengstedt. Our final total of 116 points wasn’t too far away from tripling the gameweek average (46).

With that score behind us, logic dictates that the only way is down in Gameweek 25. Bodø/Glimt’s game against Sandefjord is the headline fixture, but is it also a golden opportunity for a team with no realistic shot at winning the league to rest players in the middle of a packed European schedule? Sadly, we won’t be getting team news ahead of the deadline, but minutes played against Arsenal on Thursday evening are factored into our selection here.

HamKam’s first-choice keeper Nicholas Hagen remains flagged, although it wouldn’t be a huge shock to see him regaining his place this week. Even so, Lars Jendal is an ideal squad option for the bargain basement price of 3.9M. Do we expect a clean sheet away at Molde? Definitely not, although the hosts did struggle to break down a resolute Tromsø side last week. Do we expect save points? Well, it’s worth noting that Hagen’s only double-digit haul of the season came in the reverse fixture…

With Kristoffer Haugen still not fully fit and an early substitution in the midweek game, Martin Linnes (7.5M) remains our favourite defensive option from champions-elect Molde. Linnes now ranks third among all defenders for xA, and opponents HamKam are on a run of six games without a win away from home.

Cult hero Brice Wembangomo (6.1M) gets a long overdue return to our selection ahead of a home game with Sandefjord. Bodø/Glimt may have one eye on Europe and a mouthwatering fixture against Arsenal, but they should still ease past a struggling Sandefjord side. Wembangomo has completed 90 minutes in five of the last six games, and offers plenty of attacking threat too.

Strømsgodset don’t have much left to play for, and it feels as though their season is drifting towards a lower midtable finish. They’ve lost four of their last five, while opponents Tromsø gave Molde a very close game last week and were unlucky to come away with nothing. Warren Kamanzi (5.0M) has been a revelation since cementing a regular starting spot, and we like his chances of adding to a total of five attacking returns so far this season.

Budget defender Dennis Gjengaar (4.1M) started in the front three again for Odd last week, contributing one goal in a 2-2 draw against Haugesund. His minutes aren’t as secure as we’d like, but a 4.1M defender playing on the wing seems almost too good to ignore.

This is another of those weeks where Amahl Pellegrino (12.3M) looks impossible to ignore. A top-class performance against Lillestrøm saw him reach 20 goals for the season, and he’s surely not done yet. The major question mark this round is over how many minutes he gets: there’s no need to give him the full ninety against Sandefjord, but he’ll almost certainly be the most captained player this week and it’s “hide behind the sofa” time if you don’t own him. It’s worth noting that he wasn’t subbed early on Thursday evening, so we’d bet on at least some rest in this fixture.

If it weren’t for some bad luck with injuries, Ola Brynhildsen (10.4M) would be in considerably more than 14% of teams overall. He scored twice in the Europa Conference League fixture on Thursday, and has goals in seven of his last eight league games. As Molde look to wrap up the title early, he looks like the most essential component of their attack.

Tobias Heintz (7.9M) was one of the few players to let us down last week, but he has five goals in his last three appearances at home and Sarpsborg will be optimistic of continuing their recent strong run with a win over midtable Haugesund. Heintz is 11th in the league for expected assists and 12th for expected goals – one of very few players who ranks highly in both tables.

This week’s first big punt is a player who has just one goal in his last fifteen matches and is owned by 3% of teams. Simen Bolkan Nordli (7.4M) was heavily linked with a move away from Aalesund during the summer transfer window, but he has stayed put, and we like his chances of a haul against Jerv (his highest score of the season came in the reverse fixture). He outranks all of his teammates for expected assists, although he hasn’t quite delivered on his underlying stats yet.

Markus Kaasa (6.1M) was benched for the midweek European game, but has started all of the last four in the league (scoring four goals). At his price, he’s a great route into the Molde midfield, possibly alongside Brynhildsen.

Along with Heintz, Moses Ebiye (7.3M) was our only other pick to blank last round. And, just like Heintz, he’s getting another chance to impress. Aalesund travel to face a Jerv team who are surely relegation-bound. Ebiye ranks in the top ten of all active players for expected goals, and has been on the scoresheet four times in his last five matches.

Team of the Week Gameweek 25 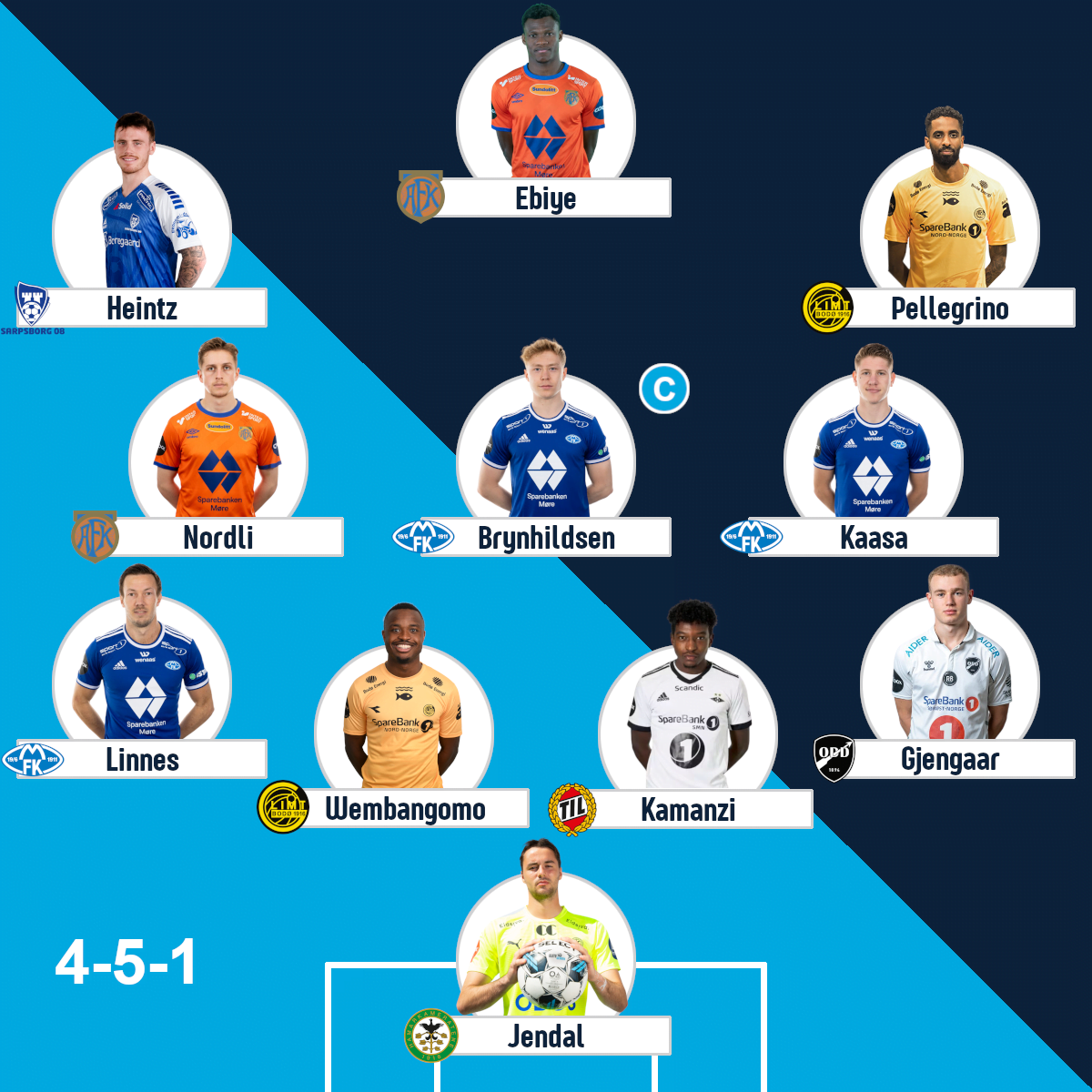