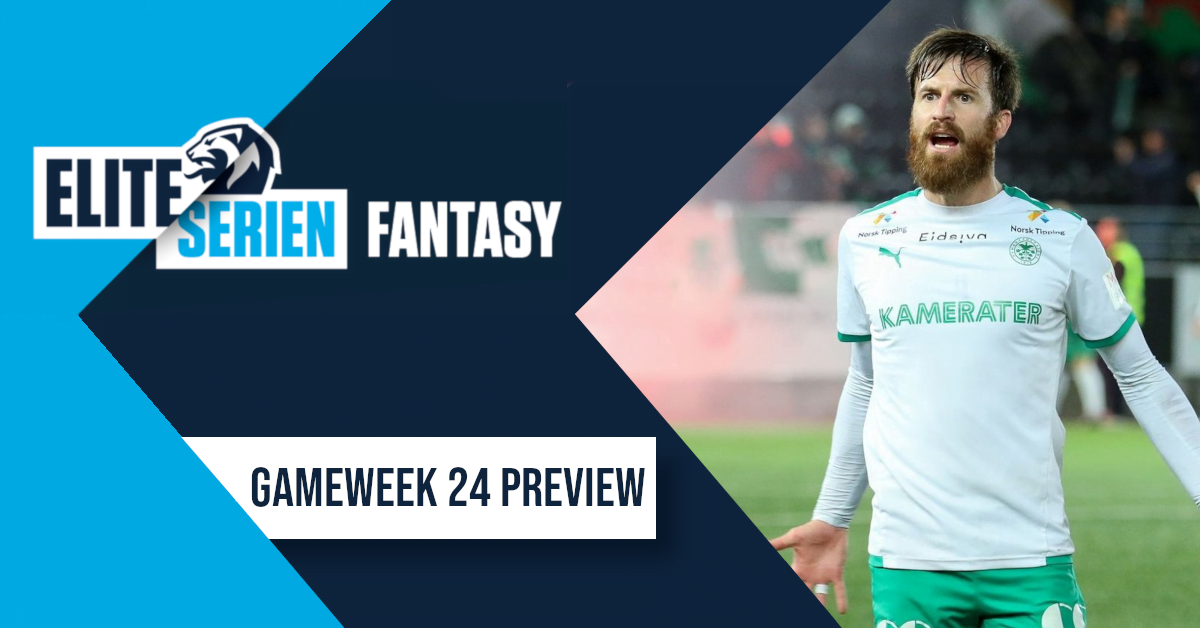 Jerv have been the team to target in Eliteserien Fantasy, and rightly so. They are on a five-game losing streak with relegation all but confirmed, and to make matters worse; they have conceded 18 goals in the same period. So it is no surprise that Fantasy Tipster’s Jacob Silkstone has three HamKam players in his TOTW.

Welcome back for the home stretch of the Eliteserien season, following an international break that most Norwegians will be happy to forget in a hurry. In the last round of league games, Molde tightened their grip on the title and now sit a probably-unassailable 13 points clear of Lillestrøm. Rosenborg have taken full advantage of Bodø/Glimt’s mediocre recent form to move into third place, while Jerv and Kristiansund look doomed to relegation barring an unlikely run of wins.

Our Fantasy Tipsters selection had another strong week, although David Datro Fofana was a disappointing captain pick, somehow emerging from a 3-0 cruise against Aalesund without a single attacking return. Frustratingly, Fofana’s biggest haul in the last ten gameweeks came when he was reported sick and flagged before the match against Jerv.

We had more luck with Sarpsborg’s Tobias Heintz, who hit a hat-trick, and Rosenborg’s Ole Christian Sæter up front. Our keeper pick, Magnus Smelhus Sjøeng, also made it to the overall team of the week, and provided us with one of our three clean sheets. Our total score of 75 points was only a better captain pick away from managing to double the gameweek average (42).

Jerv have put up a fight in recent weeks, but shipping four goals away at Sarpsborg last round must surely be the nail in the coffin. In theory, this is a good time to be facing a team low on morale and seemingly destined for relegation. Rumours also suggest that HamKam’s Lars Jendal (3.9M) might be set for a first start of the season, offering us a one-week-only bargain option. Although not without some relegation concerns of their own, HamKam have been very solid at home, keeping four clean sheets and never conceding more than twice.

Despite significant sales and a price drop while he was out with a short-term injury, Martin Linnes (7.3M) has been by far the most consistent defender in the fantasy game this season. He ranks second among all defenders for expected assists and, as Molde’s captain, he should be a regular starter until the title is secured.

Rosenborg have their sights set on a top-two finish now, and defensive prodigy Leo Cornic (5.9M) has started each of the last three games. Sitting in just 0.2% of teams overall, his attacking threat has already yielded an assist and he represents a great differential pick for the run-in.

Not for the first time this season, we’re gambling on double HamKam defence, with goalkeeper Hagen joined by club captain Aleksander Melgalvis (5.1M). We mentioned earlier that Martin Linnes ranks second among defenders for expected assists; only Melgalvis is ahead of him…

Molde’s Ola Brynhildsen (10.2M) was part of the national team squad over the break, and should be brimming with confidence after scoring in four consecutive games. Tromsø away can be a tough fixture, particularly if the weather takes a turn for the worse in northern Norway, but Molde will be looking to get the title wrapped up as soon as possible, and Brynhildsen looks like the key man in attack at the moment.

With Osame Sahraoui forced off early due to a hip injury, Amor Layouni (8.1M) stepped up to secure the points for Vålerenga against Sandefjord. Layouni’s form has been patchy this season, but a closer look at the numbers reveals he has five goals in his last seven starts. Expect him to be given significant minutes again this week, especially if Sahraoui isn’t fully fit.

Having been rewarded with one of the highest individual hauls of the season last round, we’re continuing to back Sarpsborg’s Tobias Heintz (now up to 7.7M) ahead of a visit to Sandefjord. Heintz has six goals from his last six games, while Sandefjord are in dire form — they’ve won none of their last eight.

Haugesund’s Mads Berg Sande (5.4M) is our budget midfield pick this week, making his first appearance in our team. Haugesund have been strong at home lately, with a narrow defeat against Molde the only blemish in their last five games in front of their own fans, and Sande has nine attacking returns over the course of the season — giving him the highest fantasy points total at his price range. Additionally, all of his attacking points since GW10 have been at home.

Casper Tengstedt (10.0M) is close to an automatic selection, having blanked just once since joining Rosenborg in the summer. With strike partner Ole Christian Sæter struggling to return to full fitness, Tengstedt’s contribution will be vital against Kristiansund this weekend. A record of 68 fantasy points in seven games speaks for itself, and Tengstedt takes the captain’s armband for us this gameweek.

Moses Ebiye (7.2M) has been thriving since moving south from Tromsø to Aalesund, racking up four goals in his last four games. This week’s opponents are Viking, who had a great start to the season — briefly threatening a title challenge before drifting down towards midtable mediocrity. They’ve conceded 13 in their last five away games, and their defence continues to be affected by a combination of injuries and suspensions.

Completing our line-up is a striker who has scored just once in his last thirteen games, sits in 3.9% of teams, and almost definitely won’t be featuring in our picks again this season. Pål Alexander Kirkevold (6.4M) is the final part of a HamKam triple-up against Jerv. Fun fact: his xG total for the season is higher than Casper Tengstedt’s (of course, it helps that Kirkevold has played nearly three times as many games…).

Team of the Week Gameweek 24 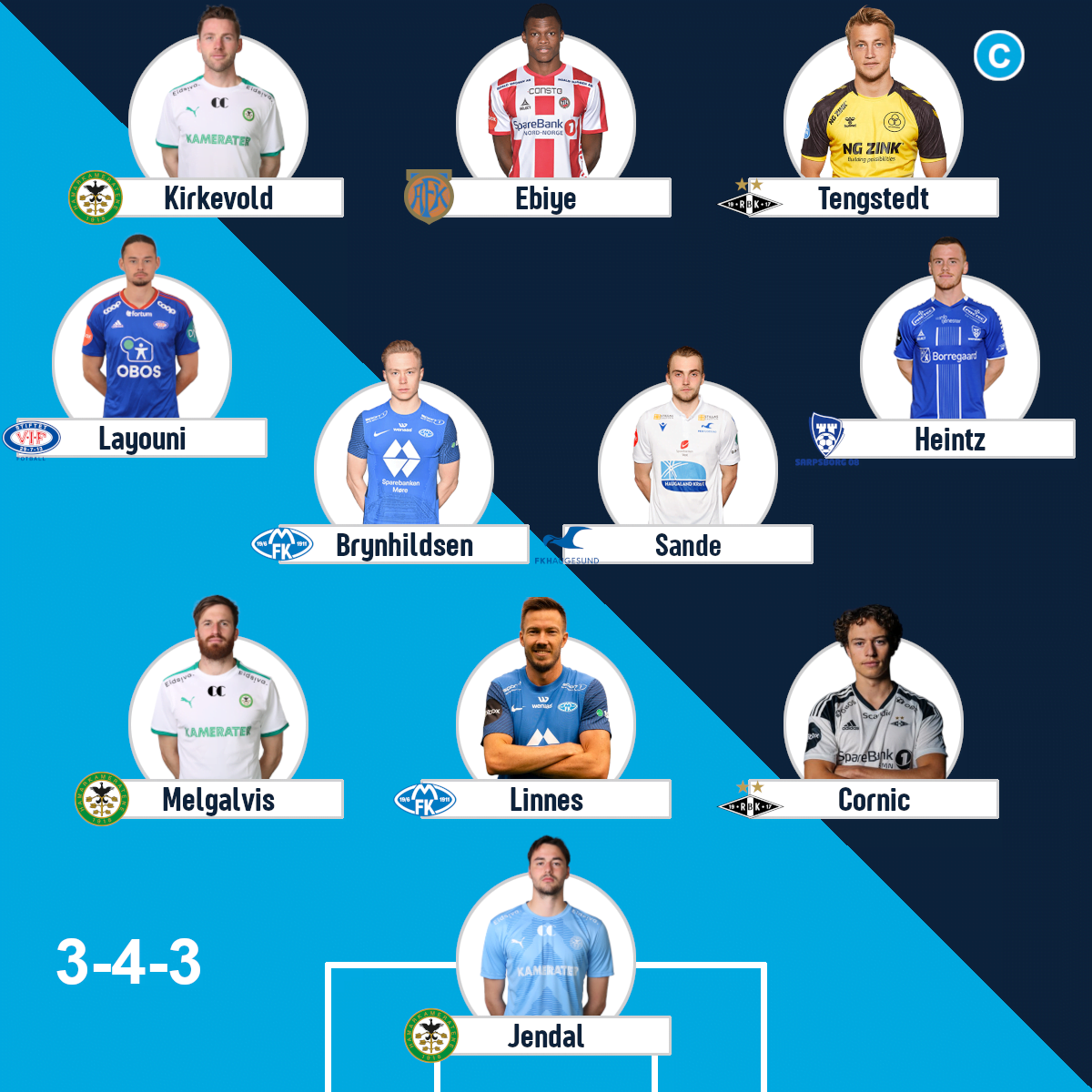