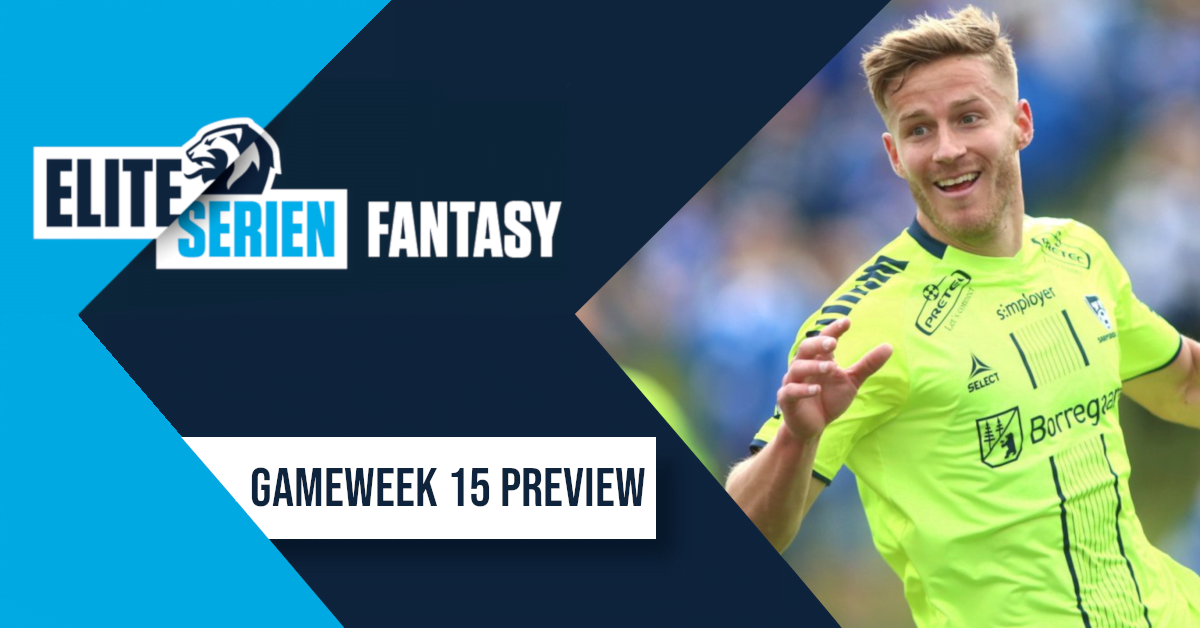 While they haven’t had the best start to the season and are in the bottom half of the table, tipster Jacob Silkstone creates a strong argument why Sandefjord could be a good bet in gameweek 15 of Fantasy Eliteserien with a doubleheader against Molde and Kristiansund.

Another tough week in the frequently frustrating world of Eliteserien Fantasy: Veton Berisha, for a long time the most reliable source of points in the game, is almost certainly heading to Hammarby, and nobody has quite stepped up to fill the void. A series of low-scoring games led to an overall average of just 34 points, by far the lowest of the entire season.

Perhaps unsurprisingly, there wasn’t much to celebrate in our Team of the Week selection. Captain David Fofana contributed an assist, winning a penalty, and looked dangerous throughout Molde’s game against Haugesund, but a yellow card meant he finished with just four points in total. A clean sheet from Kristoffer Haugen was our only other success as our team ended with a rather depressing total score of 32.

Gameweek 15 is both a double and a blank: Lillestrøm and Aalesund have no fixtures, while Sandefjord and Kristiansund play twice. With two home games (albeit one is against league leaders Molde) Sandefjord look like the team to invest in, although fantasy managers will be perturbed by the fact that key asset Mohamed Ofkir is still flagged because of a thigh injury.

One of the few things we got right in last week’s article was predicting that Hugo Keto (4.4M) is now first choice between the posts for Sandefjord. The double gameweek brings potential save points against Molde and a possible clean sheet at home to Kristiansund; Keto remains the cheapest starting keeper in the game.

With the defending champions facing the weakest attack in the league, we’re heading our defensive selection with Bodø/Glimt’s Brice Wembangomo (6.0M). Wembangomo’s xA stats are on a par with teammates Ulrik Saltnes and Amahl Pellegrino, who are available for almost twice the price in Eliteserien Fantasy.

Adrian Pereira (6.9M) leads every other defender in the league for xA per 90 minutes, and is a great pick despite a slightly exorbitant price. Rosenborg started the season with three consecutive clean sheets at home, and the stats indicate they have one of the strongest defences in the league. Opponents Tromsø were thumped 5-1 in their last away game, so are likely to be focused on keeping it tight this time.

Kristiansund have had an utterly miserable season so far, and key defender Christoffer Aasbak (5.9M) has just 10 fantasy points from 10 starts. He’s not a hugely exciting pick, but he does have far better attacking stats than any of his defensive colleagues and we’re happy to include him as a double gameweek punt.

After being in and out of the preferred XI earlier in the season, Josef Baccay (4.5M) has nailed down a spot for Odd, starting each of their last eight matches. Opponents Kristiansund still have just a single point so far, with just one goal in their last three games at home.

League top scorer Amahl Pellegrino (11.8M) made quite an impact off the bench last week, scoring twice in just thirteen minutes against a stubborn HamKam defence. There are still some question marks over his fitness, but he shouldn’t need the full 90 in order to rack up a sizeable score at home to Jerv.

Mohamed Ofkir (7.0M) limped off the pitch at the end of the last gameweek as a run of four successive double-digit hauls came to an abrupt halt. Still, he’s expected to play a part in both games of Sandefjord’s double; pending any late fitness updates, he looks like one of the best captain picks this week.

Molde’s Magnus Grødem (8.1M) converted a crucial penalty to keep his side at the top of Eliteserien last gameweek. Crucially for our selection, he played just a few minutes of Molde’s midweek European win against Elfsborg, suggesting he’ll get the nod to start against Sandefjord on Sunday. He’s currently fourth in the league for expected goals, and first among all midfielders.

Following a run of eight goals in as many games, Alioune Ndour Badou (8.9M) has gone cold lately, with three consecutive blanks. Still, as the saying goes, class is permanent. A home game against Sarpsborg might be exactly what he needs: his opponents have conceded eleven goals in their last four games.

Joel Mvuka (6.5M) was subbed early in the midweek European game and is on a run of two consecutive starts for Bodø/Glimt in the league. He’s ranked higher than any other Glimt player apart from Pellegrino for expected goals per 90 minutes, so he takes his place as our mid-priced midfield punt for this week.

For the first (and presumably last) time this season, we’re tripling up on Sandefjord. Alexander Ruud Tveter (6.8M) takes our striker slot. His expected goals total is far higher than any of his teammates (including Ofkir) and he has attacking returns from three of his four starts at home this season. With the injury doubts over Ofkir, we’re taking a gamble and backing Ruud Tveter as our captain for the double gameweek. 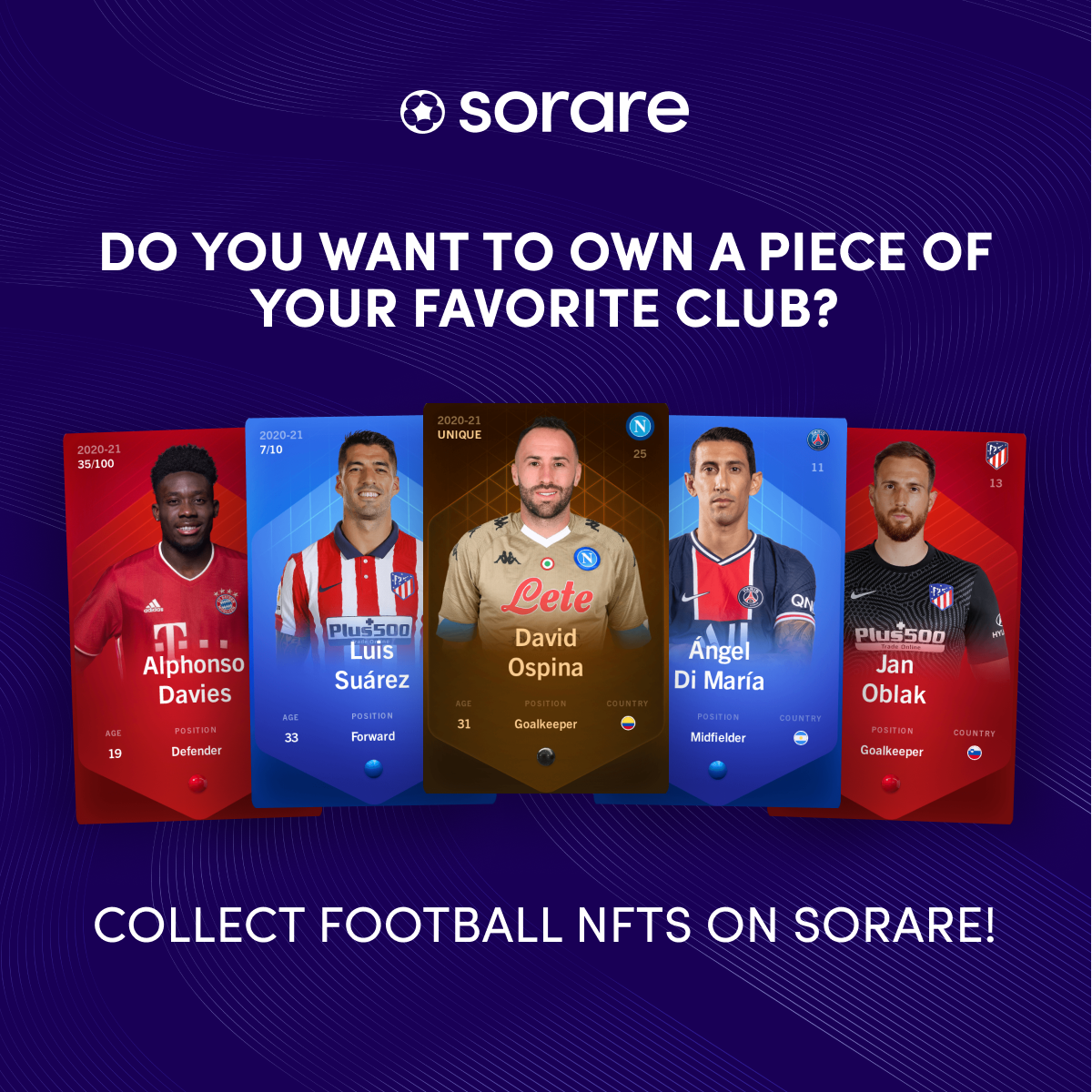 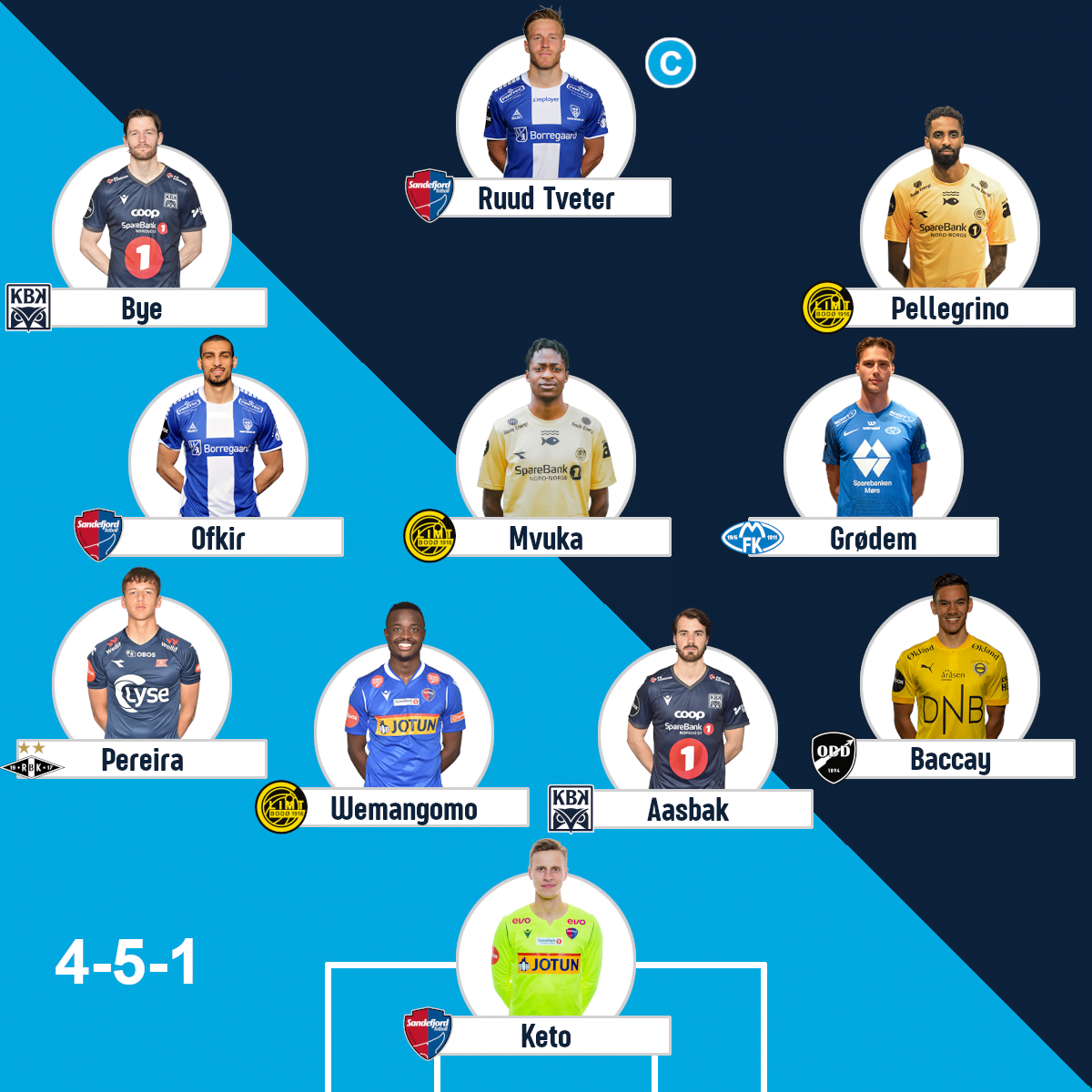