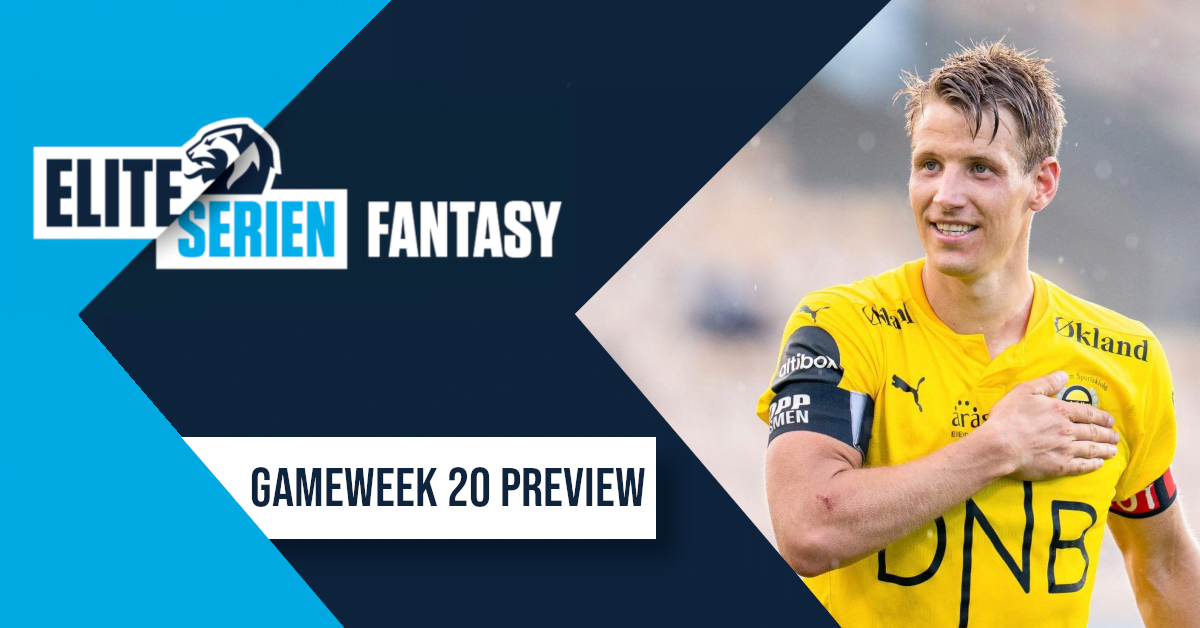 Fantasy-favourite Thomas Lehne Olsen is back in the Eliteserien after a short stint in the middle-east and is one of the first names on Jacob Silkstone’s Eliteserien Fantasy TOTW with a fixture against bottom-of-the-table Kristiansund.

Better late than never… Captain Casper Tengstedt eventually delivered the points for us with a close-range winner in stoppage time as Rosenborg just about saw off a stubborn Aalesund side. With a huge haul from Vetle Winger Dragsnes (who could have had an extra assist if the rules had been interpreted a little more generously) and clean sheets from Magnus Smelhus Sjøeng and Benjamin Tiedemann Hansen, plus the usual imperious performance from Amahl Pellegrino, we could have been on for our best score of the season if we hadn’t got our two Strømsgodset picks wrong. In a 6-0 win over Jerv, our two recommended players scored just three points between them: Lars-Christopher Vilsvik was unflagged, but withdrew from the matchday squad with an injury; Herman Stengel initially registered an assist from a corner, but it was taken off him after a post-game withdrew.

Even after those minor setbacks, our tipsters team registered a total of 78 points, twenty ahead of the overall gameweek average.

Barring any unexpected postponements, DGW20 will be the last big double of the season. Kristiansund, Viking, Tromsø and Strømsgodset all play twice, offering an opportunity to use our last remaining chips. It’s also worth noting that Bodø/Glimt’s Champions League play-off on Wednesday evening went to extra-time and ended in a demoralising defeat against Dinamo Zagreb. Can they bounce back against Jerv on Saturday, and will any of the big names be rested? Luckily, team news will be available (just) before the deadline.

Strømsgodset’s Thomas Myhra (5.1M) ranks third in the league for clean sheets and fifth for total saves, both higher than any other DGW keeper. Away games against Sandefjord and Tromsø might not be the easiest prospect for a side that tends to be significantly stronger at home, but Myhra is still a very solid option for this week.

Dedicated xG conceded fans will know that Tromsø have ranked as the strongest defence in the league for long periods of the season, although they now sit just behind Molde and Viking. Towering centre-back Christophe Psyche (4.9M), an Eliteserien Fantasy cult hero in previous seasons, looks likely to start both games and possesses significant attacking threat from set pieces.

Having been in out and of the team for the first quarter of the season, Viking’s Viljar Vevatne (4.7M) has now played the full ninety minutes in each of the last seven games. With rotation a concern after a tough European tie, Vevatne looks like one of the most secure picks from the Viking defence, at a favourable price.

With our budget going mainly on midfield and attack, we turn to bargain basement defender Isak Helstad Amundsen (4.4M) again. Helstad Amundsen has established his place as a regular starter for Bodø/Glimt, and they look the most likely of the single gameweek teams to register a clean sheet this week.

Although we expect some rotation for Bodø/Glimt this week, there’s no way we can overlook Amahl Pellegrino (12.3M) against the weakest defence in the league. Pellegrino has been on an astonishing run of form lately, with eleven goals and an assist in his last six matches (despite completing ninety minutes in just two of them). Look out for team news, but even if he only has a cameo off the bench against Jerv he’s still capable of doing serious damage. In the expectation that he’s more likely to start, he’s our captain this week.

How many minutes will Zlatko Tripic (9.5M) play? He hasn’t completed more than 45 minutes in any game since GW4, but he’s working his way back to full fitness and is exactly the kind of player we’re willing to punt on for one week only. Among active players, he ranks first in the league for expected goal contributions per 90 minutes.

After being linked with a transfer away from Tromsø earlier in the summer window, August Mikkelsen (7.8M) has emphasised his desire to stay and rediscovered his best form recently, with an attacking return in four of his last five matches. Although he’s currently flagged, local press reports suggest he’ll be ready to start both games of the double. Eric Kitolano is a viable alternative at a slightly more budget-friendly price point.

It’s looking bleaker and bleaker for bottom of the table Kristiansund, but there’s still some hope as long as Bendik Bye (6.7M) keeps scoring. He now has five goals in his last nine games, and a penchant for performing in double gameweeks. He’s the only Kristiansund player to make our selection this week.

League leaders Molde come into this gameweek on a high, as the only Norwegian team to win their midweek European match. A world-class volley from Emil Breivik (5.2M) set them on their way in a 4-0 win against Wolfsberg, and the budget midfielder ranks seventh in the league (ahead of any other Molde player) for expected assists. Opponents Sarpsborg are in freefall, losing seven consecutive games.

We round off our team with two strikers who haven’t started a single game in Eliteserien this year and have a combined ownership of under 1%. Firstly, Thomas Lehne Olsen (11.0M) returns to Lillestrøm and starts with a mouthwatering home fixture against relegation-threatened Kristiansund. Lehne Olsen racked up 26 goals and three assists last season; he isn’t a guaranteed starter, but reports suggest he’s match-fit and ready to go.

Erling Haaland’s cousin, Jonatan Braut Brunes (8.5M), was the top scorer in the Norwegian first division at the time of his transfer to Strømsgodset. Catching Covid meant his first start for his new club will happen a few weeks later than planned, but he’s now fully fit. With ownership of 0.3%, he could be an incredible differential pick for the double gameweek (but don’t expect him to start both games). 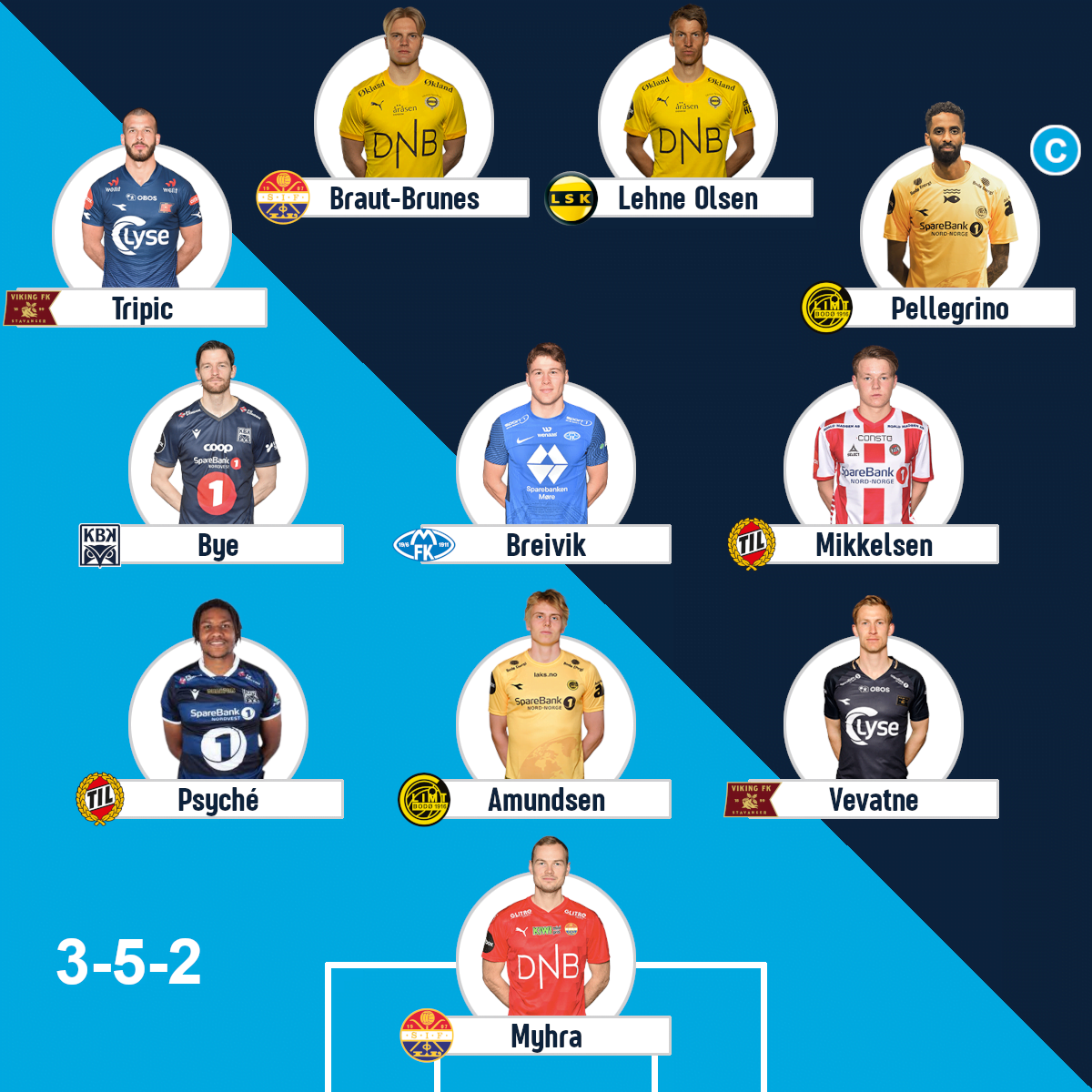