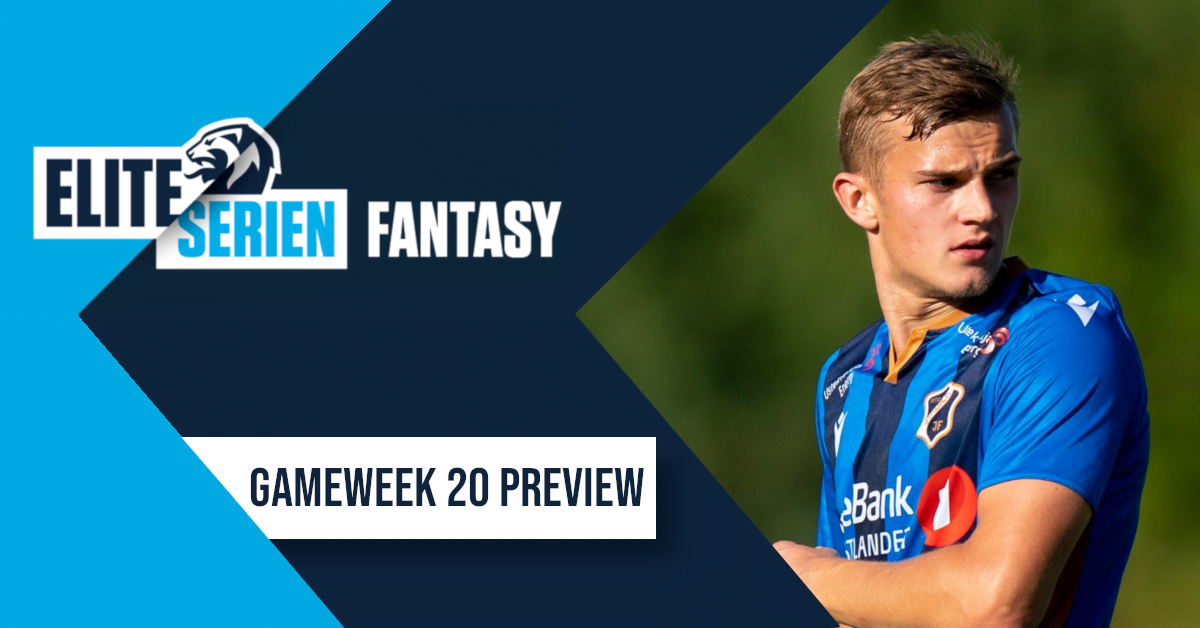 Molde’s Ohi Omoijuanfo boasts of an incredible goal-scoring record at home but Strømsgodset’s Fred Friday who was the hero in the previous double gameweek is tipster Jacob Silkstone’s pick for the captain’s armband with games against Sarpsborg and Stabæk in gameweek 20 of Fantasy Eliteserien.

While captain Cobra (Zdeněk Ondrášek) proved disappointingly venomless, blanking at home to Brann, there were a few hauls elsewhere in our Gameweek 19 team. Kristiansund full-back Snorre Strand Nilsen was, unexpectedly, the star of the show: he delivered on some enticing underlying stats to post a goal, an assist and three bonus points. Amahl Pellegrino also contributed a goal and three bonus points, and he looks like the most reliable pick in the league at the moment. Ohi Omoijuanfo continued his struggles away from home: he now has 12 goals in his last 6 home games, but 5 consecutive blanks away. For anyone wondering, he’s back at home this week…

This is the last scheduled double gameweek of the season, so a good point to think about deploying any remaining chips. Rich Uncle gives you a chance to stack up on three players each from Strømsgodset and Stabæk, if you want to go all-in on the two teams with double fixtures. All seasoned fantasy players will need no reminder that “All that glitters is not gold”, a line first penned by William Shakespeare during the disappointing 1597/98 fantasy season (disappointing in the sense that there were no double gameweeks at all back then). Double gameweeks and crushing disappointment go together like Ohi and home goals (or like Ohi and away blanks).

If you’re willing to risk it, here are our three recommendations from each of the teams.

Interestingly, they faced each other in the Norwegian Cup earlier this week and Strømsgodset won by an emphatic 5-1 margin. The teams weren’t quite at full strength, but the size of the defeat doesn’t bode well for bottom of the table Stabæk.

Strømsgodset handed a rest to key man Fred Friday (now priced at a discount 8.2M after a series of recent drops). Friday returned 17 points in his last double gameweek and will be a popular choice for the captain’s armband this week.

To complicate things, his replacement in the cup scored a hat-trick and is now pushing for a regular starting role. Nigerian striker Jordan Attah Kadiri (6.0M) arrived from Belgium in the summer transfer window and has played just ten minutes in the league so far, but his cup performance suggests he could be a potential fantasy bargain. His ownership is currently 0.1%.

With midfielder Johan Hove currently an injury doubt, we’re looking at the Strømsgodset defence for our final pick. Lars-Christopher Vilsvik (4.6M) is head and shoulders above his teammates (and most other defenders in the league) when it comes to underlying stats, and we’re hoping this is the week he finally delivers.

Stabæk players are understandably less of a priority to transfer in right now, but they have two decent fixtures and it’s now or never if they’re going to start climbing away from the foot of the table. Centre-back Simen Wangberg (4.4M) offers plenty of attacking threat at a bargain price, and rest in the cup is encouraging for his prospects of starting both games in the double.

Surprisingly, Kornelius Normann Hansen (6.5M) is top of the Stabæk pile when it comes to xGI stats, and was also rested for the cup game. One goal and two assists in his last six starts is a decent record compared to many of his teammates.

Oliver Edvardsen (7.0M) would have been our top Stabæk pick, but questions remain over his injury status. A thigh problem, initially assumed not to be serious, has kept him out for more than a month and there’s no confirmation yet that he’ll be back for either of the upcoming games.

After all that, we’ll begin our Team of the Week by betting against the DGW sides. Jacob Storevik (5.0M) hasn’t missed a minute for Sandefjord this season and should be between the posts as they face struggling Stabæk. Sandefjord have conceded just three goals in their last seven games at home, and will start this one as favourites for another win.

As mentioned above, Lars-Christopher Vilsvik (4.6M) is top of the DGW defenders when it comes to underlying stats. He hasn’t quite fulfilled that promise yet, but he’s our top defensive pick for this week.

Simen Wangberg (4.4M) was a Fantasy Eliteserien DGW hero back in his Tromsø days, and his xG stats suggest that he’ll be one of Stabæk’s key attacking threats from set-pieces.

Martin Linnes (6.0M) has produced bonus points in both games he’s started for Molde since arriving in the summer transfer window. Molde have kept cleansheets in three of their last four home games, and Linnes also possesses plenty of attacking threat.

Vetle Winger Dragsnes (4.9M) has two assists in his last four starts. Lillestrøm’s defence has been slightly disappointing recently, shipping five goals over the last two games, but they have a solid home record and will expect to win reasonably comfortably against Tromsø.

We’ve chosen to ignore injury doubts Edvardsen and Hove, meaning that Kornelius Normann Hansen (6.5M) is our DGW midfielder over choice. The reasons behind that pick are outlined above.

Amahl Pellegrino (12.1M) is close to being an automatic pick at the moment. Having regained the top spot in the league table, Bodø/Glimt play host to a Vålerenga side that were heavily beaten by Sandefjord on their last away trip. Despite having started just three times for his new club, Pellegrino already boasts five goals, one assist and seven bonus points so far.

Stefano Vecchia (9.3M) has been in red-hot form for Rosenborg recently, with five goals in his last four league games. The Trondheim team still have an outside shot at the league title, and will be expecting to brush aside Mjøndalen this week.

With some slight reservations after Kadiri’s pyrotechnics in the cup game, Fred Friday (8.2M), takes our captain’s armband ahead of Strømsgodset’s two favourable fixtures. He remains their most likely source of attacking points, and his overall ownership should be very high among the top Fantasy Eliteserien teams this week.

Ohi Omoijuanfo (12.4M) will look to continue his astonishing home form against Viking’s less-than-astonishing defence. The Stavanger-based side haven’t kept a single cleansheet in the league this season, and an away game against title contenders Molde doesn’t look like the place to start.

A punt on Kadiri for the final attacking spot was tempting, but we’re giving the nod to Lillestrøm’s Thomas Lehne Olsen (9.6M). Lehne Olsen is pursuing Ohi in the golden boot race, and faces one of the league’s weakest defences this week.

Fantasy Eliteserien Team of the Week for Gameweek 20 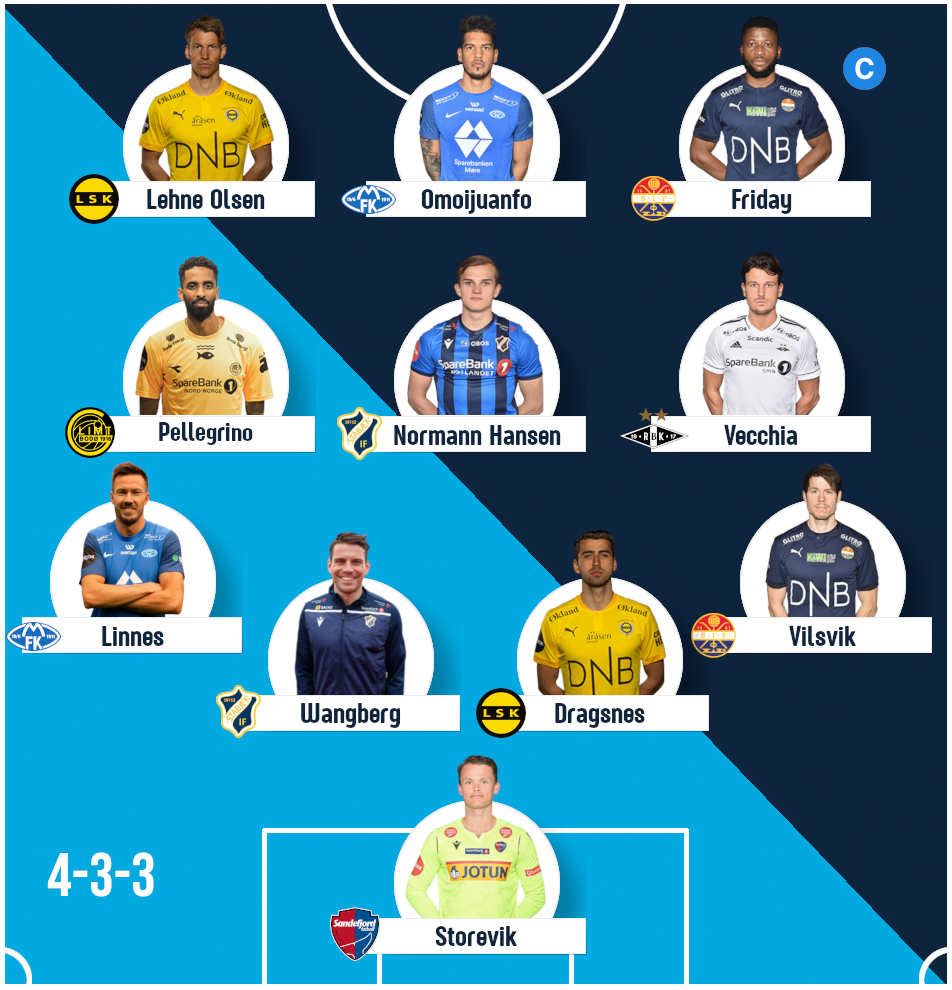