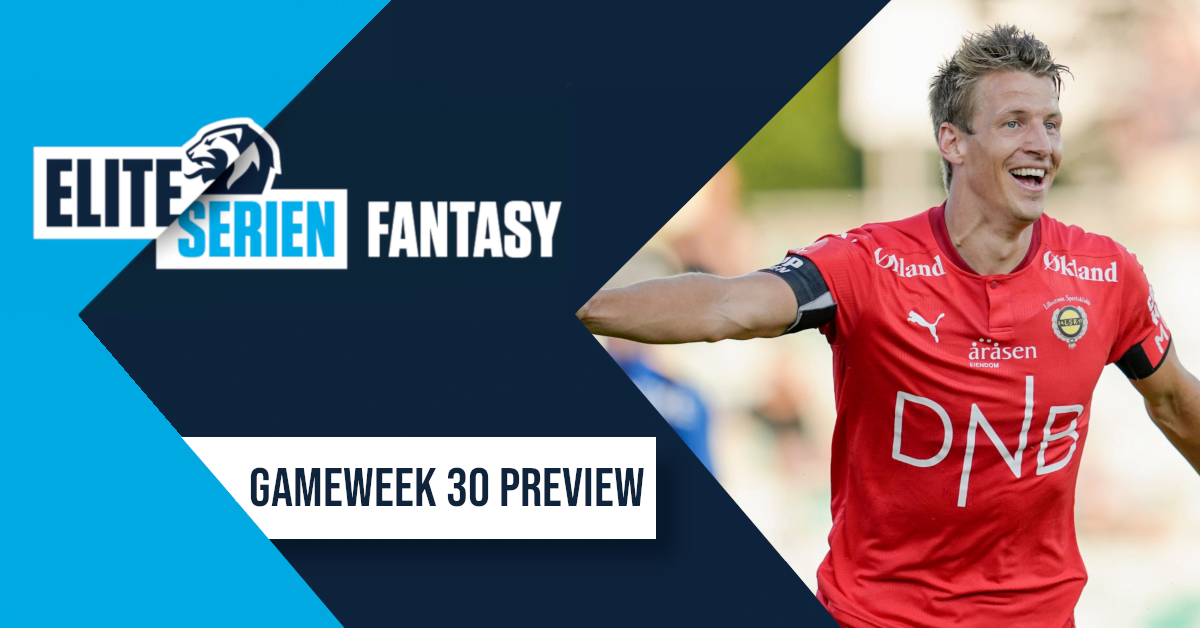 It is all to play for in the final week of the Eliteserien season with the title race and relegation battle wide open. When it comes to the individual awards, the golden boot race is set for an exciting finale, with Omoijaunfo and Lehne Olsen vying for the top goal-scorer award of Norway. Both players are a part of Jacob Silkstone’s Fantasy Eliteserien TOTW for gameweek 30.

Any recap that accurately summarised the wild emotional rollercoaster that was Eliteserien Gameweek 29 would have to be several pages long, so apologies in advance for trying to cram all the information into a quick couple of sentences… Perhaps the most accurate summary is that Bodø/Glimt nearly won the title but didn’t (yet), Molde nearly got back into the title race but didn’t (yet), and Brann almost got relegated but didn’t (yet).  Bård Finne volleyed in at the far post with the last meaningful kick of the game to earn Brann a vital point from a long away trip to Bodø, meaning that both the title race and the relegation battle are still alive as we head into the final gameweek of the season. The most likely outcome is still that Bodø/Glimt are champions and Stabæk stay up, but expect one or two more twists and turns on the last day. Goal difference is also a potential factor at both ends of the table, so all the teams involved still have something to play for.

Amidst all the excitement, our Fantasy Tipsters team had a disappointing week. Both our strikers scored, including our captain, but the rest of the team provided very little (a single bonus point from Magnus Wolff Eikrem isn’t much to shout about). We did manage to predict a clean sheet for Strømsgodset, but flagged keeper Viljar Myhra made an early return from injury, and Morten Sætra was back on the bench. Flags can be a frustrating part of Fantasy Eliteserien, where information isn’t as readily available as in FPL or the other larger games… On a personal level, I’m still struggling to get over Mushaga Bakenga making a mockery of his ‘injured’ status to score a hat-trick against Brann in the week that I sold him (and then getting a summer transfer to Japan once I bought him back).

Unsurprisingly, this week’s selection will rely heavily on players still in the mix at both ends of the table. Our first pick, though, has only pride to play for. Mads Hedenstad Christiansen (4.6M) has been something of an unsung hero since coming into the Lillestrøm team in GW5. Against Molde the last gameweek, he registered a total of seven saves; he also has clean sheets in three out of four home games since returning from injury in GW22, and opponents Sandefjord will finish safely in midtable no matter what the result on Sunday.

It’s an unconventional pick, but Simen Wangberg (4.4M) has a habit of scoring vital goals and putting in big performances when his team needs it most. Stabæk know they’ll avoid automatic relegation if they beat Odd in their final game of the season, and keeping it tight at the back will be key to their hopes. They have two clean sheets in their last three games, and Wangberg has also picked up two bonus points over that run. He also scored three times in his first nine starts for Stabæk and has been unlucky not to add to that total since.

Erlend Dahl Reitan (6.2M) has returned in each of his last three starts for Rosenborg and has nine assists so far this season. On the final day of the season, his opponents will be Strømsgodset, who have a notably appalling away record, winning just a single game all season. They’ve also failed to score in three of their last five. With attacking threat and clean sheet potential, Dahl Reitan takes our premium defensive slot ahead of the contenders from Molde and Bodø/Glimt.

Our final defensive pick is Tromsø’s Christopher Psyché (4.5M). Opponents Viking may have one of the strongest attacks in the league, but they’ve already wrapped up third place and a European spot for next season. Tromsø have been surprisingly frugal in defence recently, conceding just three goals in their last seven games, and Psyché secured three bonus points in their 1-0 win against Sarpsborg last week. Veteran Fantasy Eliteserien players will need no reminders about his attacking prowess either: starting the 2019 season as a 4.0M budget pick, he scored seven goals (and provided two assists), much to the fury of anyone who persistently benched him for the tougher fixtures…

Time for the big guns at last: Ola Solbakken (10.5M) is our chosen representative from Bodø/Glimt again, despite a recent run of blanks. With Mjøndalen needing a win to have any chance of survival, Glimt are likely to get plenty of opportunities on the counter. Pacy winger Solbakken is better placed than any other team member to thrive in exactly that scenario.

Ola Brynhildsen (8.4M) has provided more assists than any other player in the league this season, and his ability to spot the killer pass could be essential if Molde are to beat Haugesund and keep themselves in with a chance of snatching the title from Glimt. Goal difference is still a factor in the title race, so Molde will push for early goals and hope Glimt slip up against a Mjøndalen side locked in a desperate fight for survival.

Brann’s fate is out of their hands now, but a win will be enough to avoid automatic relegation unless Stabæk overcome Odd. In front of what should be a packed stadium in Bergen, Brann will back themselves to at least do their part and beat Sarpsborg. Finland international Robert Taylor (7.4M) has been by far their most consistent source of fantasy points this year, and has attacking returns in three of his last four games.

If Stabæk do emerge victorious against Odd, it could well be an ex-Brann player who sends his old club down. Bergen-born Fredrik Haugen (6.5M) has recently hit form for his new club and has three attacking returns in his last three games. Even when he blanked, he still collected a bonus point from Fantasy Eliteserien’s ‘man in the stands’.

While we’re not expecting Mjøndalen to beat Bodø/Glimt on Sunday, we do think it’s quite likely that they’ll score at least once. The defending champions have a long flight back from Ukraine after a tough European game on Thursday evening, and Mjøndalen have to push for goals given that anything other than a win sends them down. Lars Olden Larsen (5.9M) is their top scorer this season, and he takes our budget midfield slot for the final week.

Our attacking picks are built around the battle for the Golden Boot. Ohi Omoijuanfo (12.3M) has been in pole position for most of the season, and he now has 26 goals from 27 starts. Molde know that a win against Haugesund gives them an outside chance of the title, and Ohi will be the key man on his last appearance in Eliteserien.

His only realistic rival for the Golden Boot is Lillestrøm’s Thomas Lehne Olsen (10.0M). Lehne Olsen’s last-gasp wonder goal last gameweek put a huge dent in Molde’s title challenge and moved him to level with Ohi on 26 goals. We’re expecting both to score again this week; Lehne Olsen has the easier fixture on paper and is in better form, so he edges ahead as our captain choice for this week. 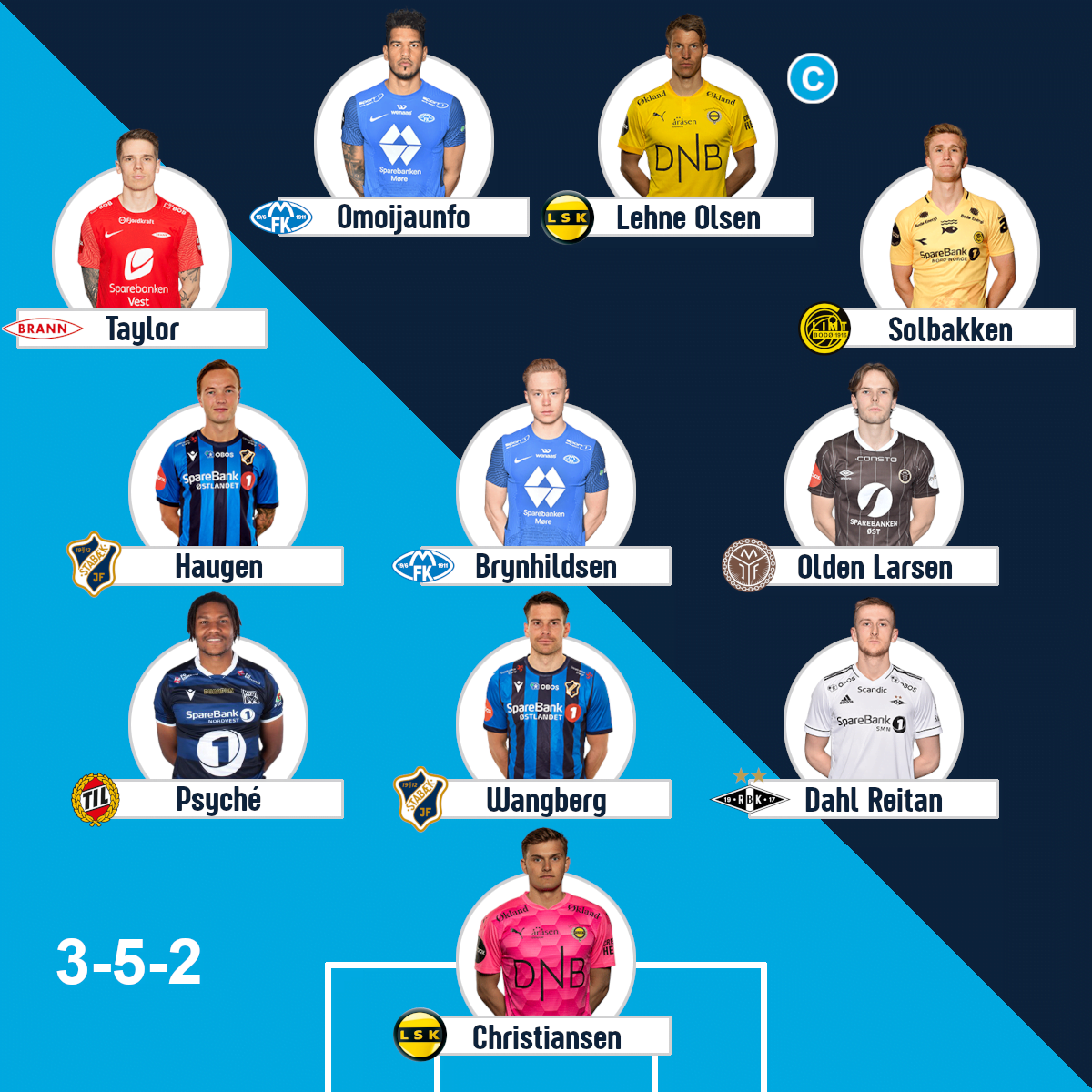