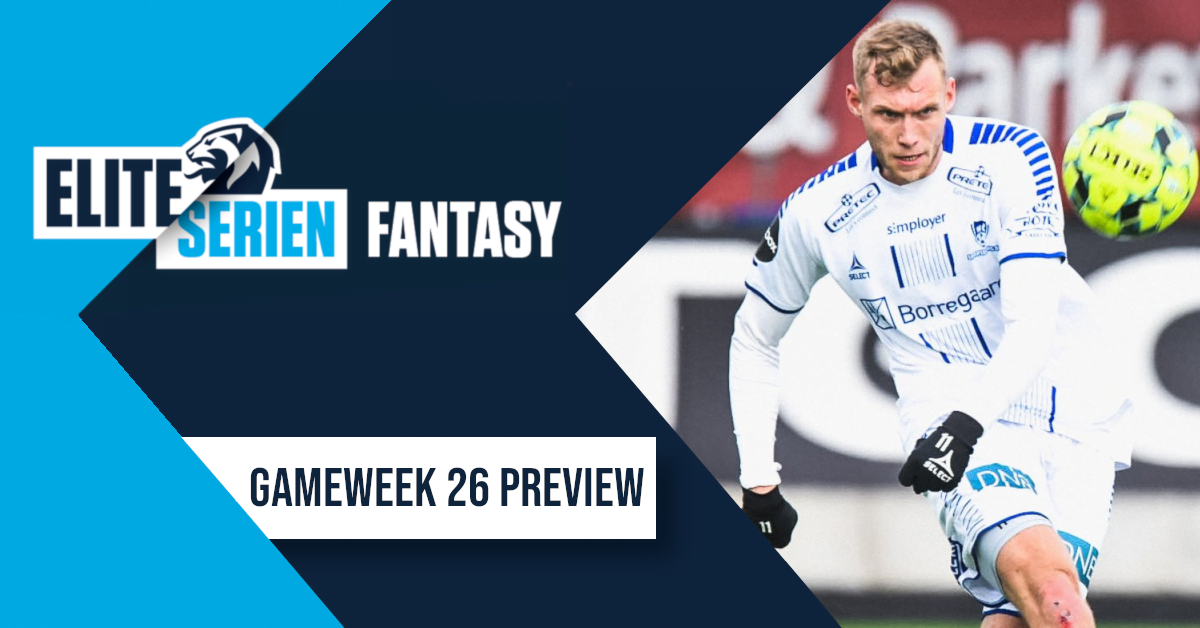 Sarpsborg’s Jonathan Lindseth is one of the most in-form players in the Eliteserien currently with six goals in his last five games. With a matchup against Stabæk, who’ve conceded the most away goals this season, he is one of the star players in Tipster Jacob Silkston’s Fantasy Eliteserien TOTW for gameweek 26.

The first rule of Gameweek 25 should be that we do not talk about Gameweek 25. A genuine Halloween horror show of a gameweek ended with an overall average of 30. Title-chasing Molde suffered a chastening 6-0 defeat against Strømsgodset, and the four players with the highest ownership all blanked. Fredrik André Bjorkan should have been the only one of our three defenders to come away with a cleansheet, but he limped off in the first half of Bodø/Glimt’s 1-0 win over Sandefjord.

The outlook for our attacking picks was equally bleak, with the exception of a couple of assists and a couple of bonus points for Oliver Edvardsen. There were also bonus points for Erik Botheim and Sander Svendsen, but otherwise, it was a week of cruel tricks rather than fantasy treats. At least our Fantasy Tipsters team doesn’t have any subs: my own miserable score was made infinitely worse by Strømsgodset duo Tobias Gulliksen and Jonathan Parr, keeping their combined 24 points very firmly on the bench.

We highlighted Odd’s Leopold Wahlstedt (4.5M) last week and were rewarded with only a single point, but we’re optimistic that it could be a case of second time lucky at home to Kristiansund. Kristiansund have struggled recently, winning none of their last four and drawing a blank in both of their previous two away games.

It’s not often that our first defensive pick is part of a team that conceded six last week. In fairness to Martin Linnes (6.0M), he didn’t play a single minute of Molde’s hammering against Strømsgodset. The good news is that he’s close to full fitness again: his selection still represents a gamble, but we’re tipping him to regain his place in the starting eleven at home to Sandefjord. With ownership of 1%, he’s our biggest differential punt of the week.

There are plenty of questions over the Bodø/Glimt starting line-up after another titanic effort against Roma on Thursday evening, but Alfons Sampsted (5.8M) hasn’t missed a minute in the league since GW6. Bjørkan rushed back from injury to face Roma and seems like a far more likely candidate for a rest on Sunday, leaving Sampsted an almost-certain starter. His three assists so far this season show that he has potential for an attacking return even if Glimt concede.

Lars-Christopher Vilsvik (4.7M) has been posting some of the best underlying numbers all season, but frustratingly for his owners, he didn’t register a single assist between GW9 and GW25. His best attacking performances of the season have come against the two best teams in the league, Bodø/Glimt and Molde. Backing him to finally follow the form book in a relatively easy game against Tromsø is almost certain to backfire, but he really does look like the best budget defensive pick at the moment.

Rosenborg’s Adam Andersson (5.8M) is another player who hasn’t fully converted some excellent chance creation numbers into fantasy points. Even if the attacking returns don’t come this week, opponents Brann have failed to score in either of their last two games and have one foot wedged firmly in the relegation trapdoor.

Even with Roma at something very close to full-strength, Ola Solbakken (10.3M) looked like one of the best players on the pitch in Thursday’s Europa Conference League clash. The pacey winger should be too good for Haugesund’s defence, and we’re backing him to be the best Glimt attacking option again.

Viking’s Zlatko Tripic (9.7M) created a mind-boggling nine chances against Sarpsborg last gameweek, only one of which was successfully converted. He took a while to get back to top form after a mid-season lull, but he now has assists in three consecutive games and should be confident of adding more as he faces bottom-of-the-table Mjøndalen.

Although he blanked against Viking last week, Jonathan Lindseth (6.6M) remains one of the league’s most in-form players. He has six goals from his last five games, together with an assist and six bonus points. Opponents Stabæk have conceded the most away goals of any Eliteserien team this season.

Tobias Fjeld Gulliksen (4.5M) has been producing some strong underlying numbers ever since he nailed down a regular place in Strømsgodset’s starting eleven, and he finally converted that promise into a fantasy haul last weekend. Even if we’re not expecting anything close to the 19 points he racked up against Molde, he provides an enticing budget midfield option for this gameweek.

While Molde’s title challenge seems to have collapsed in spectacular fashion, Ohi Omoijuanfo (12.4M) remains the league’s top scorer and he’ll want to sign off strongly before his transfer to Red Star Belgrade. A run of 12 goals in 6 home games came to a juddering halt with two consecutive blanks, but we’re backing him to return to form this weekend. He captains our selection once again.

Veton Berisha (11.1M) was the clear favourite for the captaincy last gameweek, only to disappoint his owners with his first home blank since GW5. His opponents back then were Mjøndalen: with Tripic now back in top form in Viking’s midfield, we’re expecting him to set things right at the second time of asking. 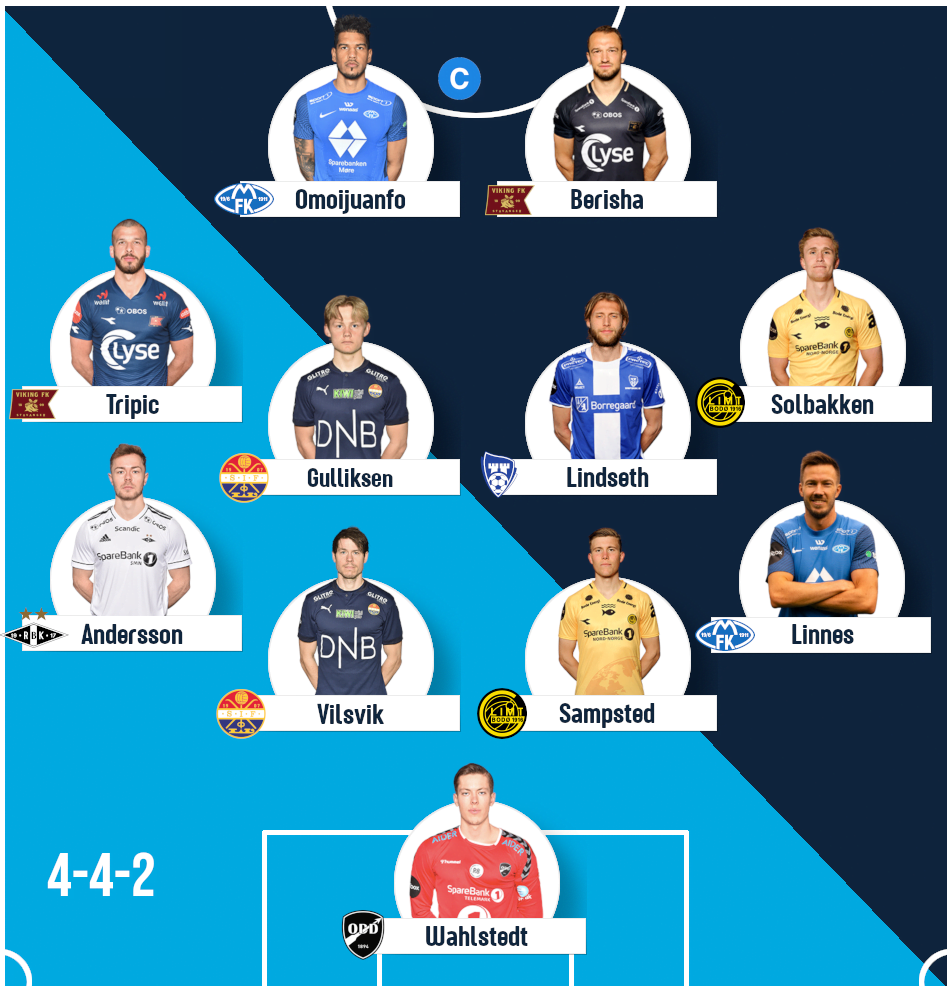