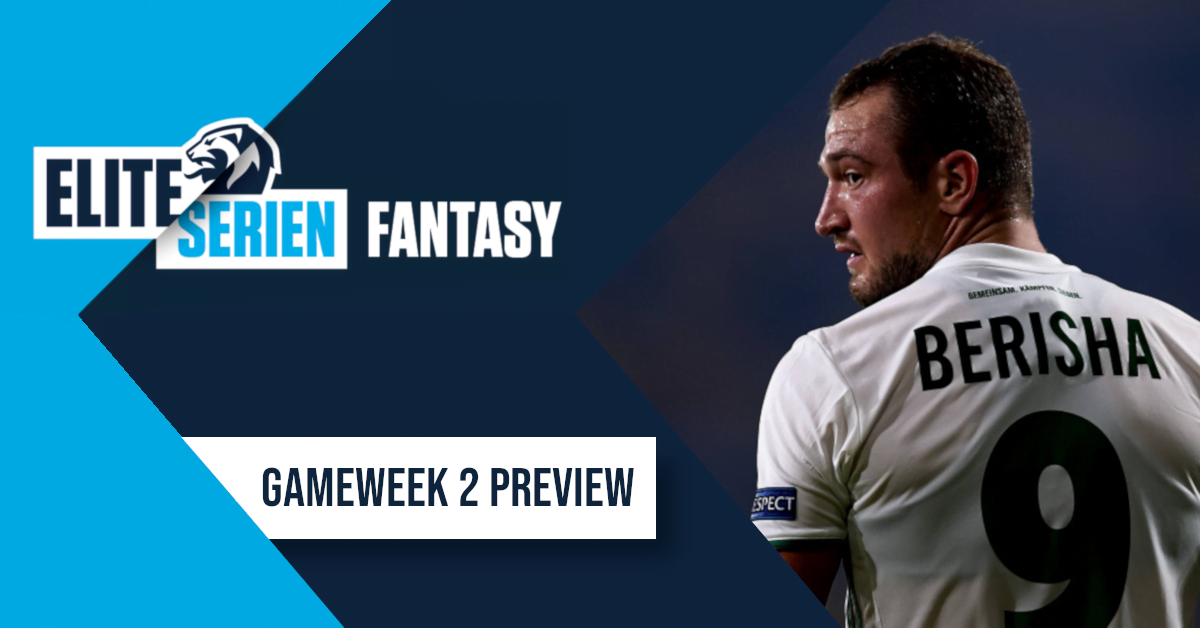 It is slim pickings when it comes to forwards in Fantasy Eliteserien right now, but with a match against newly promoted Aalesunds FK, Fantasy Tipsters’ Jacob Silkstone is expecting Viking FK’s Veton Berisha to be one of the best forwards in gameweek 2.

If this section had a soundtrack, it would be about twenty minutes of me mashing my head into the keyboard, followed by roughly ten minutes of inconsolable weeping. If that sounds like an extreme reaction to taking Alexander Ruud Tveter out of my GW1 draft at the last moment (to fund an upgrade from Eriksen to Brynhildsen), then you probably haven’t been taking Fantasy Eliteserien seriously enough.

Ruud Tveter is in his early thirties and previously had just seven Eliteserien goals in his entire career, so perhaps a first-half hat-trick against Haugesund was a little unexpected. Either Ruud Tveter is very good this season, or Haugesund are very bad… Most pundits think they know the answer. Martin Linnes, Tobias Børkeeiet, and Espen Ruud (who seems well set to carry on hammering in set pieces and dominating the Norwegian top division until at least his early sixties) were the other breakout stars of the opening gameweek. Rosenborg look better than expected, while Molde were in ominously dominant form against Vålerenga and would certainly have won by a larger margin if I didn’t put Brynhildsen into my fantasy team. Bodø/Glimt failed to get off to a winning start, but perhaps they can be forgiven for having one eye firmly on their midweek European game with Roma. Don’t be surprised if there’s some rotation of key players this weekend against Sandefjord.

An injury to first-choice keeper Jakob Haugaard (who isn’t expected back for another couple of weeks) means that Tromsø’s Simon Thomas is currently the only starting 4.0M keeper in the game. He registered a save point in the opening gameweek, and sits in just over 18% of teams at the time of writing. Opponents HamKam have already shown they’re no pushovers, but a trip to North Norway in cold early spring conditions is never easy, and a clean sheet certainly isn’t out of the question.

Newly-promoted Jerv began their inaugural Eliteserien campaign with a win, but they face a difficult away game against Lillestrøm this week. Vetle Winger Dragsnes (5.5M) is the pick of the Lillestrøm defence, with a chance of points at both ends of the pitch.

Viking’s Shayne Pattynama (5.5M) registered two goals and six assists in just 888 minutes last season, and now looks to have secured his spot in the starting line-up. A clean sheet against Aalesund is perhaps a little unlikely, but there’s every chance of some attacking points.

Brice Wembangomo (6.0M) established himself as something of a cult hero at Sandefjord last season, and already has his first assist for new club Bodø/Glimt. His long-term place in the first eleven isn’t entirely secure yet, but this week that’s more of a positive: Sampsted, the other wing-back, is more likely to be pencilled in for a rest between key European ties.

Haugesund were in miserable form on the opening weekend, and things are unlikely to get better as they head to Oslo to play Vålerenga. The home side’s captain, Jonatan Tollås Nation (5.0M) is both the cheapest route into their defence and one of the biggest threats from set pieces (registering three goals and an assist last season).

Staying with Vålerenga, Osame Sahraoui (8.5M) is the most enticing of their midfield options at the moment. With five goals and fifteen assists across the previous two campaigns, he’s expected to kick on this year and have a breakthrough season. At home to Haugesund would be a good place to start.

Magnus Wolff Eikrem (12.0M) has a patchy injury record, but he takes our premium midfield slot ahead of an away game with Strømsgodset. If he stays fit, he might just be the most essential player in the game. Having consistently been one of the best players in Eliteserien over the last few seasons, he’s now been shifted forward into a more attacking role and is at the heart of everything Molde do. Two goals in the cup in midweek indicate that he’s in top form, and he takes the captain’s armband for our Fantasy Tipsters selection. Right now, he’s only in 5% of teams: consider jumping on the bandwagon early.

Given the chance that Bodø/Glimt’s key attacking players will be rested or subbed early, we’re putting our faith in Hugo Vetlesen (8.5M) for the fixture against Sandefjord. Vetlesen only broke into the first team towards the end of last season, but registered a hugely impressive five goals and eight assists in just 1158 minutes.

Initially touted as Pellegrino’s replacement in the Kristiansund side, Agon Mucolli (7.0M) had a slow start to his career in Norway and never fully made a breakthrough last season. On form, though, he’s one of Kristiansund’s biggest attacking threats. They face Sarpsborg at home and then two of the promoted sides in their next three, so this could be the right time to invest.

We’re jumping on a bargain bandwagon and hoping to catch a few price rises from Rosenborg’s Tobias Børkeeiet (5.1M). His heroics against Bodø/Glimt on the opening weekend won’t be repeated on a regular basis, but he remains one of the best picks at his price point.

Last but absolutely not least, our lone striker slot goes to Viking’s Veton Berisha (12.0M). By an overwhelming margin, he was the most popular captain pick in the first gameweek, but his owners had to wait until the final minute of the match before picking up some long-overdue attacking points. Still, he was a constant threat against Sarpsborg, and Aalesund’s defence are unlikely to keep him out for the full ninety minutes. He’s in close to 64% of teams and almost impossible to ignore. 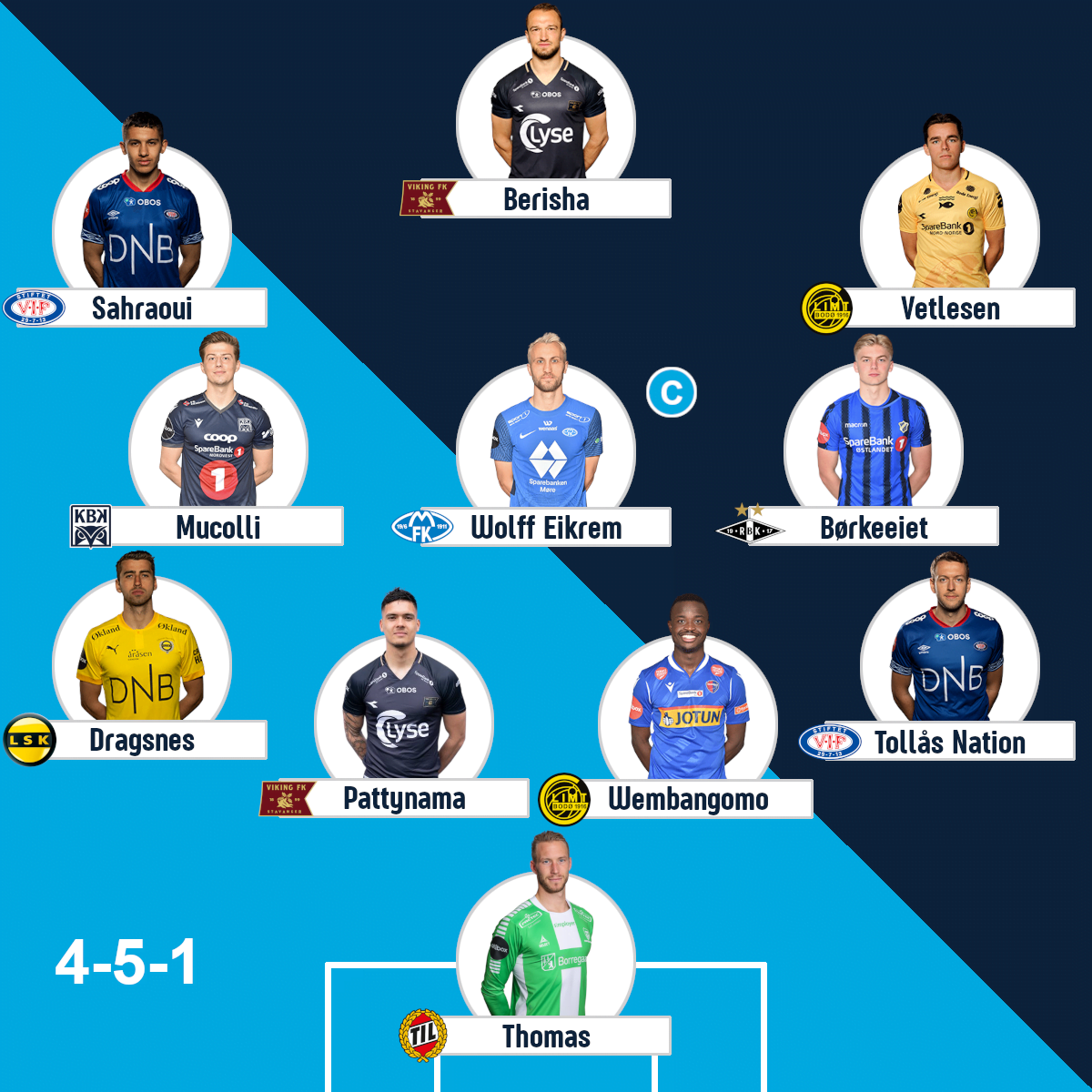