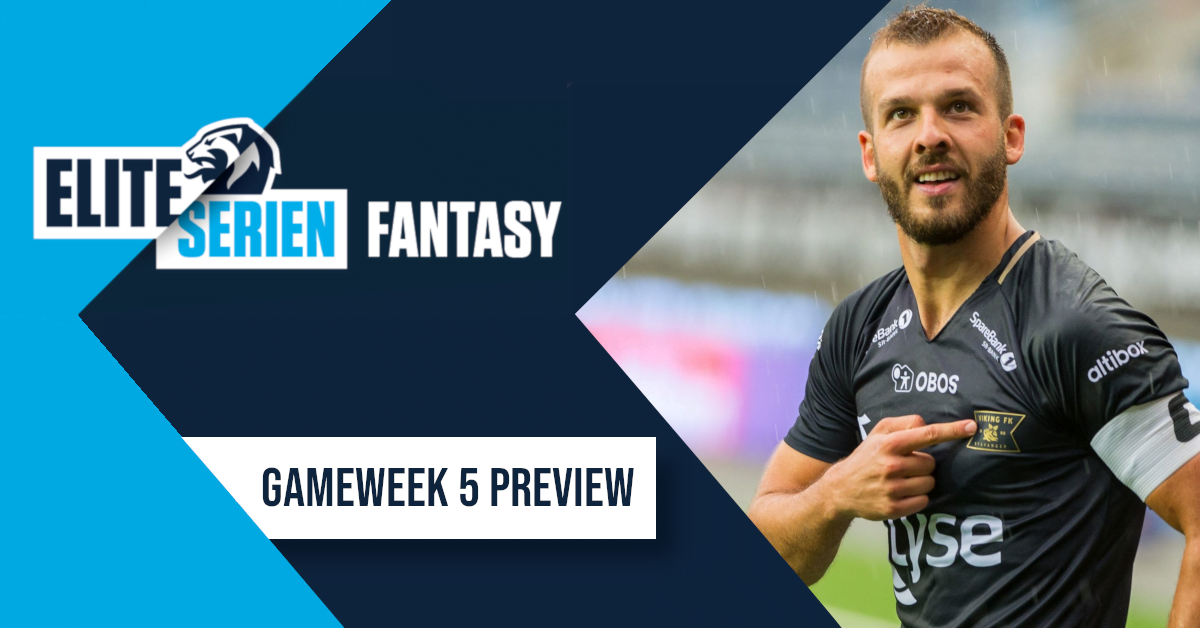 Viking FK’s Zlatko Tripic has been one of the league’s best players. Even though he might miss the first game of double gameweek 5 due to injury, Tipster Jacob Silkstone believes he is still worth a shout in Fantasy Eliteserien this week, pending further news.

The late addition of the Viking-Haugesund fixture to Double Gameweek 4 proved pivotal, with the most popular pick in the game, Veton Berisha, feasting on one of the league’s weakest defences. Berisha’s hat-trick helped him to a total of 22 points for the week – heavy punishment for anyone who’d overlooked him in favour of a differential captain.

Our Team of the Week suffered from backing Lillestrøm’s in-form Gjermund Åsen, who contributed nothing more than a couple of clean sheet points from his two games. We were also wrong to recommend a couple of players from Strømsgodset, who were hammered 5-0 at home to Sandefjord despite finishing the game with higher xG than their opponents.

Even so, hauls from Berisha and Sigurd Haugen helped our selection to a total of 90 points, still comfortably above the overall average of 70.

The main question ahead of DGW5 will be whether or not to use the rich uncle chip. This is likely to be the biggest double gameweek of the season, although rearranged European fixtures could give opportunities to Molde and Bodø/Glimt later in the year. In DGW5, Molde, Odd, Tromsø, Vålerenga, Viking and Strømsgodset all play twice. With most people’s teams already containing triple Viking and at least one Molde defender, the main advantage of rich uncle is the chance to stock up on Molde and Vålerenga attackers. Strømsgodset have two tough fixtures and, after last week’s debacle, can perhaps be safely ignored for the moment. Odd’s fixtures aren’t particularly favourable either, and Opsahl is likely to be sufficient coverage from Tromsø.

Our Team of the Week follows the usual budget limitations, but if you choose to play rich uncle, you might prefer something like this:

With rotation an issue in the Viking defence, we’re looking at goalkeeper Patrick Gunnarsson (5.1M). He has a total of 18 saves so far, the third-highest in the league, and save points in four of his five games. A home game with Strømsgodset seems reasonably likely to end with a clean sheet, even if the away game against Molde almost certainly won’t.

Rotation could well be an issue at the back for Molde too, but Martin Linnes (7.2M) has been the most secure starter in their defence so far. Linnes already has two goals this season, and nearly twice as many fantasy points as anyone else in the Molde squad. While his goalscoring run shouldn’t necessarily be expected to continue, he poses plenty of assist threat too.

We recommended Leonard Zuta (5.5M) last week, and he went very close to scoring in Vålerenga’s win over Jerv. He continues to go under the radar, with an overall ownership of just 2%: his attacking threat is unlikely to stay such a well-kept secret for long.

Including Tromsø’s Niklas Vesterlund (5.5M) is definitely a punt: he has just four points in total from his first four games. However, the eye test suggests that he’s on for a big score sooner rather than later, and the away fixture against Jerv is particularly tempting. Both Tromsø wing-backs are available for the same price, but Vesterlund’s stats are superior to Lasse Nilsen’s so far.

Since our budget isn’t quite able to accommodate the vastly-experienced Espen Ruud, we’re hoping Josef Baccay (4.5M) will provide an equally promising route into Odd’s defence. Baccay is back in training after missing out last week, and is notable for the number of touches he gets in the final third of the pitch. His first attacking points of the season shouldn’t be too far away.

Molde’s Ola Brynhildsen (10.3M) started the season as one of the most popular fantasy picks. Since then, he has 0 goals and 0 assists, and his price and ownership are both plummeting. This seems like one of those cases when it’s useful to step back and realise that Brynhildsen hasn’t suddenly become a bad player overnight: the big chance statistics point to a first goal of the season arriving very soon. Especially on rich uncle, a punt on him scoring this week could be rewarded.

Having missed the second game of DGW4 with an injury, Zlatko Tripic (9.7M) still wasn’t back in training for Viking at the time of writing. However, the likelihood that he’ll at least return for the home game with Strømsgodset means that our advice for this week is to keep but not captain. Tripic’s stats dwarf any other Eliteserien midfielder so far this season, and he’ll be close to essential as long as he stays fit.

Osame Sahraoui (8.5M) is the first of two Vålerenga players in our selection this week. Despite registering multiple shots in the box and key passes, he’s yet to register an attacking return so far. Games against Sandefjord and Tromsø provide two opportunities to put that right. Even without attacking returns, it’s worth noting that Sahraoui has recorded maximum bonus twice this season, giving him more total points than any other Vålerenga midfielder.

Henrik Bjørdal (7.9M) is an equally tempting mid-priced way into Vålerenga’s midfield. He also happens to be their first-choice penalty taker, which significantly increases his fantasy appeal. With an overall ownership of just 2%, he’s another player worth punting on for the double.

Sakarias Opsahl (5.6M) has provided four attacking returns in the first four weeks of the season, and continues to look like the best fantasy option from Tromsø. If you’re not on rich uncle, his price makes him an obvious pick this week. (And if you are on rich uncle, his stats still make him a very, very good pick indeed.)

Another week, another appearance for Veton Berisha (12.0M) in our team. The hat-trick against Haugesund was a devastating reminder of how dangerous it can be to overlook him, and he’s now in roughly two-thirds of teams overall. His effective ownership among active teams this week is going to be well in excess of 100%. He takes the captain’s armband for our team again. 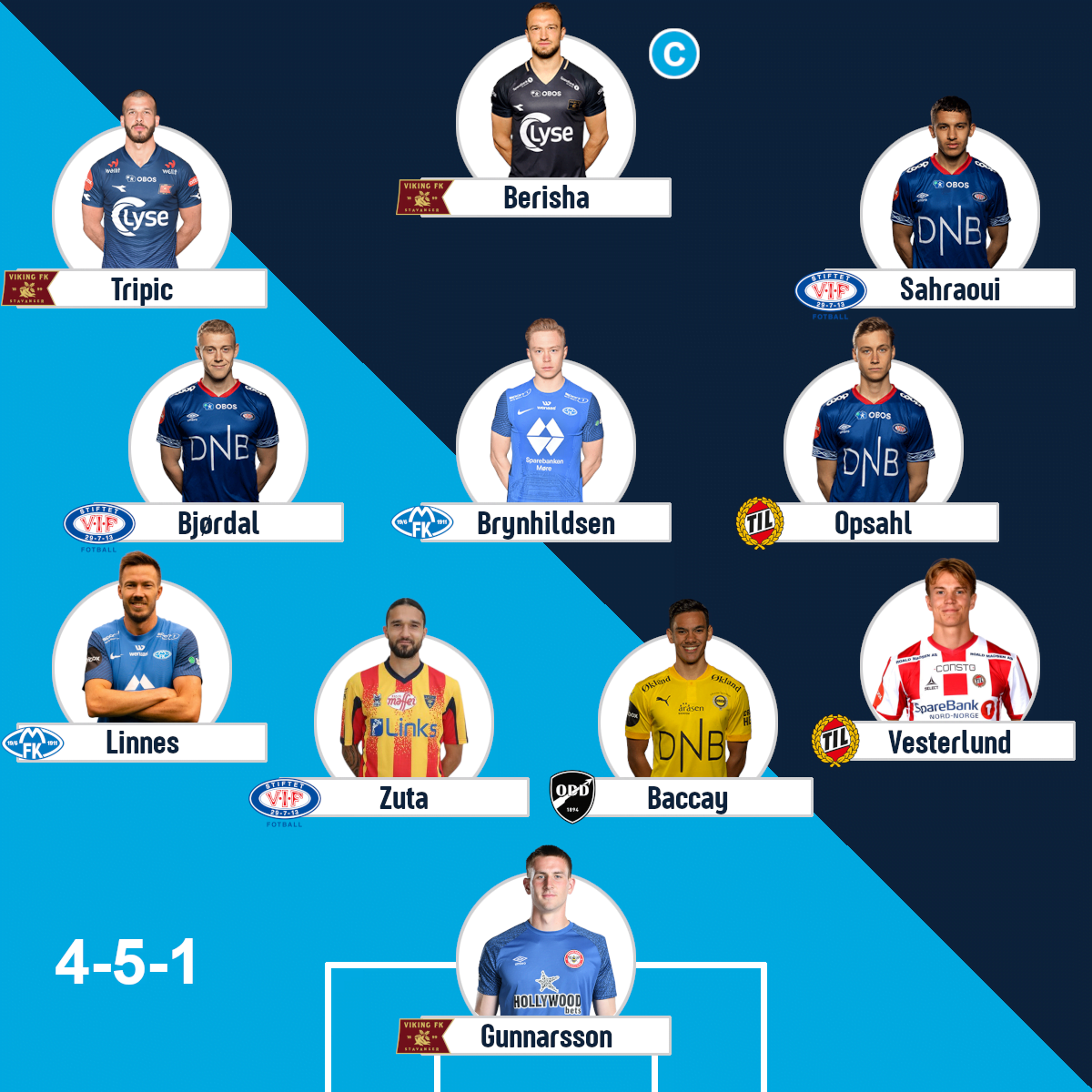