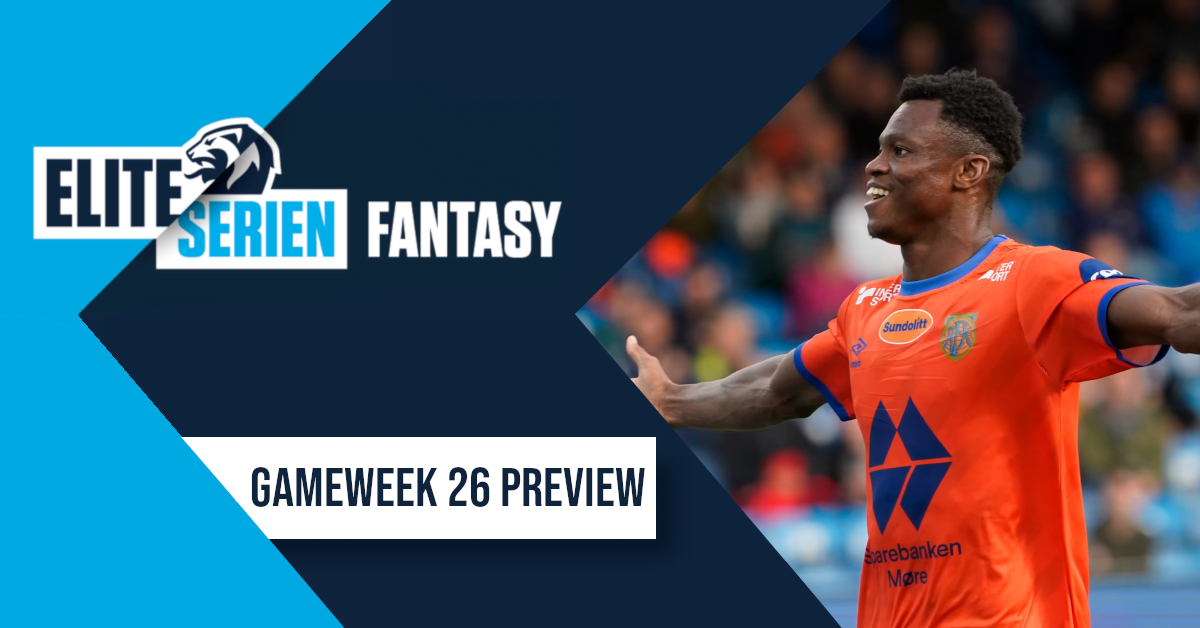 Aalesunds FK might be hovering just above the relegation zone but a round-trip against both of the promoted teams, Jerv and HamKam, makes them prime fantasy assets in Tipster Jacob Silkstone’s Eliteserien Fantasy gameweek 26 preview.

Gameweek 25 of this season might well turn out to be a pivotal moment in the history of Eliteserien Fantasy, but not because of anything that happened on the pitch. Instead, all the controversy surrounded an event that happened long after the final whistle. Amahl Pellegrino was the most popular captain pick overall (as forecasted in last week’s article) and contributed a goal and two assists as Bodø/Glimt eased to a 4-1 victory over Sandefjord. His owners (more than a third of teams overall) must have been fairly confident that he’d receive three bonus points from the ‘man in the stands’. If not three, then at least some…

Instead, Pellegrino got absolutely nothing. Bafflingly, Sandefjord’s budget defender Quint Jansen took two bonus points, while Bodø/Glimt defender Alfons Sampsted took one. The maximum bonus went to Hugo Vetlesen ⁠— not hugely controversial when you consider that Vetlesen scored twice, but some eyebrows were raised when a quick bit of research revealed that the ‘man in the stands’ handing out the points had a fantasy team with Vetlesen and Sampsted, but not Pellegrino.

Given the reaction to that information, it seems reasonably safe to predict that the game will be switching to a new bonus points system from next season, with a little less controversy involved…

Another key off-the-pitch event was the late postponement of Jerv’s game against Aalesund. We’d gone heavy on Aalesund players for our Tipsters selection, and ended up with only eight starters. Even so, our total score of 75 was ahead of the gameweek average (57) and we’ll be sticking with our Aalesund picks for the hastily-arranged double gameweek.

Jerv may have had a tough time in their first season at this level, but no goalkeeper has provided better fantasy value than the heroic Øystein Øvretveit (4.7M). Øvretveit has made nearly 20 more total saves than the second-best keeper, and more penalty saves than anyone else in the league. He also has the third-highest bonus points total among all keepers, and his last double gameweek ended with an 18-point haul. We’re not expecting anything quite as miraculous this time, but he’s certainly crucial to Jerv’s chances if they’re to have even the slightest hope of escaping relegation.

From one relegation candidate to another, we’re going for an unconventional defensive pick in the form of Kristiansund’s Snorre Strand Nilsen (5.6M). Kristiansund looked down and out at the halfway stage of the season, but they’re now unbeaten in their last four home games and showing plenty of fight as they attempt the great escape. This week’s opponents, Haugesund, have won just twice away from home all season and failed to score in two of their last three away games. Strand Nilsen’s underlying stats are a little underwhelming, but he does outrank his defensive colleagues for expected assists and chances created.

Leo Cornic (5.9M) delivered the goods on his only previous appearance in our selection, contributing a goal and an assist in Rosenborg’s thrilling 4-4 draw with Kristiansund. We’re turning to him again as Rosenborg prepare to face Strømsgodset, who have just a single goal from their last three away games (all defeats).

Simen Rafn (4.6M) finally opened his goalscoring account for the season in Aalesund’s last game, and he remains the most likely source of attacking threat from their backline. A double gameweek against HamKam and Jerv is an unexpected boon for his owners (although there aren’t many of them, given that he’s currently in just 2.5% of teams overall).

With our focus mainly on the double gameweek sides, there’s plenty of budget left over for a premium midfield punt. Molde have a tough fixture against Lillestrøm, but they’re just one match away from wrapping up the title and they should have plenty of motivation to get it done as quickly as possible. Magnus Wolff Eikrem (12.2M) has had his minutes managed all season, but he remains a key player whenever he gets time on the pitch. Significantly, he was rested in the midweek European game and we like his chances of a start this weekend.

Tobias Heintz (8.0M) lit up the league with his display against Haugesund last week, and now has eight goals and two assists from his last eight games. He now ranks 9th for expected assists and 12th for expected goals among all active players, and is by a considerable margin the most in-form player in the fantasy game.

Sandefjord’s Mohamed Ofkir (7.4M) was temporarily the most essential player in the game at one stage earlier this season, and he makes a return to our selection with Sandefjord in desperate need of maximum points at home to Jerv. Ofkir is on an incredible run in home games: he’s provided at least one attacking contribution in all of his last nine starts, a sequence stretching all the way back to Gameweek 5.

Both of our Aalesund picks from last week reappear in our latest selection, in the hope that this will be a case of second time lucky. Simen Bolkan Nordli (7.4M) is our midfield selection: as mentioned in the last article, he outranks all of his team mates for expected assists this season.

Confirming our faith in Kristiansund’s prospects of pulling off a miraculous escape, Bendik Bye (6.5M) is our final midfield selection this week. Bye now ranks second in the league for expected goals, behind only Pellegrino, and remains the key component of the Kristiansund attack.

Also reappearing in our selection is Aalesund striker Moses Ebiye (7.3M). Ebiye’s overall ownership is still under 10%, but he’ll be a popular captain pick for the top fantasy teams given the very favourable double gameweek fixtures. With four goals in five games since he came into the Aalesund team, he’s our captain choice too.

Meanwhile, Casper Tengstedt (10.2M) continues his Haaland-esque form at Rosenborg. Another haul last week brings his total up to 17 attacking returns in nine games, with just a single blank so far. He’s been a revelation since his arrival in the summer transfer window, and we’re backing that form to continue against Strømsgodset.

Team of the Week Gameweek 26 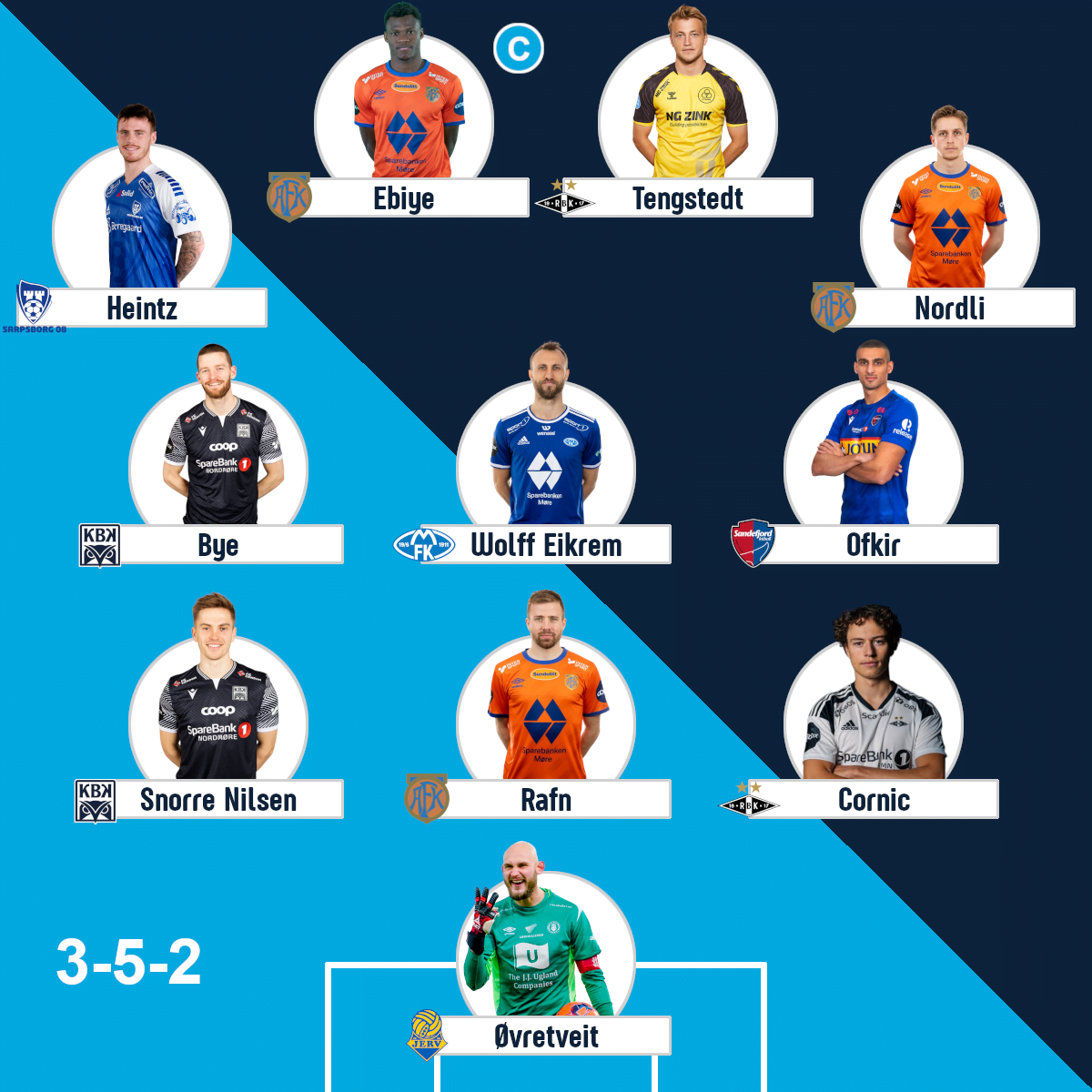